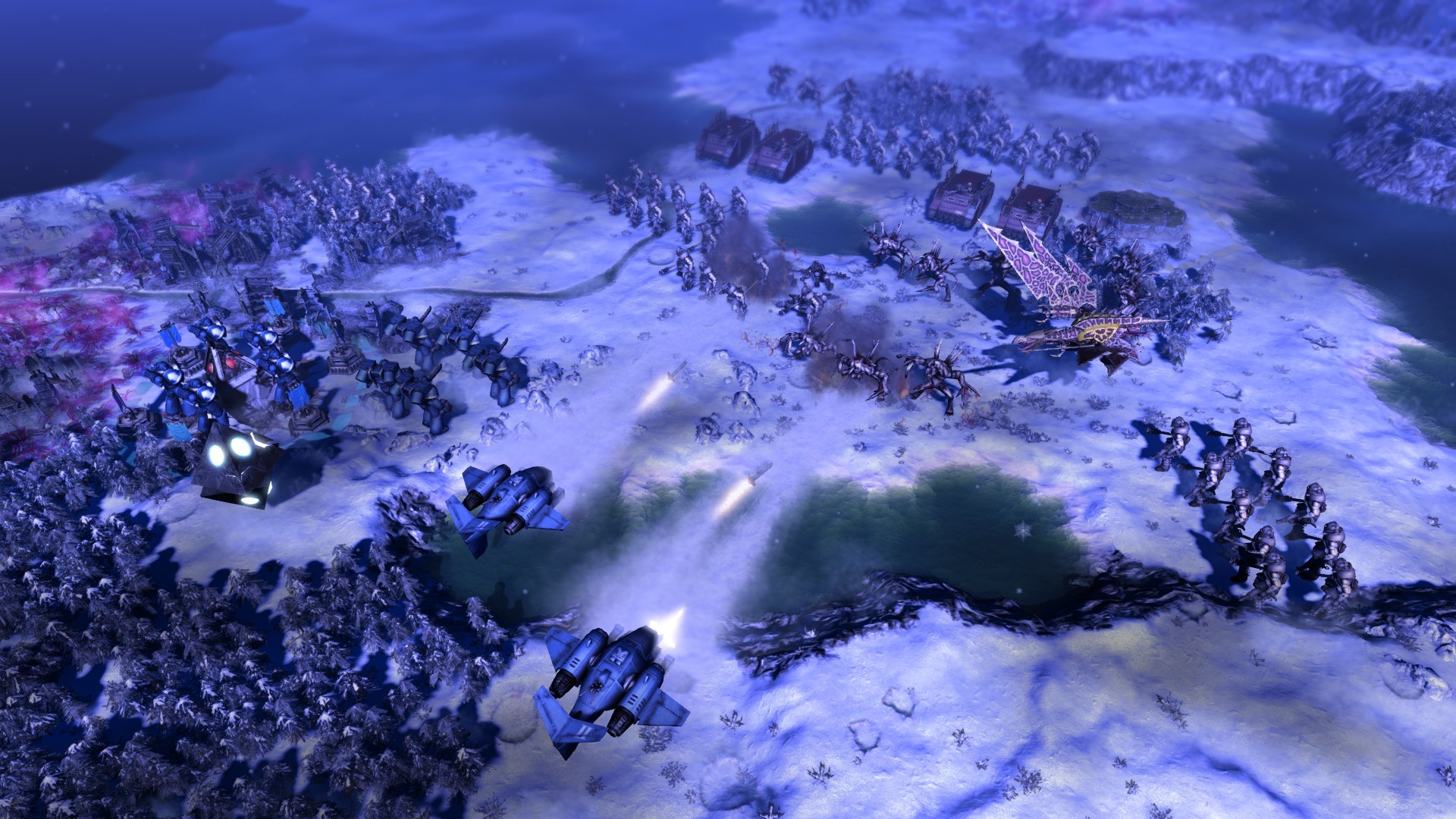 While playing Warhammer 40,000: Gladius – Relics of War, I was reminded of my time spent collecting the miniatures, spending hours upon hours painting and building my army with excitement. Going into Warhammer 40,000: Gladius – Relics of War, I had hoped to recapture that feeling and while I had plenty of moments that rekindled that fire, I had a few too many moments that diminished that excitement far too quickly.

The franchise has evolved and dipped its toes into the video gaming world on more than one occasion from mobile games to the real-time strategy genre with varying amounts of success. Indie developers Proxy Studios’ Warhammer 40,000: Gladius – Relics of War gives fans a fresh take on the franchise that’s the closest I’ve experienced to the tabletop gameplay that’s defined the Warhammer franchise for years, but it’s by no means perfect.

If your planning on playing Warhammer 40,000: Gladius – Relics of War for the plot, you’re looking at the wrong game. It’s straightforward and to the point; Gladius is being ravaged by war, much like everything else in the 40K Universe, go and battle for the planet, that’s about it.

Beginning a match then presents a brief video showcasing some of the excellent artwork Warhammer is known for, and efficiently gives a very brief idea of why the race you’ve chosen has come to Gladius.

It’s not exactly the well thought out and written stories we have seen in the Warhammer universe.

Considering there is so much that could be explored and used to create interesting and dynamic stories, it’s a shame that developers Proxy Studios didn’t think to include a campaign. The extensive amounts of lore that makes up this interesting and expansive universe could have given Warhammer 40,000: Gladius – Relics of War an intriguing and engaging story that fans could get invested in. But instead, it is barely referenced, if at all, at any point except for a brief mention of recent events that have affected the greater Warhammer world, which is nothing short of baffling and a hugely missed opportunity.

What Warhammer 40,000: Gladius – Relics of War lacks in story is made up for – in some ways- by gameplay.

Fans of the 4X genre and games such as Civilization will be all too familiar with the basic functionally of Warhammer 40,000: Gladius – Relics of War, almost mirroring almost every aspect of the former’s gameplay and UI. Thankfully by doing this Warhammer 40,000: Gladius – Relics of War offers a clear interface that can be navigated with ease for experienced fans and newcomers alike, even if it can appear a bit overwhelming to begin with. Thankfully the developers also included a compendium, an extensive and detailed encyclopedia that explains almost every aspect of the gameplay as well as troops and abilities. Pop up tips during games also can help quickly explain aspects of the game and that can easily be disabled for those who find them irritating. 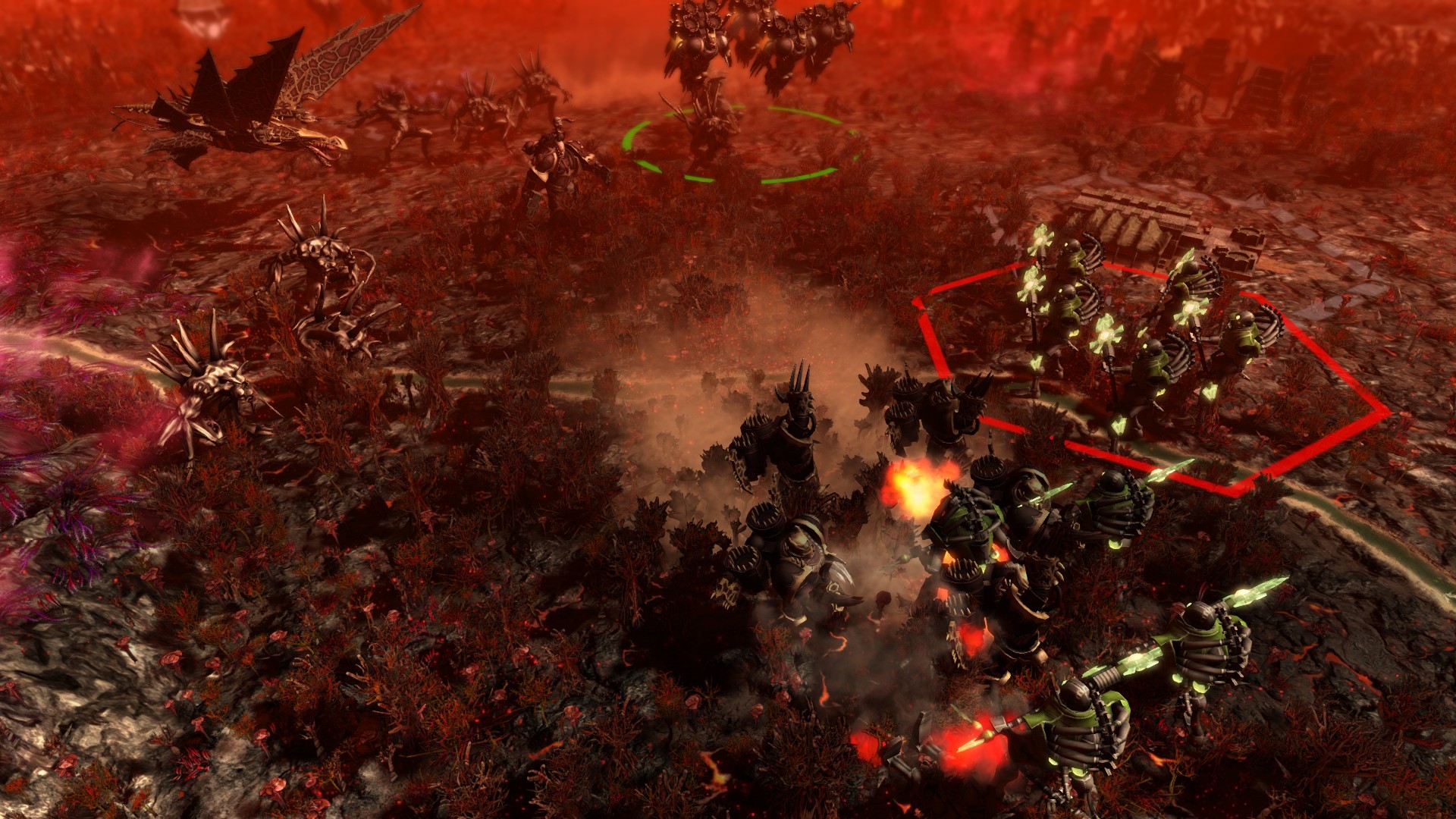 When setting up a match, players will be given a choice of 4 races to choose; Orks, Space Marines, Necrons, and the Astra Militarum with new races available as DLC. Each offers its own unique set of units and abilities that vary the playstyle and difficulty of the game depends on player preference. It’s a shame the same can’t be said for the game modes, which as mentioned offers no campaign but also lacks any real “modes” to pick from, other than the option of online multiplayer with the most amount of variation coming from changing maps sizes and the pace of matches or player count, which can include over 12 players.

The mode I’m most upset that didn’t make it into the game is customization. So many other games that feature the Warhammer IP have included customization options that let you change colours and logos and sometimes even armour pieces to personalize your army to whatever you desire. It’s then a huge disappointment that Warhammer 40,000: Gladius – Relics of War lacks any kind of customization options given so many before like the Dawn of War Series has included this option.

This again feels like a missed opportunity to try something different within the genre, and really take advantage of the excellent IP they are working with. Including objectives, customization or more varied game modes could help break up what can sometimes feel like very drawn out, long-winded games, making replayability somewhat limited if you’re not willing to play the different races or drastically change match settings.

Base building and research and resource management borrows from its friends in the genre, and you’ll find it rather easy to pick up and learn as you expand cities to build new troops and collect resources. It’s not exactly the most thrilling aspect of the game but one that is essential if you want to succeed, and thanks to the clear UI it’s easy to manage and arrange what’s building and what resources are being used and where. It doesn’t however, reduce or alleviate what feels like very time consuming, slow gameplay. Given the absence of mechanics like diplomacy and trading, it seems abit odd to not tweak the base building and development so players can quickly get to battling and army building, considering its the main focus of the game.

The fact that matches feel so drawn out did little to help me really engage in what I was doing. This isn’t helped by the soundtrack which can become a bit repetitive after a while, further adding to what can sometimes become a frustrating waiting game, and at times become too loud and drowned out any other sounds from the game. After a while, I found myself just getting bored with the slower pace in gameplay seeing as I had very little to do unless I quickly tried building an army to engage in combat.

Its a relief then that the combat is solid, with the varied troops and vehicles offering different skills and ways to approach enemies that give the gameplay a nice amount of variety, especially during larger scale battles.

The downside being how long it takes to build a respectable army and the number of neutral world enemies that wander the battlefield. I found myself spending more time dealing with them and stopping troops dying or being stolen by mind-controlling Enslavers before I even found one of the other races which by that point left me at a rather noticeable disadvantage. The game’s difficulty also felt a bit off at times, with enemies sometimes developing considerably quicker than me with more advanced units and research on normal difficulty. Considering this is the third difficulty setting out of seven it felt slightly unfair at times, with higher difficulties proving to sometimes be unbearable to deal with if your not a die-hard player and fan of the genre. 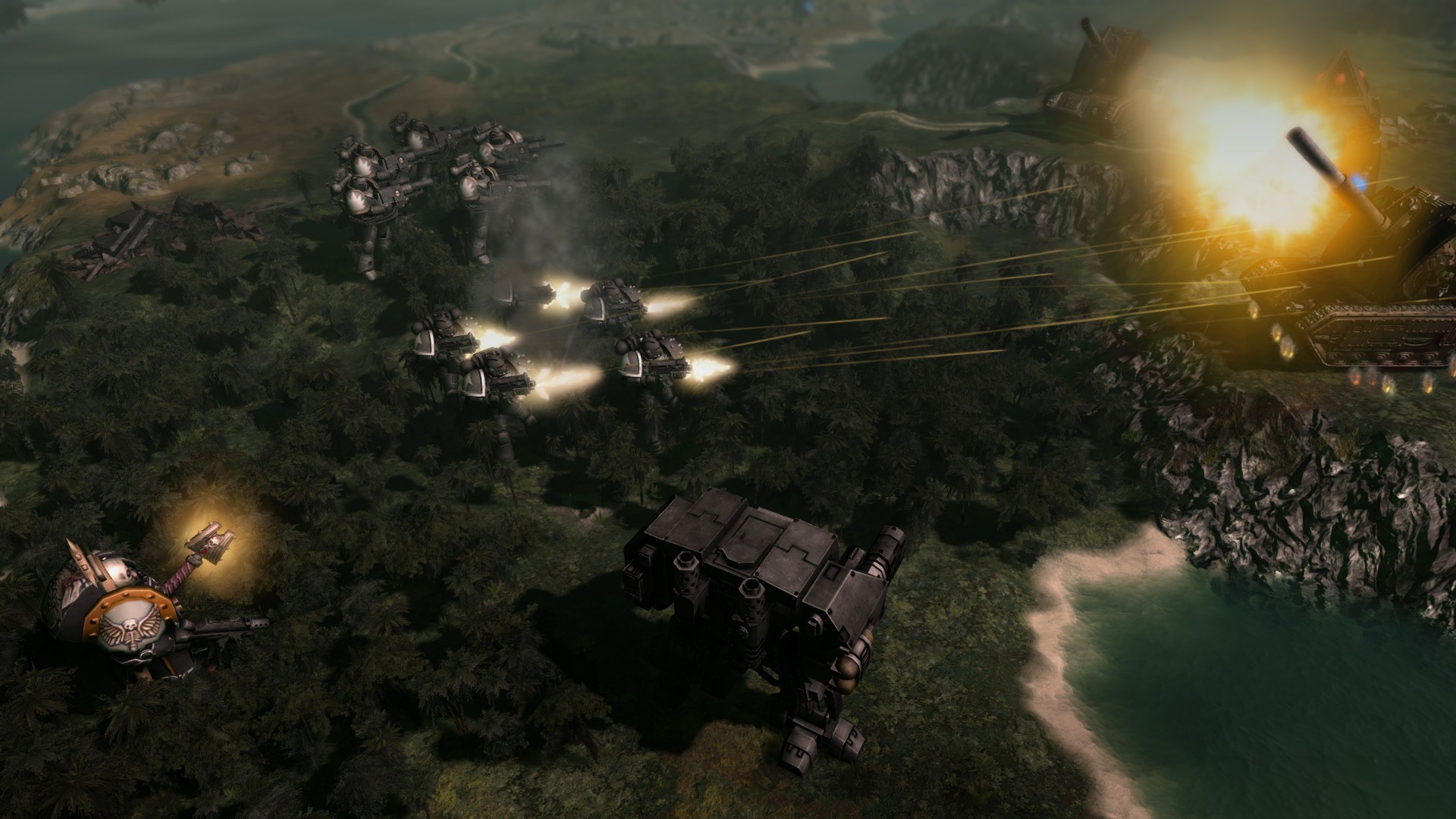 Graphically, Warhammer 40,000: Gladius – Relics of War doesn’t offer anything particularly spectacular, but for this style of game that’s not exactly a deal-breaker. Map tiles have varying textures with good use of colour that gives battlefields a nice amount of variety, with only a few areas appearing abit bland and colourless, while troops and buildings offered abit more detail and for the most part stood out nicely, making the lack of customization sting a little bit more.

For this review, I was given the chance to play one of the DLC races, the Chaos Space Marines. I spent a good amount of my time playing this race while working on this review and compared to some of the others I tried, I found myself enjoying the Chaos Space Marine playstyle. Although the general gameplay is similar to other races – excluding the different racial abilities – Chaos space marines had a nice amount of variation within its troops, with some of the vehicles being particular favorites, offering some of the most interesting graphics and models.

The big standout included some of the unique mechanics that are exclusively for the Chaos Space Marines and fit perfectly with the lore and aesthetic such as the marks of chaos. As you research and progress through matches, you will be given the chance to learn abilities such as marks of chaos, these unique buffs can be applied to certain troops and offers a range of bonus that can help bolster your army, these included increases in damage or health, as well as more movement. Boons also play a big part in the Chaos Space Marines playstyle, as units have the chance to be blessed with buffs that can make for more effective units with some being lucky enough to become a daemon prince, one of the strongest units in their arsenal.

Other notable unique mechanics included the option to sacrifice cultists, the basic chaos unit, at your cities once you had acquired the correct research. By doing this it offered temporary boosts to things like resources, depending on which god you choose to worship, which given Warhammer 40,000: Gladius – Relics of War’s slower gameplay, can often be a nice way to speed up resource gathering or development.

But despite these rather enjoyable changes the Chaos Space Marines offered, it did little to change what ultimately feels like an above-average experience.

Warhammer 40,000: Gladius – Relics of War isn’t a bad game, by any means. But it feels like so much of what makes Warhammer 40K interesting hasn’t been fully realized, and the game ultimately suffers for it. The lack of any real story or campaign seems like a huge oversight and the stripped-down, 4X style gameplay doesn’t quite do enough to merit the exclusion of other big aspects of the genre. Newcomers looking for simpler, more basic 4X strategy experience may have fun with what’s been presented but for fans of the Warhammer license and genre, it may prove a little too lacking to justify the purchase.

Warhammer 40,000: Gladius – Relics of War offers a stripped-down, 4X strategy experience that doesn’t quite offer enough to stand toe to toe with some of its genre sharing friends, and the inclusion of the Chaos Space Marines doesn’t do too much to help that.