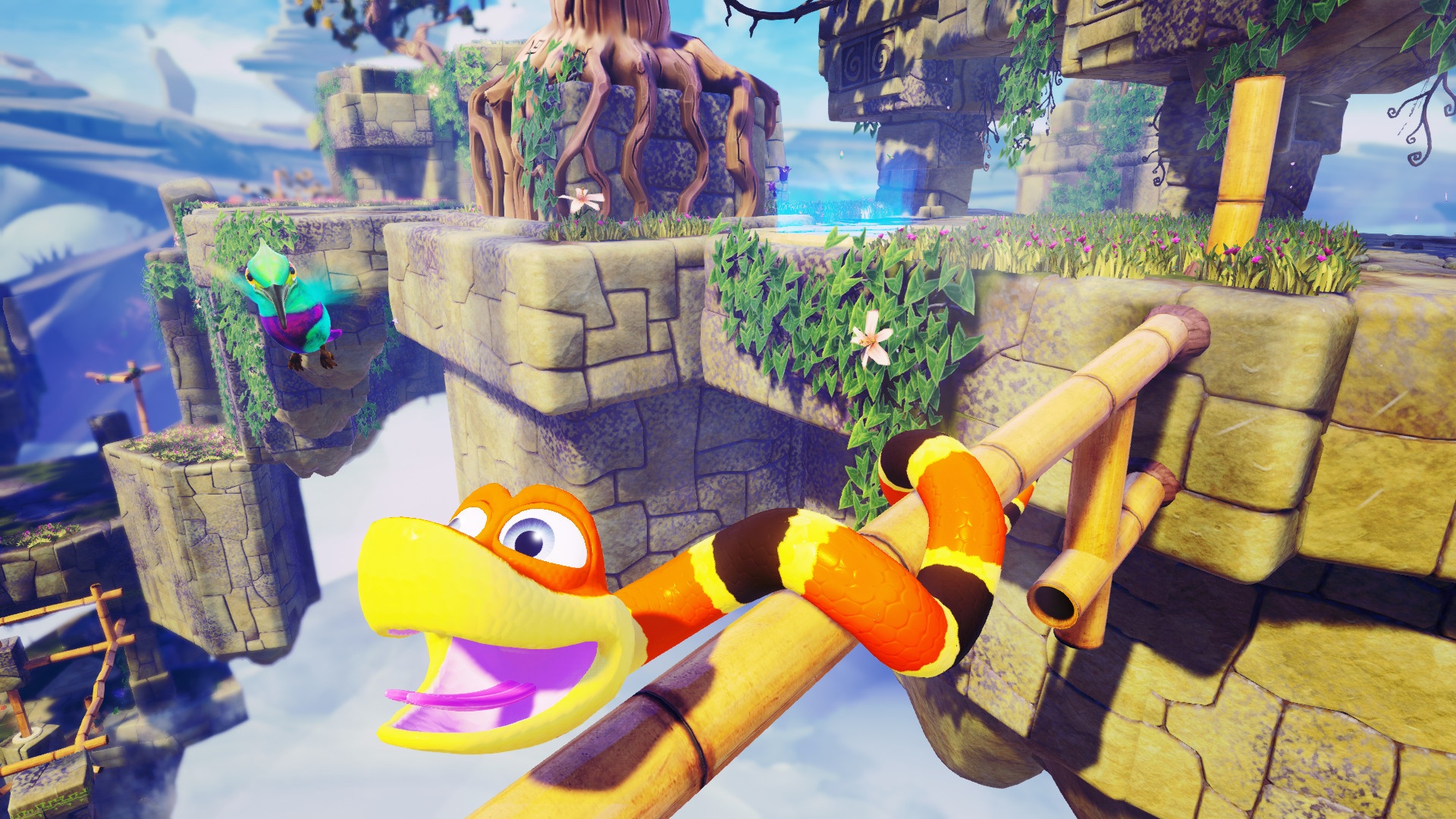 Well, what an interesting time it is for 3D platform games. With Yooka-Laylee reviews beginning to surface and remakes of classic games like Crash Bandicoot being announced all over the place, one could be forgiven for thinking that the humble mainstay of the 32 and 64-bit era might be in line for a comeback. Snake Pass only adds to that suggestion, delivering a beautifully animated, saccharine-sweet platform game with an unusual and significant twist.

And it is quite an interesting twist, because Snake Pass is built around Noodle the snake (and to a lesser extent Doodle, his hummingbird friend.) But, Doodle isn’t some halfway house between snake and man, that walks around on his rump jumping and floating like the protagonist in so many other games that star animals in the lead role. Instead, Doodle moves and acts just like a snake, with the R button used to propel him forwards, and the sticks used to direct his head and control the camera. The A button is used to lift him off the ground, and the other buttons do more complex things such as gripping the object he is currently wrapped around more tightly.

Unsurprisingly, the mechanics of controlling Noodle are at the very centre of the game play in Snake Pass. whilst early levels have him slithering across fields and coiling himself around convenient and fairly safe bamboo climbing frames, later levels are much more challenging both because of the introduction of more complex controls, and because the environments themselves become considerably more complex and dangerous. Unfortunately, there are a few issues, because whilst Snake Pass feels unique and interesting to play, it has camera system that whilst solid, requires mastery of both sticks at the same time to really enable fine control of Noodle. 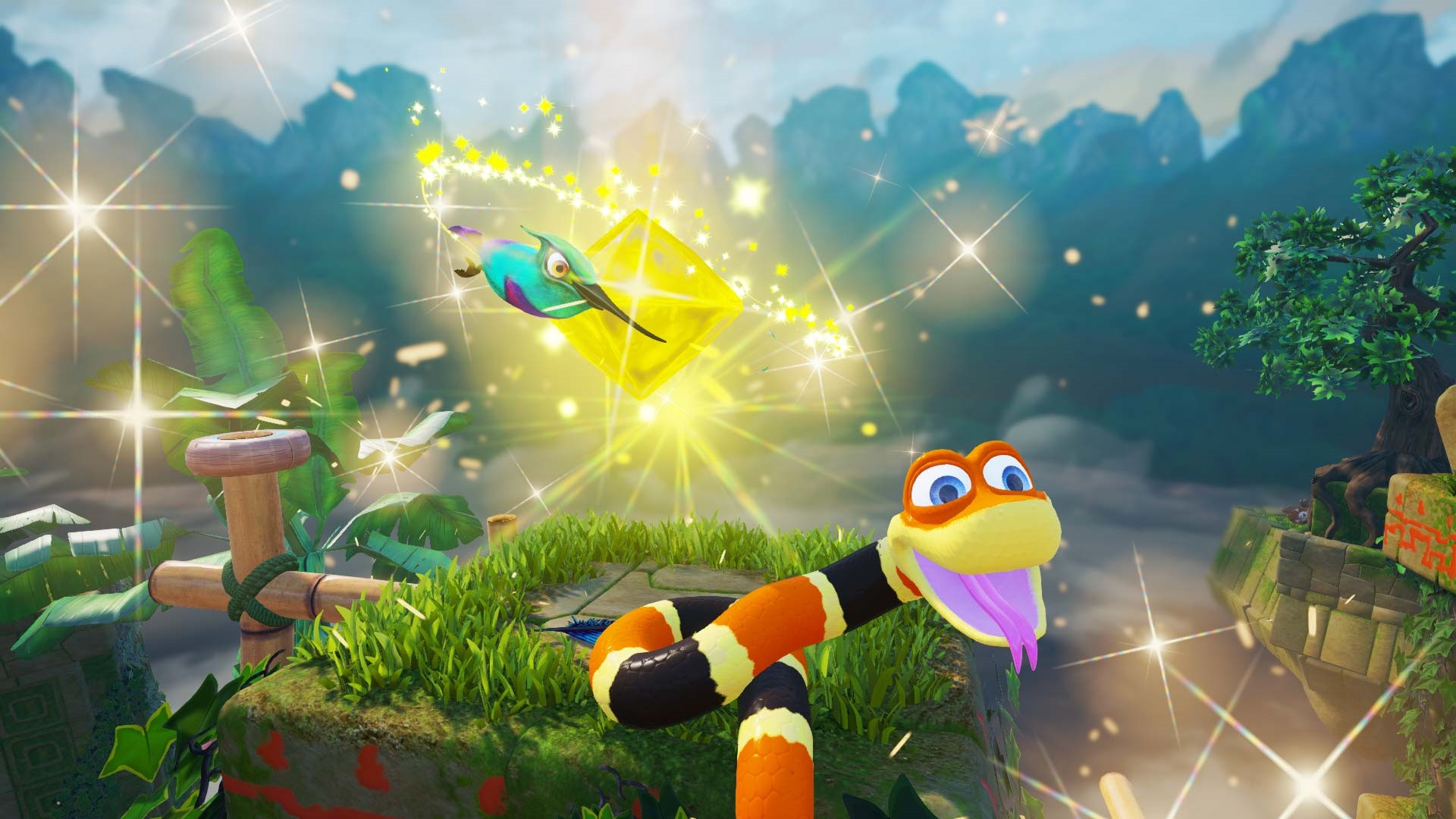 Snake Pass is set in the world of Haven Tor, and features fifteen levels that each (except the first) involve Noodle and Doodle collecting three key pieces to unlock a gate that will allow them to exit and move onto the next level. There are a number of collectibles scattered throughout the game, but I have to say, I didn’t find much point in gathering them except for the sake of completion. The levels are each on the fairly large size, or at least they feel that way because of their layout, which is slowish and challenging to navigate as Noodle.

Even so, I felt compelled to make progress through the early levels because of the sheer novelty. Noodle moves like no other creature I can recall in gaming, and his ability to ascend vertically, horizontally and diagonally lands just about exactly where you would expect it to. His movement looks and feels just like you imagine a snake to move, even to the extent that he kind of reaches away from sheer surfaces as he descends them. There’s lots of cuteness and likeability between Noodle and Doodle too, with Noodle squeaking his distress when he feels he might fall from a high ledge, and Doodle able to fly in and lift up his tail to help take the strain.

Aside from the newness that this duo and their unique control scheme bring to traverse them, the levels don’t bring much variety or interest. The collect three keys and whatever else you can be bothered with mechanism does get quite tired, quite quickly. Not just figuratively, but also literally, because of all the games I’ve played recently, Snake Pass is the only one that left my hands aching. Gripping the R trigger constantly, manipulating both sticks and occasionally holding L, then hitting face buttons from time to time seems like a lot of work to me. This issue is compounded by the checkpoint system in Snake Pass, which can often leave the player with long and tiring sections to replay. 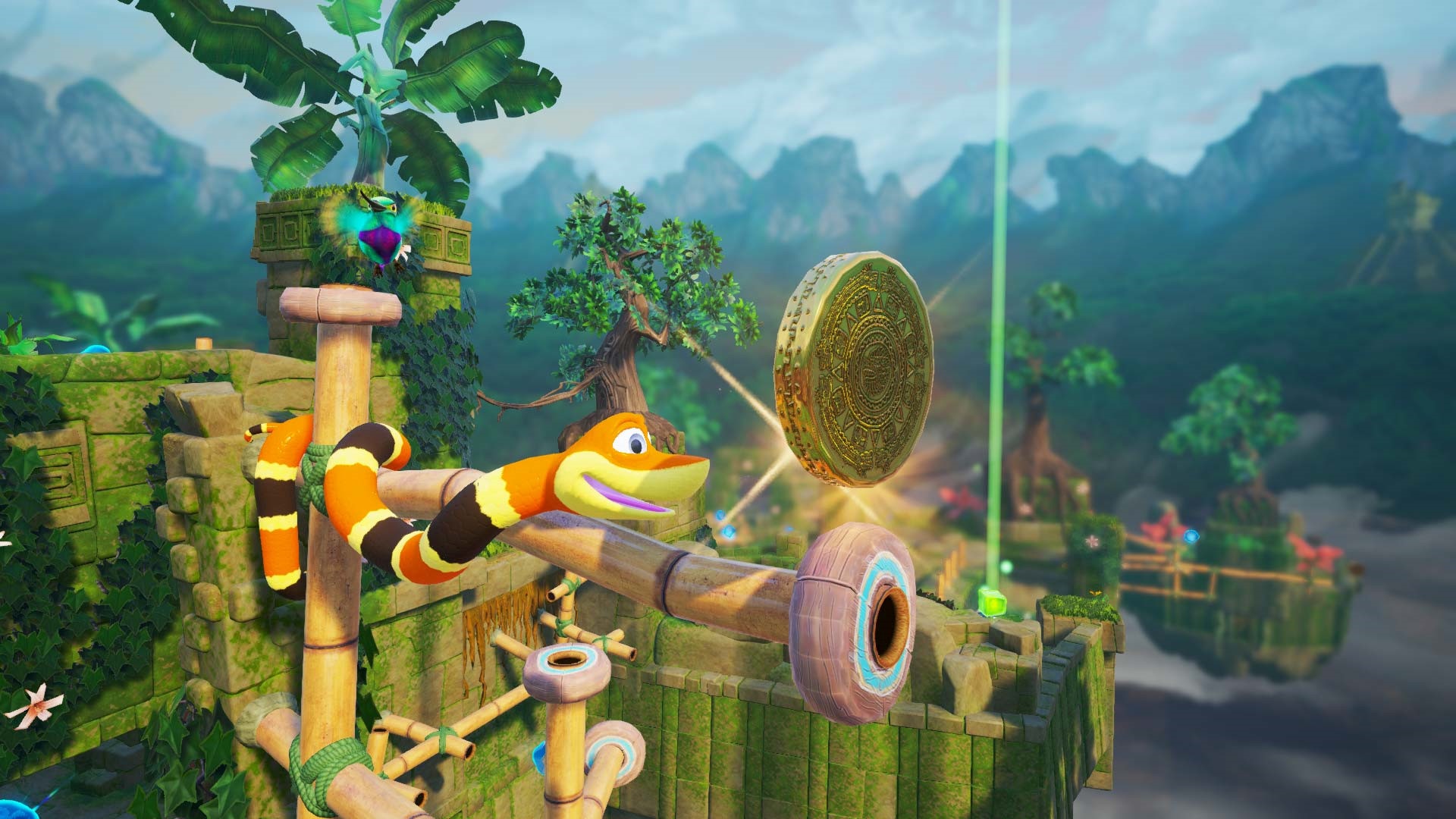 Whatever else I may say about it, Snake Pass looks absolutely gorgeous. It’s bright, bold and beautiful, and Noodle is masterfully animated, especially considering he has an almost unlimited range of movement. Every level is brimming with a thematic combination of lush grass, blue sky, gnarled rock and bubbling lava depending on the setting, and all of the in game furniture feels properly three dimensional and rock solid. The music isn’t quite up to par though, because whilst it is pleasant enough for a while, it soon becomes repetitive and lacks variety.

Snake Pass features no combat whatsoever (which is fine considering the mechanics) but it does little else to entertain and keep players occupied after the first four or five levels. I’m not sure what I was expecting, but genuinely successful 3D platform games like Mario, Banjo-Kazooie and others always had a way of surprising players with a new mechanic that felt instantly familiar inside the construct of the game you’ve already played for however many hours. I’m probably expecting too much from Snake Pass considering it’s position as an indie title, but there is a ton of promise here and I’d love to see what else could have been possible.

Regardless of the few minor criticisms I do have, I enjoyed Snake Pass in the main. The lush, delightful graphics and instantly likeable characters are supported by solid and unique control mechanics delivered in a well realised world. Some of the fifteen levels can take as long as an hour or more to fully explore including restarts and the sparse use of checkpoints, so there’s lots to do. I may not have found much purpose for the Guardian Coins and bubble collectibles, but completionists will want to find them all. At the end of the day, Snake Pass delivers something completely unique in a really solid, attractive package, and for that, I really can’t fault it.