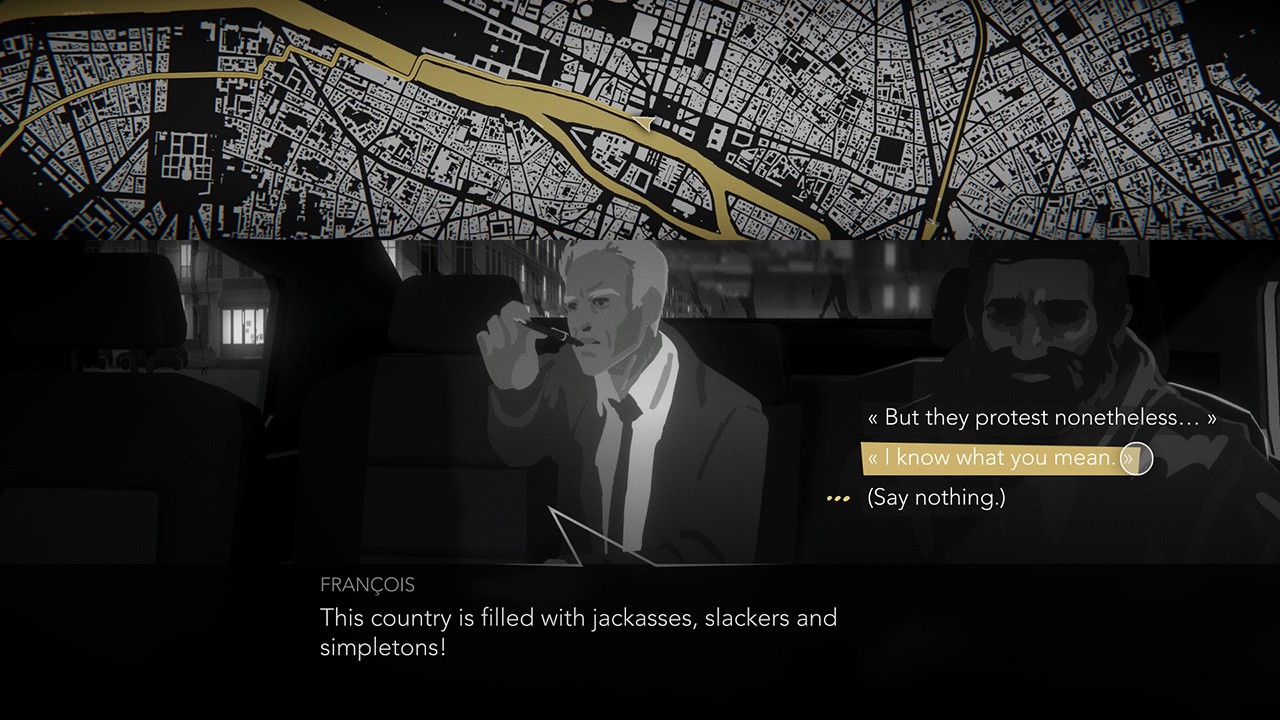 Night Call is an interactive visual novel that follows the story of Houssine, a Parisian taxi driver on the night shift who is blackmailed into being a consultant and detective for the Police. Many serial killers are on the loose in Paris, and it’s your job to help catch them as you are uniquely qualified to do so.

The game has three different investigations which all start with the same premise, the only difference is the number of in-game days you get to solve it. Each different case has varying levels of difficulty as each different difficulty has the victims and the motives either loosely or closely tied together. The game also allows for difficulty selection with a “story” difficulty which allows you to just focus on the narrative and not ‘game’ aspects of micromanaging over fuel or gaining a profit while driving, the other difficulties either just balance the game to be played as originally intended as well as a “hard” difficultly.

The gameplay consists of a cursor controlling everything, using the map to selected clients to drive them and earning money to pay for fuel and leads. Many passengers have clues or connections to the suspect but the best way to investigate is to speaking to informants or friends to concrete and useful information. Other smaller aspects of the gameplay include keeping track of your fuel and making stops at the petrol station for refueling while possibly reading the newspaper to gain clues or listening to the radio in the cab. The way the game challenges you is an energy bar, each action requires a certain amount of time to complete so your working hours must be managed with your Sherlocking hours. All of the clue hunting comes back into your studio apartment where you link up the clues on an investigation board, until the day where the police ask for a name. 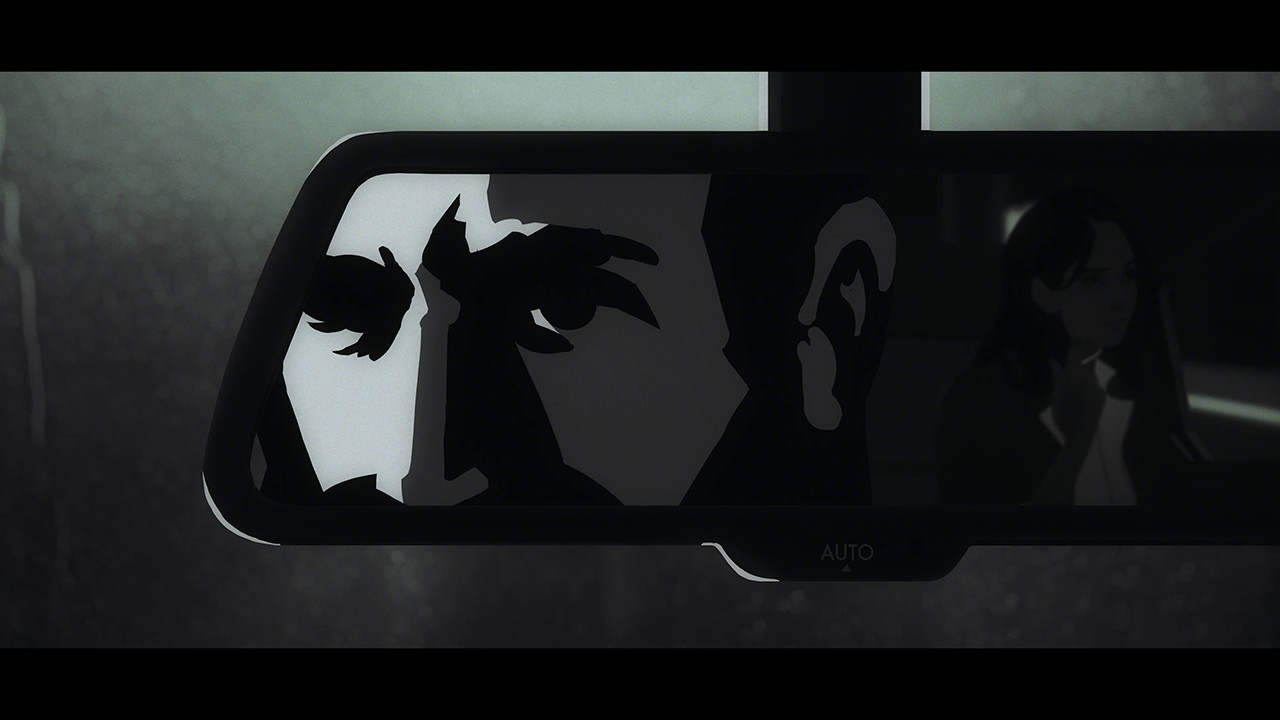 These games rely heavily on the writing and dialogue as the black and white visuals with subtle animations don’t tell the full story. Night Call visually is enthralling, the empty streets of Paris in the early morning, it really does create an enriching atmosphere as the camera pans between conversations with a cast of noticeably different characters like a group of drunk power rangers or a vigilante. Where the visuals fall short is the animations, it seems each character only has 2-4 animations, and as for a game that has the camera is facing a backseat most of the game,  it’s very noticeable to see three different animations change over while driving as it looks a looping PowerPoint slide.

The sound design fits the game well but is still frustrating, the main theme is great for setting the tone of the game and the synthetic waves are anxious and suggest a mysterious world before you.  However, as a taxi driver, you are driving with so many different people that the music would help the immersion if the sound changed to help reflect the current client. For example, one passenger was a DJ and played a song on his phone in the backseat and asked for an opinion, the only ‘hearing’ i did was the inner monologue by the protagonist describing the song which really took me out of the game as hearing it would be so much more engaging.

The characters within the game are rememberable and sometimes reoccurring which keeps you on the edge of your seat to see what’s happened since you last interacted with them. During the game, Houssine experiences delusions of wacky and strange clients who jump in his backseat as to not spoil the story I’ll share one, that group of zany characters includes a ghost whos haunting Paris after being dead for years and occasionally is in your backseat giving you historical information of Paris, including events like the French Revolution which started in 1789. 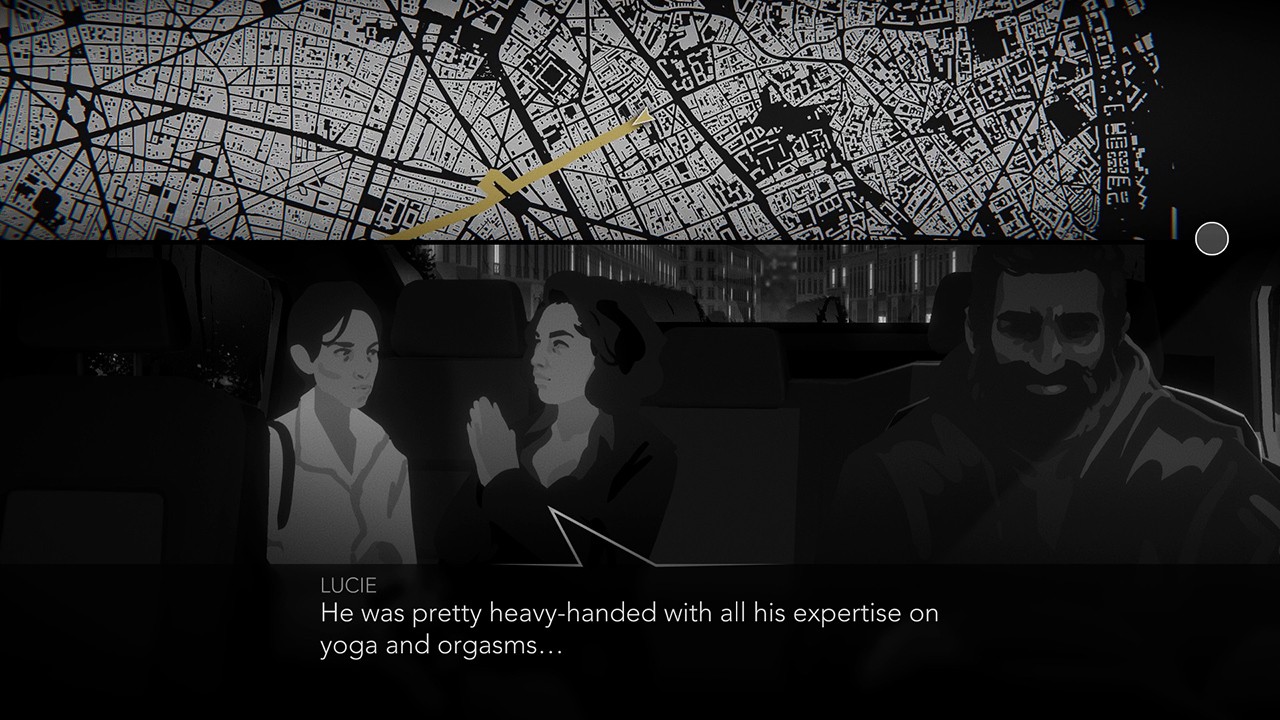 The detective work all comes down to picking your suspect, using the clues you’ve gathered to pick someone as the killer. As you select who you accuse the game has 2 options, you get it wrong and then get sent back to the night before. Or you get it right and you have to sweet-talk your way into getting them to confess in the cab. This comes with many twists and turns and it’s on you stay alive and get them arrested.  Unfortunately, all the cases act this way, making playing through all the cases extremely repetitive, additionally people you’ve arrested in the past come back as clients so each case seems to be in its own separate universe which drew me out of the story.

The other mode mentioned previously ‘Free roaming’ is just picking up clients and talking with them. This is a stress-free version of the game to play with no micromanaging or deeper unfolding story behind it, it seems like an end game reward for dedicated players to continue playing if they so choose.

Overall Night Call is an engaging narrative with repetitive gameplay loops, the visuals and sound show promise but doesn’t live up to the noir fantasy that I expected. It’s definitely worth trying if you’re into solving crimes and enjoy narrative-based games with point and click controls.

Night Call is a narratively based game set in Paris, you play as a taxi driver trying to solve a string of murders. The game has some shortcomings with actual gameplay but the story keeps you mostly distracted from the issues.