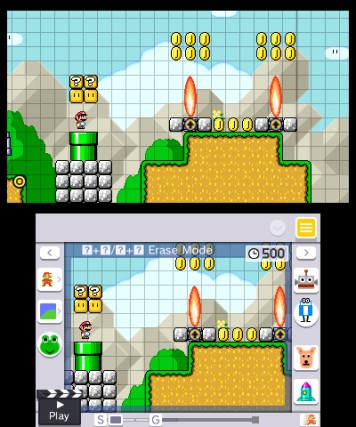 Mario Maker on the Wii U is an exceptional video game, one that arguably delivers the finest level creator of all time. Yes, there are plenty of games out there which provide a much greater sense of freedom and a more comprehensive set of creative tools, but none have managed to marry creativity with accessibility in the same way that Nintendo did for Mario Maker. Sure, you can create all sorts of genuinely bizarre and exciting creations on LittleBigPlanet, but man, you’re going to need a whole lot of patience and even more in the way of spare time. Then there is the little matter of LittleBigPlanet being, well, it’s a bit rubbish isn’t it. It looks lovely and is bursting at the seams with charm, but have you actually taken the time to play it? It’s competent. Yeah, that’s about as nice as I can be. Super Mario make though? It plays exactly how you would expect – exceptionally. And while there are definitive limitations to its creative capabilities, putting together a competent stage of your own making is surprisingly easy. Sure, the sky is the limit for those willing to take the time, but in terms of simply creating a playable and aesthetically pleasing stage, Mario Maker is in a league of its own.

The same is very much true of the 3DS version which, despite a very slight downgrade to the visuals, remains a gorgeous looking and utterly charming experience. The creative tools are here and, unlike the Wii U version, are largely unlocked right form the off. There are a few bits and bobs to collect as you progress through the exceptional pre-created stages, but for the most part, you are imbued with full suite of creation tools right from the off. Problem is, while the tools to create imaginative stages are all here, the options for sharing said creations are painfully limited. You can share created stages locally via the 3DS’ wireless mode, but there are basically zero online options across the board. You can download stages created by Wii U owners, but the stages imported are all but random and don’t always work – it kind of defeats the point of it all. The amiibo support has also done a vanishing act – so no more of those great crossovers that saw 8-bit Link going rogue in the Mario universe. It’s a real shame as the tutorial (including one of the best virtual pigeons of all time) is better than ever with the actual act of creating stages subsequently feeling more user-friendly than ever did on the Wii U. 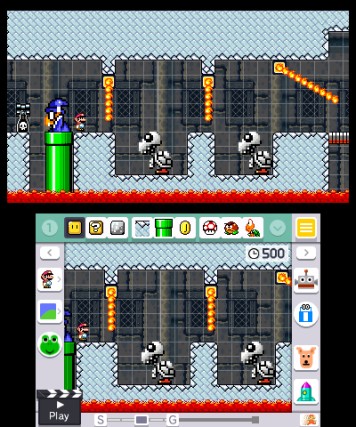 Disappointing omissions for sure, but you know what? I don’t really care. Ok, I do care a bit, but honestly, creating always seemed like hard work to me (pigeon or no pigeon). I enjoyed the Wii U version more for the stages created by other users and its own selection of very enjoyable Nintendo created stages. I fiddled around with the creation tools, but it was never long before I went back to playing other people’s content. Yes, it was inevitably a massively mixed bag, but the best of it was brilliantly imaginative and often extremely challenging. This won’t be the same for everyone of course – some will inevitably be hugely disappointed by the lack of level sharing, but me, well, I just want to play brilliant Mario stages, something that the 3DS iteration has in abundance.

The Wii U version already had a pretty decent selection of Nintendo created stages via the brilliant 100 Mario Challenge, and while that returns for the 3DS version, it is the all new Super Mario Challenge mode that undoubtedly steals the show. This mode delivers some of the finest and most outrageously inventive Mario stages created in recent times. With 18 four stage worlds to complete, there is plenty of brilliant content here with this mode making particularly brilliant use of Mario Maker’s more irreverent approach to the Super Mario universe. 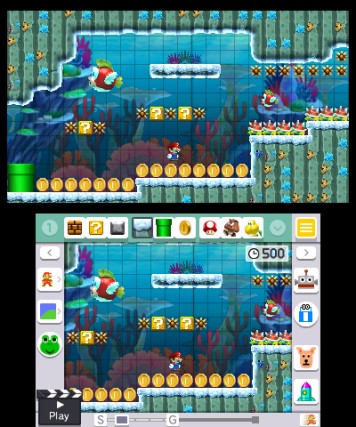 All created with the tools available to every player, not only do these stages provide a great sense of inspiration for those keen to take on the creative challenge of building their own levels, but they each provide an exciting and genuinely unique challenge in their own right. Each stage might be relatively short, but with two and often very creative sub-challenges to complete, I often found myself hooked on a particular stage for what felt like hours on end (seriously, some of these challenges are absolute nails). Switching between each of the four graphical and mechanically unique styles as you progress (Super Mario Bros., Super Mario Bros. 3, Super Mario World & New Super Mario Bros.), Super Mario Makers’ Challenge mode proves challenging, exciting and innovative from beginning to end, and with each stage shorter than your average Mario level, an absolutely perfect fit for handheld gaming.

Of course, the ability to download Wii U created stages is great and the 100 Mario Challenge remains highly enjoyable, but honestly, the Super Mario Challenge mode is worth the price of admission alone. Yes, there is no getting over the fact that the online options are incredibly basic and that being unable to share creations online is a huge omission for a game that was seemingly created with that specifically in mind, but if you are willing to overlook the limited options for sharing, Super Mario Maker for Nintendo 3DS remains one of the finest Mario games of recent times and arguably one of the best 2D Mario games this side of the Super Nintendo. All four styles look absolutely gorgeous (especially on the 3DS XL), and with the shackles of creative design loosened by the games’ inherently irreverent design, Super Mario Maker for Nintendo 3DS proves yet another sterling addition to the 3DS’ increasingly exceptional library of games.