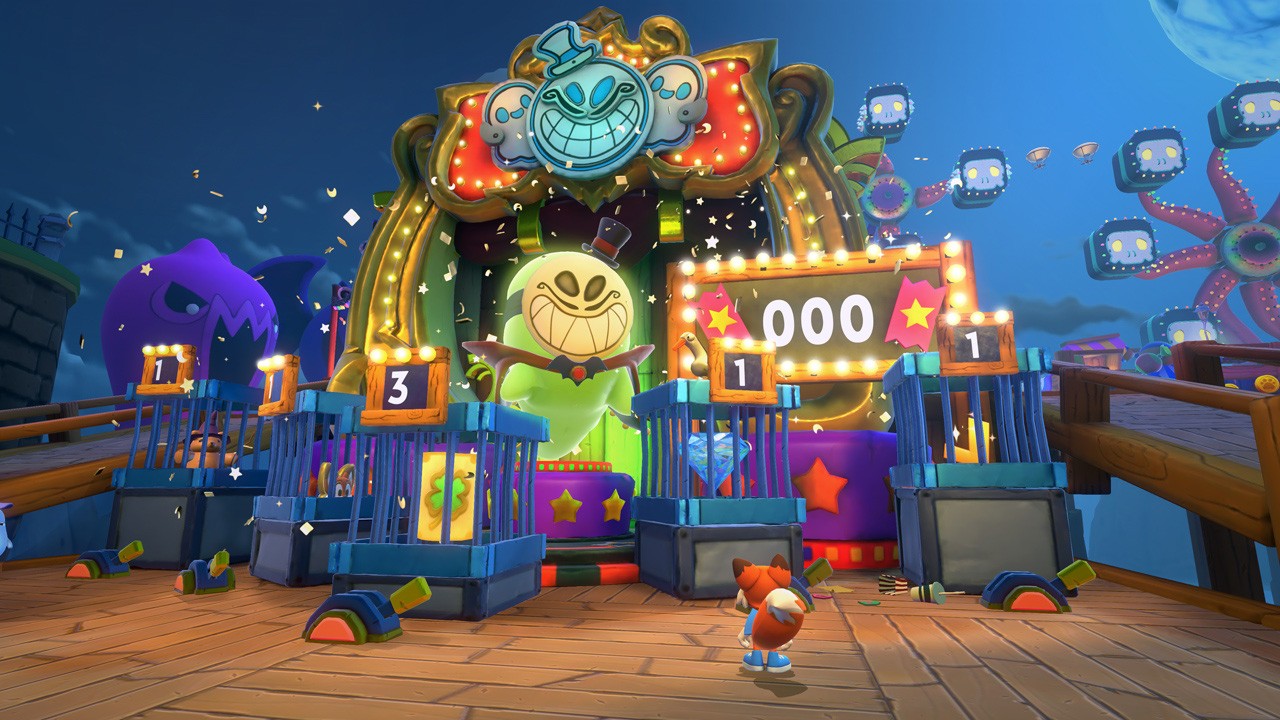 As weird as it might be, I think there should be a new game genre: “Mario 64.” Yes, the idea of 3D platformers already exists (and technically existed before that title), but just the number of games that I’ve played that have specifically tried to capture that game’s spirit, elements and style is staggering. Some, obviously, have been better than others, but it almost gets tiring seeing people attributing this 23 year old game as the primary influence. Almost. You see, what makes this a fun exploration in attribution is how people then utilize and exercise this comparison. For example, Yooka-Laylee was spiritually driven by Banjo-Kazooie, which certainly had some notes from Mario but wasn’t a direct reference. Unboxed had a lot of nods towards the plumber, yet managed to maintain it’s own sense of style (though the port still could have been tighter and neater). Now, we have yet another gift from the Microsoft team, which helped to publish the original version of Super Lucky Tale (created by Playful Corp) onto the XBox. The Switch gets a brand new, shiny and beautiful version with New Super Lucky’s Tale. In a word? Brilliant.

Lucky is the name of a cute, bushy-tailed fox who seems to be caught up in a scenario that most foxes do not encounter. Lucky and his sister are from a world where anthopomorphic animals are everywhere, and the foxes, specifically, are in charge of guarding an ancient artifact called the Book of Ages. This mean cat named Jinx wants the Book all to himself in order to create some kind of dark, awful reality. For a long time, Lucky and his sister outran Jinx and his Kitty Litter (a squad of insane cats with their own nefarious identities). Then, when all seemed lost and Jinx had backed them into a corner, something truly bizarre happened: the Book of Ages tore itself apart, scattering the pages within to the four winds and sucking everyone of those cats and Lucky inside of itself. Lucky is now trapped within the book, and the only way to escape is to assemble all the lost pages and restore the tome. Lucky needs to work fast, however: Jinx and his Kitty Litter are still very much in here, and pursuing the pages themselves. It’s a collectathon race against time to see who will be victorious! 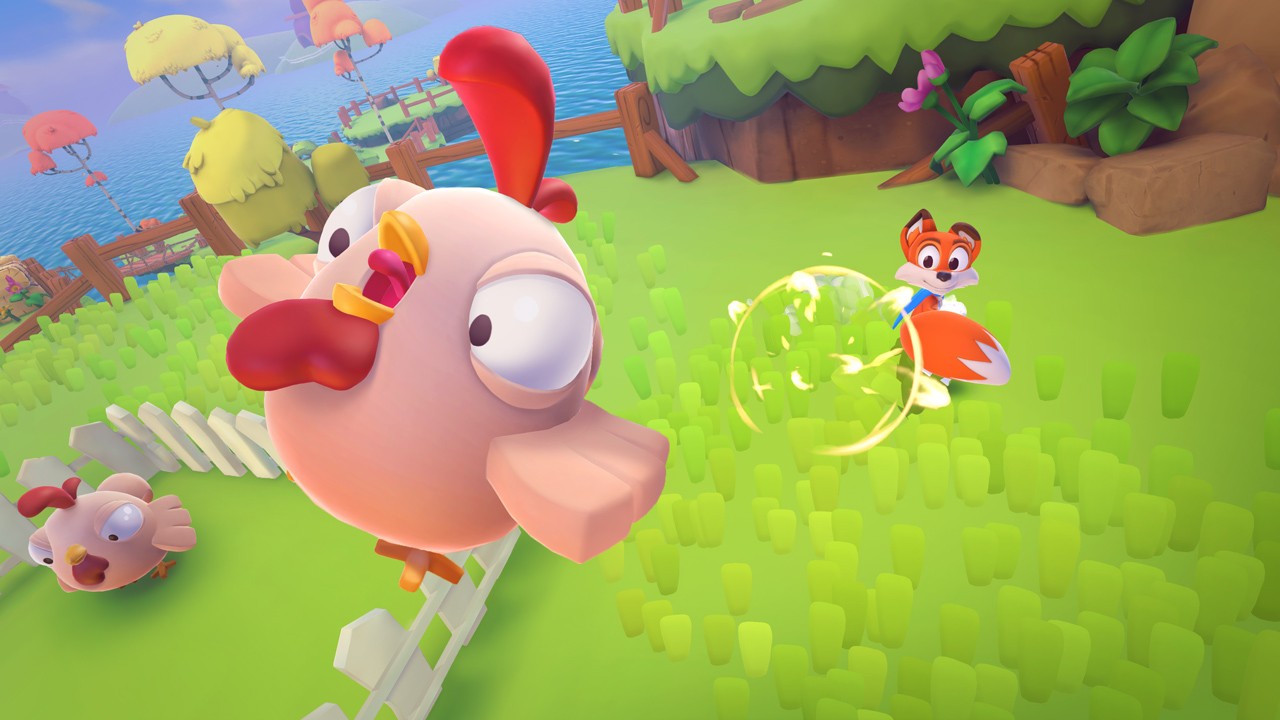 As one might imagine from my introductory paragraph, New Super Lucky’s Tale is a 3D platformer with a big atmospheric twist and several additional level twists. While needing to navigate a 3D world of ledges, bridges and narrow pathways is certainly a key element, Lucky’s trip through the Book of Ages is anything but static. Sometimes the game throws a sidescrolling, 2.5D level at you that gives you a chance to explore in a more narrow field. Sometimes you have to do marble puzzles, where Lucky is the marble and you seriously need to not go over the ledge. Then there are the boss fights, in which you need to adapt to however the Kitty Litter (and, eventually, Jinx) decide to set themselves up for you. Master Mittens, the first Kitty, asks you to dodge a series of fire blasts and then launch enemies at him with a carefully timed tail swipe in order to defeat him. The levels are always interesting and exciting, crafted to help match the theme of whatever World you happen to be visiting.

To his credit, Lucky is no slouch either. While this is his THIRD game (the first being an Oculus Exclusive and the second being XBox only), Lucky’s moves are familiar but still unique to the character. He can run around, jump and double jump (as long as jumping is an option in the level) and also attacks enemies with a tail spin that may completely knock them out, but could also merely stun. Lucky also spends a bit of time digging (foxes are fantastic diggers, just ask Roald Dahl) which is important for evading enemies, getting into buildings/cages from underneath and finding various buried items. Lucky handles like a dream: I never felt like he was off target or too touchy when it came to landing on floating platforms, evading enemies in tight spaces or trying to get colorful coins before the time ran out. Which is a good thing, because the name of the game here is collecting.

If you’re not a fan of completionist collecting, then New Super Lucky’s Tale might not be for you. If you are, then you’re in for a serious treat. Every level tends to focus on obtaining necessary pages, and you’ll usually have four to get. Three of the pages are old hat for fans of these sorts of games: collect enough coins, get the five medallions that spell LUCKY, and complete the stage. There’s also a fourth, “hidden” page that usually comes at the cost of finding a secret puzzle to accomplish and doing that. You need to get a certain number of pages in order to unlock the boss door and fight the Kitty Litter commander of each world, so you can’t merely burn through the level as fast as humanly possible. On the other hand, the game isn’t terrifically demanding or evil about the collection: you’ll certainly be able to clear each world without going full grindstone. Naturally, there’s plenty of incentive to do so (feeling good, certain unlockable extras, more coins means more clothes) but the game wants you to move along at YOUR pace. Don’t feel pressured to do everything, just do what you want to do. 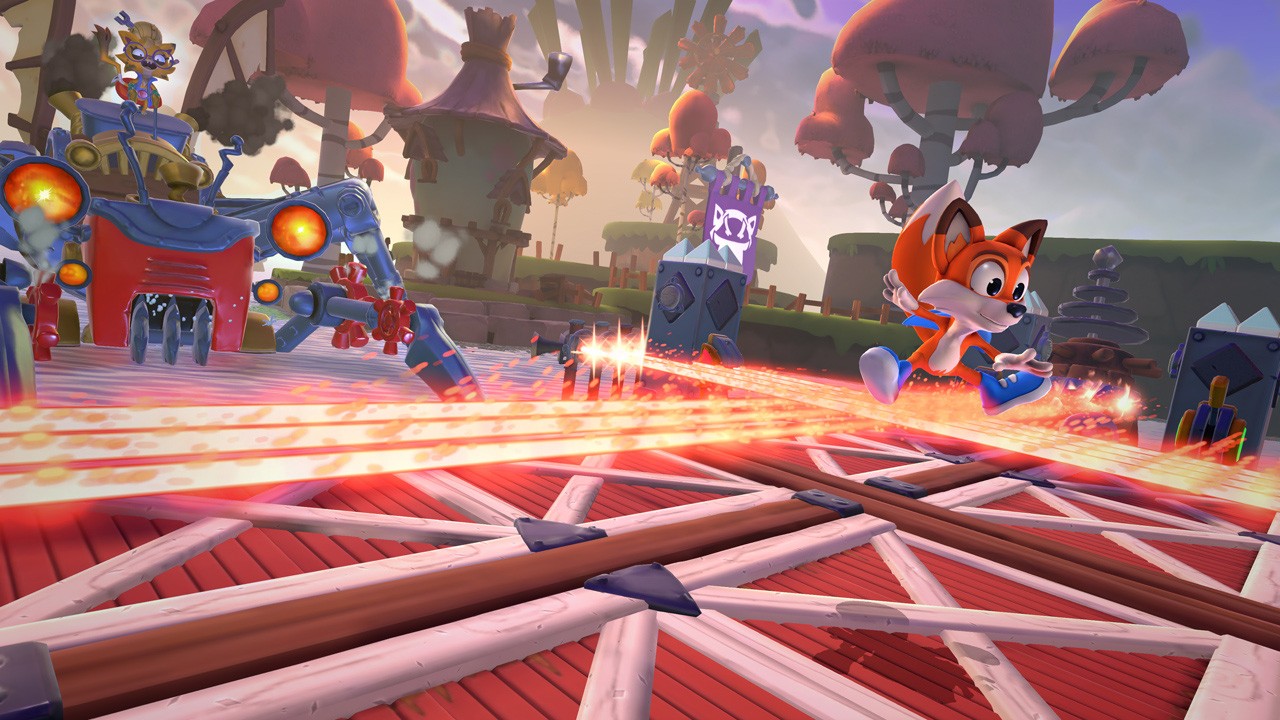 At this point, someone is probably going to bring up how easy New Super Lucky’s Tale is compared to other games in the 3D platforming space, and those people can go play another game, then. This game was far from crazy easy, and it felt like it was embracing the degree of challenge that would best suit the protagonist himself. Lucky is an adorable character, and the whole world is done up in bright colors, pleasing shapes and cute, memorable moments that entice you to keep going to see what could be coming next. The different golems are so sweet, and the different Kitty Litter members are clearly supposed to be bumbling bad guys, but they never lean too far towards “not menacing at all” or “far too scary.” The game delivers in terms of visual stimulation and gameplay that matches the ideas in my head of what this game should be for Lucky. It’s so whimsical in music, filler voicework (no actual script outside of the sister but plenty of sounds) and atmospheric design that it risks becoming saccharine, but never quite falls that far on the scale. It’s beautifully balanced, and the end result is something that becomes enjoyable, memorable and even recommendable.

New Super Lucky’s Tale is a three part delivery of importance on the Switch. First, it’s a wonderful title that will please a lot of people and plays incredibly well, though, as many have said, the load times can be a touch too long. Second, it’s yet another warm embrace from Microsoft as we slowly but surely bring along other exclusives to the Nintendo side of the fence and create hope for future ports (Rare Collection, please!). Lastly, and I can’t stress this enough, it’s a game that can be played by children and adults alike and each will get a different kind of enjoyment out of it. My kids love to watch it, my eldest loves to play it, and I love wherever I am in the hemisphere of this game’s planet. I was delighted, and I can’t say that about many titles. Don’t hesitate and hamstring yourself just because it looks cute: Lucky deserves your attention.

Quite possibly one of the most competent 3D platformers in memory, Lucky balances cute characters and endearing worlds with solid design and strong mechanics.