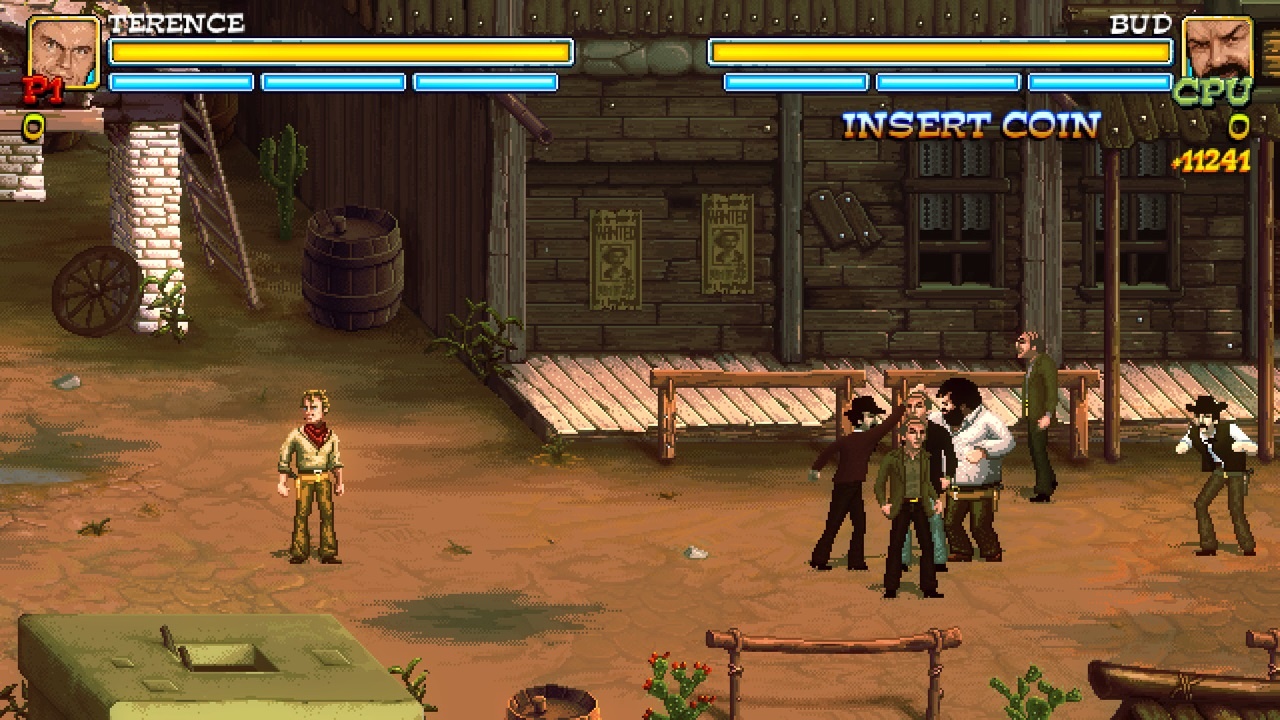 The incredible power and fascination that fans have with any sort of medium is downright staggering. The fact that there are only seven Harry Potter books in existence, and yet there is an annual convention and a worldwide appreciation for the Boy Who Lived, is a real testament to what a good story can create in the rippling effects of lasting adoration. Of course, Harry Potter, Star Wars, Doctor Who…these are all easy examples too point to and justify. But what about the lasting power of those games and notions that lie beneath the surface? Where’s the group that’s keeping the legacy of Starhawks, of Dark Skies, or even of Monkey Magic? They all exist, and they thrive: you just almost never see them break into the mainstream, because still waters run deep. And it’s that kind of mentality that quietly funded a successful Kickstarter campaign, released an acclaimed PC game, and, finally, brought about console ports, including a Switch version. Now everyone around the globe can experience what it’s like to see the world through a fan’s eyes, as we embark on Bud Spencer & Terence Hill: Slaps and Beans.

If you’ve never heard of either Bud Spencer nor his long-time film partner Terence Hill before, you’re probably from North America, and that’s okay. The Italian action comedy films of the two men were before many of our times, and titles like I’m With the Hippopotamus may not have caught your eye if you saw them on the shelves of Hollywood Video or Blockbuster. Basically, Bud and Terence are a very typical duo team that you’d see in the 60s and 70s, and they may have even been the ones to create the archetype. Bud is a bear of a man, large, grizzled, few words, big hits and an even bigger (but totally secret) heart. Terence is wry and wirey, the quick quip to perfectly balance Bud’s lack of speaking. The two cranked out quite a few movies, including several where they starred independent of each other, and they’re both well-loved around the world, just in different capacities (I was stunned to see a tribute statue of Bud Spencer in Budapest, of all places). This game, created by the official Buddy Productions team, is like an interactive greatest hits reel: Slaps and Beans is a boiled down iteration of everything great the two men did, from sharp dialogue with plenty of wordplay and puns to ridiculously one-sided brawling, with bad guys getting tossed around, women being rescued, beer being chugged and the plot quickly going by the wayside in favor of the visual spectacle of it all. There is a plot, kind of: Bud and Terence’s dinner is interrupted and then ruined by passing bad guys, who happen to work for even bigger bad guys, which Bud doesn’t really care for, nor about, because he’s viciously hungry. Trying to work their way into town to get some late dinner, Bud and Terence become embroiled in a much bigger story about saving townsfolk from truly awful people, and, most importantly, getting some decent damned beans. 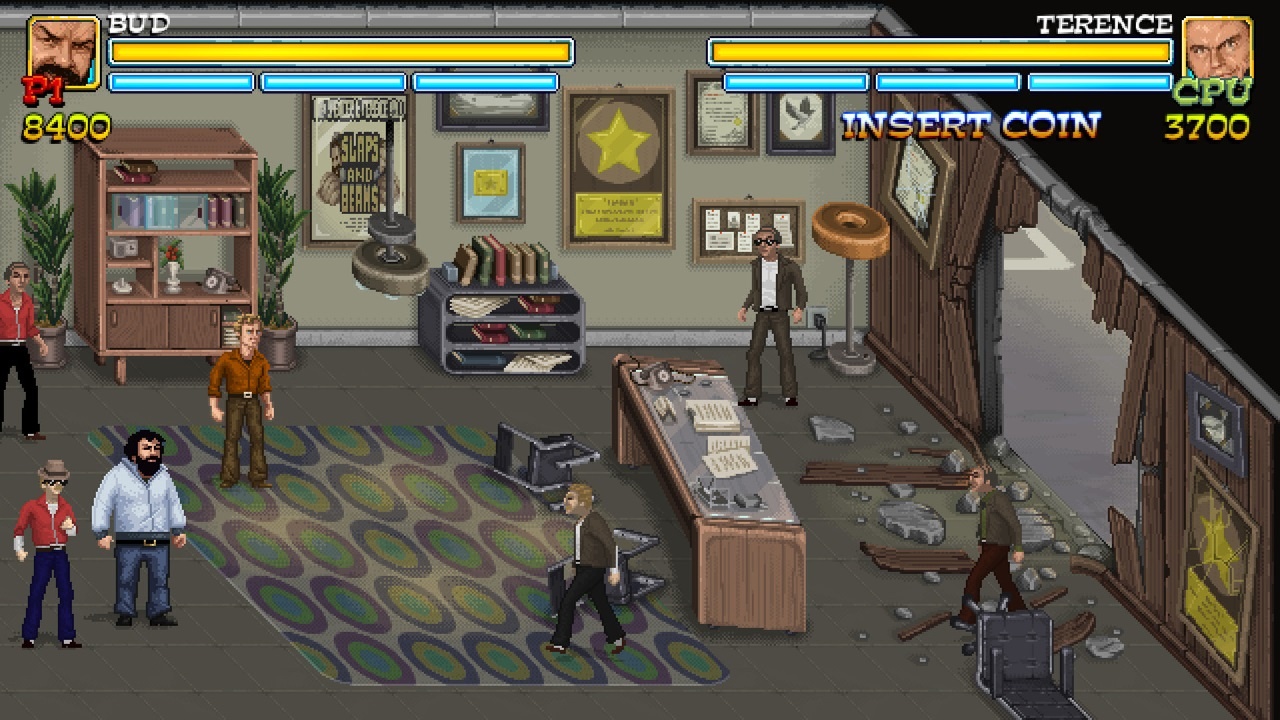 As a 2.5D brawler, the most important part of Slaps and Beans is the combat, and it’s good in the sense that it’s effective. One thing that people may not realize is there is a bit more to combat than simply mashing a button: if a game is doing it right, you’ll need to add a bit of variety, timing and positioning in order to make a game more than a one-sided beat fest. Slaps and Beans does a solid job of making sure that you do stay invested and engaged with things without there ever really being a moment of doubt about who is going to/supposed to win in combat encounters. Bud, as we’ve covered, hits like a truck and has two different hits (light and strong), plus a block button that is drastically unfair for the NPCs. If you get a good light hit combo going, you might get two or three shots in. If you successfully block an incoming hit at the right time, Bud rampages onward, slapping the guy five or six times before dropping him, and then you get to pick him up and carry him like a suitcase. You can play Terence (of course you can!) and some players may choose to do so, but Terence has a few shortcomings compared to Bud. Firstly, he hits faster but lighter. He also blends in a bit more with the henchmen due to his lanky nature, so you might accidentally stop training your eyes on him if Bud is on the screen (which he always is). If you’re playing this with a friend, you can easily maintain identity and keep focused, but things are a bit different if you’re soloing with the CPU: best to stick to Bud unless you’re a diehard Terence Hill fan.

Additionally, the combat is perfectly attuned to the comic nature of the action that Bud and Terence once embarked on. The realism of the fights is best summed up in a moment where an enemy dropped a beer, I picked it up, drank it fast to recharge HP, then hit the guy with the glass stein. While he was reeling from that, I whalloped him over the head like I was driving a railroad spike, which sent him down hard, and then I picked him up to throw him into a barrel, which promptly exploded. There has been a ton of love and effort put into this game to attempt to capture what it was like to watch these movies, and I think it succeeded in a grand way. Terence holds his own, dodging and punching well above his weight class, and Bud comes in like a furry train to bowl over people who overwhelm his partner. The only suspicious moments for me were when enemies dropped frypans of beans, at which point we ate the beans and hit more bad guys with the leftover skillets. Like, the entirety of this game started because of beans, and we’re able to pick up more literally all the time. Why can’t we just eat our fill way before the game sucks us into a stronger plotline and just go on our way? The answer, naturally, is because you’re Bud & Terence: you can’t just walk away from this kind of story. 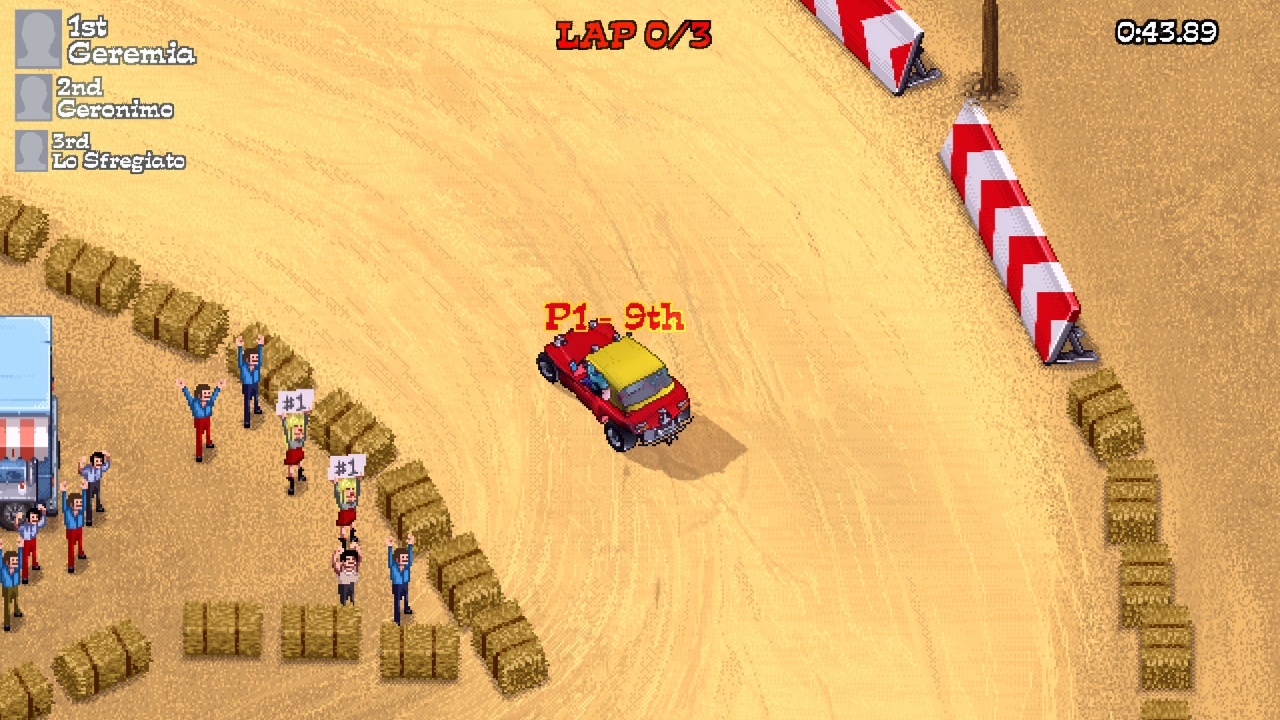 Graphically and aurally, Buddy Productions chose the perfect vessel to help bring the story to life and pace it out: 16 bit, late generation inspired design. Bud and Terence aren’t photorealistic, and you wouldn’t want them to be, anyways: this isn’t meant to be an FMV, it’s a damn brawler that perfectly captures the spirit of the 70s action comedy films in a scope that wasn’t available at the time. Rather than looking like cheap SNES sprites, Slaps and Beans really carries an updated Lucasarts aesthetic to it, from the sharp-yet-blurred form of each character to the colorful floating font for everyone’s speaking roles. This is only further enhanced by the games fantastic soundtrack, which perfectly captures the pomp and excitement of a Western film that neither Bud nor Terence ever actually starred in. This is like when Jericho decided to wrap up the series with a graphic novel instead of another season: maybe it was a different medium, but it perfectly picked up the tone and effect of what the show was.

And that’s something that simply cannot be denied about Bud Spencer and Terence Hill: Slaps and Beans. This game does a beautiful, honest job of capturing what it was like to enjoy and get into the films of the era, specifically with these two leading men in charge. It’s almost difficult to gauge it like a game and not like a love letter, because the passion and the sincerity of conveying the purposely over-the-top mentality from the movies bleeds out in every scene. This isn’t Bollywood or Troma, but this is the Spaghetti Western that never was, and it’s wonderful in what it brings. You don’t have to have indulged God Forgives…I Don’t! to see what was done for this game, and who it’s meant for. I respect the hell out of Slaps and Beans, and I know that even non-gaming Bud and Terence fans should absolutely give it a go: it’s a trip, possibly back in time.