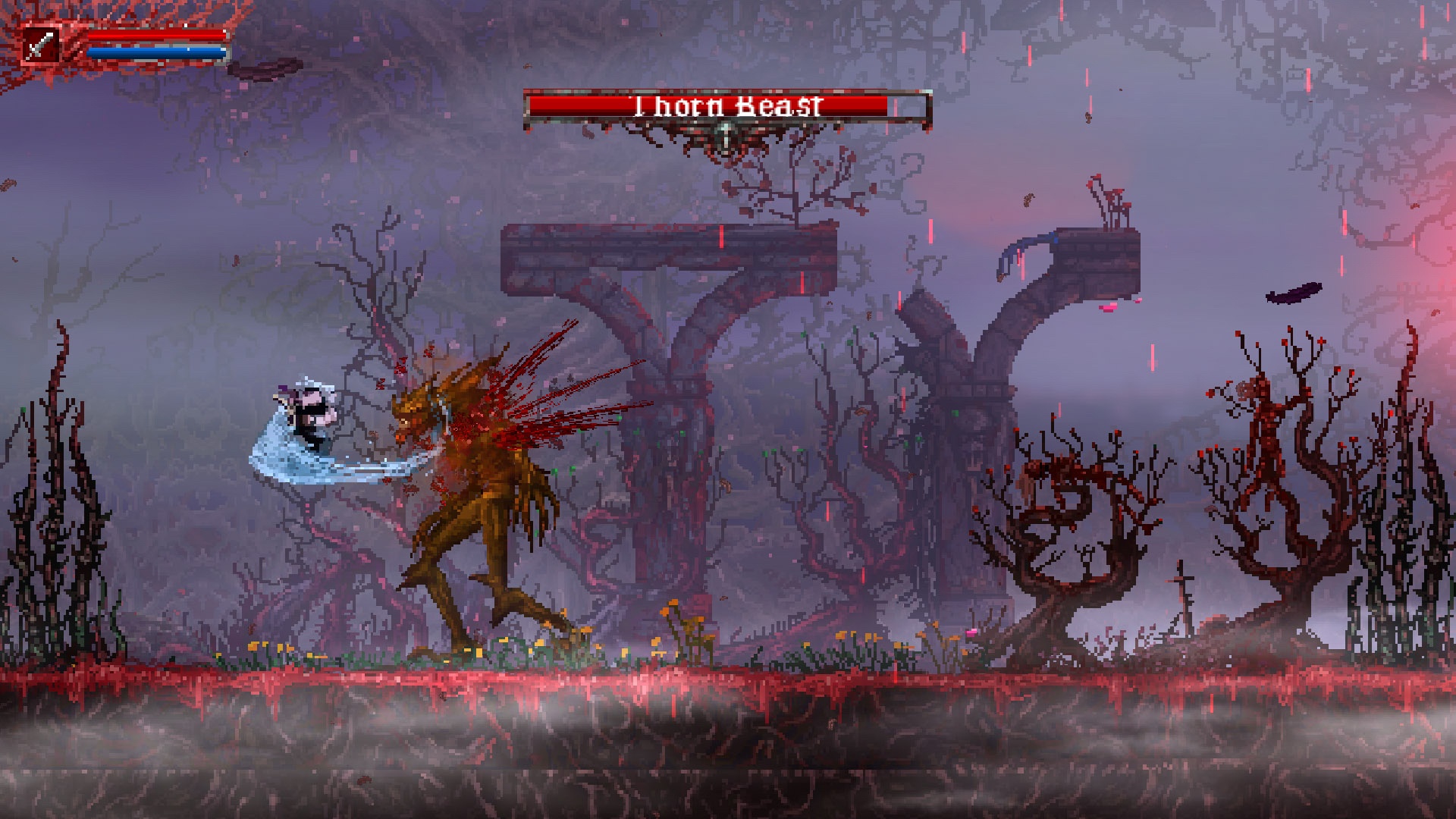 There is something truly delicious about ‘Slain: Back from Hell’. Somewhere between the luscious gothic graphics, the sublime metal soundtrack, or the satisfaction of sinking your sword into a demon’s head, ‘Slain’ just has that X factor.

The plot has a little bit of ‘Altered Beast’ to it, in that you play as a dead warrior who has been resurrected to combat hordes of monsters that roam the land. Initially reluctant to wake from his slumber, the warrior eventually takes up his sword and the fun begins.

The first thing worth noting about ‘Slain’ actually lies in the presentation. Slain is a tremendously pretty game to look at. All of the sprites and backgrounds consist mainly of pixel art, however unlike a lot of retro looking games ‘Slain’ never falls into the trap of constantly repeating assets and tiles with minimal variety. Instead, a breathtaking amount of effort has gone into filling these dark and gothic landscapes (such as forests, ruins and castles etc.) with lots of unique architecture and detail. In addition to the pixel art, the developers also take advantage of more contemporary special effects such as dynamic lighting, glowing sprites and weather effects to help create a thick atmosphere. 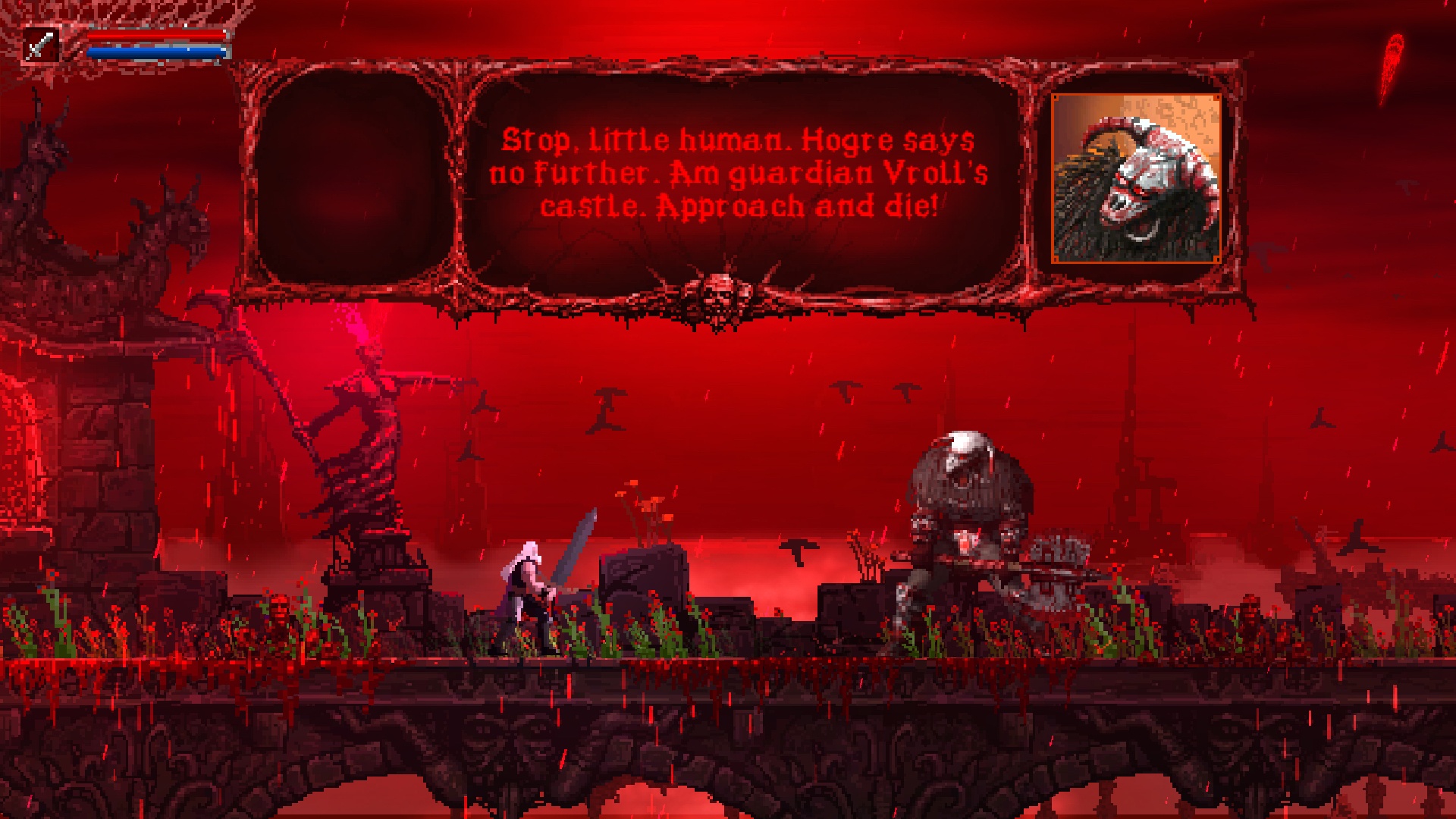 This game is advertised as having a heavy metal soundtrack, which concerned me a bit at first as I’m not a huge fan of the genre, but actually the music included here works extremely well. In addition to the heavy rock, the tracks are also fused with the sounds of synthesizers and orchestral instruments. I found it very reminiscent in style of the original ‘Doom’.

‘Slain’ is an action platform game which is soft on actual platforming, yet very hardcore on combat. It’s a bit of a mesh of classic horror games such as ‘Splatterhouse’, ‘Castlevania’ and ‘Shadow of the Beast’ all blended together. The warrior can run, jump and hit switches. As such the levels are laid out with spike traps, moving platforms, lifts, all very basic stuff. However the main focus of the gameplay is fighting monsters which requires agility, sword play & magical powers.

You move your character around with the left analogue stick, X makes you jump, square swipes your sword, holding square makes you lunge, triangle makes you block, L makes you dash back (think Symphony of the Night), R releases a magical projectile, and holding down and R releases a screen clearing blast.

Different monsters have to be tackled in different ways so simply spamming the attack button isn’t going to do you any favours. Some enemies require stunning with projectiles, some need to have their own projectiles deflected back to them, with some enemies it’s more effective to counter with a perfectly timed block before attacking. These are just some of the strategies needed to tackle enemies ‘one on one’. When facing a room containing multiple different enemies you have to make sure to keep on your toes.

The first few stages have to be tackled in order, however you will eventually reach a clearing that acts as a hub for you to tackle the later areas in the order of your choosing. In addition to beating the various stages and bosses there is a side quest which involves finding all the pieces on an amulet. Each one is hidden in a secret location so if you want to fully complete the game you have to keep an eye out for hidden switches, breakable paths, secret passages etc. 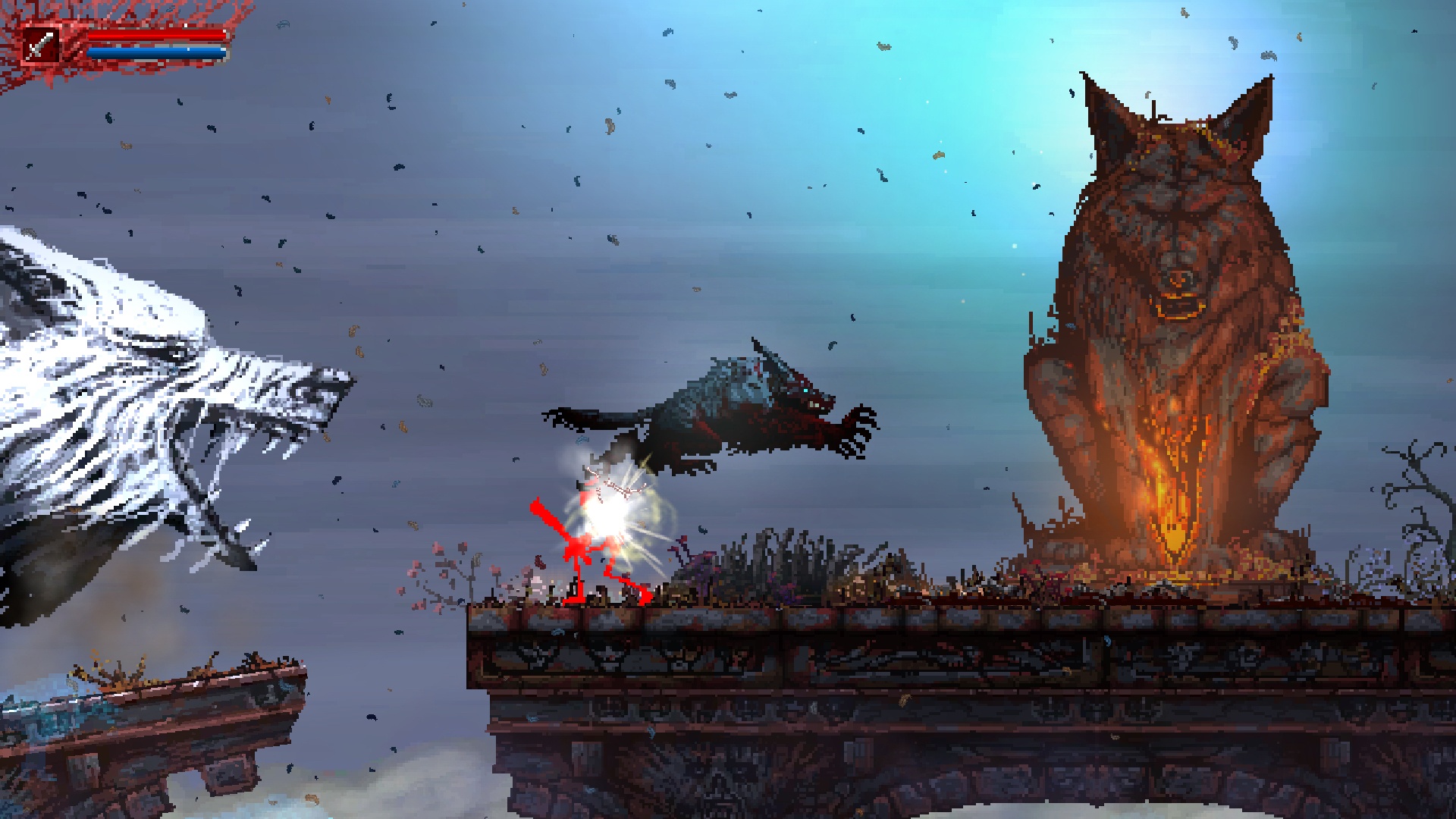 When it comes to this game I have very little to criticise, however do be warned that it is a tough one. Mercilessly tough. Each stage contains multiple check point and the game auto saves after you reach each one. You have unlimited continues which is a blessing as you’ll be expected to die a lot. I spent hours tackling the same battles repeatedly trying to edge my way closer to that all important check point. Personally, as much as I like this game I feel as if it’s a bit too hard at times. There’s a fine line between fair challenge and punishing frustration and I think ‘Slain’ leans a bit too far over it.

There is only one campaign with no other games modes or levels of difficulty (which this title could really have benefited from). However, there are three different save slots which can be handy for subsequent playthroughs.

The Vita version is very faithful to the PC / Home console version, however I’m pretty certain that the Vita version runs at a lower frame rate. I’d previously played the PS4 version which ran as smooth as butter, and I’d hasten to guess but I reckon the Vita version is probably locked somewhere around 30fps in comparison. I’m not entirely certain without doing a side by side comparison, but I think some of the visual effects such as the sword clashing may have also seen a small downgrade. If this is so it’s not a deal breaker for a portable version.

Overall, as frustrating as the difficulty was, I really enjoyed ‘Slain’. On PC or home console I would have probably scored Slain an 8/10 for being a decent game with superb presentation, however I’m going to score this Vita version a tiny bit lower as the reduced frame rate was a touch disappointing.