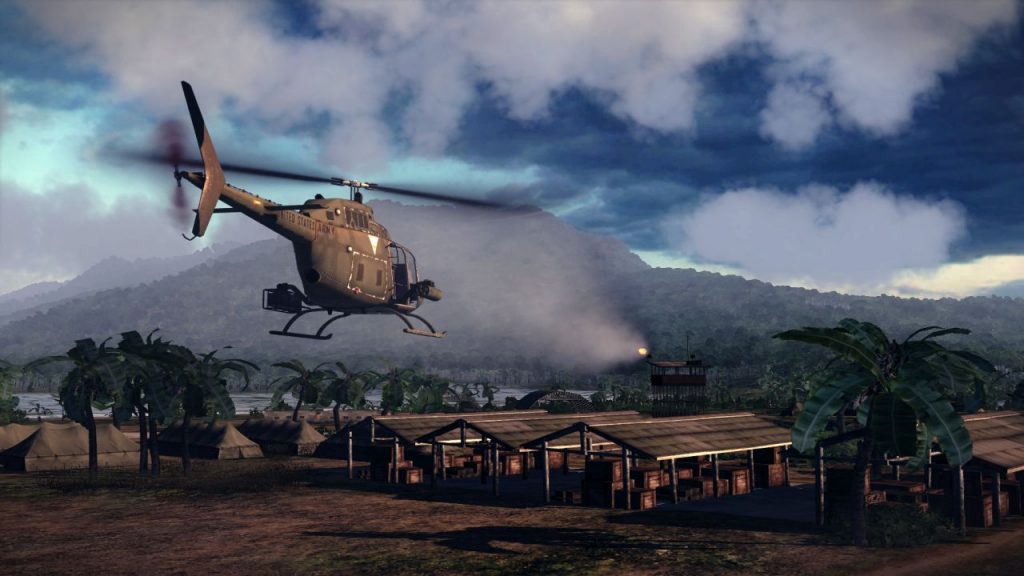 Two years after the original release of the ‘Ultimate Edition’ of Air Conflict; Vietnam on the PS4, I sadly find myself returning to one of the worst games released on PS4, a game that now comes bundled with the equally terrible, Air Conflicts: Pacific Carriers. Rather than screaming and shouting in frustration at all that is wrong with this rather disappointing and largely unnecessary double pack, I instead found myself sitting back, caught in a strange emotional quagmire of disappointment, shock and pity. Neither are bad enough to be funny and nowhere near good enough to be enjoyable; they just exist as a selection of games in which their few competencies are completely overshadowed by their technical limitations and array of poor design choices.

Strangely enough though, despite both games being undoubtedly poor, they actually start off rather positively – upon booting up either game, the fighter jets and helicopters all look decent enough with handling finding that sweet spot between simulation and arcade controls. Some of the helicopter controls can be a little tricky, but for the most part, each of the aircraft feel decidedly unique with a host of capabilities and attributes that make each games’ most basic actions really quite enjoyable (except for bombing……bombing is horrible).

The new simulation mode added for the PS4 versions of these games also offers up a more traditionally hardcore control scheme for those looking for a little more challenge. It’s not nearly as fun as the standard arcade control set-up and doesn’t particularly suit the games built around it, but as far as simulation style controls go, they certainly to do the trick and offer a more challenging experience for those looking for something a little more ‘authentic’.

The aircrafts might be fun to control (in both arcade and simulation modes) and they might even look rather nice (well, in comparison to your surroundings anyway), but my God, the rest of these games truly are an utter mess. From the shoddy visuals, piss poor audio and the often terribly told story to the mostly boring missions and, worst of all, the game breaking invisible walls, neither of the Air Conflicts games were worthy of your attention upon their initial release, and despite the inclusion of both Vietnam and Pacific Carriers here, certainly aren’t worthy of it in 2016. 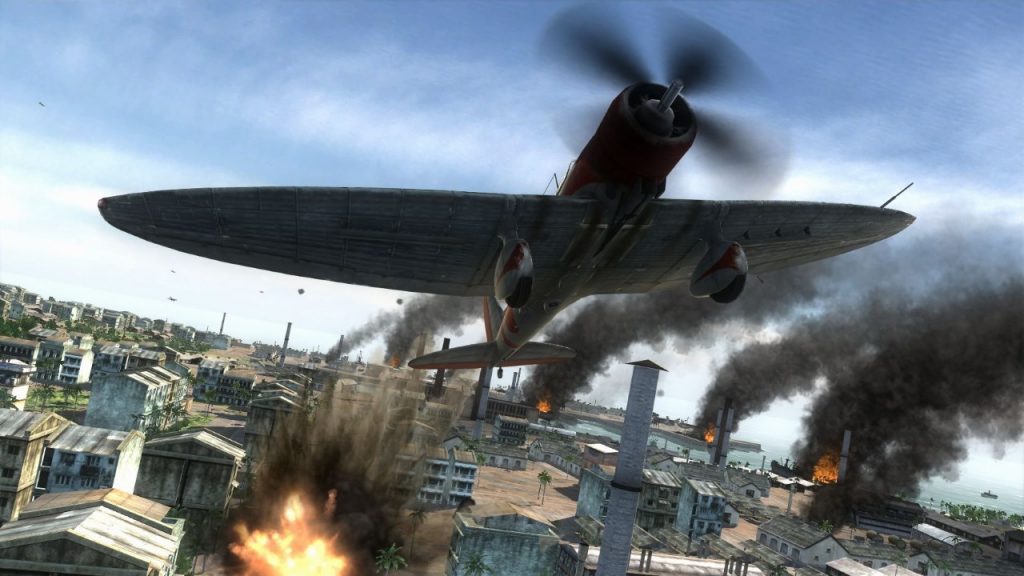 Of all of these games’ faults, the most unforgiving has to be the invisible walls. I accept that all games of this ilk require an invisible barrier at some point in the game world, but here, the game area is so enclosed and the limitations so clearly sign posted that it completely robs the experience of any sense of scale. It’s so bad and so obvious (a giant red wall in case you were wondering), that you can actually use these limitations to force enemy aircraft back towards your position for an easy kill (not nearly as fun as it sounds). It’s bad enough when traveling in one of the relatively pedestrian helicopters, but when in the cockpit of a high speed fighter jet, it is simply unforgivable.

It might (might) have made more sense if the game worlds were highly detailed, but man, these really are unattractive games. As good as the aircraft might look, just about everything else looks like a mid-tier PS2 game. I don’t want to sound overly harsh, but there are no two ways about it – both Air Conflicts: Vietnam and its Pacific based brethren are horrendously ugly. The terrain, the enemies, the explosions, heck, even the sky, it’s all horrible to look at. They’re also technical disasters to boot with the constant pop-up in the scenery proving especially jarring. The poor visuals and technical problems were hard to take upon their initial releases on PS3, but with very little in the way of tangible improvements, it’s even harder to take on the exponentially more powerful PS4.

It’s a shame too as Vietnam in particular is so iconic that a game built around this setting has so much to pool from, so many fantastic reference points that it comes across as an especially wasted opportunity when everything falls so disappointingly flat. If nothing else, the developers at Games Farm should have been able to create a mood associated with the setting and the war. Instead, you’re stuck with an array of locations that could be from just about anywhere in South East Asia and a story that  fails miserably to capture the imagination with poor writing and delivery combining to create a complete mess of a tale. The inclusion of the new ‘Lost Letters’ mode which has you playing as Vietnamese ace, Nguyen An Toon is a nice touch and provides an interesting secondary viewpoint to the conflict, but even this is dragged down by the fundamental issues that ultimately undermine the entire experience.

Well, at least they got the music right, I mean come on, there is no way they could make a mess of that is there? Oh, wait a tick; they could and they have. Despite the myriad of music and sounds associated with the conflict, developer, Games Farm have somehow made even this aspect of the experience both boring and mostly forgettable.

Things do improve slightly for Pacific Carriers in so much that the developer arguably makes better use of the setting and the subsequent narrative, but again, poor design choices and technical deficiencies are a constant barrier to genuine enjoyment. In fairness, the ability to fight on both sides of the conflict as either Admiral Lucas Stark of the US Navy or Admiral Hideaki Hashimoto of the Japanese Empire is a much welcome change of pace from the traditional US/Western-centric takes on virtual war, but even this can’t save the story from complete mediocrity. 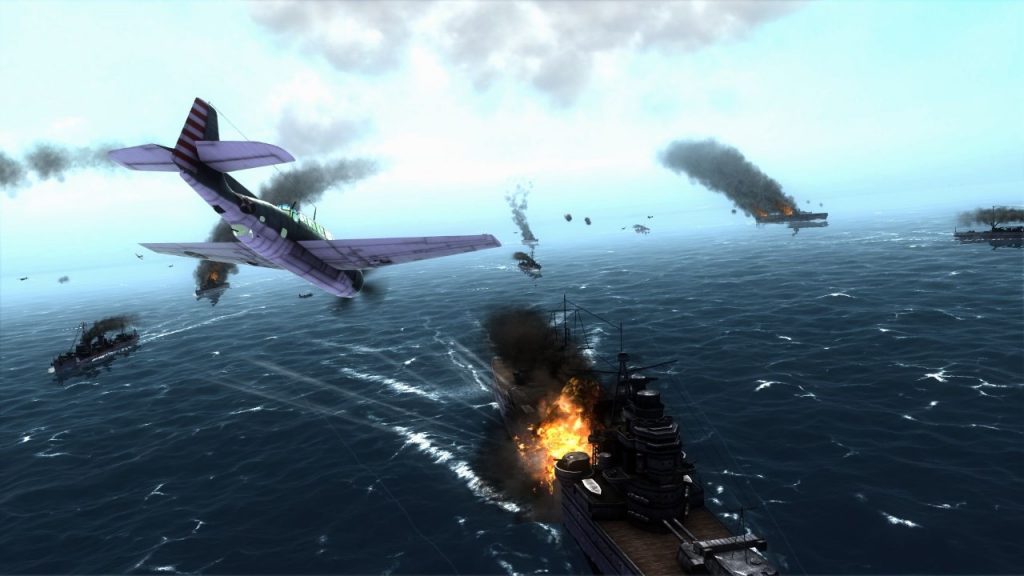 Still, despite a handful of positives, the lengthy single player campaigns in both games are nothing short of a slog. The handling of the aircrafts make each game fundamentally playable, but the uninspired mission design and the limited airspace essentially ruin any chance of either game ever being close to what anyone could consider fun. The story for Pacific Carriers is far superior to the Vietnam equivalent, but despite both games having their moments, there is no getting around the fact that each setting is criminally wasted.

There are a collection of online multiplayer modes with capture the flag providing a potentially interesting twist on the standard dogfight set-up, but again, limited airspace severely limits the tactical possibilities, and besides, you would do extremely well to find another human being playing either game online. That’s not me being unnecessarily mean, it’s a simple fact. There are moments of fun to be had if you are lucky enough to find other players online thanks to the solid handling of the majority of aircraft, but as always, the limited scope and array of minor bugs make extended online play something of a grind.

With its wasted settings, array of technical limitations and hit-and-miss storytelling, this double dose of Air Conflicts remains all but impossible to recommend. The lack of recent releases in the flight combat genre will ensure at least a modicum of interest, but even the most flight-starved of gamers should beware this budget collection of what are undoubtedly budget level video games. Even if you’re a fan of arcade-style air combat (which I am), there is simply nothing here that hasn’t been done so much better elsewhere. The fighter jets and helicopters look relatively nice and they do handle well, but when the rest of the game is as poor as it is here, these positives only serve as a further disappointment in what amounts to an utterly pointless re(re)-release of these games. They were bad on last-gen consoles, but on the PlayStation 4, their array of faults are all the more unforgivable. You might be getting two games for the price of one, but in this instance, that’s not necessarily a good thing.