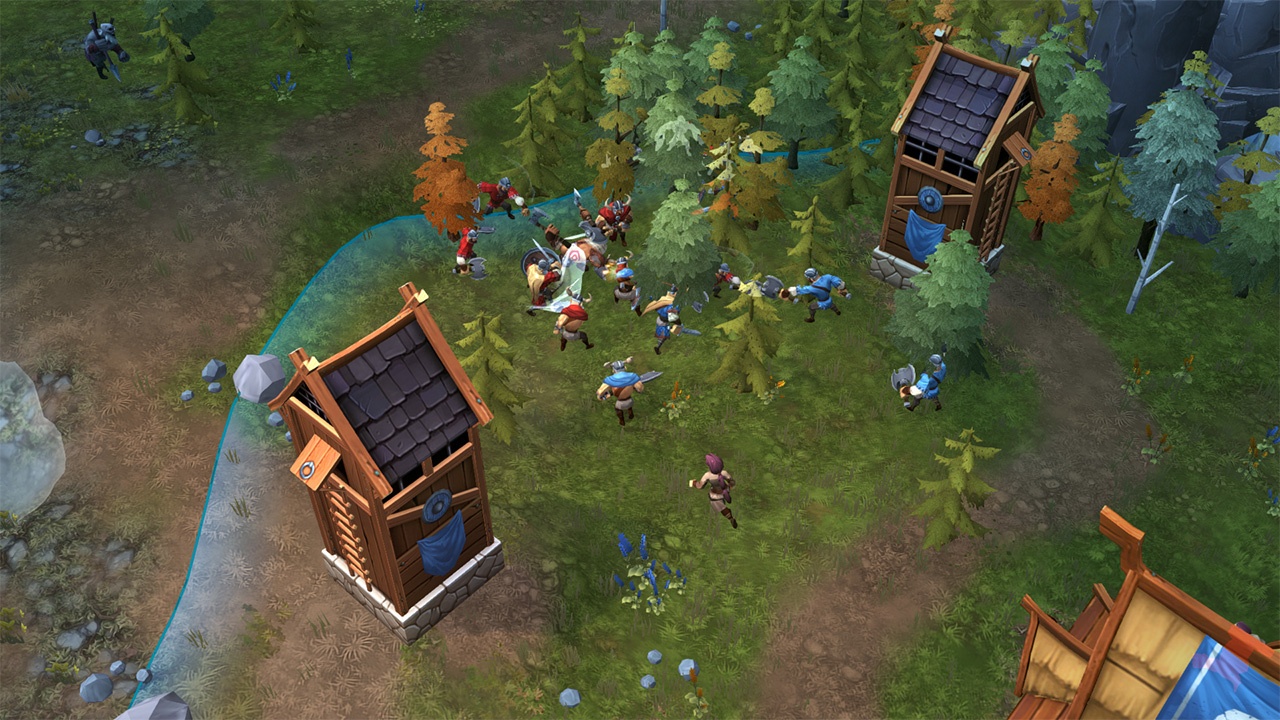 It must have been an exciting time living within the era of the Vikings. Living life within villages with your clansmen, building new structures and longboats, setting sail for undiscovered shores full of wonder and surprise; as well as a few enemies that could be ripe and ready for a good old plunder. It was a world full of religious beliefs, wonder and brutality, not just in conquering new shores, but also within the survival of the natural world with harsh winters, offset with the fruits of the harvested Summer. It’s a lifestyle that is thoroughly explored within Shiro Games’ latest title, Northgard as it sets sail to conquer the shores of the Nintendo Switch.

You play the role of a clan leader, responsible for the day-to-day running and welfare of your clan, as you designate villagers to specific tasks such as scouting, building, soldiering, carpentry and farming. Your task is to build a happy village for your faithful followers, providing them with food and shelter, as well as preparing for the harsh winters and the unknown elements of the natural world and undiscovered countries. The game plays as a hybrid RTS/City Builder, giving you overall responsibility on the running and fortunes of your own Viking band of brothers and sisters.

This is achieved by an accessible means of on-screen menus and pointers that allows you to quickly build, set tasks, position buildings and armed deployments. The button mappings have been extremely well implemented, allowing you to make quick decisions on-the-fly; ensuring you retain complete control over everything that the game has to offer. There’s a huge amount of depth here though and the game forces you to be constantly aware of all the functions that your group are performing. However, despite the ease of access within the game’s elements, it offers a brutal challenge with its unexpected surprises, enemy battles and types and balancing the needs of your village with stockpiles of resources and general happiness. 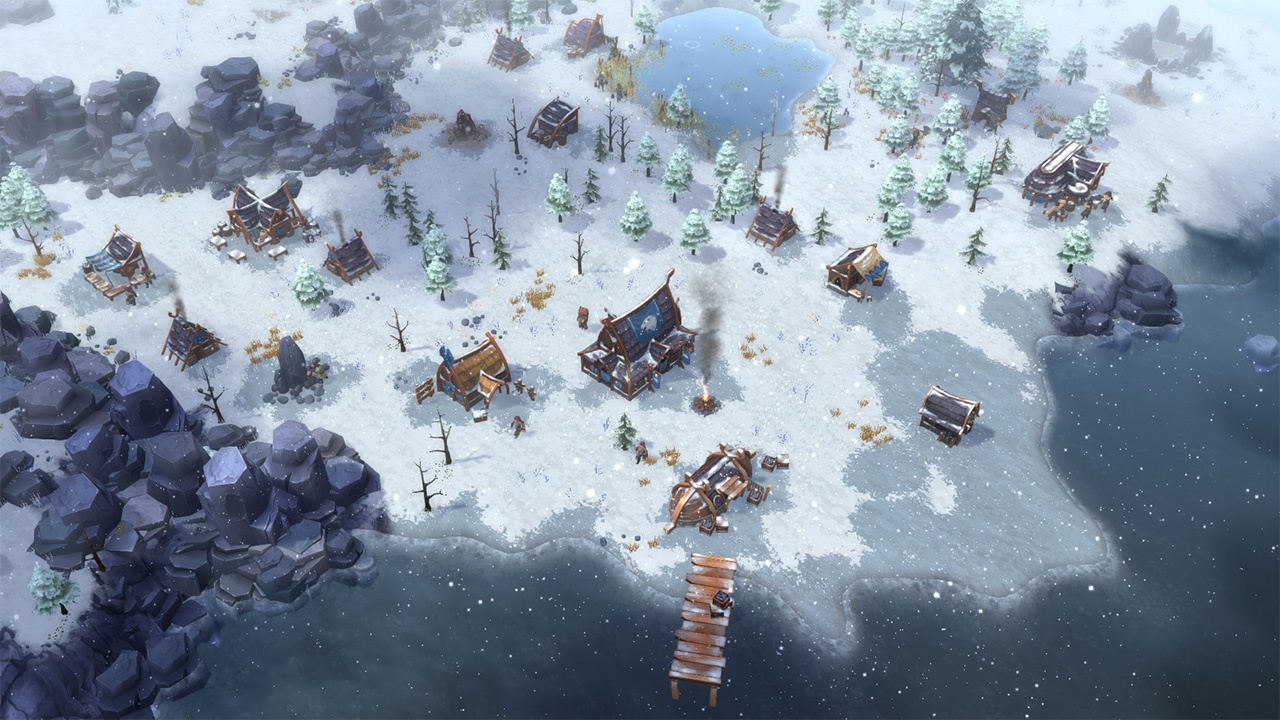 Although the game offers a stern challenge, it’s rarely unfair. Failure usually comes from your own mismanagement or through mistakes. In this respect the game requires you to learn all of its intricacies and learn from your own mistakes, so as to ensure that you never make them again and become a better leader in making sure all the factors that your village requires are met. This is largely achieved by making sure all your villagers have a task, so that they all work towards the well-being, upkeep and expansion of the clan and their village.

There are a variety of game modes in which the game can be played, from single-player scenarios that can be set to have a number of victory requirements, from domination to trading and fame to wisdom. As well as this, the game also contains a thoroughly engaging campaign mode which does a great job of helping you understand the mechanics of the game and how it works. There’s also a multiplayer element for up to six players, but due to this being a review copy of the game before its general release, I was never able to find any available games to play. However, whatever game mode you to choose to play, you can be sure that the game offers a huge world in which to play, one that will keep you playing over the long term and is full of all sorts of surprises to keep the game fresh and you on your toes.

Each map, whether it be single-player or campaign, is divided up into a series of segments; the lay of the land being hidden until it is discovered. As you begin to build a home base, or village, with carpenters, farmers and soldiers, you can also set forth scouts to explore the region in which you find yourself. As your scouts uncover new areas, they can reveal all manner of discoveries, from fertile land that can be farmed, areas that may hold vital resources and any number of dangers from packs of wolves to rival clans and giants to dragons. This exploration element of the game provides a lot of fun as you uncover new secrets or areas that need to be explored further to reveal their secrets. 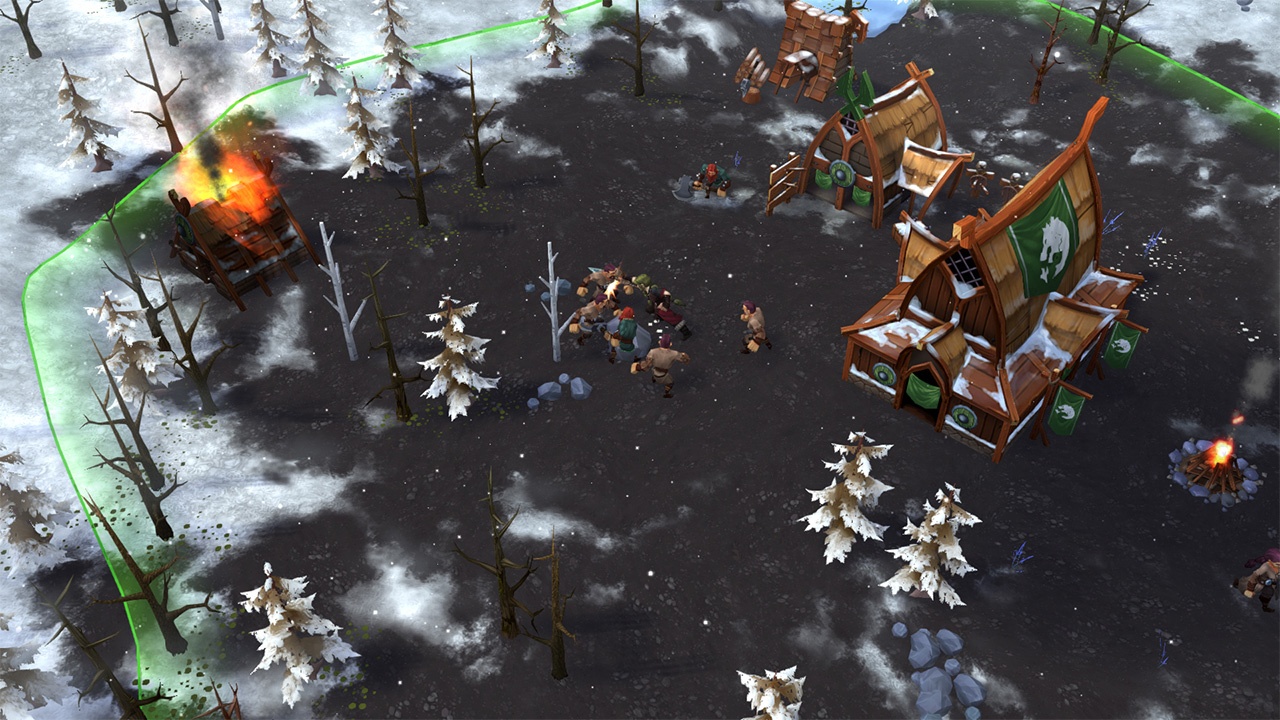 The campaign mode offers you a story that revolves around a clan’s embarkation to discover the secrets of Northgard; a previously unexplored land full of riches, wonders and many dangers. This mode does a fantastic job of introducing you the the mechanics of the game, with your first quest being to explore the region and find a suitable shore upon which to build a longboat and sail over to the new continent. From there, you truly embark on an epic adventure of discovery as you conquer the lands, fight all manner of enemies and reap the rewards of the lands rich resources. There’s so much to find and discover, that I simply can’t list them all, but the game keeps things running at a nice pace that changes the you way you play, from seasons, weather conditions, natural disasters and divine interventions.

Your clan can also take on a symbolic meaning, with the ability to produce a following that revolves around animals, such as the bear, boar, raven, goat, stag and wolf. These offer their own unique perks and tech-trees that can be expanded through the discovery of lores. These perks and upgrades can be relevant to whatever style in which you choose to play, from adding buffs to village happiness, or adding bonuses to military units. Each of these clan followings offer a unique style and challenge; adding further to the long-term appeal of the game. Whilst Northgard is an extremely easy game to grasp, its challenge makes it a difficult one to master. However, with the added bonuses and buffs from your clan’s following, you can tailor-make your experience to help make up any weaknesses that you may struggle with.

Overall, Northgard offers an exciting and intriguing look at the life of running your very own Viking clan. It’s detailed, its expansive and offers a variety of game modes that creates a different style of gameplay every time you play. Its extremely accessible and easy to play, yet fiendish in its challenge and difficulty, but never to the point where it feels unfair. The more you play, the more you learn and the more you adapt to the harsh conditions that the game throws at you. If you’re a fan of the RTS genre, then this is simply another must-own title on the Nintendo Switch and even if you’re new to the genre, this game offers a perfect way in which to experience the delights that its style can offer. It’s a very deep and very rewarding game that deserves a place on anyone’s memory card, but only if you’re willing to persevere with its intricate design. As I said at the beginning of this review, life is almost certainly an exciting time within the era of the Vikings.

Much like the Vikings themselves, Northgard is a game that is brutal and unrelenting, yet is also an utterly compelling experience within the genre of RTS.