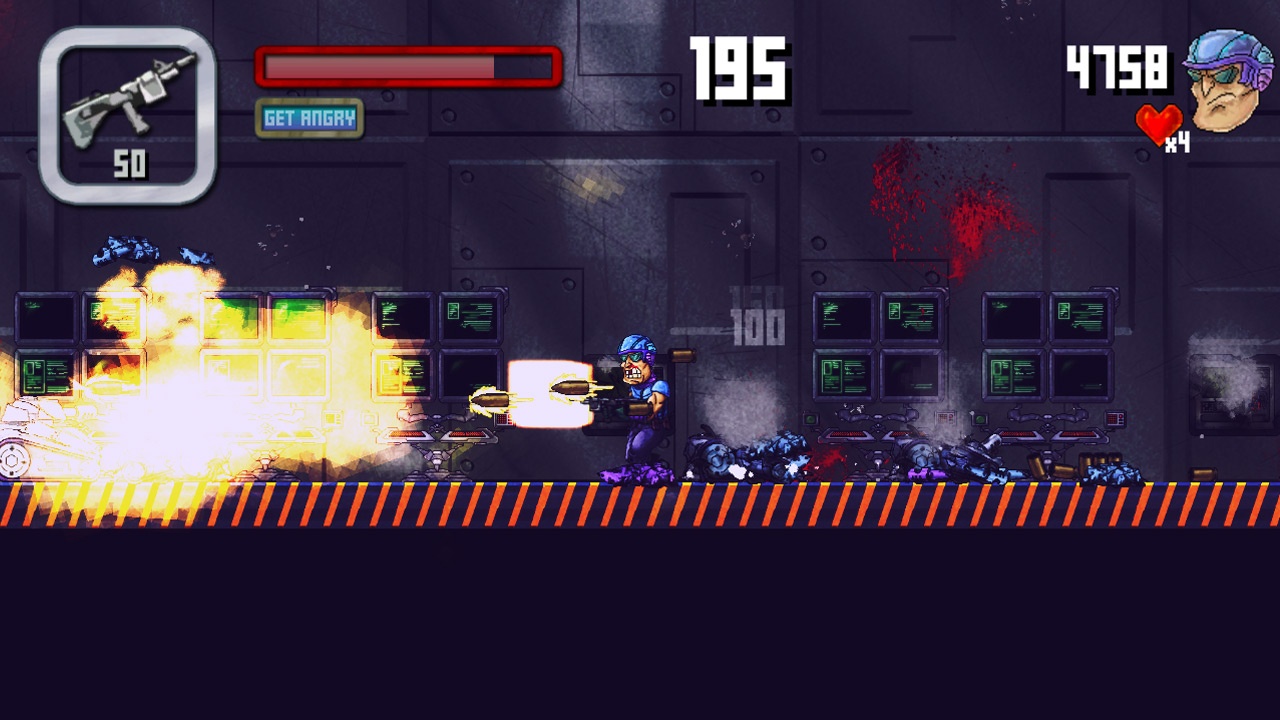 Are you looking for an old school 2D platformer that’s more about shooting than platforming? Soundtracked by a Polish man swearing and doing his best Arnold Schwarzenegger impression? Well Too Angry to Space  may just scratch that itch as developer AK84C steadfastly aims for a decidedly old-school approach.

Part of that policy is a focus on pure action and that begins with a bare bones story that essentially just involves killing all the robots and aliens that have invaded your space station. Main character Red Madson is also a throwback to a simpler time as he grunts out comedy-macho phrases worthy of Duke Nukem (there is an option to disable the profanities though if you were thinking of letting a younger gamer have a go) as you save the day by shooting everything in sight. You can even regain health by shooting computers if you’d rather not wimp out by picking up media packs.

The limited space station setting actually reminded me more of Doom however especially with the red, blue and yellow keycards you have to collect on each level. This becomes more obvious the more you play with the sound effect as you select options on the menu screen, the post-level score screen and the way Red’s  face in the corner of the screen gets more bloodied as he gets damaged (or freaks out as you activate ‘angry’ mode). 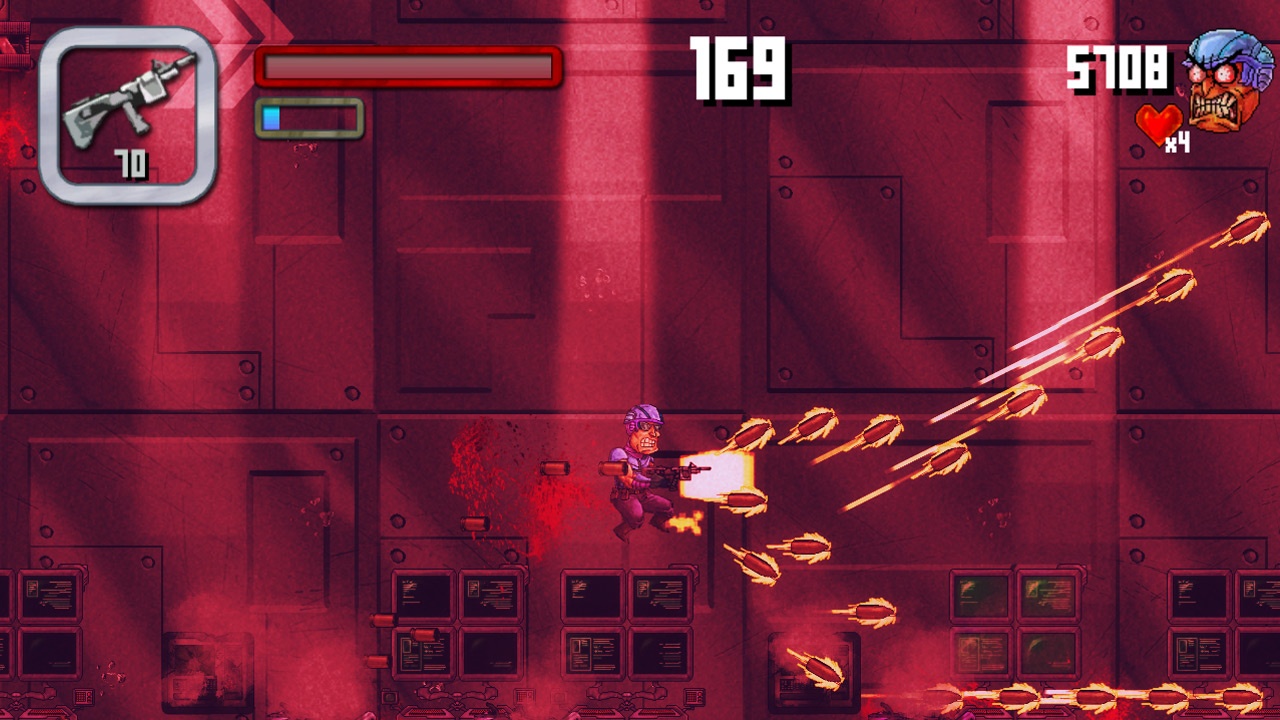 One of the key advanced over Doom though is the fact that Too Angry to Space includes the ability to both jump and duck. It’s here though that cracks show in the gameplay as both features are poorly implemented – the jump feels very floaty and often results in jumping into enemy projectiles while ducking has even more problems. You can neither move nor shoot while ducking, and in fact it’s main purpose is to slightly shift the camera before making one of numerous leaps of faith.

Graphically Too Angry to Space definitely succeeds in looking old school, although this isn’t necessarily a good thing. Enemies look like paper cut-outs while the space station setting becomes repetitive very quickly, to the extent it’s very easy to lose your bearings as you wonder around a level trying to find the exit – at least Doom had a useful map you could use. The environmental effects are particularly poor with heavily pixelated fire, lasers and toxic waste dangers looking a bit out-of-place. More annoying though is the fact you’re never quite sure how close you can get before being killed.

That’s not to say it looks terrible though, the visuals of Too Angry to Space have a certain charm about them and are a good match for the stripped-back gameplay. Each of the 14 levels is fairly compact and just requires you to carve your way to the exit with a ticking clock ensuring that you move at a steady pace. Enemies are extremely limited and uninspired but at least explode satisfactorily, and although there are only four weapons they each feel worthwhile and given the short number of levels it probably isn’t necessary to include any more. A three life checkpoint system is generally implemented quite well (if you’re out of lives you simply restart at the very beginning of the level) although on later levels it can become a lot more frustrating, especially as ‘cheap’ deaths become more common. 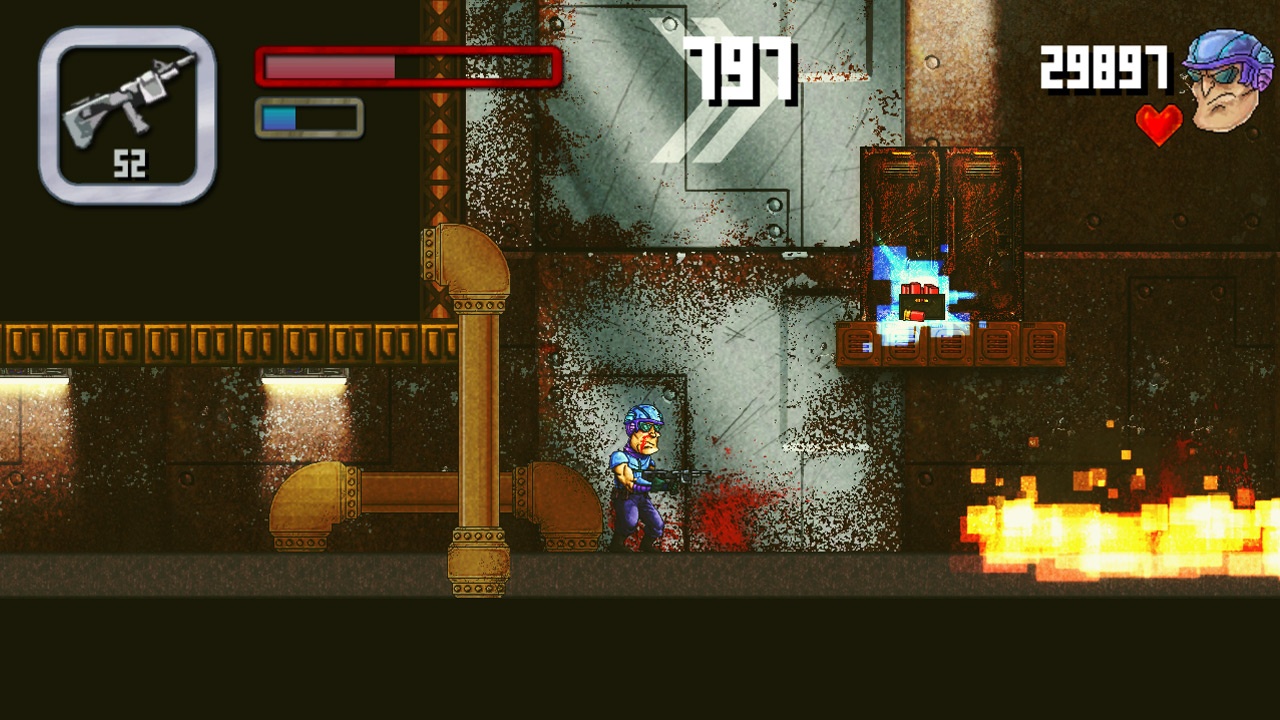 The simplicity of the game is definitely it’s strongest point and ensures it succeeds in the ‘pick up and play’ field. The keyboard control scheme can technically be played with just one hand if you wish (the game recommends you hold a beer in the other) and it works well with a gamepad, even if it frustratingly doesn’t list how the buttons map to a controller leaving you to work it out for yourself. This also brings me to a number of poor design decisions that count against Too Angry to Space, such as the fact there is only a ‘next weapon’ button but not a ‘previous weapon’ meaning you have to cycle all the way round again. The pinnacle of this poor design though are the slug enemies who move below the firing line of both the pistol and assault rifle (you can’t shoot when ducking remember) so if you’re out of shotgun shells that’s quite a problem.

Longevity is the main issue however with only 14 levels and the lack of variety. The challenge of later levels just become frustrating while the boss levels are particularly disappointing, the first tank boss level was so poor I actually laughed out loud. I would welcome a quality action-platformer with open arms but Too Angry to Space is not that game, it does admittedly provide a bit of enjoyment but there are far better options out there even at this wallet-friendly price.