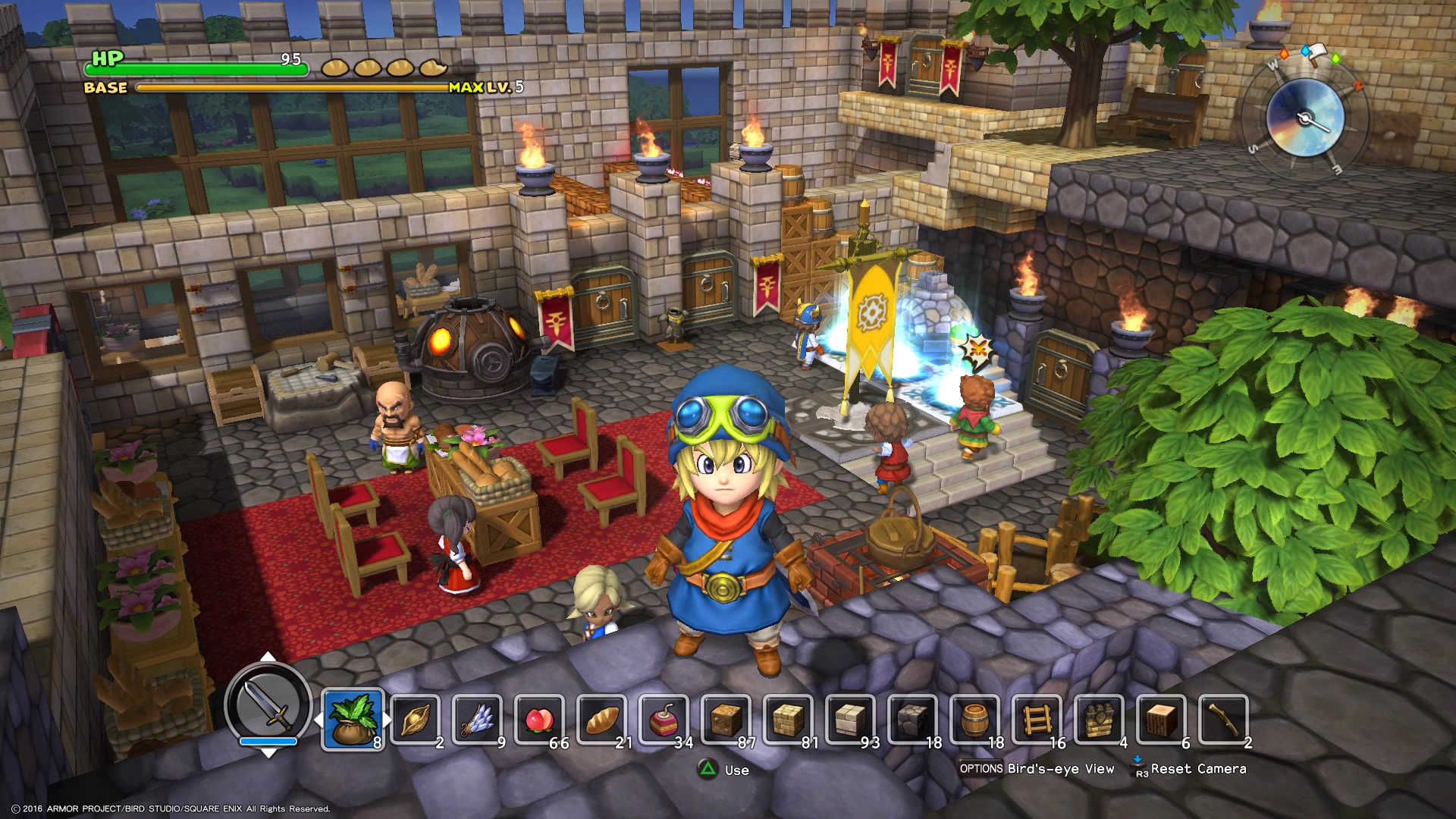 Dragon Quest Builders is some of the most fun I have had on my PlayStation 4. Its addictive formula of collecting new materials to enable you to create new and exciting recipes is what keeps you coming back for more and more.

This game is more like Terraria than Minecraft. Its crafting system is very simple and unlike Minecraft’s sometimes complex crafting system Dragon Quest Builders lays it all out for you. The Blueprints are very cleverly done telling you exactly where you need to place your blocks as well as how many you need. The game starts off by telling you “YOU ARE NOT A HERO” Now this is very odd because the leadership you show as “the builder and how NPCs look up to you makes you think otherwise.

The game does start off a little slow. You fulfil tasks for the townspeople and as the little town you create grows more and more is asked of you. wether it be obtaining new items in order to craft something new to a persons need or go slay a boss the acquire a skill or new recipe.

The dragon Quest world shines as this type of game too. I loved how true it stayed to the original games. You still have the blue portals you go into to go to a whole new world and each new exiting world shows an endless possibly of new weapons or armours that you can create to protect yourself. The game doesn’t level up your character however and you only get stronger by obtaining new powerful items that do break after so much use. 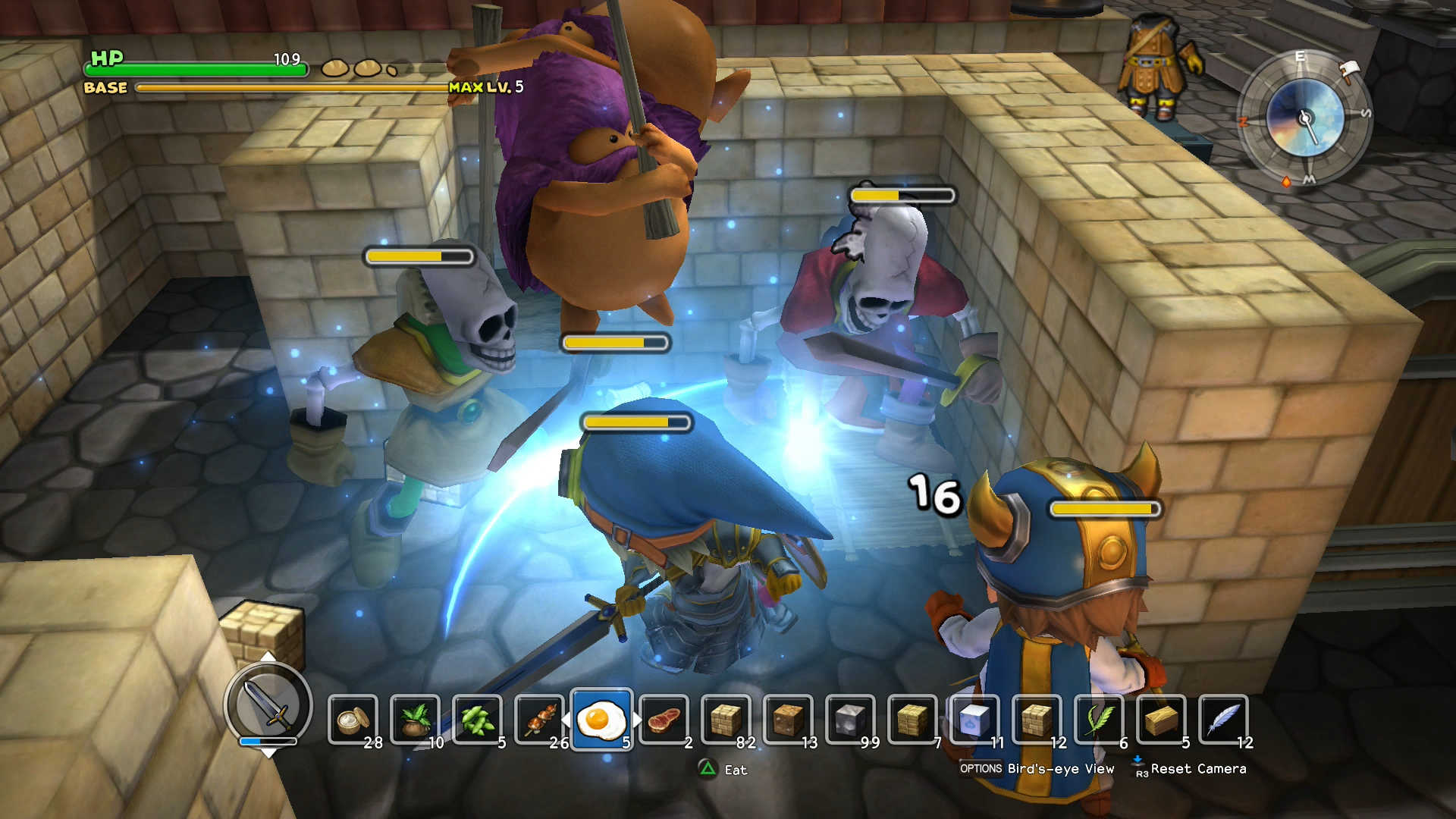 The game helps itself as much as possible too. Full inventory annoyed me at the start of the game as I had to discard something in order to pick something new up to obtain new recipes so when I created the new chest that automatically sent the overflowing items straight I picked up to it I cheered with glee as I now realised that this game has no faults in its execution.

It is a little disappointing that this game isn’t multiplayer. It’s a lot of fun don’t get me wrong the single player campaign is huge too and I have enjoyed it but to be able to play with a fellow builder or to have a competitive mode to see who could build the best town or conquer a town would have been awesome. Hopefully if there is a sequel we see this. Do not let this put you off though Dragon quest builders should appeal to everyone who’s into Dragon quest games or Minecraft or games like Terraria.

You will find sometimes that you can’t destroy certain objects until you have a better weapon or you’re at a certain point in the story apart from that this really is a game you can do what you want when you want.  It never overloads you with quests either at most you get 2 or 3 at a time so you never once feel overwhelmed or lose track on what you have to do next. Some of the NPCs when your village is under attack from monsters will grab weapons and help you defend too. This is a nice touch from just collecting and building all the time.

Each chapter is pretty long in length too. This won’t be one of those games you will finish in a few hours. combat is super simple and even kids should get to grips with the fundamentals of the game pretty quickly. Those looking for fan service won’t be disappointed either. As a fan of the dragon quest games myself (my first was Dragon Warrior monsters for the Gameboy) I saw and recognized tons of elements from the game. The music is from previous games the teleport noise is still the same the victory music. 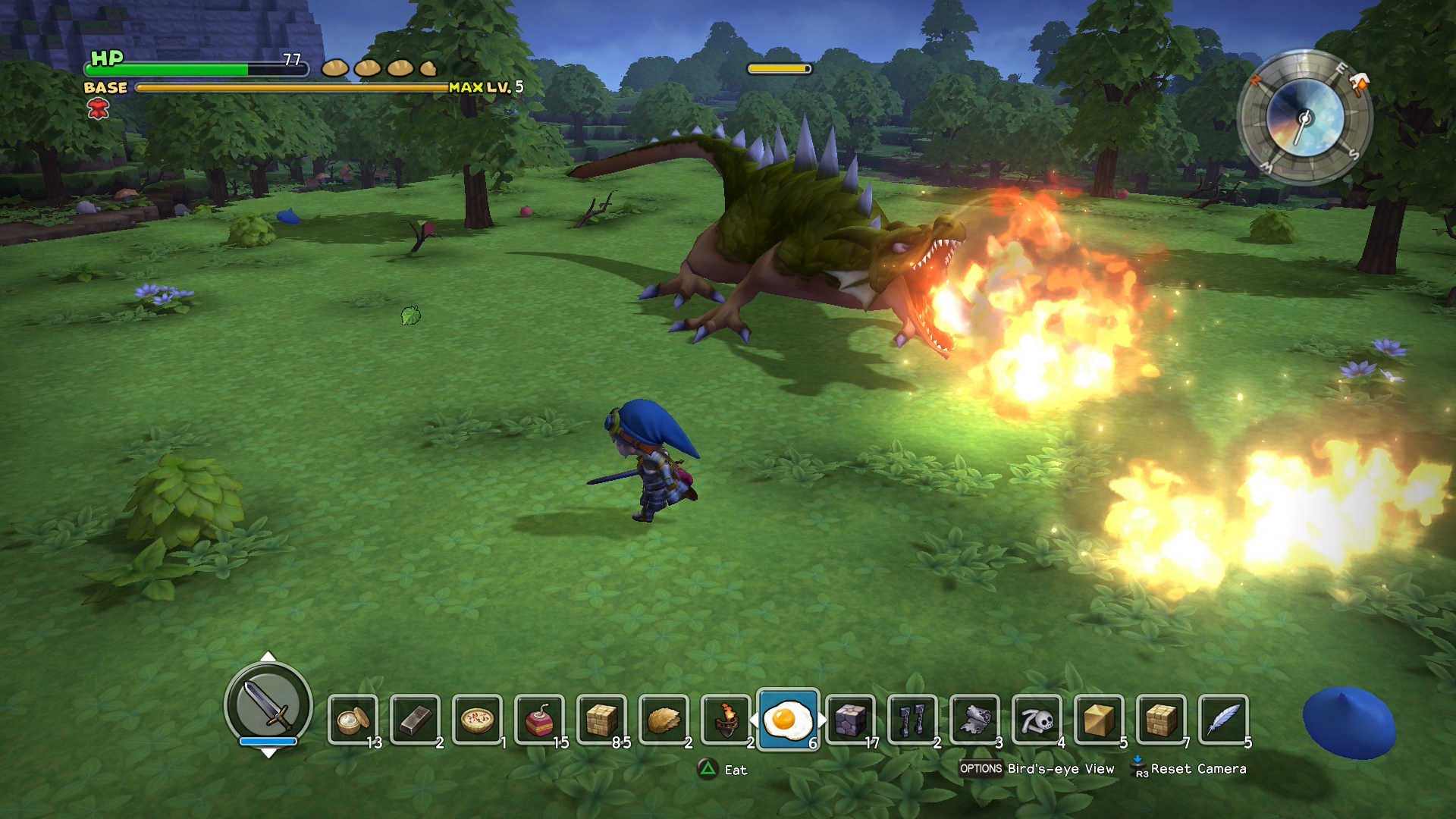 Overall Dragon Quest Builders is a fun and simple game. Its one that could target any audience be it fans of Dragon Quest or fans of Minecraft. However those looking to sink their teeth into a deep RPG (levelling up etc.) driven game you may be disappointed its open world RPG elements are great and this is a very strong entry for the ever dying PS Vita as well. Its Base levelling up system is as deep as it gets and once you have the rank needed to progress the story there is little point in updating it further unless you wish to do the challenge’s. Overall Dragon Quest Builders is a nice rewarding experience which does everything you would want a building game to do. Its great at what it does and that’s all that matters.