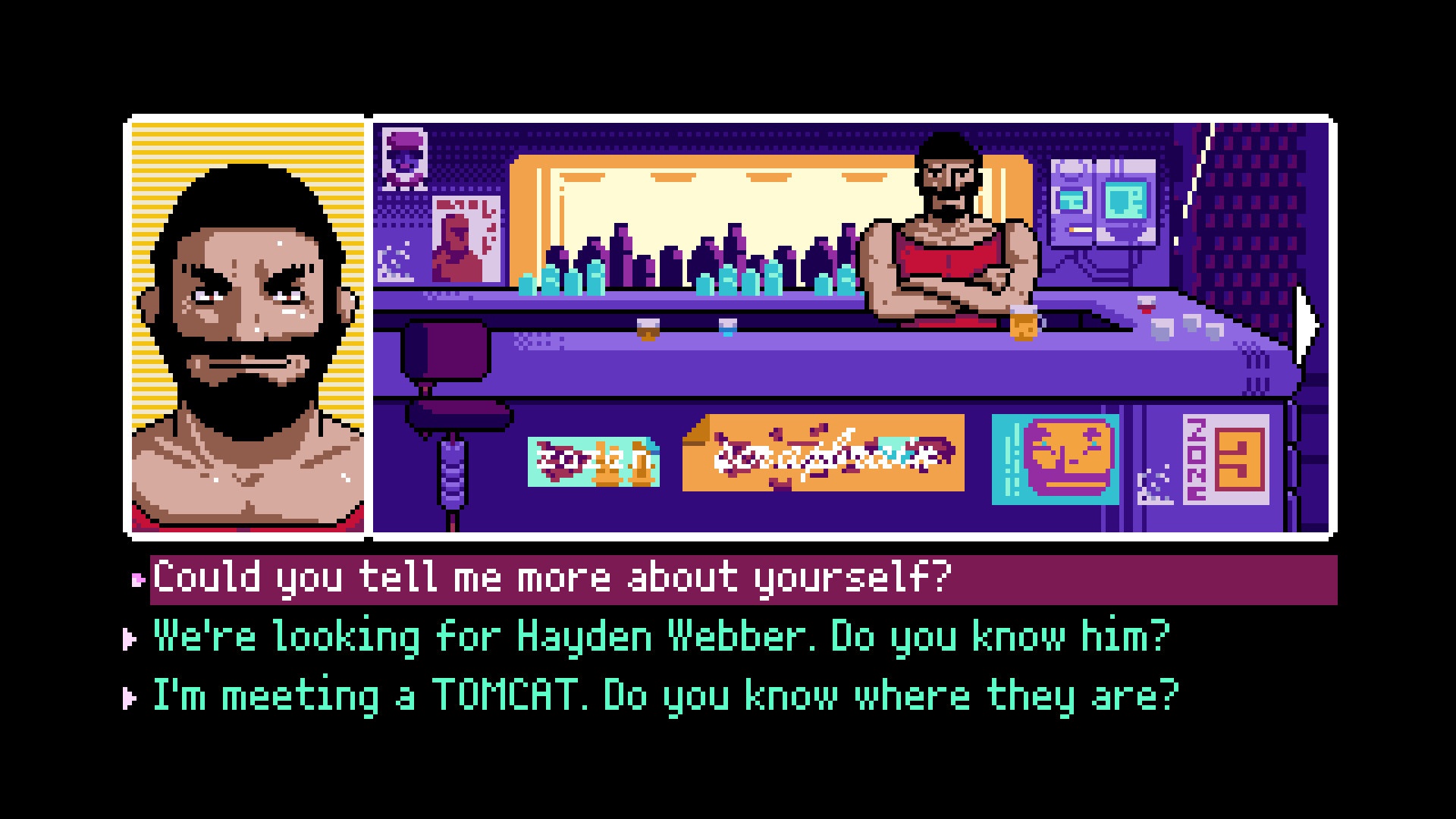 There has been a huge influx of point and click adventure games in the past few months, but few of them capture the truly retro aesthetic that 2064: Read Only Memories adopts. Looking every bit like a classic from the late 1980’s, 2064: Read Only Memories draws artistic inspiration from games like Beneath a Steel Sky and Snatcher, whilst the plot aligns very closely to alternate future yarns such as Deus Ex or even Blade Runner.

Thankfully, the plot is well written and well handled, and it didn’t take long for me to become deeply entrenched in the off-record search and rescue mission that takes centre stage in 2064: Read Only Memories. Following a brief introductory sequence, the player is introduced to Turing, who is the worlds first self-aware robot. Turing is kind of a big deal in a world where many humans choose to splice their genes with animals and others are enhanced with mechanical parts.

The missing person that we’ll spend the next ten hours or so searching for is both Turing’s creator, and the player characters friend and former colleague. Within minutes of meeting Turing and hearing about Hayden’s disappearance, it rapidly becomes apparent that the real motive for kidnapping Hayden must be related to Turing. Whilst this main plot vehicle is clear and simple, there is much more to 2064: Read Only Memories than simply locating a lost friend. 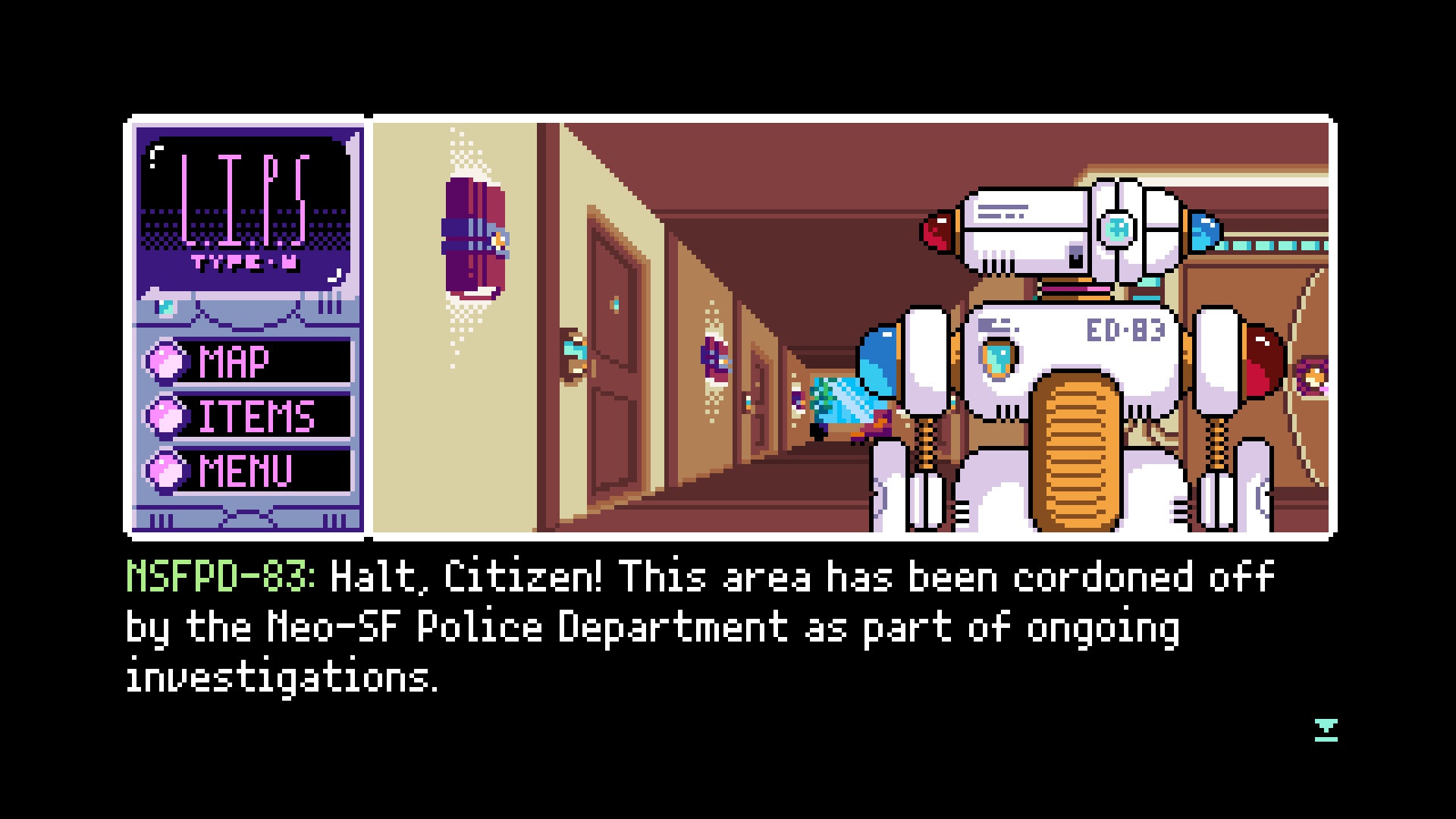 Indeed, 2064: Read Only Memories uses this traditional and relatable tale as a skeleton to hang its broader messages on. As the product of a successful kickstarter project launched by GaymerX, 2064: Read Only Memories features multiple, interwoven plot lines that relate to freedom of choice, gender identity, sexuality and more. Characters in 2064: Read Only Memorie’s are rarely straightforward, and most bear the scars (both mental and physical) of oppression, segregation and isolation depending on how extreme their choices are deemed to be by the rest of society.

With these interlinked themes in mind, 2064: Read Only Memories is clearly a game about inclusion, and it is refreshing to see a vision of the near future that tackles tricky subjects directly and openly to the extent that they are completely normalised within the isolated fiction of the game. 2064: Read Only Memories makes the point that in a future where people grow cat ears to make themselves feel more self-assured and natural, or add a mechanical limb to enable them to work, the last thing others should worry about is the sexual orientation or gender identity of others.

The point is, I think, that 2064: Read Only Memories seeks to demonstrate that people are complicated, and that their motives are just so as well. 2064: Read Only Memories often reminds the player that if someone has chosen to splice their genes with an animal, or to assign their gender based on how they feel and not how they look, then it isn’t anyone else’s business. This is an important message to deliver across all popular media, but it can occasionally cause gameplay in 2064: Read Only Memories to stutter where the player is forced into confrontational dialogue even when they would normally choose to be more sensitive. 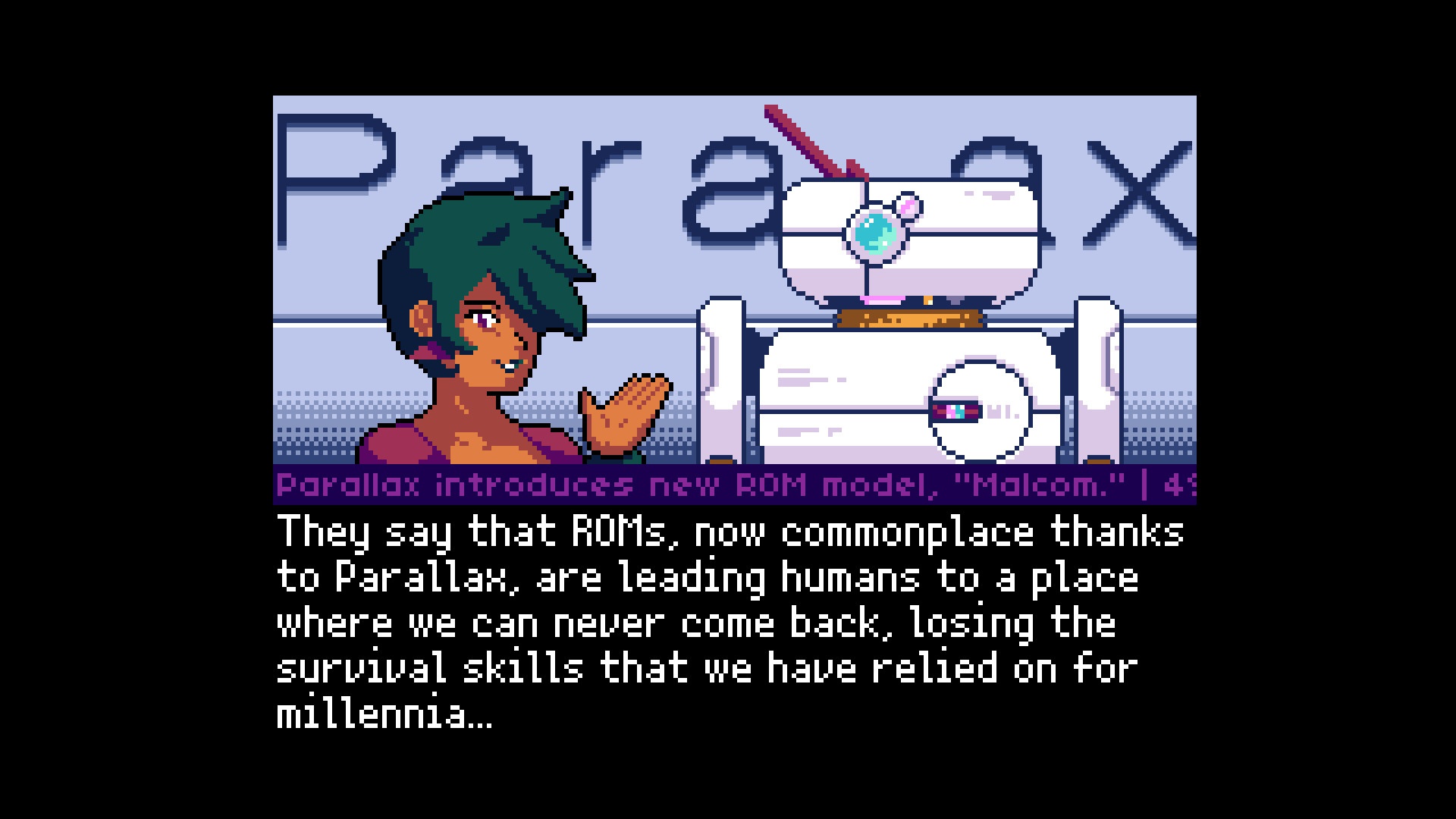 Indeed, there are so many characters in 2064: Read Only Memories that have made choices that the game wants to draw attention to, that it can sometimes be difficult to force the game forwards in a natural way. Take the first encounter with a hybrid, for example. The player is in a bar searching for a named contact, and there is enough evidence to suggest that one of the bystanders could be that contact, so you are likely to ask them directly. Doing so will result in an angry outburst about presumption, which does reflect a real challenge that the LGBQT community faces. In gameplay terms, it serves as a lesson to the player not to assume anything.

Thankfully, the dialogue in 2064: Read Only Memories remains at such a high standard that you’ll likely forgive the slightly clumsy response options on the rare occasions that they do occur. The script and voice acting in 2064: Read Only Memories is superb, and although the game does feature a handful of puzzles, mini-games and inventory challenges, you’ll spend the vast majority of your time talking to people and advancing the story. You won’t mind though, because the rich cast of characters (mostly Turing himself, who is still coming to terms with his recent awareness) is what really makes 2064: Read Only Memories enjoyable to play.

Overall, I found 2064: Read Only Memories to be hugely enjoyable. The occasionally forced dialogue serves its purpose to inform players of the broader struggle that its creators wanted to highlight, without causing a huge narrative impact. The puzzles are simple and refreshingly straightforward for a game of this kind and are unlikely to halt progress, but again that only serves to keep the player focussed on the story, which is where the main pleasure in 2064: Read Only Memories lies. There are numerous endings which broadly range from bad to good, and they are largely informed by dialogue choices which has the slightly condescending effect of “teaching” the player how to respond to people in certain ways to get the best results, but again, that didn’t bother me.