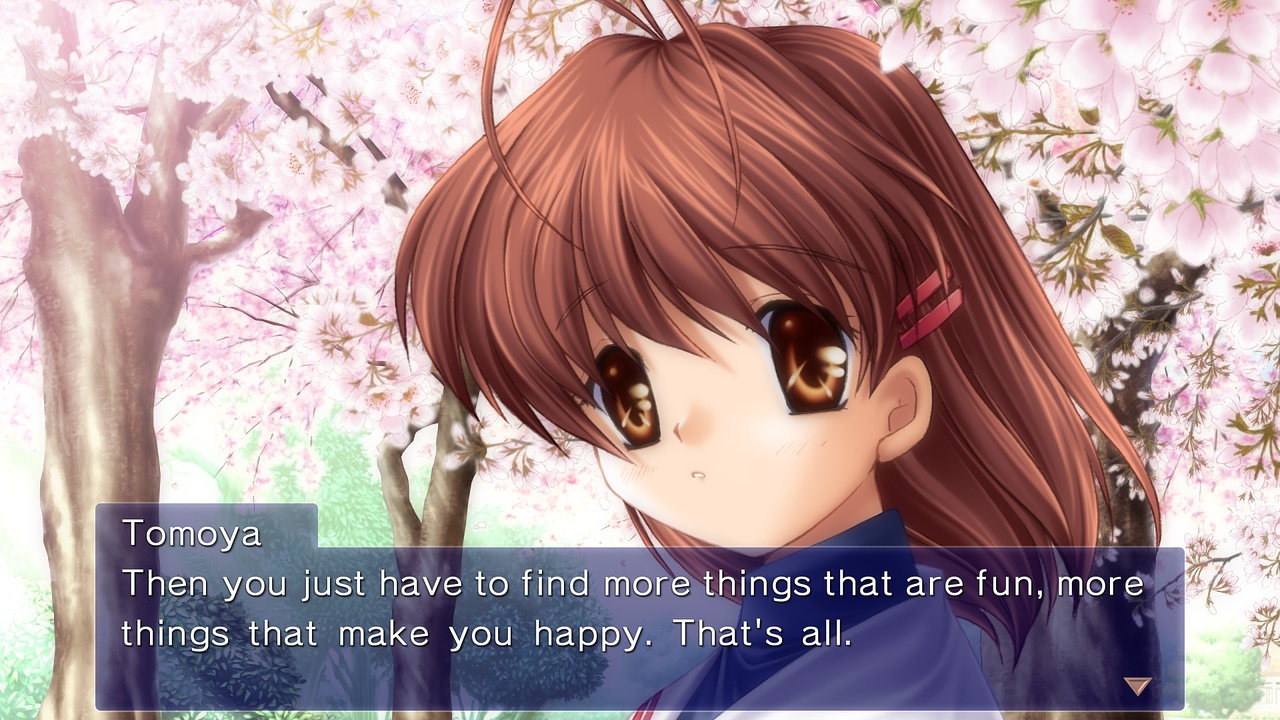 Reviewing CLANNAD is a dangerous and difficult task to undertake, and I’m not trying to sound funny or clever in that assertion. For many people, this is THE dating simulation visual novel, the one that requires you to play it over and over again until you peel back the layers and happen upon the deep, serious and heartbreaking secret inside. People swear by this game, people have changed their entire perspective on visual novels because of this game, anime series have been made and even localized based around this game, and now it’s on the Switch. Putting visual novels on the Switch is one of the best things to happen, as it’s a game series that takes an astonishing amount of time to “play” despite relatively passive play style (mostly reading and making some decisions). So to carry around Fuko, Kotomi, Tomoyo and Nagisa (and more, I can’t write everyone) everywhere you go is probably a dream come true for many. Those people aren’t going to read this review: they already bought the damn game the second it was announced. This review, however, is going to try and help non visual novel players try and understand what the appeal of this particular title is, and, more importantly, why it’s launching at a staggering 45 dollars.

At its core, Clannad is a love story, albeit a very convoluted and strange love story. You play Tomoya Okazaki, a third year high schooler who is looking at the world through a dark and borderline nihilistic lens due to the death of his mother, the distant relationship with his father and a best friend who is on the lighter side of delinquency: in short, we’ve got a boy with very little to live for, but not enough actual emotion to do something about it. That is, until he meets Nagisa Furukawa. Nagisa is a year older than Tomoya, but is repeating the 3rd year on account of her sickness from last year. Tomoya isn’t instantly drawn to her and there are fireworks: this isn’t that kind of love story. Instead, Tomoya and Nagisa’s worlds gradually combine through a series of choices, from helping Nagisa reform the drama club to finding out if Tomoya might still have a passion for sports. Naturally, Tomoya and Nagisa aren’t the only students in their school, and, by and by, you learn to interact and find out more about the friends and companions around you. And right when you have everything figured out is when things really hit the fan, and you realize what the hell people are always blathering about with Clannad.

It should be noted that Key, the developers of Clannad, always made the game with a general audience in mind, so there isn’t anything that’s been watered down or changed in order to make this game Switch friendly. From the get-go, Clannad is an all ages branching visual novel with the opportunity to date and discover relationships with several different characters. Though not as heavily set with elements as some other games (World End Syndrome, for example), Clannad still asks you to make multiple choices in various situations, talking to people in different tones or making decisions on how you respond to a given situation. The end result, ideally, should be that Tomoya ends up with Nagisa, but that isn’t going to happen right away. Instead, through several iterations of the game, you’ll end up learning a ton about the cavalcade of characters, with almost everyone you directly encounter having their own “route” and ending. Not all endings will be romantic, by the way. Sometimes you’ll happen upon the right combination of events that prevents you from ever really deep diving into the world, such as the popular “Baseball” ending that makes it feel like you’ve just played an anime version of The Sandlot. Still, everything has its purpose, and that’s what sort of makes Clannad such a famous and infamous game, as you will need to invest, and I’m not exaggerating, close to sixty hours of playing and replaying to get the true “experience.” 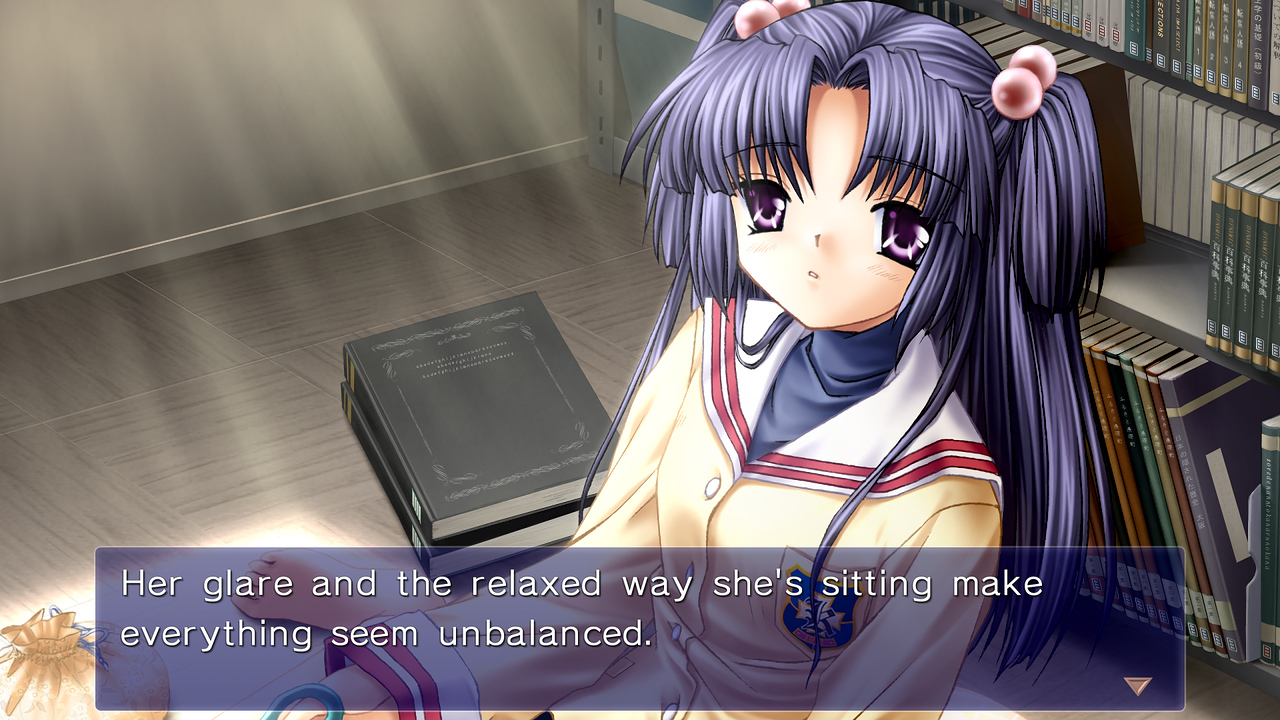 As a visual novel, Clannad is wonderfully done on most aspects. The character dialogue is well developed and eloquent, and totally freed of those moments where suddenly we’re talking about sex appropos of anything. No one is high fallutent, but we also don’t have a ton of conversation that’s meandering and meaningless. Every time someone opens their mouth, no matter how innocuous it might seem, they’re dropping hints about themselves, their world, and the future. While there’s still a fair share of general conversation and banter that occurs (especially with the other male characters), you get a scope of the world at large inside Tomoya’s head. He really is a kid who is hurting, who feels like he needs to take control and do whatever he wants rather than continue to spiral out in a city that doesn’t care for his well being, and it takes guidance and care from other people to finally get him into one mindset or another. This is one of the main reasons that the game does take a while to get through. Even though the text is formatted to keep things paced out and not become walls of reading (a problem I had with Umeneko once upon a time), there’s a lot to take in and a lot of information to process.

Players are told, from the very beginning, that Tomoya should, theoretically, end up with Nagisa by the end, but the path there is neither easy nor clear. As we’ve stated, words aren’t minced in Clannad, and the characters themselves are very genuine and honest in what they’re attempting to do in driving forward and establishing relationships with our protagonist. There’s a reason that people choose sides and develop the bizarre “best girl” lines when it comes to visual novels: the writers have made it so that you feel connected to what each and every person has to say and what they feel for you. With the additional layer of sex totally absent, you’re facing the interpretation of real, pure affection that grows, and the results can be, well, devastating. There’s one particular route that hit exceptionally close to home because I lost a classmate when I was in high school, and I didn’t realize that she still resonated in my head until I watched Fuko try and try to connect with me, and then, suddenly, she was gone. This game is as much about trying to flay your emotions raw as it is telling a story, and, I’m sorry to say dear readers, falling in love and finding a fairytale ending with Nagisa is only the first half of the story. 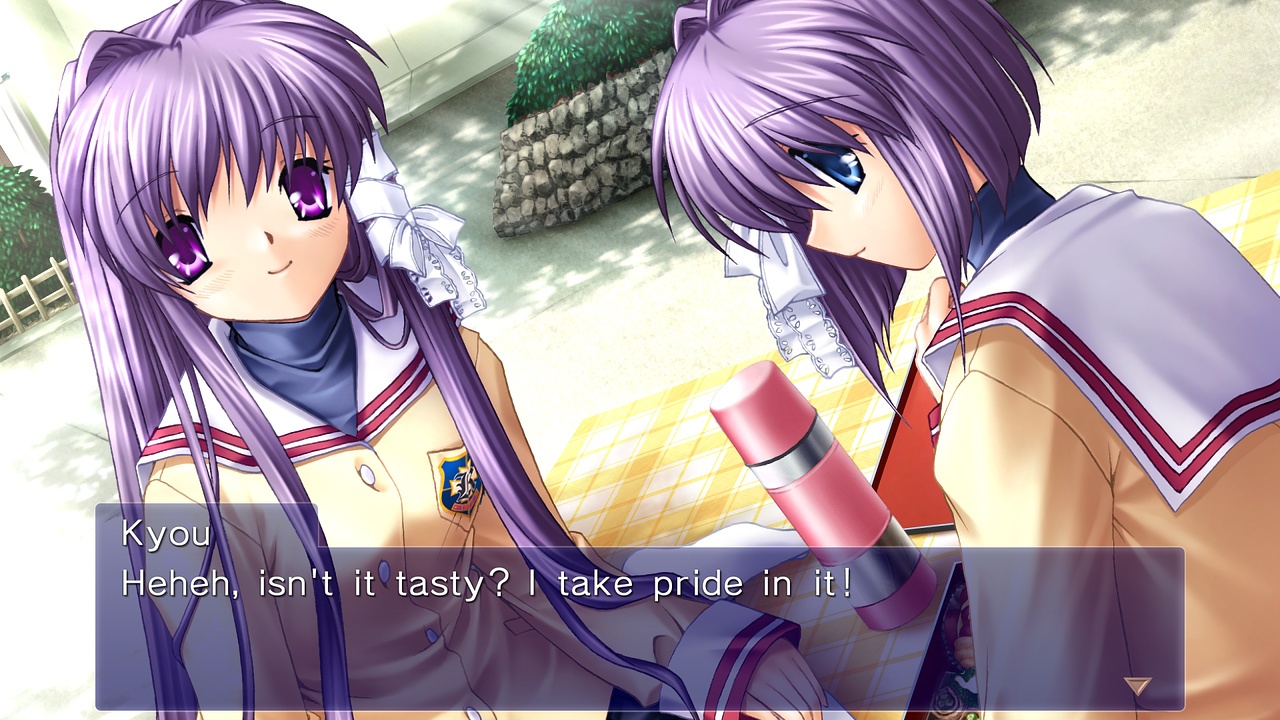 This seems like a good spot as any to remind people that Clannad is rated for older people, and it’s half-heartedly explained in the rating system with some expletives that are peppered into the dialogue. This is a game that will hit you, hard, like a sucker punch from a semi truck, and leave you gasping for air. Far from the sort of squeamish affects that one might get from playing Heavy Rain or watching a Miike horror film, Clannad takes romantic tropes and ideas and obliterates them with the second half of the game, in which we see more of the psychological dissolvement of Tomoya’s fragile reality. There is something about watching a happy ending just ruined that kills you internally, and then the desperate, needful attempts to make things right. This is, thankfully, a video game, and there is a possibility to find salvation, but it’s a hard road to walk and to tread through sadness again and again. Part of me feels like you shouldn’t play this game if you struggle with your emotions, but, from what I’ve heard, it really helps people grapple with certain elements and come to terms. We all process depression and grief differently, but please be safe before embarking on this trek through the gamut of the human soul.

Many of you may be looking at the price tag and balking, but it should be noted that this is a seriously loving port of Clannad to the Nintendo Switch. The interface and menus are buttery smooth and incredibly responsive. Keys have been bound to make quick saving and loading a mere thought, and the menus can pop up and disappear within a heartbeat. The Dangopedia is in full effect, adding different information to the Japanese vocabulary and various elements of the world around Tomoya. You can play it in English or in Japanese, and the voice work is spectacular (though Tomoya remains unvoiced, which I’m perfectly okay with). The soundtrack, which is a sweeping and ambient score, is unbelievably mastered for 5.1 surround sound, and PROTOTYPE (the publisher) actually suggests using an HDMI to PCM Linear dongle in order to hear the music in full effect. I’ll have to take their word for it, but it’s beautiful on my own piddly headphones. The graphics are also fully 1080p remastered, so you have the absolute best of music and visuals in order to accompany this breathtaking story of family, love, innocence and loss.

For some, it might be overhyped. For others, it may be a long, boring and simpering tale of a boy who couldn’t deal with a sad world until he met a girl sadder than he. But, for still others, this is THE visual novel, and I can see why. Clannad is truly wonderful, and people who enjoy visual novels should take the time to sit down at play it, even if it means saving up to get this game “someday.” It’s expensive, but you get what you pay for: hours upon hours of story, of choices, of possibilities and of love. Come along. It’s time we started to climb up the hill. The long, long hill.

The matriarch of the visual novel world has come to the Switch, and allows a new generation to see if they, too, can get dehydrated from crying too much.