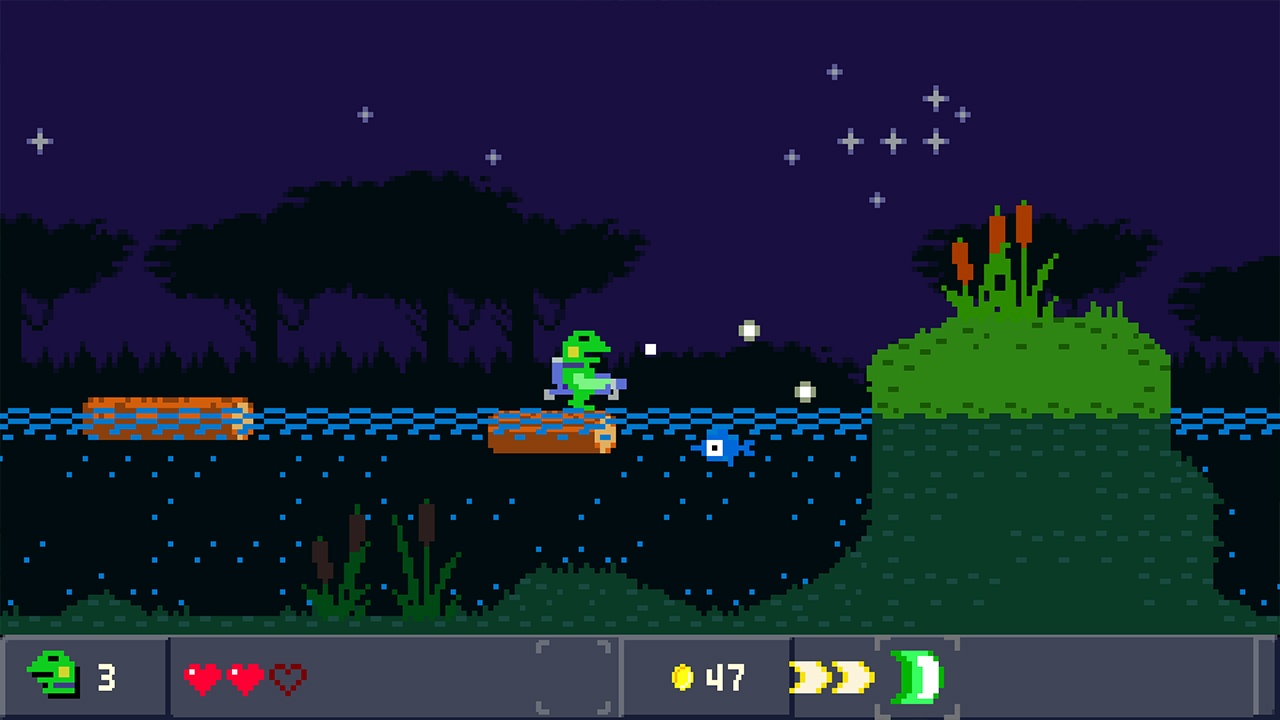 A lot of people like to poke fun at the United States for how much their employees are ferociously overworked and how paltry the compensation seems. For many countries and people in Europe, the concept of working and being paid for your work is pretty straightforward, and that treating your employees like human beings who need to rest, recover and not work nonstop is just common sense. Yes, the working person of USA tends to be on the short end of the stick, with a handful of areas and cities slowly piecing together how to prevent burnout from their best workers. However, if anyone’s ever taken a look at Japanese culture and workplace ideology, the US seems downright relaxed and worry free in comparison. Some call it a cultural thing, some call it genetic, and some call it a goddamn problem, which it is, but no one is really looking to fix it because employees who take a stand against overwork generally get the axe. So the only way to compensate is to try to find the humor in it. Things like Karoshi have been darkly funny puzzle games that have existed for a while now, but very few games are willing to take on the workload itself as the enemy. No person is willing to do so…but what about a frog?

Kero Blaster is the tale of a nameless frog who worked for C&F Inc., a company dedicated to…work, I suppose. Our frog hero’s job is to go to different areas and wipe out “problems” that crop up, and these problems take on a couple different forms. Most notably, the problems are dark, shapeless, angry blobs that are the physical manifestation of missed opportunities or painful memories. Why on earth these are appearing and why a frog is in charge of getting rid of them, I guess we’ll never know. But armed with a crack team behind him – a cat CEO, a cat scientist, a pink thing that’s an office lady, and various salesblobs – our amphibian leader will charge into a variety of worlds, gun blazing, to take out the menace at hand and, hopefully, clear the company backlog so we can finally stop working overtime. But just when vacation seems to be in sight, BAM! More work appears. What’s a frog to do? Keep your head down and just keep blasting!

Kero Blaster comes to us from Studio Pixel, who is best known for Cave Story (which launched on the Switch over a year ago). Despite having some of the same names attached, Kero Blaster and Cave Story are wildly different games. Far from being a story driven metrovania, Kero Blaster is a side scrolling action game, asking you to blast through five different worlds, complete with bosses, to get the job done for your company. Between worlds you’ll see a bit of exposition to help explain the story as it unfolds in both the original game and the “Zangyou” (overtime) mode that comes afterwards. Kero has the ability to jump, shoot in three directions, change weapons as he finds them and, eventually, double jump with the aid of a jetpack. The weapons he finds can be powered up at shops scattered throughout the worlds, as long as he was able to find enough coins dropped by enemies and from hidden chests that are sprinkled here and there. Initially, you can take two hits before dropping, but, with cash and time, you can extend your life meter, get an emergency refill jar (replenish four hearts when you drop to zero) and even buy extra lives, though I highly discourage against the latter. You’ll eventually be able to just find some in the course of spontaneous drops and hidden-in-plain-sight lives. 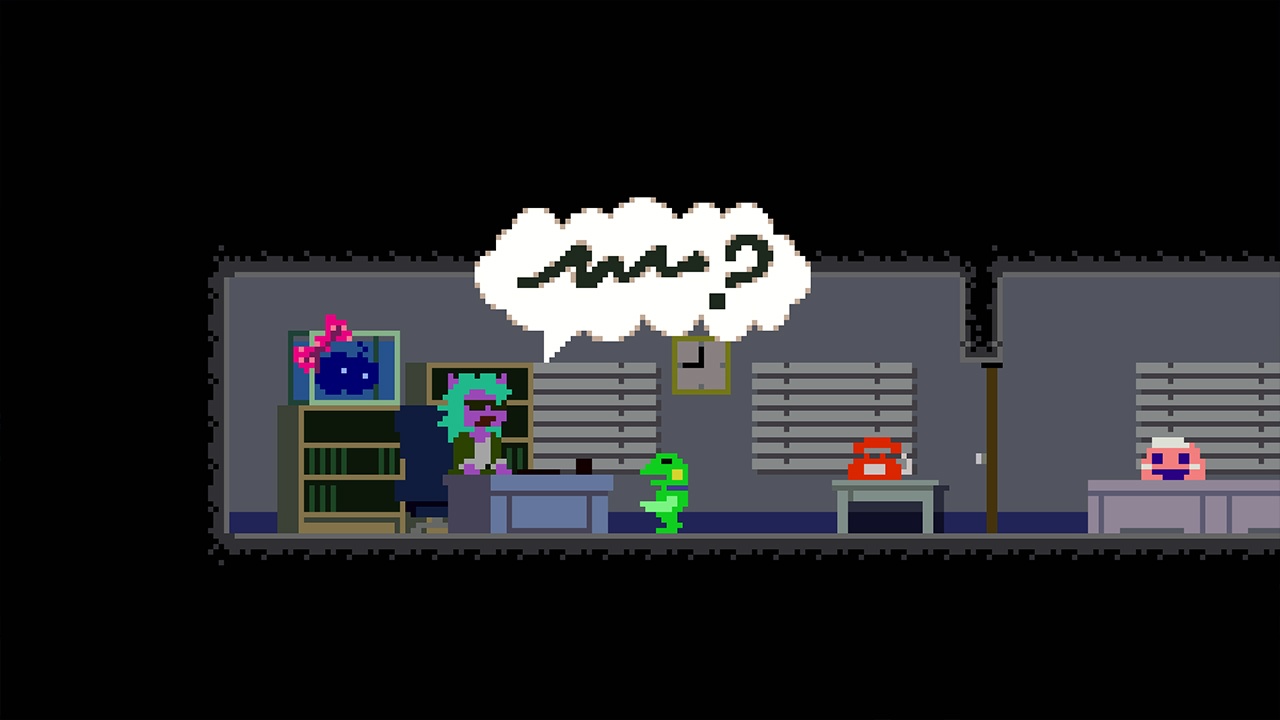 In terms of gameplay itself, Kero Blaster is a curious but satisfying experience. Compared to how many modern platformers and shooters function, Kero Blaster feels, initially, quite clunky and basic. You can’t even aim down, a long-suffering fact considering how many times you descend on enemies. The jump process is stilted and very rigid, and the jet pack does very little to aid this since it’s inherently quite fickle. You need to jump at the apex of your first leap in order to maximize the jet pack’s efficiency, and you will, inevitably, fall short on an important jump. It’s a style that lends a lot of assistance to players from the 8-bit generation, because it mimics a lot of the limitations that the early games had in terms of movement. However, once you get into the feel for the game, you start to realize how deliberate things are. The frog acts and moves in a way that best suits the game and, strangely, you appreciate it more for that. The visual representation of things are large-scale pixels, a much rougher showcasing than Cave Story, but the movements and gunplay work well with that and follow suit.

I actually quite appreciate the weaponry of Kero Blaster, which will give you a total of four different guns to choose from, each with 2-3 power ups that they can attain. In terms of sheer power, you’ll want to get the standard blaster to max, but each of the others has their own appeal: I personally love powering up the wave gun to make it a scattershot of bouncing shuriken. However, the weapons don’t come from the shops: they come from boss defeats, so you don’t HAVE to spend a cent on them if you don’t want to. It’s entirely possible to get through the game without powering up the guns once, but it is sincerely recommended. Coins get bigger and more valuable as you move through the stages, and, by the time you reach the last level, the amount of cash that enemies drop is so ridiculous you might as well grind for a bit to fully charge up everything. You never know when a whirling flame circle could come in handy. And yes, you can grind: Kero Blaster follows some old rules about respawning enemies as soon as you leave the room, so finding a sweet spot for plenty of drops without much damage risk can be an investment all itself.

Just because pixel graphics are at the center of it all (and we wouldn’t expect anything less from Studio Pixel) doesn’t mean there isn’t some fantastic graphics and design throughout. The lesser enemies all have unique shapes and attack patterns, from the early spitting plants to the angry refrigerators that you run into later on. There’s even a really interesting enemy who hides in a giant polar bear head, which is cute until he throws the head at you as a last-ditch attack and it instakills you regardless of health or if you’re wearing the special jacket that absorbs one hit. But the design also spills into each of the worlds, which are uniquely memorable and beautiful. A swamp, an ice world, a mostly underwater world, something in a construction yard, and, my personal favorite, a short-but-violent time on a train. You’ll want to have the volume up as well: the music is some of the best chiptune that a game has to offer, and it really helps capture the retro feeling of this honest and exciting title. 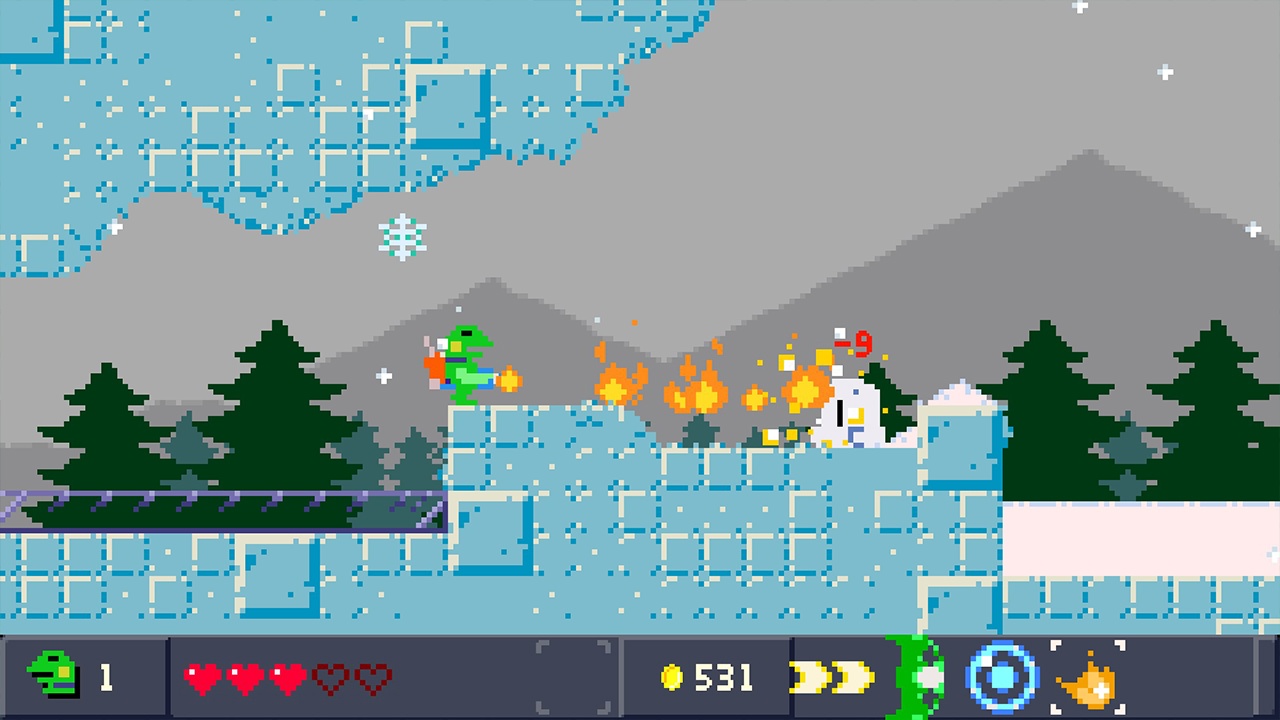 In terms of difficulty, Kero Blaster has an odd balance, and that’s mostly due to the history of the game. You see, Kero Blaster is quite old, and used to be pretty simple, enjoyable, but damn short. Players coming at this for the first time will be surprised to see the credits roll after only about an hour or so of gameplay, and that used to be it. But that’s where “Zangyou” mode comes in. Dubbed as a “hard” mode, Zangyou mode is more like a amped up revisiting, like when you get to go back to Kanto in Pokemon Silver/Gold. You see the levels you just experienced, but the layout and the enemies and their attack patterns are ALL different. The expectation for jumping and landing precisely while dealing with a ton of interference is higher. With the “normal” story, longtime platformers won’t really feel the pinch until about world four or five, and that might even be fleeting once you discover patterns and ideal weapons for each of the boss encounters (seriously, that goddamn clock boss). With hard mode, however, you’ll be assaulted the second you touch down, and suddenly it feels like things just got real. Even though you just saw the credits and “beat” the game, you’re now in the real challenge, and things are godawful in terms of staying nimble and precise. It doesn’t help with the atmosphere of it all, either.  The first mode, story plays out that we’re trying to get through the work together and maybe save someone who’s been infected with bad vibes. Zangyou time, though, the frog is literally blasting through overtime work that’s being generated by an infernal machine, while the CEO and the pink office lady live it up on vacation, wondering what’s taking the frog and the cat scientist so long.

But Zangyou mode is also what makes Kero Blaster worth the price of admission. There are more levels, more details, more excitement throughout. The soundtrack is longer and filled with extra songs, there are places you’ve never seen before (including the beach level, which I adore), and there’s a great parallel between work and life. At some point you’ve reached maximum potential in terms of weapons, heart containers and extra lives, but you can’t just stop going. So you keep collecting money you don’t need, doing work you don’t necessarily want to do, because that’s your job and that’s what’s expected of you. Okay, no, it doesn’t get that dark or surreal, but it’s called frigging Overtime mode. Is this a moment of awareness or unawareness? I’m not totally sure, but it’s good to see the frog take on the giant machine and try to get some time off for everyone. And, if you enjoyed the first half of the game, then Zangyou is a significantly more exciting, more difficult and more challenging overall game.

The only downside is that there’s very little reason for current Kero Blaster owners to get it on the Switch. There’s nothing particularly exciting here except for the great icon. There’s no options for using rumble, HD or otherwise, and the achievements are here but only present as stamps in a separate menu. The game is whole and complete, though, and it runs like a dream. No matter how frantic things got, there was never any stuttering, slowdown or otherwise poor performance. Kero Blaster looks phenomenal on the big screen, and playing it on the Switch is, hands down, the best mobile experience. If someone tries to point to the iOS version as a viable, cheaper choice, be sure to ask them to attempt Zangyou mode with touchscreen controls. If you love Kero Blaster or simply love a great, pixel-perfect challenge, then getting this Switch version of Kero Blaster will be well worth your time.

Pixel Studio’s delightful frog hero leaps onto the Switch with all the humorous difficulty you could possibly want on the go!