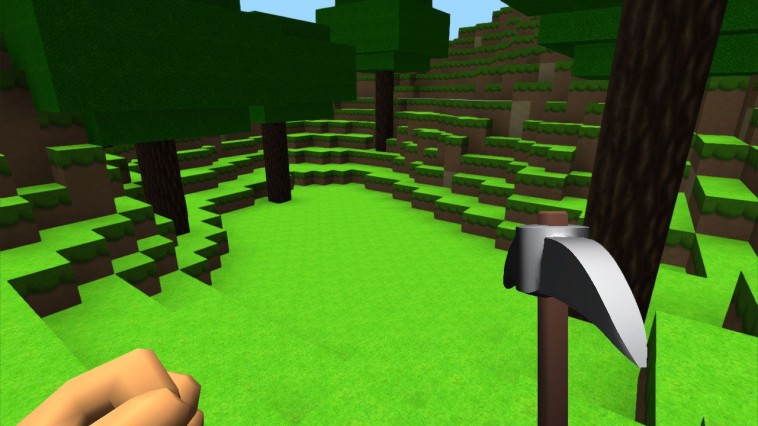 Not all applications sold on consoles or through distributors such as Steam are necessarily games in the truest sense of the word. A lot of applications such simulators or interactive tours may looks like video games at a glance, however if there is no challenge, method of scoring or victory condition then can it really be called a game? That doesn’t mean to say a simulator or first person tour can’t be equally as fun or enjoyable.

Stone Shire is a program that falls into this category. It’s a simply foraging and crafting program in which you walk around a virtual world, salvage raw material such as wood or stone, and then construct your own buildings and landscapes from it. You play in a first person perspective, you use shoulder buttons to use hand tools, you collect items and you can access an infantry system… but there is no end goal. No big boss to fight, no one to rescue, no McGuffin to locate. It’s a title that you play for the simple joy of playing it, but how much joy can you expect?

I really wanted to attempt to review Stone Shire purely based on its own merits, but that’s the problem. None of this titles merit is its own. Stone Shire is a clone of the phenomenally popular 2009 title ‘Minecraft’, and unfortunately it’s an extremely stripped down version to say the least.

When I first loaded up Stone Shire I quickly learned that this title was designed to be played on the TV, using the WiiU gamepads touch screen to select infantry and crafting items. There is no option to play the game solely on the gamepad and no pro-controller compatibility. I found this to be a little disappointing but not a deal breaker. Some extra control options would have been a bonus. 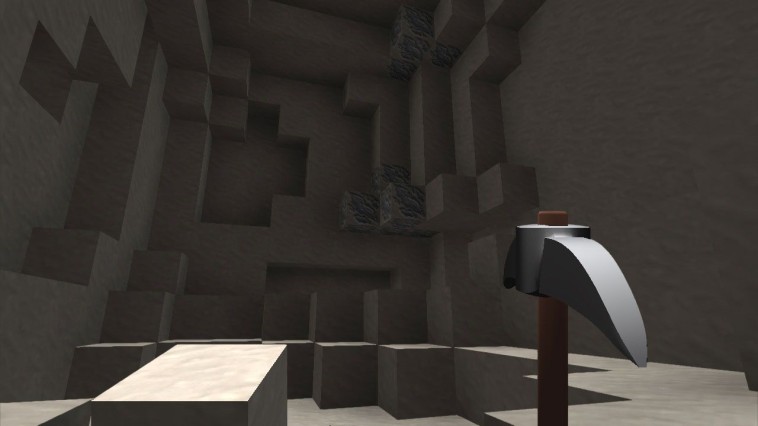 Within a very short space of time I began to notice many of this titles shortcomings when compared to Minecraft. Firstly you are given the option of a style of terrain. You can choose to play in a bright woodland environment, a snowy jungle or a desert. The reason I consider this a shortcoming is because in Minecraft whenever you load up a new map you are dropped into a huge environment that will incorporate several different styles of terrain, all of which have their own unique benefits and disadvantages. However in Stone Shire the world you are in has an option of three different coats of paint and you can only apply one at a time. I also didn’t really notice any major differences between the three zones as far as unique items or material goes. It seemed like nothing more than a pallet swap to me.

The second thing I noticed was how incredibly small each world was. In Minecraft I can walk, run, swim and sail all over the randomly generated land for hours on end and encounter very few, if any restrictions in the size and scope of the playing field. However, shortly after beginning my first game of SS I was greeted with an on-screen prompt telling me that I’d reached the edge of the map and couldn’t proceed any further. I turned around and walked in the exact opposite direction and in less than a couple of minutes I’d reached the field limit at the other side. Stone Shire’s levels are absolutely tiny. You could build a couple of houses or a large castle, but if you’re thinking of building a town or something on a large-scale then you are going to find yourself running into problems.

When playing Minecraft, one of the elements that really makes the experience such a pleasure for me is the presentation. Yes, the world is made entirely of blocks with low resolution textures, however when I am walking along a beach between an ocean of sea life and a tropical jungle, all the while listening to the peaceful, relaxing piano music, I can’t deny what a wonderful virtual experience Minecraft is. I can’t say the same about Stone Shire.

The textures on each block seem to be slightly higher res than Minecraft, however there is so little variety in how many textures you see on-screen at once that everything looks bland and boring. There is no water, animals, NPCs, threats. The world just looks pretty dull overall.

That only applies to what can be seen, another big issue was what couldn’t be seen. Stone Shire suffers from the same issues that many N64 games used to have in the forms of fog and a short draw distance. Considering how small each level is I was pretty surprised that this title couldn’t handle a bigger draw distance, however as you walk around you’ll be able to watch the landscape constantly loading in front of your very eyes. 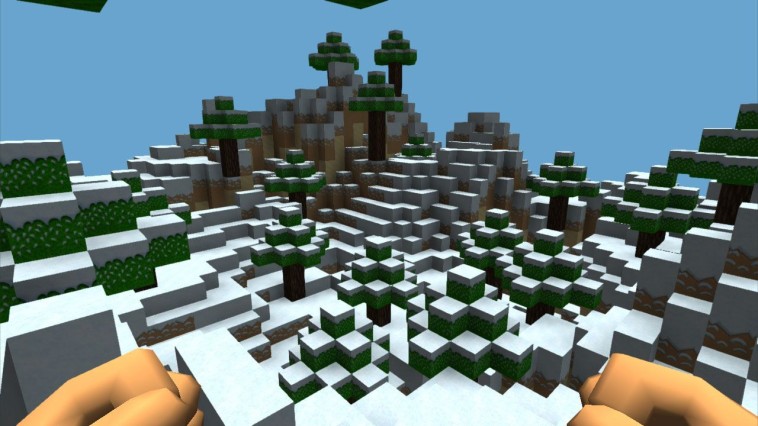 I wasn’t overly impressed with the music in Stone Shire. I feel as if it aimed to capture the relaxing, tranquil mood of Minecraft but some of the pieces really missed the mark. When digging underground I encountered some music that I can only describe as an ominous drone. It was a low-pitched electronic dirge that I’m assuming as attempting to create a tense atmosphere. Since there are no enemies or threats to deal with I felt this music was misplaced.

As for the building, Stone Shier is pretty limited in what you can create. You can place and stack the material that you’ve mined however there are very few options for crafting your materials. In Minecraft there are hundreds of items for you to craft and use within the game. For example, if you wanted to lay carpet in your house you would have to mine some iron, create a pair of sheers, sheer some sheep to get wool, crush flowers to make dye, use the dye to colour the wool, and finally use the fiber in the wool to create the carpet. It’s these crafting mechanics that allow Minecraft players to furnish their creations with more detail than can be achieved in Stone Shire.

I realise at this point that it feels as if I’m beating Stone Shire mercilessly with a Minecraft shaped hammer, but other notable absences would be the lack of a ‘Creative mode’ (the ability to build with unlimited resources) and any form of multiplayer, be it local co-op or online play.

If someone was to show me Stone Shire and tell me that it was an extremely early tech demo in Minecraft’s development I could easily believe it. As it stands it’s difficult to judge Stone Shire as its own product since it doesn’t offer a single unique feature. If you do not already own Minecraft and this sort of title appeals to you then Stone Shire may offer you a couple of hours distraction at best, however since Minecraft is now available on WiiU I would strongly advise paying a little extra and buying the real thing.