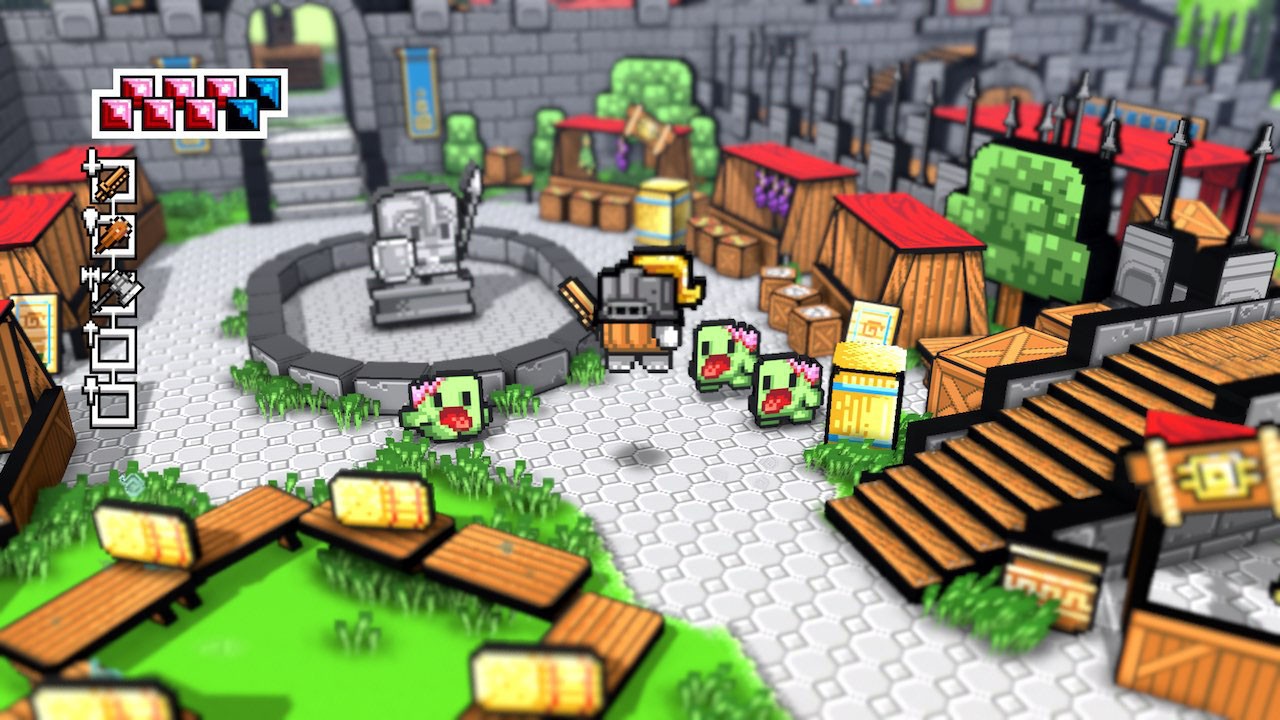 Nindie Showcases are never regarded as the most exciting of Nintendo’s events, seeing lower viewerships and unwarranted backlash for not announcing a new fighter for Super Smash Bros. Ultimate. This was true of the August showcase, but one title, in particular, caught my eye for its unique style and interesting gameplay mechanics- Skellboy.

Skellboy is set in the Cubold Kingdom, where the King’s magician, Squaruman, has set out to terrorise the people after the princess stood him up and rebutted his advances. He does this by raising a legion of undead warriors, but unfortunately for Squaruman, he also revived the protagonist, Skippy the Skeleton, who sets about to restore peace to the kingdom. This isn’t your standard Mario-type story of saving the princess, however, as there is more to Squaruman and your own character than the story initially suggests. Despite the imminent danger facing the Cubold Kingdom, Skellboy doesn’t take itself that seriously, sprinkling humour into every aspect of the game. Whether it’s the storyline, NPCs dialogue, or item descriptions, Skellboy will have you giggling to yourself throughout.

The distinctive mechanic of Skellboy revolves around switching out your body parts with those from defeated enemies or items found around the world. These combinations can upgrade your health or offer unique abilities, some of which are needed to progress through certain areas. Alongside this, there are five weapon types available, each offering different ways to kill enemies that swiftly crumble apart once beaten, in a way I can only describe as an oddly satisfying Paper Mario/LEGO crossover I never knew I needed. RPGs tend to use the same enemies or weapons, albeit with different colours, to pretend their games have more content, and so it is refreshing to see Skellboy include a large variety of enemies, body parts, and weapons to keep the game exciting. The weapons and body parts are in keeping with the games comedic slant, offering players the chance to fight with baguettes, leeks or cardboard swords whilst sporting a pumpkin or hay barrel as a body and a bomb as a head. 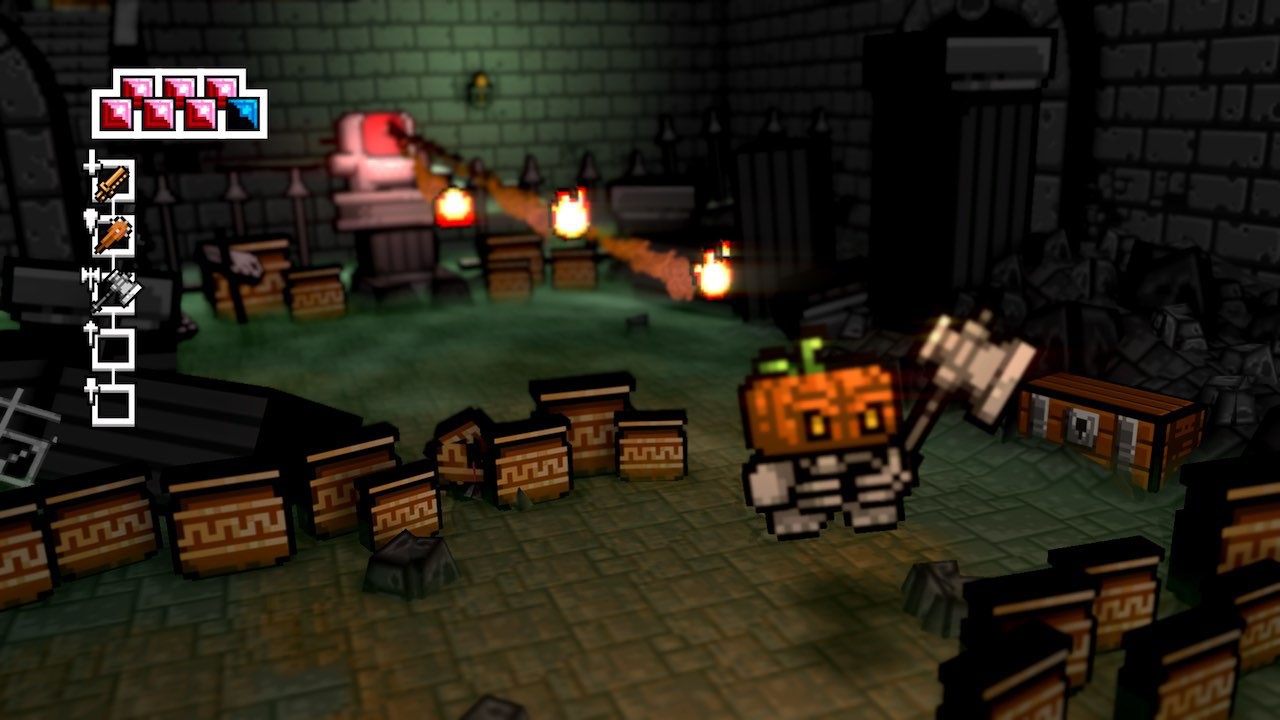 There is, unfortunately, no progression or levelling-up system in Skellboy, making lots of the body parts irrelevant,  as once you have found the best set of body parts, there is little incentive to explore or experiment aside from collecting every item to display in your ‘Savegrave’ crypt. This also means there is no reason to attack weaker enemies commonly found in the starting areas as they do not drop XP or money; making playthroughs become a crude speedrun focused on avoiding small, annoying conflicts.

The music in Skellboy is exactly what you’d expect to find in a game featuring a skeleton protagonist. Its upbeat and wacky tone sounds like a full-length album dedicated to Spooky Scary Skeletons, and even though this did become annoying after the first few hours of play, as you explore new areas with their own motifs, the music changes to match the tone of your location whilst still maintaining its core quirkiness.

With a pixelated, 16-bit world reminiscent of Octopath Traveller set in a colourful, 3D kingdom, Skellboy is graphically stunning. The team at Umaiki Games have followed a truly remarkable and unique art direction, unparalleled by most indie games I’ve played on the Nintendo Switch. The world is beautifully designed and seamlessly connected in a way that seems as if you never leave one area. The puzzles and challenges you need to solve are incredibly creative, never getting boring or feeling too similar in any section. Boss fights, especially those against Squaruman, utilise these unique environments well, offering substantial challenges that make up for the somewhat mundane combat against weaker enemies. 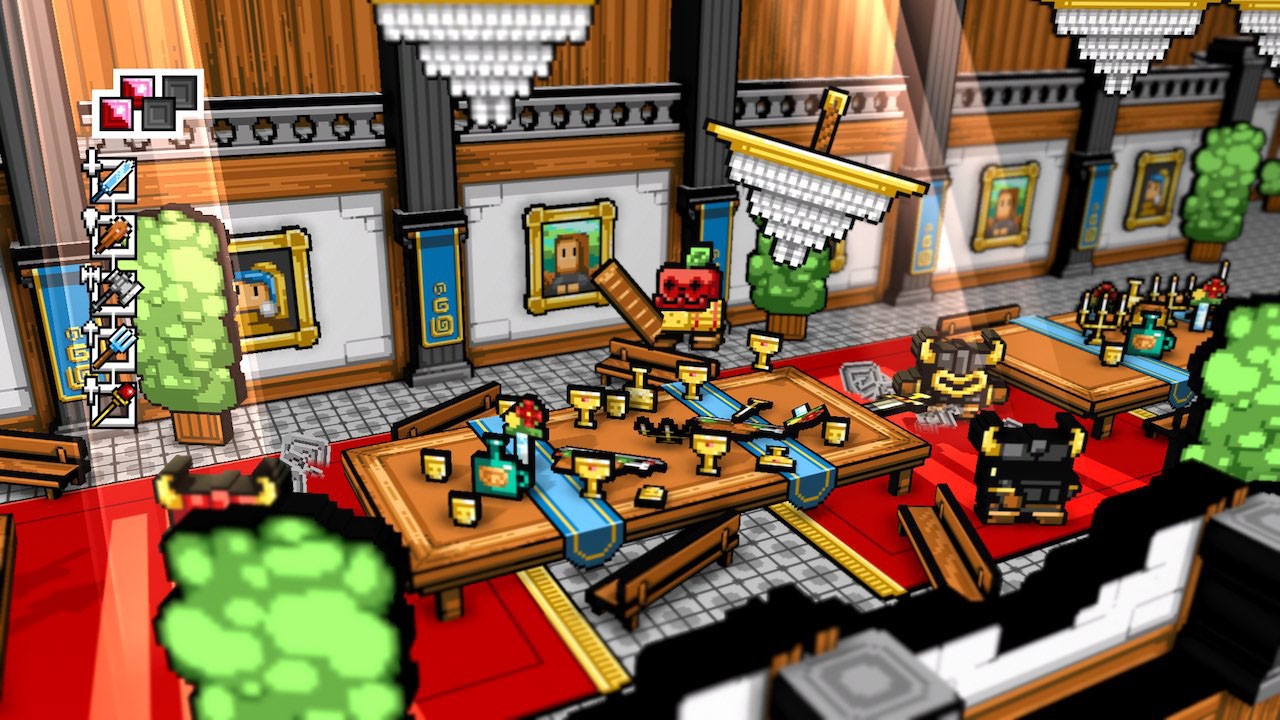 The interconnectedness of each area does come with its issues, however, as in some of the more detailed and busy locations, such as the Arena boss-fight or the Sewers, you will frequently experience lag and frame drops. Skellboy does not hold your hand during your playthrough, giving no quest markers or details outside of dialogue with NPCs. I would usually praise this design choice, but as there is no map to check, getting your bearings when coming back to the game from a lengthy break may prove to be difficult, especially prior to unlocking fast travel about halfway through the game, leaving you aimlessly wandering around hoping to run into the next task.

Overall, Skellboy is an impressive RPG full of wit, humour, and charm. Each area is full of individuality and offers interesting challenges to complete, whilst somehow feeling like part of an open-world adventure. The diversity of enemies and body parts keeps Skellboy feeling fresh as you traverse through its square-y goodness. In terms of replayability, I can see Skellboy becoming popular amongst the speedrunning crowd due to its relatively simple control scheme combined with testing boss fights and plenty of chances to experiment with pathways, character builds, and puzzle-solving. With a patch already scheduled to improve the aforementioned performance issues and implement bug fixes, I could see Skellboy becoming a must-have indie on the Nintendo Switch.

Challenging bosses, an excellent variety of customisation options, and visually stunning. Skellboy is a ‘humerus’ indie title that you won’t want to put down.