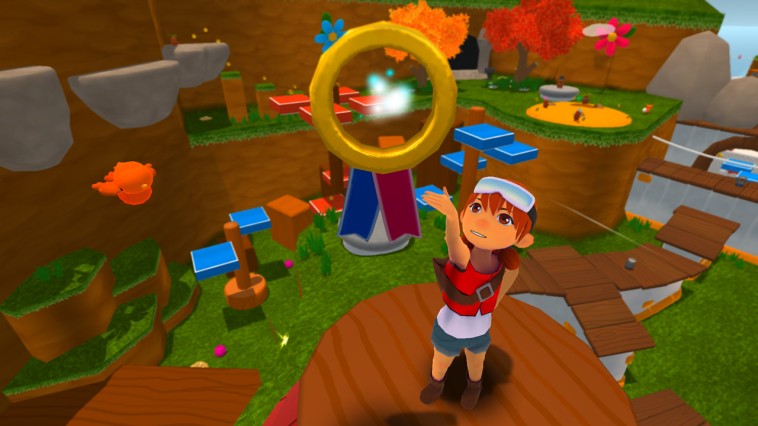 I straight up hated playing Poi on my computer. A bold way to start the review, but it’s the truth. The game never really played well on my older PC, my graphics card chugged with what I thought were fairly simple graphics, and the constant camera spin made me dizzy and I never felt like I got a grip on a damn thing. I have never been as filled with trepidation for a review as I have when I saw Poi: Explorer’s Edition come across my plate. So I’m really, really glad to report that the game, though still essentially the same experience, is a brand new encounter that grabbed my attention much more strongly.

Poi’s story is simple enough that it could be the plot for a children’s book. Two kids really want to be adventurers. One day, for no apparent reason, they run into an old man with an airship who also used to be an adventurer. He lost all of his Explorer Medallions due to a wicked storm, and it’s weird because the flashback makes it look like this happened decades ago and he’s only now doing something about it. Since you and your sibling are orphans or whatever, you immediately agree to jump on board and go looking for the Medallions in an effort to unlock something called the Misty Globe, which is a place to adventure or a treasure or something. Old Man Airship isn’t totally clear on that, but are you ever eager to set out on a quest you don’t understand. Armed with…a backpack and that’s all, you’re ready to go explore lands and islands full of coins, traps and monsters who all have exceptionally weak heads.

The first thing a player will notice is that Poi is Mario 64. Like, this game is as close to Mario 64 as you can get without actually putting a mustache on someone. I don’t say that in a bad way necessarily: a lot of games try to take this perspective and then inject a bunch of extra flair into it. Ginger, for example, was clearly inspired but added a lot of extra flair regarding hats and powers. Poi, for better or worse, has a very stripped down, simple approach to the 3D open platformer with collection and achievements. Even Mario had the ability to punch, and Poi decides not to engage on this level. Instead, everything, and I mean everything, is about collecting all those Medallions. Each level has several to unlock, and they must be done in the order they are revealed. Even if you’ve played through Poi a thousand times, you still need to get to the top of the windmill before you can go finding seeds, and some players will find that entirely frustrating. Like entering a programming class knowing Unix inside and out but still sitting through three hours of explanation as to what a keyboard is. Thankfully, Poi does a bit to soften the blow. 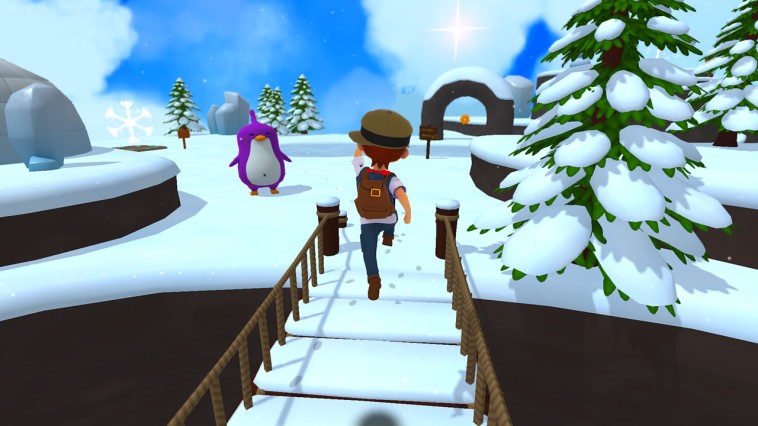 For one, Poi has been optimized to work on the Nintendo Switch, and it shows in a lot of ways. The Explorer Edition, besides having accessible art book, soundtrack and exclusive costumes, has been handcrafted to work with motion controls and HD rumble. Far from coming across as gimmicky, I felt that the motion controls worked especially well with the simplified landscapes and designs that Poi brings to the table. Having platforms and stages be spaced out just enough for most double jumps to meet creates a satisfying and rewarding landing every time, creating the illusion that my character (either a boy or a girl) is being put exactly at their limit and is working to the best of their abilities. The rumble that comes from bouncing off enemies or tightropes is a good, balanced vibration that shows what happens when developers take the time to invest into the HD. Having it just be full tilt rumble tends to make my hands numb in an unpleasant way, and that’s simply not the case here.

Additionally, Poi has a certain atmosphere about it that really carries the storyline forward in a upbeat and positive fashion. There isn’t an evil warlord or a dark presence on the horizon, just some kids and an old man flying through the skies, going to different levels of fantastic but inoffensive mystery, riding through the dark and the light but always coming out ahead. Getting hit too many times results in starting over, but it’s not a crushing defeat, and enemies tend to be generous with heart drops anyways. Early on, you get a parachute that lets you leap over the side of the airship and sail to other ships. Being a cynical person, I immediately tried to slam down into the cloud bank below, only to be caught by an errant gust of wind and pushed up to safety again and again. Poi doesn’t want you to have a bad time, even as a joke, because that’s not what it’s about.

Now, the game isn’t all perfect. Your field of vision is sometimes a bit wonky and obscured by the camera spinning into objects or otherwise just giving you poor depth perception as to where enemies are. When you’re playing in undocked mode, the blurry landscape makes me feel like the game is coasting on something primitive and lets me down just a bit in terms of presentation. And the quests that you unlock for time attack Medallions are simply too easy. After getting through the Bowser stage of Mario Odyssey, the Quake Run felt ridiculously simple and I only missed the top score by a second. Even the puzzles found in Ginger were a bit more challenging, but that could also be because my Switch was starting to chug at that point. Poi can’t really go toe-to-toe with the titans of design because that’s not where it is. It’s a simple game. You collect coins to buy stuff from the old man and unlock puzzles, but nothing you buy is a groundbreaking new move or anything. Heart container, sure, awesome. Magnet for more coins, brilliant. Telescope…yea, ok, I could get behind it. And unlocking new costumes and such are a nice touch, but hardly the same level of importance as certain other games that have come across the Switch recently. 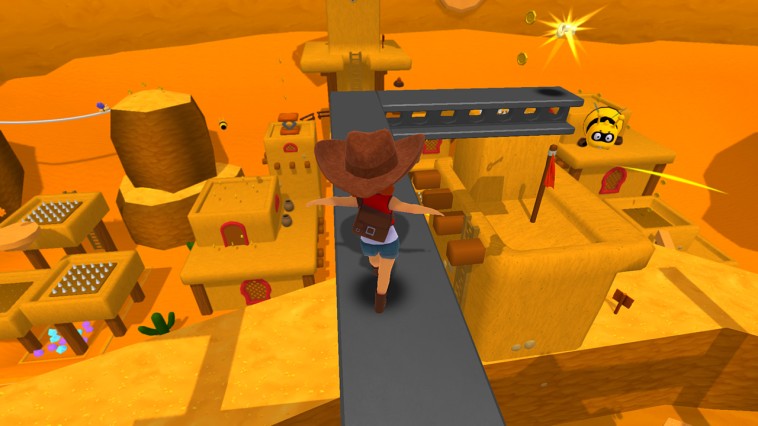 But it all boils down to one word and one word only: whimsy. Poi is absolutely full of whimsy and wonder and makes me feel like I’m playing a game back in my childhood all over again. Stripping away the lack of “serious” plot makes it so we can admire and revel in the lack of huge, important story hooks. We like adventure. This old man has adventure. Let’s get some adventure. It’s the collect-a-thon variant of dropping into an arcade game, but with a ton of polish and a significantly longer play through. And the soundtrack matches this idea perfectly, so I really like the ability to slowly unlock more of the songs to listen to whenever I’d like. I’m hoping that, eventually, the Switch allows you to play these things like Steam does so I can just rock out to the music of Poi, Odyssey and Oceanhorn on a playlist titled “Nothing is Wrong.”

Players coming down from Mario Odyssey will find a hundred and one things that Poi does differently that they don’t like, and I think that’s unfair. Poi actually has a lot of heart and work put into it to make a delightful experience on the Nintendo Switch, and I love that it’s finally ended up here. I think these sort of 3D platform adventures are designed by people who truly love Nintendo and want to pay homage in the best way they can: making their own game. Perhaps Poi could have had a bit more to it, but I think it was a solid and enjoyable game that did something very important: redeemed a previous encounter. If you can look at something twice and get a better feeling the second time, take that and ride it all the way into the sunset.