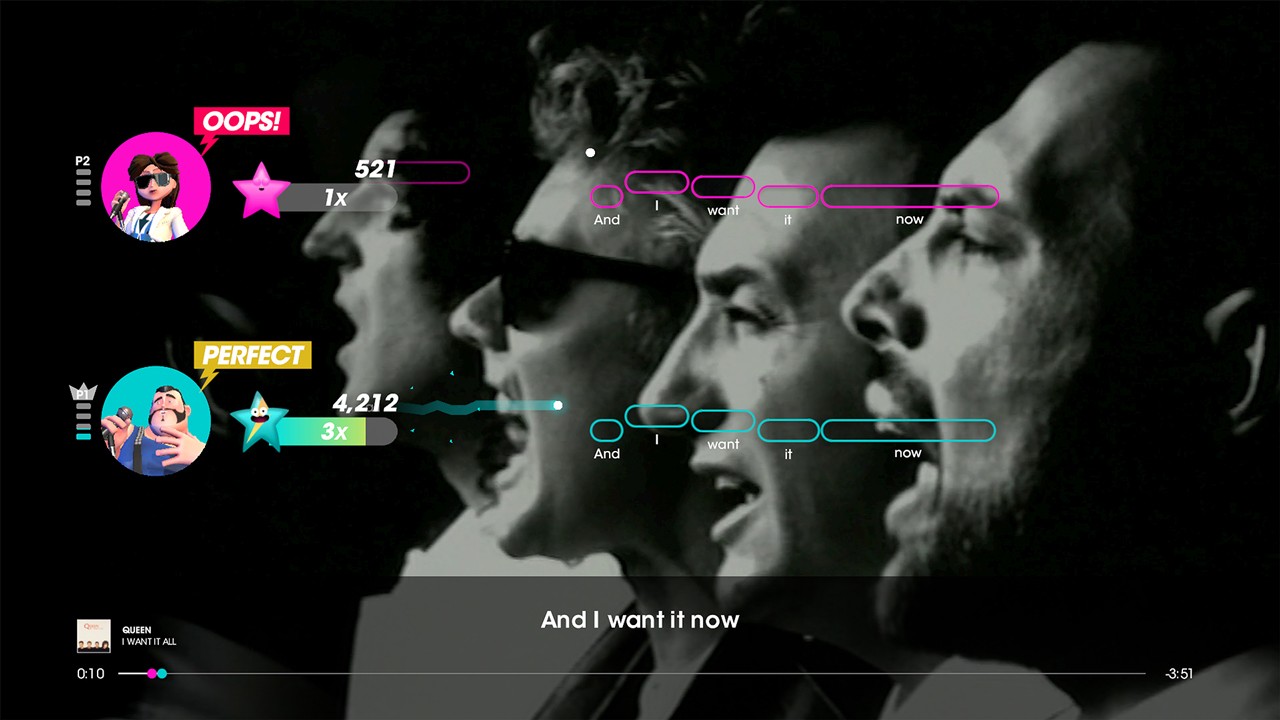 It’s insane to try to track the wavelength of Queen in the public consciousness. From the band’s initial start to Freddy Mercury’s heartbreaking death, the band went through a meteoric rise and fall, almost vanishing from the ears of the world before a comical return in the mid-90s. If not for Mike Myers and Dana Carvey, Queen may not have had a resurgence until much later, but Wayne’s World kept Bohemian Rhapsody on the tongues and frontal lobes of teens and twenty somethings across North America. The band has slowly regained traction and acclaim, culminating with Rami Malek’s incredible performance in the Queen biopic just last year (yeah, that was last year, time is frigging weird). Now, fans have a brand new way to appreciate and celebrate the collective works of Queen at home with the brand new Let’s Sing Queen, a karaoke collection for everyone wanting to Break Free at home.

For those unaware, Let’s Sing is the singing answer to games like Just Dance or Guitar Hero, only this one is focused entirely on singing, including matching pitches and harmonies to your best ability. In this version of the game, you have the classic version (pick whatever song you’d like), Harmony Mode (a duet version where you discover your pitch perfect choice with someone else), a Mixtape mode (get ready to sing five songs in a row), A Party Mode (two teams versus each other in a sing off of randomly selected games), online World Contest (sing and climb the charts against the globe) and the Jukebox where you can just listen to the music. This last part is particularly enjoyable because, more than likely, you bought Let’s Sing Queen because you presumably like the music of Queen and occasionally want to listen instead of singing. I get it: most of the time, I preferred to load up some tunes and just go Radio Gaga without needing to participate.

The biggest deal here is clearly the song catalogue, and Let’s Sing Queen brings thirty tracks to help boost and celebrate people’s love of Queen. All the tracks are unlocked from the start, so whether you want to go into the big radio hits of Another One Bites the Dust or some more of the lesser known, but still enjoyable hits like The Invisible Man, you don’t have to wait, do a bunch of ridiculous competitions to get the songs or pay extra. All the tracks are here, each carries their original album art to acknowledge the album whence they came. The songs all also have their original music videos, which was a frigging trip that I wasn’t expecting. The music video for Under Pressure is still something to behold, and players are welcome to watch and enjoy as well as sing along to the best of their abilities. I don’t know what it is, but I just can’t get to the pitch that Mercury hits within that song and needed my daughter to take care of it. Damn my vocal chords! 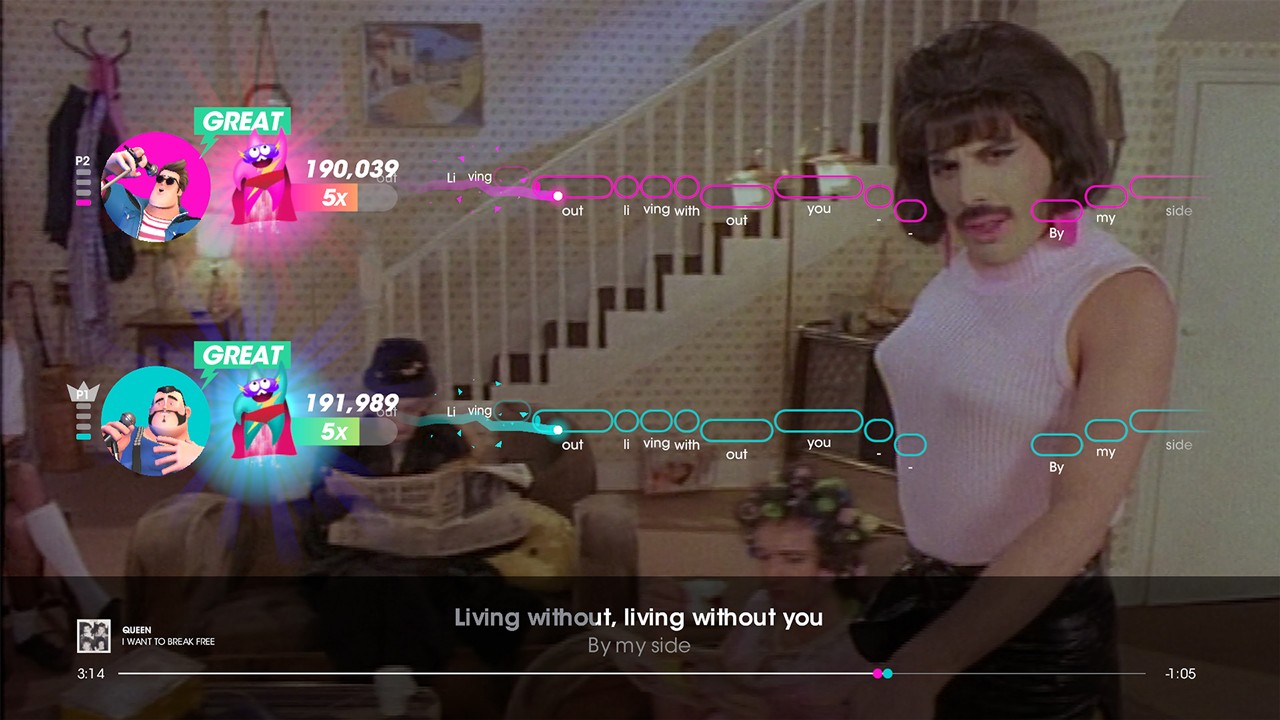 On the surface, there isn’t much to say here as long as you’ve ticked the necessary boxes. If you like Queen and you like singing, then Let’s Sing Queen should be straight over the plate. All the songs are in their original key, the sound quality is excellent, and it allows you to be graded in a points system to gamify what could otherwise just be you, at home, in the shower, doing nothing. The amplification of your voice through the Switch’s speakers gives you a more cringing idea of how far off you might be from the pitch of whatever song you’re singing, so just be aware of that if you’re self conscious about your own voice. The points system can be localized unless you specifically opt in to upload scores for the World Contest mode, so don’t worry about feeling inadequate against strangers: just worry about feeling inadequate against yourself.

However, there are some issues that need to be addressed, and some of them go beyond the bounds of the game as it sits in its current state and more to the fundamental issues of the Let’s Sing franchise in and of itself. That’s saying nothing of the same old problem: you don’t actually need to know the words. The technology just isn’t that sophisticated yet (or is too expensive to engineer properly), so you just need to be in the general range of the song in order to rack up points. Just for fun, I sang an original tune all about spaghetti and different sauces and it just happened to be to the tune of We Will Rock You. The result is that I won by a large point margin, not only because my pitch was mostly correct, but because my kids couldn’t stop laughing at my ridiculous freestyling. That’s a general issue, but not one that really needs to be addressed within this game. Hopefully Let’s Sing and Volxer Games can get this figured out eventually, because it’s such a foolish loophole for letting people not actually sing well.

As I mentioned up top, you have the Let’s Sing Queen Jukebox if you just want to listen to and watch the songs that you love, and that’s mostly true. The problem is that you NEED to sing each song at least once to add it to the Jukebox, and that bugged me a bit. I’m not a great singer, but I love music and have belted out a tune or two in my time. Having said that, singing all thirty songs by myself or with a friend just for the purpose of listening to them isn’t really my favourite thing to do, and I wish that you could just have the songs from the beginning. You’ve unlocked them all for playing, I’ve already paid for the game, just let me listen to Bicycle Race in peace without needing to sing it first. 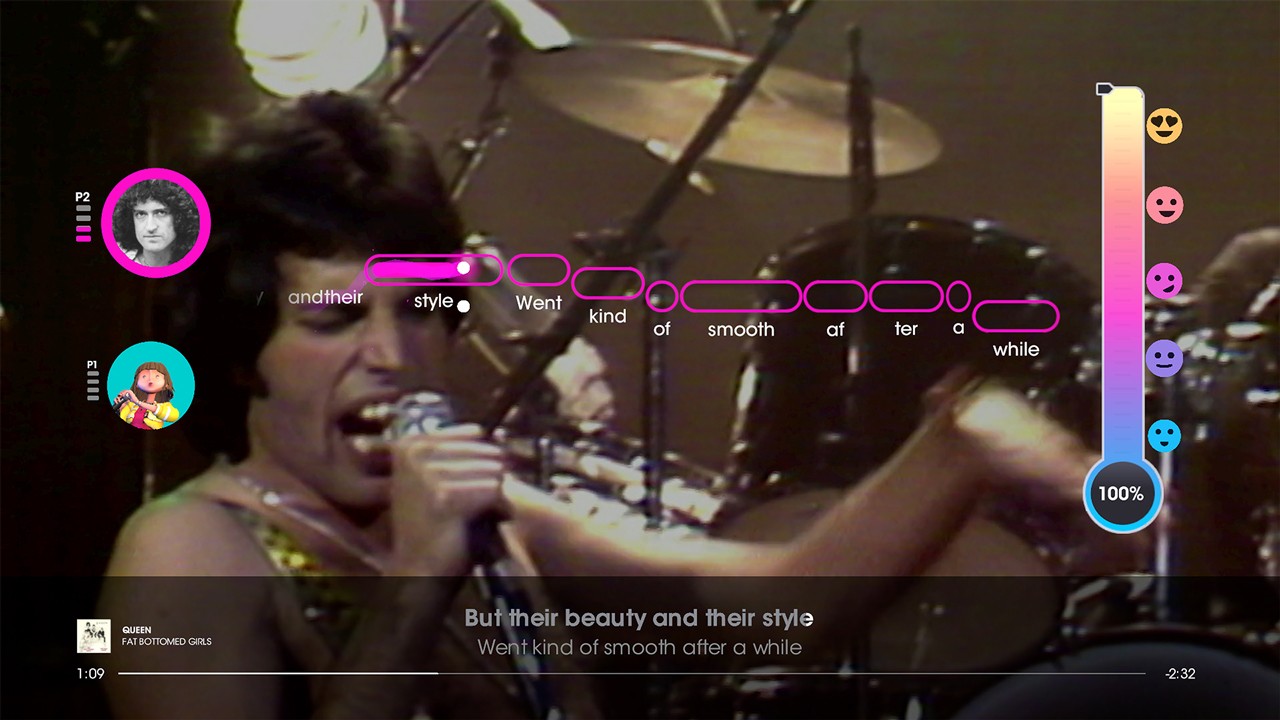 The biggest faux pas is the Let’s Sing app, and, from what I’ve read, anyone else with a Switch has experienced the same frustration and disappointment. I have a USB mic which is all fine and dandy for singing by myself. Let’s Sing Queen, though, specifically advertises using the smartphone app for including additional mics, and it makes sense: much like Jackbox, the realization that everyone has a smartphone and it’s easier to code an app than asking everyone to buy multiple mics is much more logical. Yet the app will not freaking work. Time after time I attempted to pair it with my Switch, my wife’s Switch, my Switch Lite, with two different NNIDs and FIVE different smart devices (all with microphones, totally different makers, two different operating systems). No dice. You even can select Let’s Sing Queen as a specific game, put in the four digit code, and it’ll just keep throwing errors at you from now until the end of time. So be sure to have a docked Switch and at least two mics at the ready, because otherwise you’re locked out.

If you can get over these issues, Let’s Sing Queen is a fine time with a great collection of songs that capture the style and majesty of Queen and their two decades of royal ruling. Though I wish the game had Heaven for Everyone, the inclusion of Princes of the Universe was enough for me to overlook the shortcoming, and the different game modes does have plenty of fun and silliness, though they are ultimately variations of the same concept. It’s a singing game, you’re not going to get Mario Party complexity here. Just make sure you practice before you tackle The Show Must Go On. Besides the lyrics, the game expects you to know all the filler sounds and “woahs” that Mercury drops between verses, and that definitely dragged down my score.

Filled with music videos, a “Greatest Hits” collection of songs and plenty of party games, only technical hurdles keep this game from truly being a Breakthru.