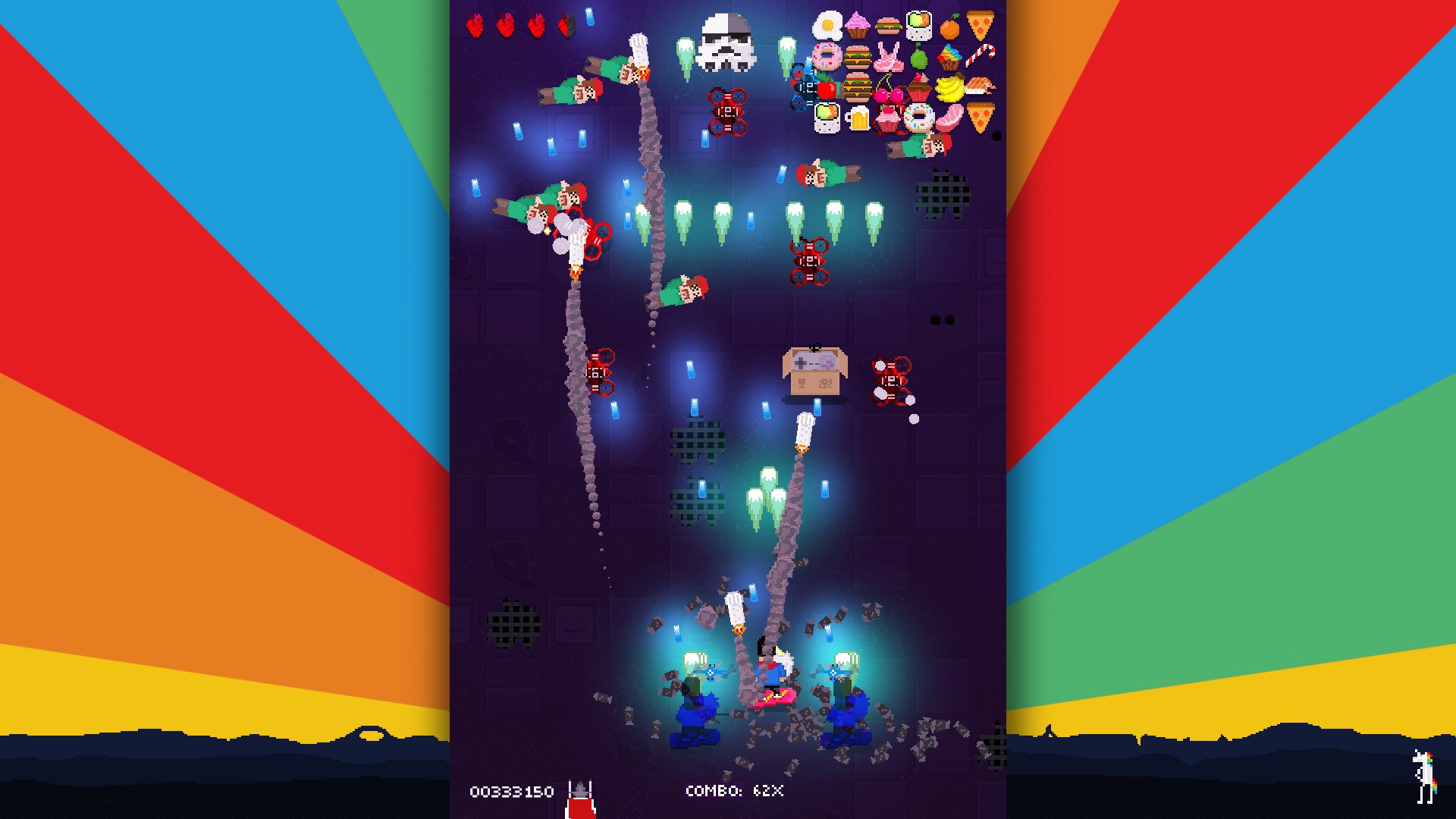 After several hours of playing Shooting Stars I’ve repeatedly killed Kanye West, Shia LaBeouf, Miley Cyrus and Gabe Newell amongst others (or people with very similar names who look just like them) using my trusty lazer cat. How amusing you find this premise will most likely define how much you enjoy this top-down shooter from developer Bloodirony that relies heavily on Internet humour.

I’m not entirely sure of the plot of Shooting Stars beyond the fact you play a hipster riding a hover board (a proper Back to the Future hover board rather than one of those mini-segways) who has to blast through a host enemies using a laser spitting cat. Not that it matters too much as the game is more intent on cramming in as many celebrities, Internet memes and catchphrases as possible during the short bursts of action. 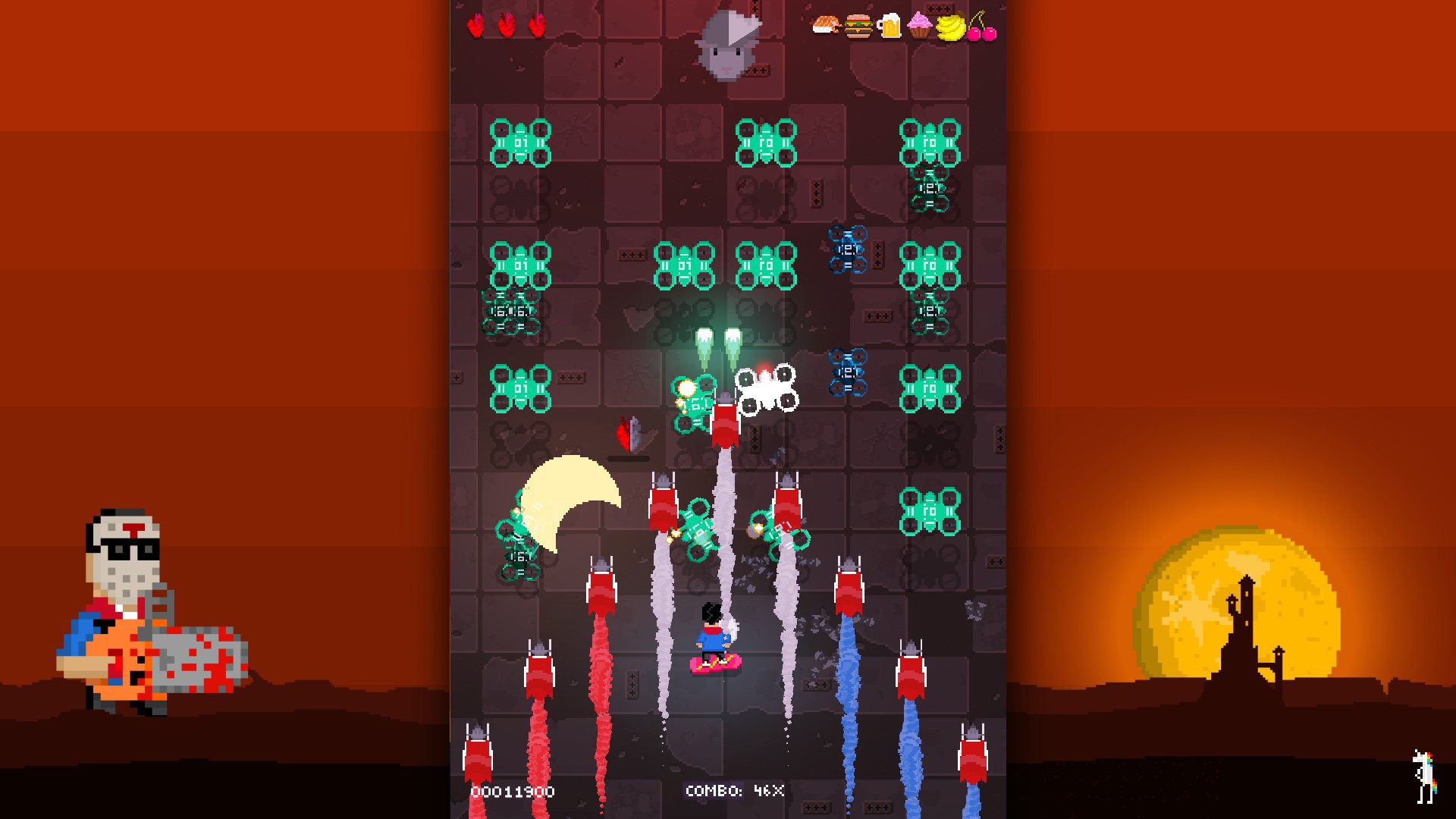 The gameplay itself is extremely simple with only directional controls and two buttons to worry about; the fire button (which you may as well hold down constantly as there is no ammo count) and an auxiliary super-weapon which recharges every 30 seconds. Each playthrough comprises a handful of procedurally-generated stages of forgettable enemies before you face off against one of many randomised celebrity bosses and then culminated in a battle against Chuck Norris (of course). It’s clearly designed for short bursts of uncomplicated activity and if you hadn’t guessed it was a port of a mobile game it should be obvious from the screenshots where you’ll notice the narrow field of vision.

Being a mobile game you might expect lower-quality visuals but in the case of Shooting Stars it’s a deliberate choice with pixelated graphics which actually look pretty good for the most part, even if they are just limited to static arenas with the screen only scrolling in between bouts of combat. Where they’re let down is with poor design decisions as the enemy projectiles are barely big enough to see and often get obscured by your own weapons, while having the wreckage of vanquished foes litter the screen makes things even worse. The icing on the cake however is the implementation of the super-weapons which look cool and impressive but usually do more harm than good as the screen shakes and flashes to the extent you can barely see anything.

It also doesn’t help that that the enemy units don’t really have any memorable personalitybeyond being flying drones or regular people (although one type does seem to a be Bojack Horseman inspired character). The mini-boss characters fare better as they’re big enough to look like their namesakes and more interesting to fight against. It’s also mildly amusing to read their celebrity-inspired ramblings and part of the reason for replaying is to encounter more of them. There is some inconsistency around what qualifies as an Internet celebrity though as several are just regular musicians like Skrillex, some are game developers while I still have no idea who others are.

The various super weapons are more memorable, mostly based on Internet memes, and there’s an appeal trying out as many as possible. Additionally you can pick up various items of junk food and collectible cards – although it’s not clear what the point of that is. That sums up Shooting Stars pretty well in fact – gameplay is fairly forgettable and not at all challenging and the only real reason to replay is to see more of the web-based jokes but even the appeal of this wears thin quickly.

I suppose some credit is due for the assortment of control options with keyboard, mouse or gamepad all compatible. However my small amount of goodwill here is lost as several of the Steam achievements failed to unlock when completed. In summary Shooting Stars might be worth a punt for you if you’re looking for a shooter that won’t frustrate and that can entertain you for 15 minutes… or if you really do find Internet humour that funny.