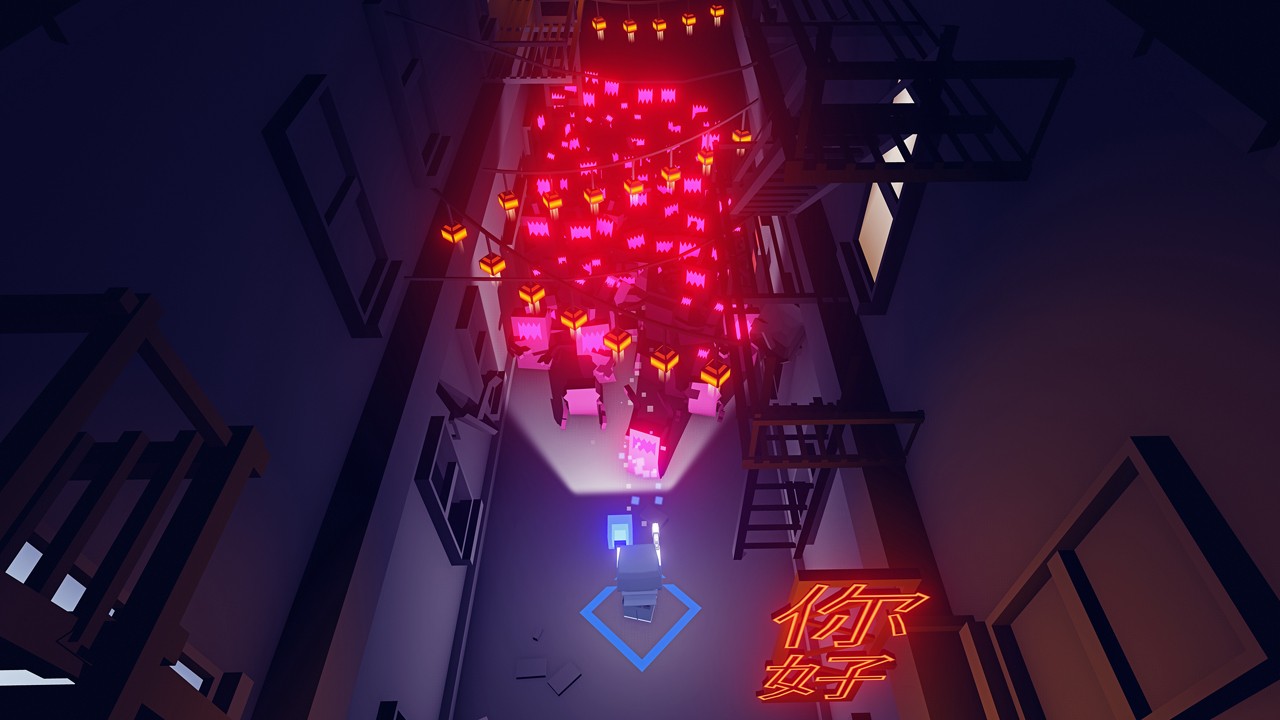 Since the 1950s, Hollywood pumped out a lot of B-movies that often featured outlandish alien invasions, but even better titles. Plan 9 From Outer Space, Them! and Forbidden Planet, to name a few. In the gaming world, we’ve had Escape From The Planet Of The Robot Monsters, Destroy All Humans! and now It Came From Space And Ate Our Brains.

Given a title such as this, it’s quite obvious what the underlying themes are (aliens), but It Came From Space And Ate Our Brains has zero story. There aren’t any plot devices, visual novel mechanics or even any cutscenes between levels. The game throws you into the action almost immediately, and it’s clear what you have to do: survive.

It Came From Space And Ate Our Brains is a twin-stick shooter following one of four characters blasting their way through numerous environments. These areas include rooftops, alleys, sewers and neon caves filled with their own line of extravagant crystals. While there is a good selection of levels, they’re all a bit similar to one another; following a series of paths that eventually lead to an end boss-type task.

It’s quite a linear experience as while there’s a lot of manoeuvring around the relatively large maps, there’s no backtracking or any optional paths – it’s A to B, collecting power-ups and shooting the aliens along the way. That’s fine as a concept, but It Came From Space And Ate Our Brains is quite repetitive and feels moderately sluggish in pace and through the movement of your character. 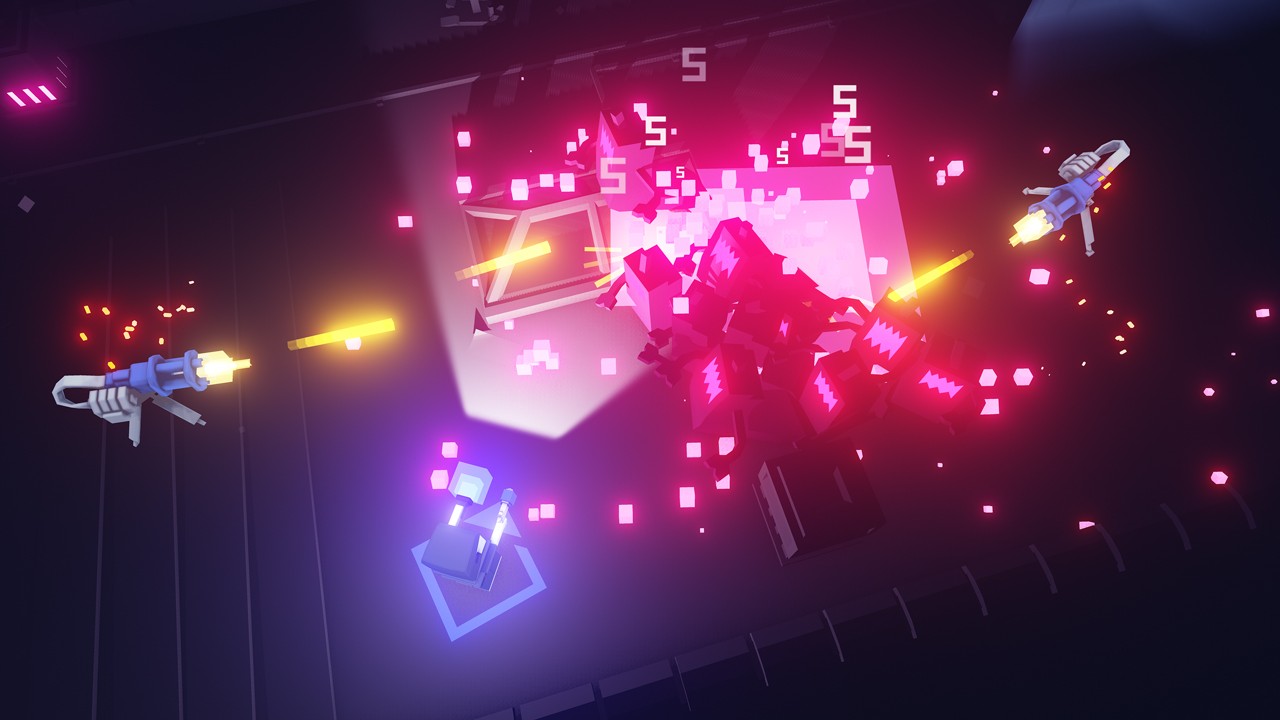 Take control of your character with the left stick, and with the right stick, you aim, with ZR as your fire button. It’s a conventional setup, but shooting doesn’t feel that accurate with most of the weapons and feels a little too precise. However, switch to a spread type weapon such as the shotgun and the game is much more enjoyable and playable.

There are a handful of weapons: the starting pistol, uzi, shotgun, plasma, laser and rocket launcher. As you can expect, each one has their advantages – the shotgun being the best weapon close up (and arguably the best in the game), the rocket launcher being slow but doing massive damage. There aren’t any health bars on the enemies you encounter (other than the boss), but there also isn’t any ammo – that is, it’s infinite.

Having infinite ammo is a rarity and quite a welcome addition, the caveat here being the power/range of the weapon. From the enemies you kill, or through the destruction of objects throughout each map, you’re awarded credits that can be used instantly to upgrade or unlock a weapon from the wheel, the L button. When you purchase a weapon, it will then give you an indication of how many credits are required until you can unlock the next upgrade. Bear in mind that if you die, you lose all upgrades, but can return to a checkpoint, or known safehouse.

In addition to your weapons, there are destructible objects throughout the game that contain credits, medikits and power-ups to help you in your mission. The power-ups are mostly fully upgraded versions of the available guns but is only temporary. Some of these power-ups also provide shields or beams of light that will sweep enemies nearby, which is quite useful when the waves get a little intense. 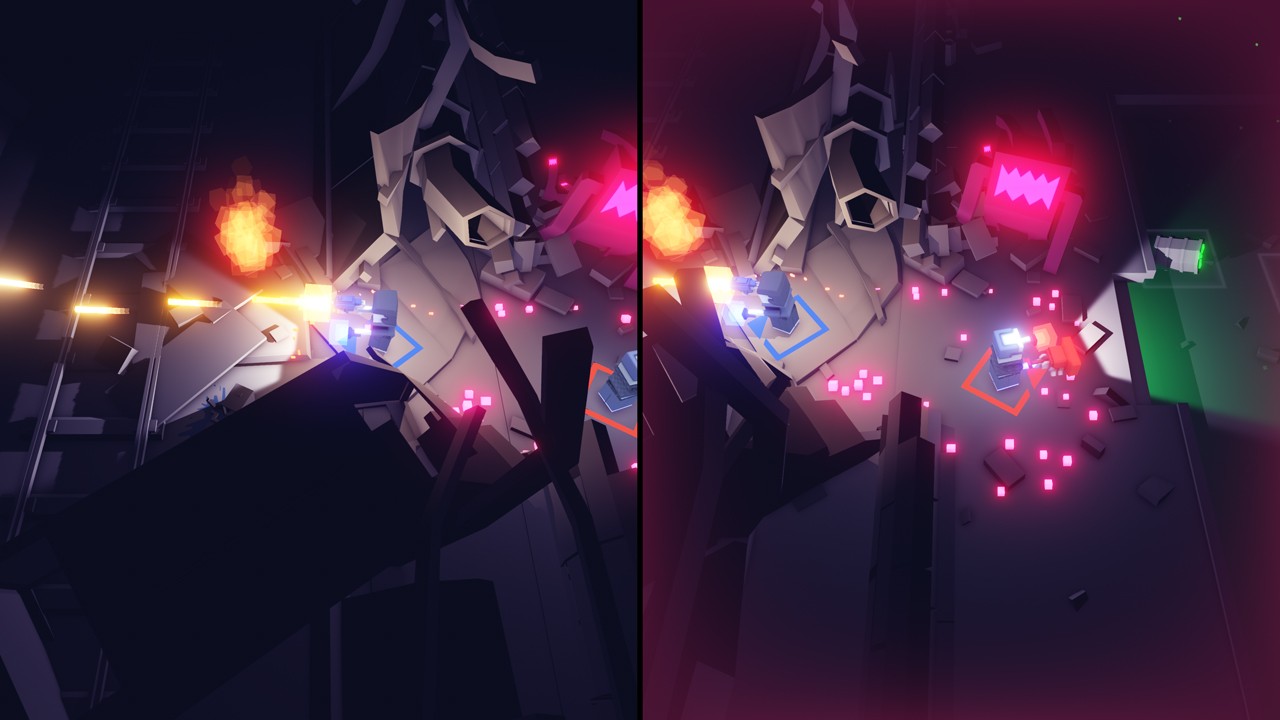 It Came From Space And Ate Our Brains can be played with four players, but I don’t know if that would add to the fun, as the game never felt much fun. Whether that’s because of the lack of story, the slight monotony of it all, or a mixture of both depends on your take on the genre. From my personal experience, these sort of games feel much more urgent, a race against time and some incentive to progress with the story. There’s no real urgency here, and there’s certainly no timer either.

Incentives lie in the hi-scores you achieve through your multipliers, minimal deaths, and so on, but it’s not enough to encourage repeat plays. When it comes to presentation, the art style is pretty cool. It’s like a Crossy Road effect but with excellent lighting where neon eyes identify all the aliens. Well, not all of them are lit up, and that adds to the challenge when there are large swarms. Enemies will continually respawn so there is room for grinding, but the main game feels a grind as it is, so whether you’ll grind to get an overpowered weapon is your prerogative.

Other than the main campaign of around six levels is the survival mode. The survival mode in It Came From Space And Ate Our Brains doesn’t need to be explained as it’s the same as any other, but it’s one of the few titles where I’ve completed levels. It’s quite easy in comparison to other titles, though I’ll admit I didn’t try the Insane difficulty. Again, the survival mode is repetitive, but that’s expected as you’re dealing with wave after wave. However, I did find that I played this the most as it allowed me to test out all the weapons to see what was my favourite. Like a Zweihander in most RPG games, the shotgun triumphs once more in It Came From Space And Ate Our Brains.

It came from space and ate our brains Review

One for die-hard twin-stick shooter fans who must devour every title, the game just felt a little too run-of-the-mill and lacking in energy. The visuals and lighting are excellent, and they do set up an atmosphere, but the lack of story and repetitive gameplay make this a little hard to recommend.