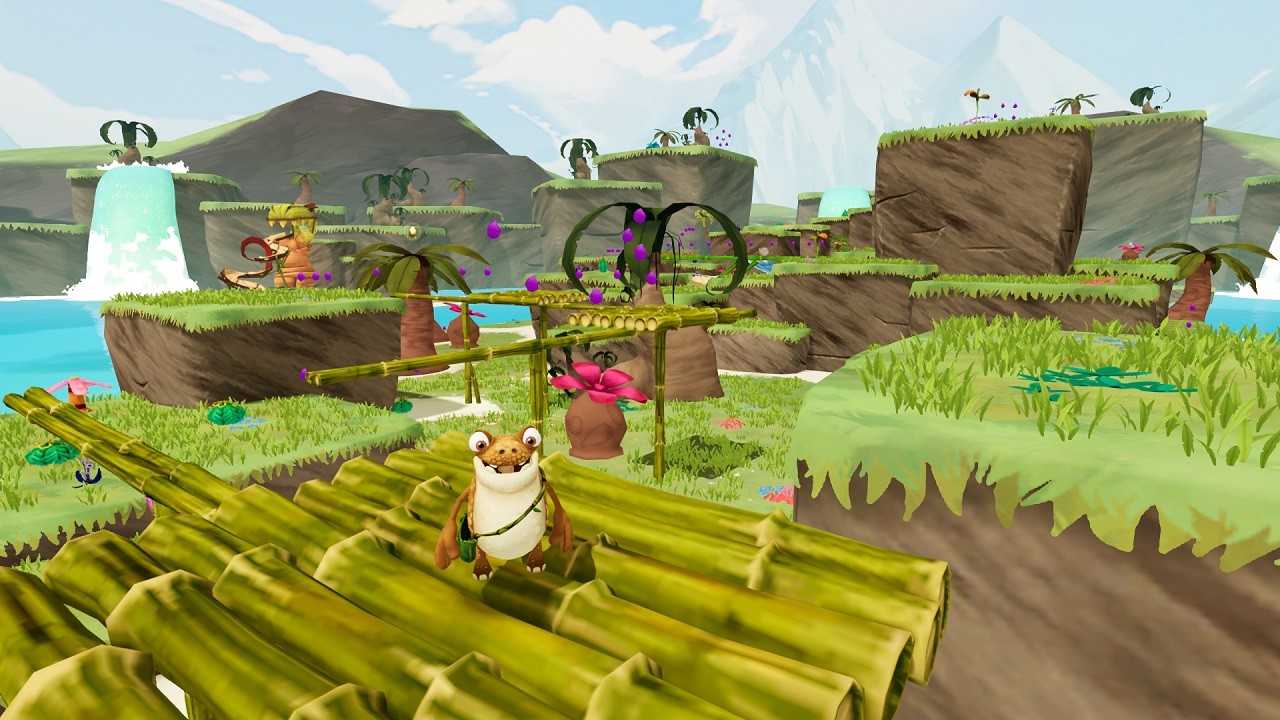 As a child, like many others, I always had a long fascination with the dinosaurs that used to roam the Earth. I guess it was always because I found it hard to imagine that such creatures used to actually exist. The whole premise of the dinosaurs, their fossilised bones and the mysteries behind their extinction always brings out the inquisitiveness in a child. It’s something that’s mimicked within Disney’s Dino-riffic carton series, Gigantosaurus. It follows the adventures of four young dinosaurs and their inquisitiveness of the world around them, something that is further investigated to good effect within Gigantosaurus: The Game as it stomps a release onto the Nintendo Switch.

Developed by Wildsphere and published through Outright Games, Gigantosaurus: The Game follows the themes of its cartoon origins. You play as either Rocky, Tony, Mazu and Bill, four young dinosaurs, as they explore the regions around them, collecting items and racing to new vistas in their overall quest to help their lands escape the threat of extinction. The game starts you off with the task of collecting a series of eggs that have been spread around the vista due to a meteor that has crashed into a towering volcano. With volcanic pressure building within, the whole land shakes violently, disrupting the everyday lives of our four friends and the whole of the dinosaur species that reside there.

As you progress through your exploration of the land, more quests become available; usually in the form of finding specific objects and using them to restore the land. It’s in this premise that the game presents a conservation message, as you collect seeds to plant new trees or gather up eggs to place them back into their nests. The game plays as a sort of open-world adventure, meaning that you can free-roam around the specific tundra that you find yourself in, but a series of invisible walls do limit the expanses that you are able to explore. However, this is very much a game that has been designed for younger audiences and in this respect, makes it a game that is fun to explore without the frustrations of ever getting lost. 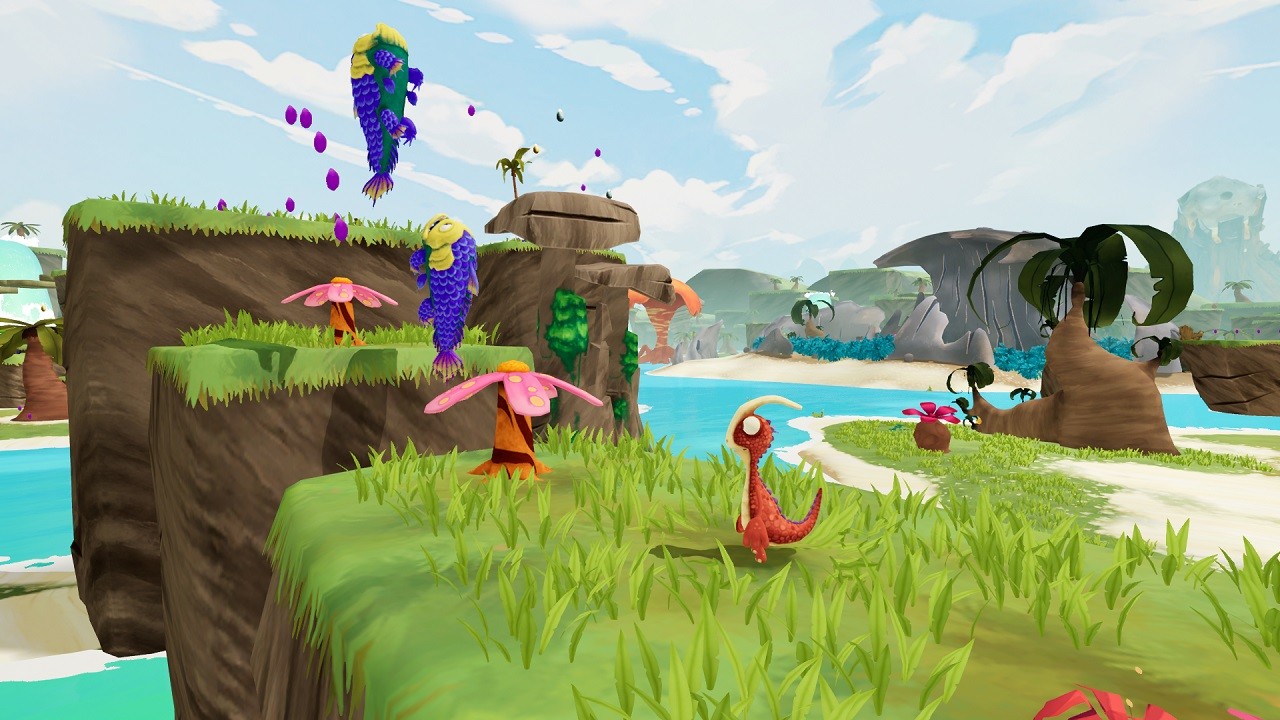 The game can be played in a couch co-op mode for up to four players, with each player taking control of a specific character. Each of the young dinos have their own specific abilities and feel to them, meaning that certain situations can only be resolved by that specific character. These can involve things such as activating lifts or knocking down tree trunks to create pathways. Even when playing solo, this is still easy to achieve, as flicking the shoulder buttons instantly selects between each of the dinos. Whatever your task at hand, a glowing trail always points you in the direction of what needs to be found, making exploration and traversal a simple objective for the younger players that this game is squarely aimed at.

Exploring the regions is great fun in itself. Although you do have some control over camera movements, it is limited in its scope. Instead the game sweeps around as you explore the region; often taking in sights such as Giganto stomping by and Pterodactyls swooping overhead to bring a real sense of prehistoric life to each of the levels. The larger dinosaurs that roam also play an interactive role within the game, as you help Giganto at certain periods of the game and he helps you too, as well as a host of other dinosaurs who make an appearance throughout the game. Although exploration is a large part of the game, it also plays on a number of other fronts to provide some variations in its gameplay.

In order to reach many of the game’s objectives, there is a great deal of 3D platforming that sees you bouncing off flowers, gliding with petals, jumping onto higher levels and sliding down them again. It’s all presented in a fashion that makes it fun for children to play; as well as us older kids. However, in order to reach the other vistas that await, from the jungle to the frozen plains, the four dino friends all take part in a race, offering a nice variation in play style. These sections of the game follow a similar premise to the usual kart-style racers that we all know and love; albeit, one that omits the need for any combat racing. 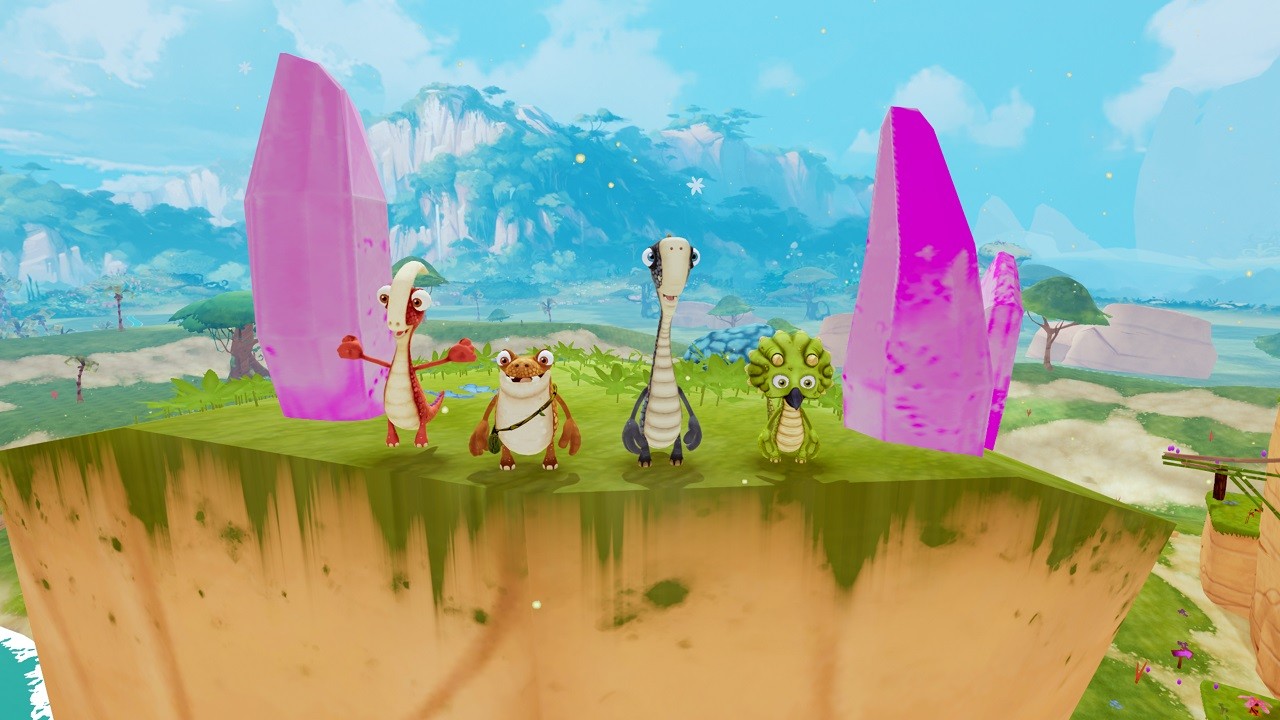 On a set track, the four dinos all race for position as they make their way from one area to the other. Along the way, a series of collectables can be picked up, as well as speed boosts. In terms of racing, again, this is a very simple premise that kids will easily get the hang off. In fact, it also holds a steering assist to some extent, making the racing a streamlined affair that offers a nice change of pace from collecting resources and exploring the landscapes. Within each of the areas to explore, you can pull out a world map that highlights each of the biomes, as well as places markers on certain objectives that need to be found, such as holes for planting trees or nuts that have been scattered around by the inquisitive Giganto.

Although collecting the various resources go towards fulfilling some of the game’s objectives, others can go towards the collection of 3D models that can viewed at anytime from the game’s menu. This all goes towards a simple premise of collecting certain artefacts that kids adore. In fact, this is a perfect title for children to play, with my eight-year old spending a huge amount of time exploring the regions and collecting items within the 3D world of prehistoric dinosaurs. It also tells a series of stories that runs along its main theme of saving the land from extinction. As you explore certain areas, cut-scenes come into play that provides a narration of unfolding events; all of which is told in a series of charming rhymes and gentle tones.

Overall, Gigantosaurus: The Game is a perfect title if you’re looking for something for your kids to play. It looks stunning with its cartoon-styled graphics and its gentle gameplay, soothing narration and friendly characters, creates a charm that is hard to resist. There’s always a helping hand to show you the way, whether its exploring, finding items or solving a puzzle, the game is always there, at hand, to nudge you in the right direction and help you discover everything that it has on offer. It’s in this mechanic, that it’s such a child-friendly game; especially if they love everything to do with dinosaurs. Honestly, they’ll lose hours in this game and I guarantee you, you won’t hear a peep out of them. Although fun for adults too, it may a little too simplistic to warrant a playthrough. However, as a game that can be played with your children, there’s not much else out there that can surpass the experience that this game provides. Simply Roar-some!

Join Rocky, Tiny, Mazu and Bill as they race and explore across the prehistoric world of Gigantosaurus: The Game.