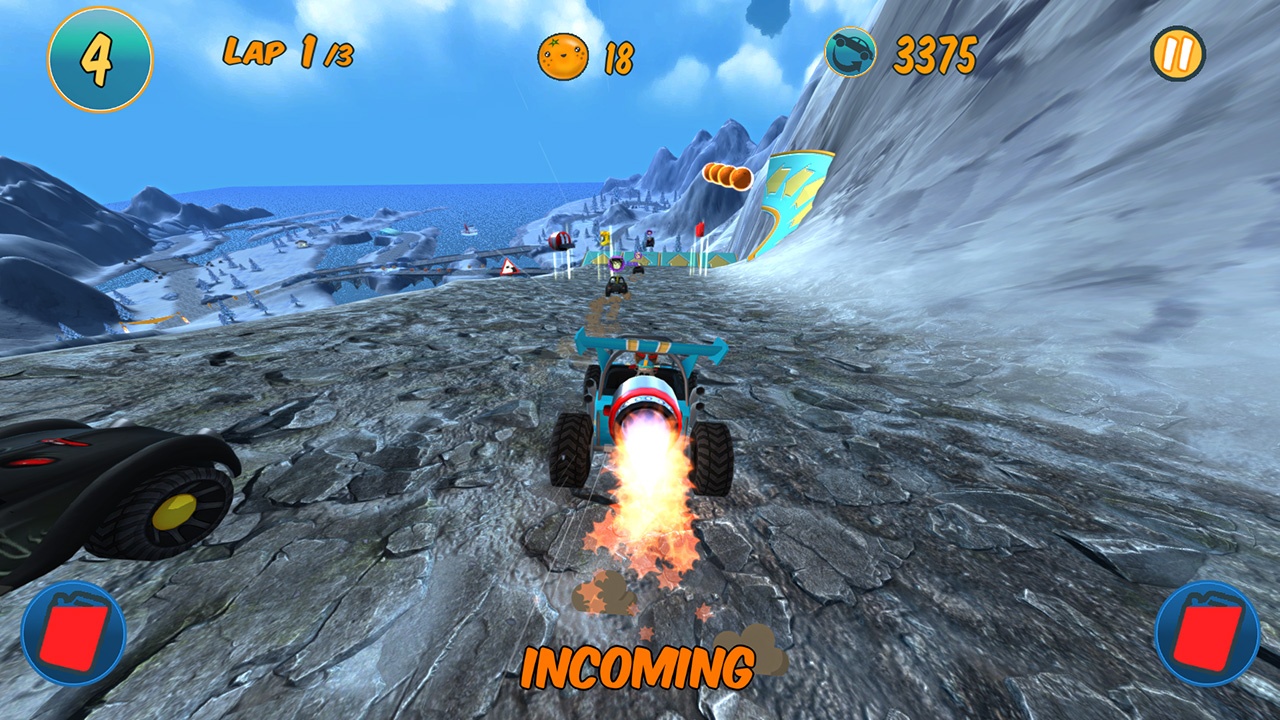 I always take my hat off to developers who try to improve on the formula that Mario Kart has easily made its own. It’s nice to have a touch of variation on its themes, or even a clone that can be played on systems that don’t support the Mario franchise, however, trying to emulate Mario Kart’s success on any of Nintendo’s consoles can be a very tall order indeed. Most attempts can fall by the kerbside or don’t even make it past the start line but every once in a while, a new contender battles for pole position and although it doesn’t quite topple Mario’s crown, it can easily take a place upon the podium. Rally Racers, a new game on the Nintendo Switch that’s developed and published by System 3 and West Coast Games, is one of the latest of such iterations to burn up the track, but is it good enough to cross the finish line and take first place?

After a brief introduction by the way of a tutorial race, you are presented with a map which stretches across several very distinct environments from tropical jungles, beaches, deserts and snow-capped plains. Each locale also contains a set of races, or challenges, that need to be completed in order to advance. However, this requires a lot more than just simply winning a race. There are several objectives that need to be satisfied in order to progress to the next race. The first of these is to achieve a set number of points that are awarded by performing stunts from a variety of ramps that litter each of the courses. These are a simple affair such as barrel-rolls and somersaults. The other objective involves you collecting fruit, again, with a set total you need to achieve. These further requirements in each race can add a touch of variety to the gameplay but, ultimately, all they do is detract from the racing formula itself. 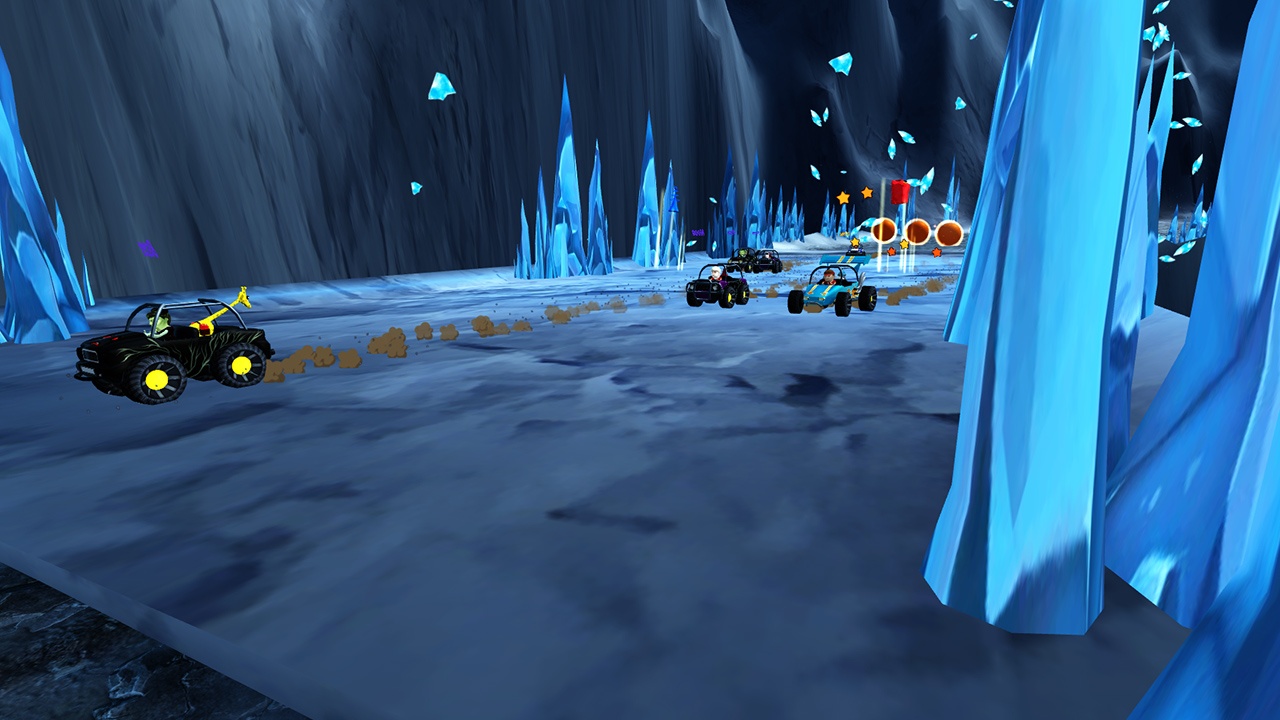 The racing follows in the same vein as many of the kart-style racers that are available today. Graphically, the courses contain enough variety in their surroundings and the tracks are usually easy enough to distinguish. It does lack a lot of the spit and polish that its biggest rival contains, but is adequate in what it sets out to achieve. It reminded me a lot of Crash Team Racing on the Playstation One in its aesthetics, but in terms of gameplay, it doesn’t even come anywhere close to its popular and successful mechanics. The other competitors can drive a good race, but with skilful driving don’t pose too much of a challenge as the real trials of winning a race come from the game’s mechanics and not from the other drivers at all.

There seems to be random elements that litter the courses which painfully hamper your ability to drive a smooth race. Sometimes, it was massive explosions that would send your kart flying into the air, however, the game would see this is as being off track and award you a time penalty as it places you back on the course as the other driver’s race past you. With no apparent signal of where these explosions will next occur, it just felt like an element of luck whether you successfully traversed these sections or not which, ultimately, felt quite frustrating. Another of these features came in the guise of mysterious purple clouds that appeared every now and then. I couldn’t tell if these were the result of another driver’s power up, as I was unable to achieve anything that looked remotely similar within any of the tokens that I picked up en-route. Anyway, just the slightest contact with any these shrouded purple pieces gained you a lack of any control with your car, with the same off-track rewards as the explosions which, again, deterred me from any sense of fun with its complete randomness. It’s almost as if the developer’s realised the game would be too easy on its own, so included these elements to make it harder to win each race.

If you do manage to finish within the top three placings, then the chances are that you may need to go back and fulfill the other criteria required to progress; namely the stunt points and fruit collections. It is possible to achieve all three in one single race, but again, with all these elements involved with each race, it just takes away the core fun that you would expect from a racing title. However, more often than not, you will need to go back and complete whatever objective you may have missed. If you have already achieved a racing position, then you don’t have to focus on the racing so much during these re-runs, however, with having to go back over the same old ground, sometimes up to three times each, it feels old very quickly and again, feels as if the developers have incorporated this feature in order to ‘pad-out’ the game a bit. 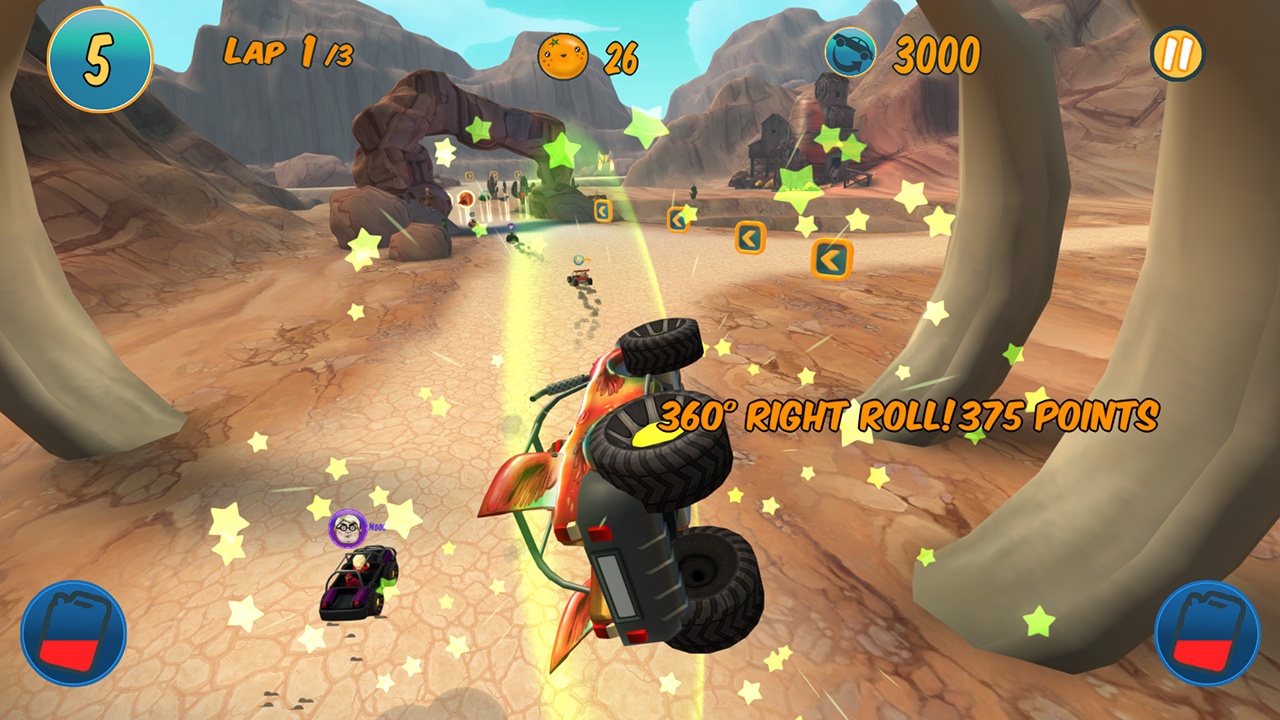 As with Mario Kart, each course is littered with power-ups that you can pick up. These include a variety of items such as shields, missiles, glue traps and ice rockets. They add a touch a variety but, ultimately, these items are pretty ineffective against the other racers and in altering the standings of the race. Along various points on the map, there are challenges that see you racing against your biggest rival, your evil brother Droog. Despite there some story of sorts behind the racing, this is largely an ineffective and pointless part of the game. However, these challenges do offer some variety to the racing and are actually more enjoyable than the core dynamics of the real racing. These levels involve you in chasing Droog against the clock as he drops a number of ghosts behind him. With each ghost you collect, you can add valuable seconds to your timer until you eventually catch up with your rival and beat him. Although quite fun and a nice change from the core mechanics of the game, these levels are too far and few and, ultimately, are over far too quickly.

There are a variety of different cars on offer that can be purchased and upgraded. However, I found that once I had started upgrading my basic car that you start with, these other models just became defunct and not worthy of my time. As well as upgrading the cars, you can also purchase animals to ride alongside you. These offer different attributes that can help you such as extended boosts or shields. You can also buy other racers so that they join your team and no longer attack you on the race track. Although these features add a bit of variety to the gameplay, they don’t really offer anything new or alter the style of the game in any way and seem to be more cosmetic than functional. All-in-all, unfortunately Rally Racers just doesn’t match up to its more successful brethren that have come before it. With its random elements, dated looks and ineffective weaponry, it’s simply another kart-racing clone that just doesn’t step up to the mark. Despite some variations in its gameplay, none of these extra elements are particularly well done or exciting in any way; making the game distinctly well below the average you would expect, especially with no multiplayer elements included whatsoever. Unfortunately, Rally Racers just ends up being a game that fails to get off from the start, let alone cross the finish line.