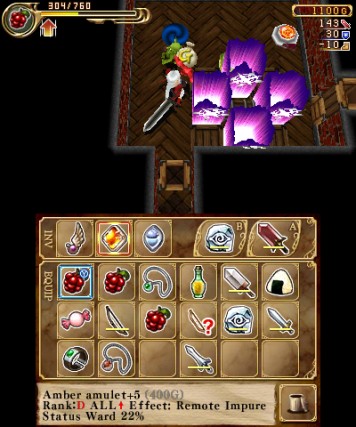 Bergsala-Lightweight want to make a great dungeon hack and slash game. Such is their determination to succeed that they are now releasing the third of Excave series of games within the space of roughly eighteen months in the hope that at least one of them will stick to you and not let go.

For the latest entry,  Bergsala-Lightweight have all but done away with the previous leanings towards an RPG lite and concentrated on an almost score attack structure. Gone too are the choice of protagonist and instead you have a girl by the name of Scarlet,  who is now able to wield any weapon that she finds and at the same time seems to also be able to get by without wearing very many clothes and have jiggly boobs. Which had me rolling my eyes more than anything else.

Progression is a simple affair, to climb the Tower, you make your way through a bog standard unimaginative dungeon, collecting weapons to use on the assembled menagerie of monsters and creatures sent to stop you. At the end of every section is a warp to the next section, and at the end of all the sections is a larger monster that you have to take care of in order to complete the level. Any loot you have left in your inventory goes towards your final score.  At any point you are free to flee the dungeon,  as losing all of your energy signals the end of your adventure. 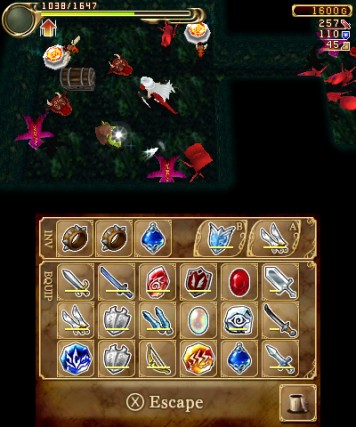 What is interesting about Excave is that your weapon of choice is based solely on what you find in the dungeon,  as you start off with nothing, relying on what you find as you go and your entire inventory is shown in the bottom screen. You’ll need to drag your sword to a slot to be able to use it,  the same with your shield or any support items. Potions and food can be consumed by selecting them and pressing Y which leads to occasional panic in higher populated areas later in the game.

Everything in your inventory has a set number of uses, even your main weapons have a level of durability that will run out after a number of hits on your enemies. It is good then that there isn’t a real difference in your progress solely based on weapon choice. It really comes down personal preference whether you lumber around with a slow swinging sword, or hit the packs using a set of twin blades in your arsenal, and weapon pick ups are so regular that you’ll be spoiled for choice.

You’ll be able to pick up magic skills to use on the crowds if needs be and balancing this with the status pickups will make for the occasional interesting moments. You’ll climb out of sticky situations wondering how you managed it with a well-aimed thunderbolt. It is a real shame that these moments are so few and far in between. 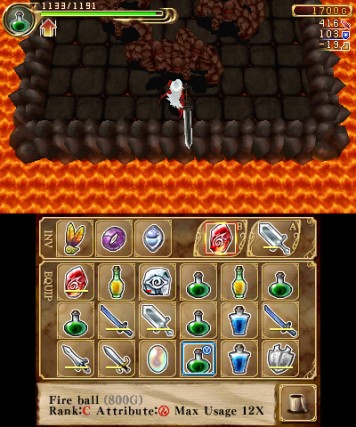 Excave 3’s main enemy is it’s lack of imagination. Even with the change in the dungeon environments and the occasional timed survival stages thrown in, you will start to feel weary of the same situations. Most of the time, standing in the room entrance and hitting swing until you clear the main group of enemies will be enough to clear a path to allow you to dash in and hit the spawn points.

The additional Fantasy mode allows to take the score attack online, and compete with other players in a league table. You also have the chance to unlock achievements as you go, which adds a bit of interest to the Fantasy mode but nothing to keep you playing on unless you are really committed to hitting the top of the score table.

Bergsala-Lightweight have ultimately delivered a very shallow experience in Excave 3, with graphics and gameplay that seems to ignore the current catalogue available on the 3DS. It is not a terrible experience in any way shape or form, but it is an experience that you will come to tire from a bit too quickly for the money you will pay. It is the ideal casual game if there were no other casual games on the market. There are too many titles more deserving of your hard-earned cash than Excave 3.