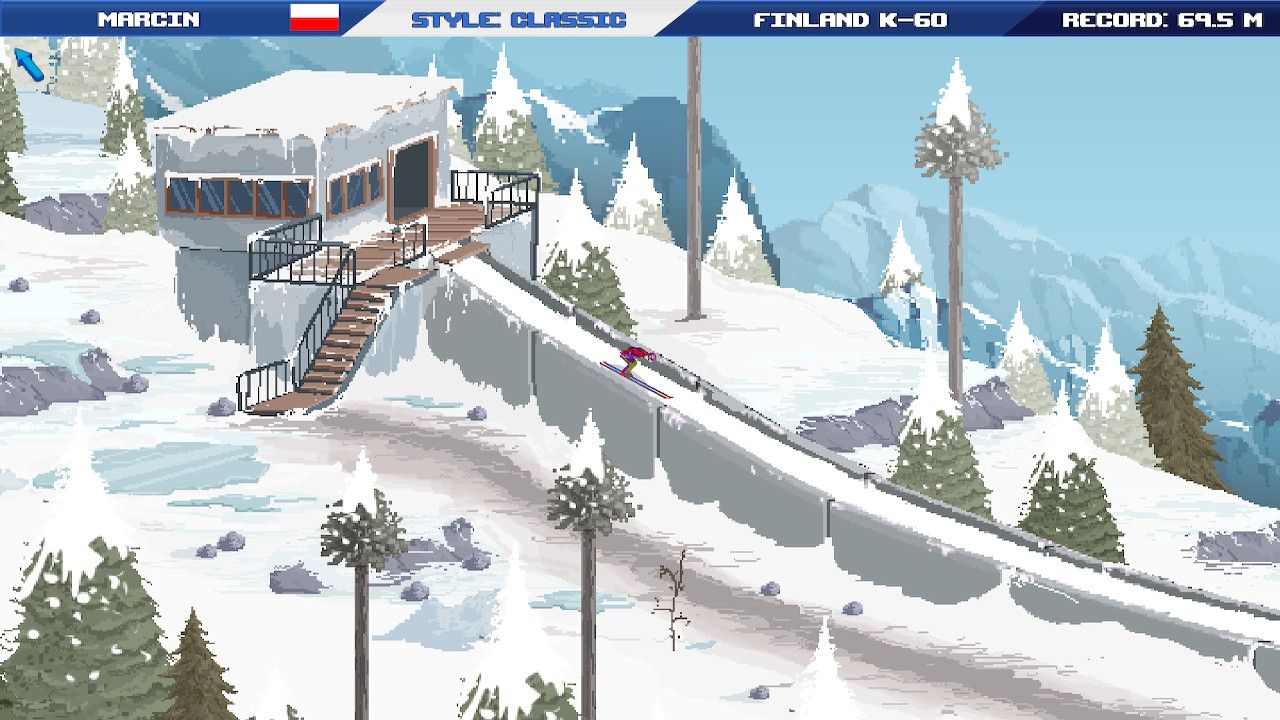 When it comes to Winter sports, one of my favourite disciplines has to be the thrill of the ski jump. Watching each of the competitors glide down the in-run with speed, before launching off the take-off table to soar through the air in a streamlined fashion and then, using all of their skill, to land a perfect descent has to one of the most exhilarating and scariest disciplines any athlete can undertake. Its competitive edge also provides an edge-of-your-seat viewing with its close-calling and the atmospheric ringing of bells, crowd cheers and starting signals that always creates an ambience of tension and excitement. Personally though, I don’t think it’s a sport that I would like to participate in, after all, I can barely walk up the end of the road when it’s been snowing, let alone slide down a ramp to launch myself into the air. However, I’ve got no problem with this in the digital world, as Ultimate Ski Jumping 2020 takes to the pistes and launches upon the Nintendo Switch.

As you may have already guessed by the title, Ultimate Ski Jumping 2020 presents a simulation of the sport it is named after. However, this is no serious simulation, but instead presents a pixel graphic and arcade style interpretation; one that follows a campaign, competition, customisation and online capability to soar through the air with a host of content. Whatever mode you play though, the general premise of the game involves qualifying and competing against a series of AI or human competitors through a series of varying, downward ramps to achieve the longest jump within each competition.

Beginning with the tutorial, the game gently eases you through the mechanics of performing such a jump. You have a choice of two control schemes, normal and realistic, which require either the A button to perform actions or the ZL and ZR buttons respectively. These cover launching your skier, jumping from the slopes and landing on contact with the ground. When in the air, you can also adjust the positioning of your skier with the left analogue stick to position yourself in a more streamlined position against the wind, which is represented by a directional arrow in the top-left corner of your screen. All in all, it’s a very simplistic control scheme and easy to get to grips with. The real challenge comes in finding those sweet spots that creates the most speed, propels yourself into the air, positions yourself in the best streamlined position and the point of contact to ensure a smooth landing. 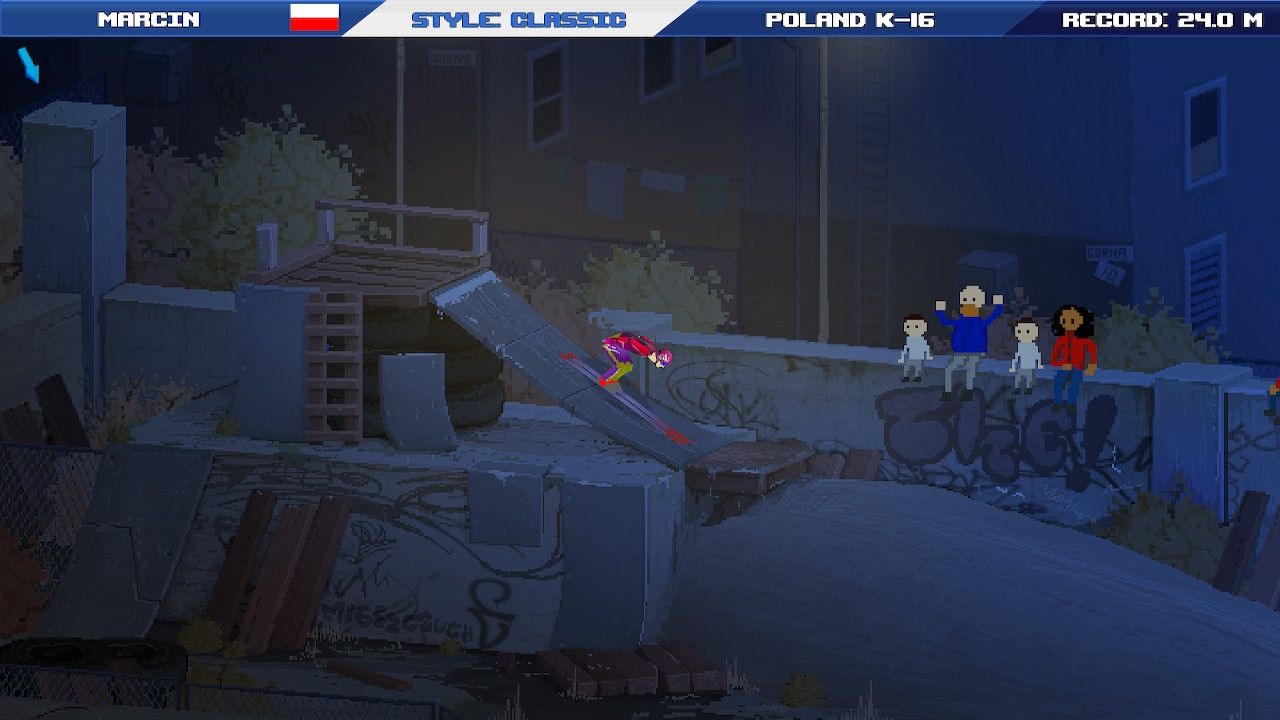 Once the fundamentals of control have been learnt, you then embark on a series of competitive game modes that takes you through a variety of levels, from the grass roots of grass skiing to the sands of the beach and the Olympic sized slopes, to even launching yourself upon the moon! In order to get a feel for each variation in level design and control scheme, it’s best to play through the campaign mode, which follows the exploits of up-and-coming Polish skier, Andrew Sturk. Charting his career, you play through a series of disciplines and locations, as you qualify and compete through a series of jumps. Each of the levels require you achieve a specific placing, for instance, top 30, top 10 or top 3 in order to advance to the next stage. Between jump or event, the narrative is pushed forward through a series of text presentations as the next level loads.

In general terms of gameplay, there’s nothing too demanding from progressing through each of the stages, although some levels possess normal and realistic controls, as well as an increasing challenge as you advance. Some levels also present a series of challenges to overcome or scenarios, such as feeling unwell or your competitors catching a bug. With a total of twelve levels, this is a campaign that can be, relatively breezed through within a couple of hours. With such a short campaign, the game also comes with a variety of other modes in order to sustain some form of longevity, with tournaments, solo matches, training runs and online competitions to compete in.

Each of these extra game modes can be fully personalised to cater for any style of play. These include the number of competitors, control schemes and what locations in which you wish to jump in. As well as these, you also have the options to create a customisation for your own characters, as well as purchasing items within a ski shop from the monetary awards you get from successful jumps. However, despite numerous attempts, I was unable to find anyone else online to compete against and the ability to purchase helmets, skis, gloves and so on, are merely for cosmetic purposes and offer no form of upgrading the abilities of your skier. In fact, with prolonged play, it soon became apparent that the actual complexities of this game are severely shallow and limited in the fun that it can offer. 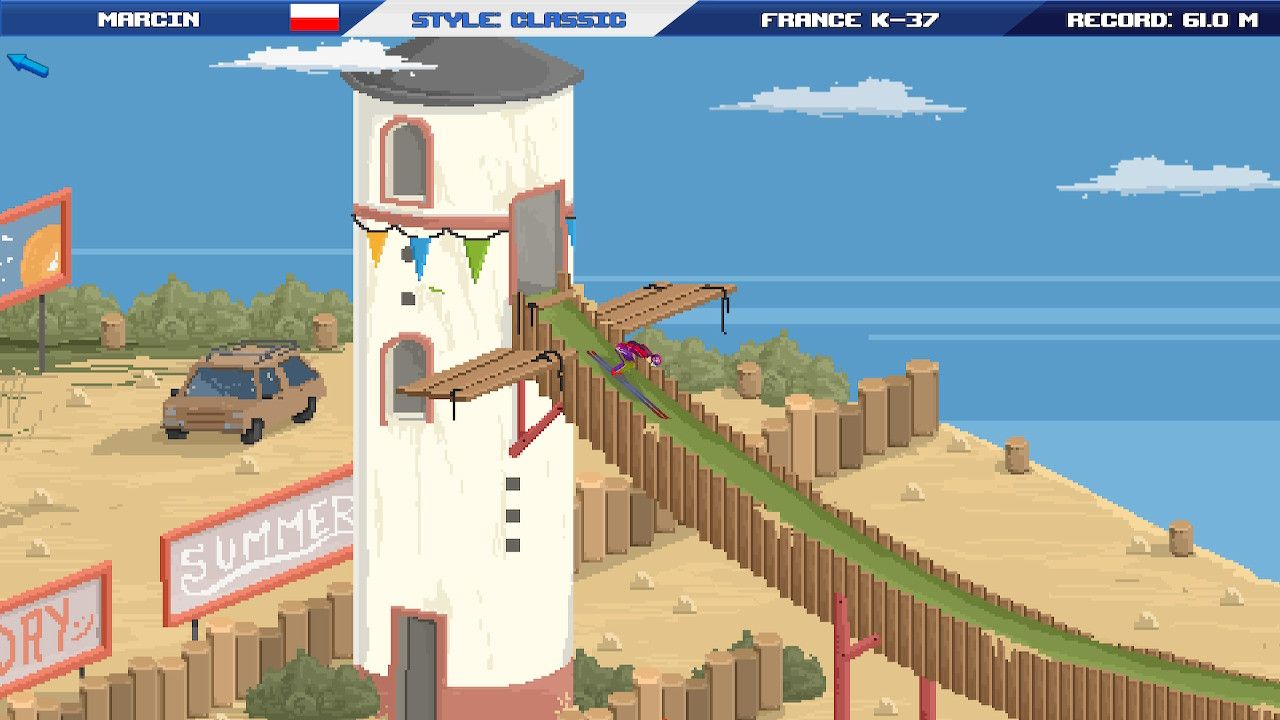 The actual elements of performing the jumps, and even the campaign to an extent, do offer some good bouts of fun. However, it doesn’t take too long for the formula to grow stale. With an empty online component and the limitations of only having so much fun in a solo capacity, the game becomes tiresome and with no option for upgrading anything, just becomes a chore that, ultimately, leads to nothing. It entertained for the first few hours, but after that, offered me nothing new. Sure, the online component could potentially be fun, but after five days of trying, I was unable to find one single player to compete against. Admittedly, this isn’t the developers fault, but is disappointing nonetheless.

This is further hampered by some technical and presentational issues that bring an overall aesthetic that feels severely below par. During my time with the game, I encountered stuck animations that forced my skier to land in the same pose he used for streamlining and button activations that failed to respond. The audio qualities of the game are also very hit-and-miss, with the crowds cheering poor jumps and record-breaking attempts being met with silence, disdain or the odd, solitary horn. In terms of audio, the game simply lacks any form of atmosphere or excitement. Other disappointments were also found in my country’s flag not being represented when creating my character, solo competitions containing just “AI Number 1” competitors and not being named, poor narrative interpretations and the ultimate game breaker of reaching a level of jump distances that can’t be beaten.

Overall, Ultimate Ski Jumping 2020 is a game that simply falls flat, instead of jumping to great heights. It can entertain for the first few hours, but soon reveals a very shallow level of options to warrant more invested returns. Once you’ve jumped all of its slopes, you’ve seen everything that it has to offer. Its campaign is interesting while it lasts, but its unpopulated online competition and lacklustre solo components eventually thaws what could have been a snow-laden ski fest. Even purchasing new equipment becomes defunct with no online competitors to show it off too, as well as everything on offer being simply cosmetic and offering nothing new to how the game plays. A number of broken and lazy mechanics also propel this game downhill faster than any Olympic skier; making this a game that is simply hard to recommend.

Ultimate Ski Jumping 2020 has the potential to jump to great heights, but in its current form, simply falls flat on its face.