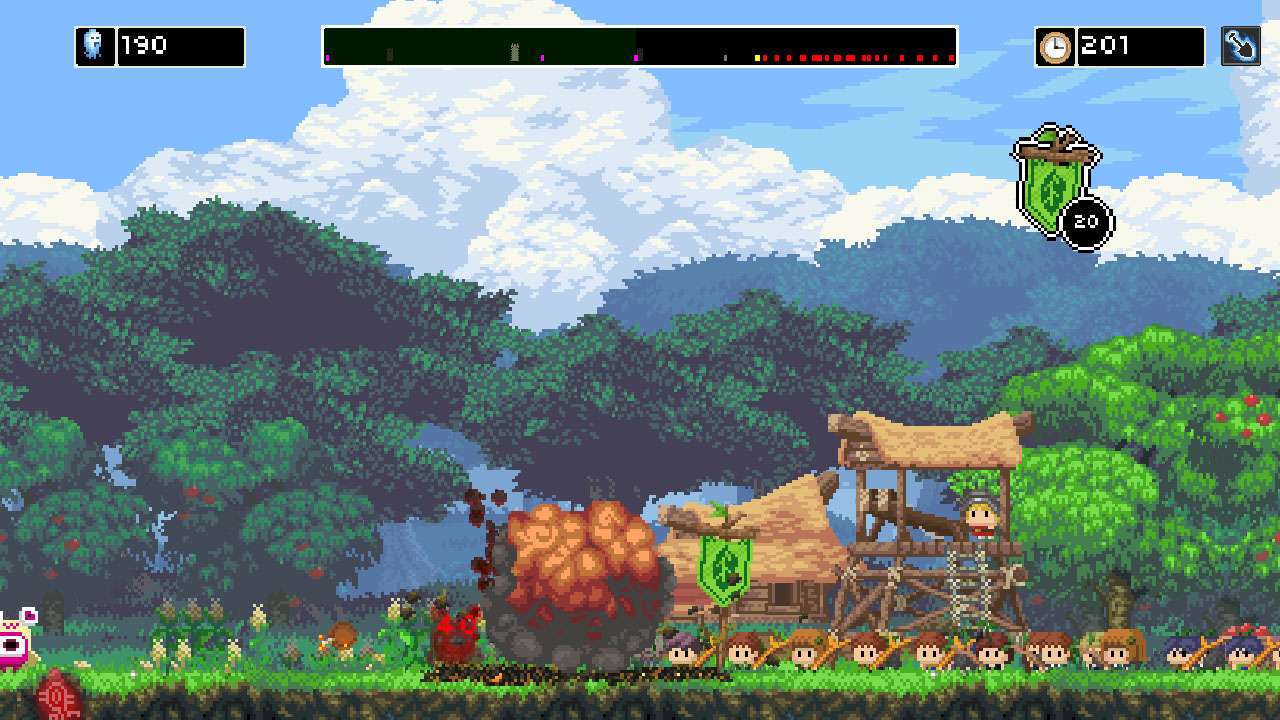 Tower defense games are one of those genres that really push me to one extreme or the other in terms of patience. On the one hand, things like Defender Chronicles, Creeps and, yes, Fieldrunners were games that I dumped countless hours into, and it’s easy to see why. They were mobile, they were engaging, and they perfectly made sense to touchscreen controls. On the other hand, when I look back that them, they were relatively passive as well, asking that I touch, upgrade, and wait. A lot of tower defense games nowadays remove that “passive” element and ask you to be more involved. Not sure if I enjoy that, but that’s definitely the crux that comes with Legend of Evil, a new title from Springloaded (who brought us Hiragana Pixel Party so very long ago).

The Legend of Evil is an age-old tale about the day that’ll come when the forces of darkness and the forces of light will finally come under their ultimate commander and decide, once and for all, to wage an all-out war to settle the score. Naturally, this is something that only happens once every ten thousand years, and, lucky you, it’s happening right now, in this very game. In only a slightly surprising move, you’re thrust into the mantle of the leader of the Evil forces, bent on world domination and destruction. I say only slightly surprising because playing as the bad guy isn’t necessarily the newest trope on the market, but it’s still uncommon enough to get a sufficient “huh” out of most. Anyways, with the powers of demons and monsters at your fingertips, it’s up to you to crush the advancing do-gooders, decimate their obelisk and consume the world in shadow once and for all! Or something like that.

Legend of Evil is a side scrolling, tower defense/offense game with one objective: destroy the obelisk. You will have various points on the land where you can build demon-summoning shrines, which then generate demons at a pre-set rate with a limit to the number of demons. Over the course of your campaign, you’ll be able to summon a greater variety of demons, including those that fly, those who have their own ranged attacks, and those that are just bestial. The shrines will also occasionally kick out “elite” demons at random, who look different, move faster and hit harder. You’ll also be able to upgrade the shrines, starting with something as simple as “summon demons faster” to “this shrine is also an assault tower.” 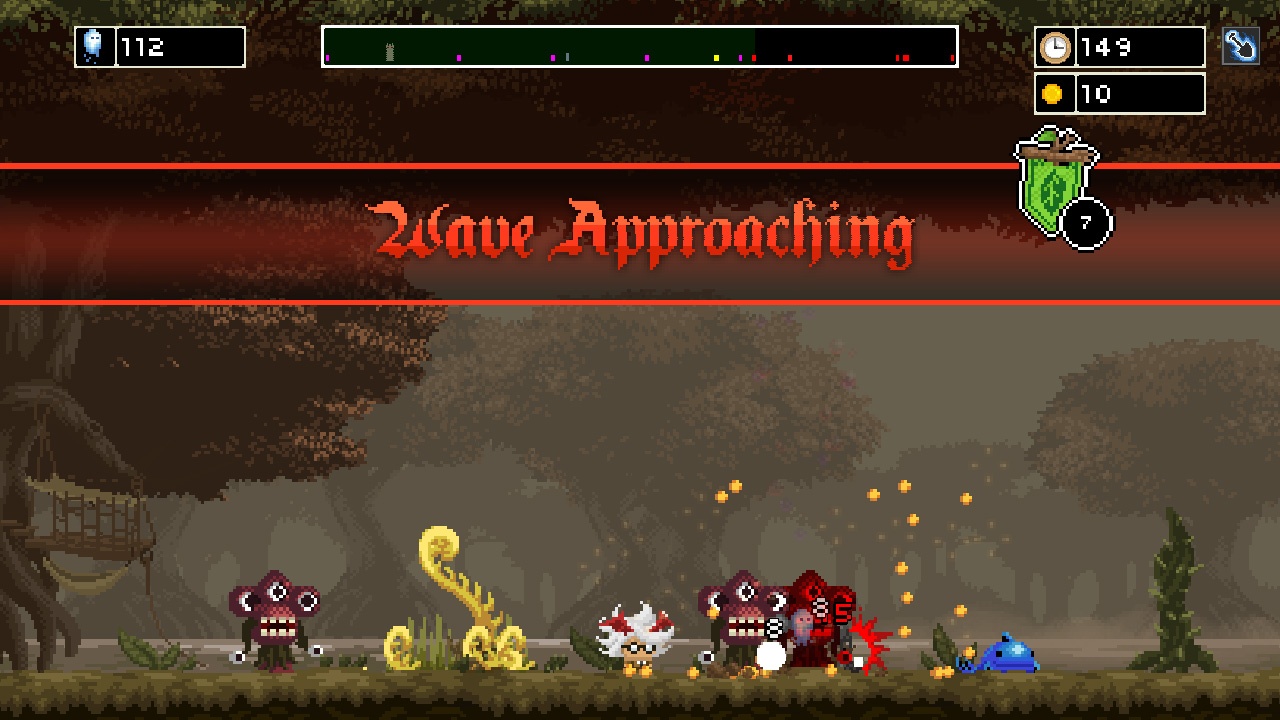 The humans, meanwhile, have plenty up their sleeves to keep them from being annihilated, and will attack you in various waves. They have their own elite soldiers, starting from peasants with pitchforks and ending up with massive paladins and the like, and they have towers all of their own that’ll screw you up. Defeating humans and crushing their battlements is the only way to generate souls, which is the currency used to upgrade the towers as you go. There’s also gold that you can dig up that’ll allow you to do some upgrades outside of the initial, passive upgrades that you get, but that’s a story for a different time.

At first glance, Legend of Evil is a decent little title. The pixel art and chiptune soundtrack are right on par with the quality that I’d expect, visually, from Springloaded, and there’s a fair amount of humor mixed in. The leader of the Evil side is a slightly deadpan observationalist, who’s rapport with the forces of Good is usually dry and slightly witty (without being too smarmy). He gives you plenty of descriptions as to what everything on the field is, sometimes offering valuable insight that might not be initially apparent. This is great, because everything has a strong variety to it, from the demons that you summon to the fields that you plunder all the way to each and every pleb that comes after you. It’s a bit surprising how much detail has gone into the game, even on a molecular level.

Additionally, there is a LOT of game inside Legend of Evil. Though the first couple of stages play quickly, each one also comes with five additional medals that can be gotten from completing the stage in a certain way. Deal enough damage, finish fast enough, dig up enough coins…for players who like to be completionists, this game asks you to get much, much better and then come back to do things the best way that you can later on. To give you perspective, the first three medals for the very first stage can usually be gotten by the time you unlock the second demon, but the fourth medal (finish with 140 or more left on the clock) requires quite a few more stages. You’ll eventually fine tune your demon machine enough to summon something big, fast and angry right out the gate, but, for a while, you gotta just let that sit and mock you from afar.

One thing I straight up did not care for was the difficulty curve of Legend of Evil and what it asked of the player from the beginning. After two rounds, the third stage is seriously much, much more difficult. You have to completely revamp your strategy overnight, figuring out at what time you need to raze one tower and replace it with a second, and also where on the field it needs to be so it can spawn and not get ignored by the humans. Since your demons can only walk forward, any humans that can get beyond a certain spot are totally unaffected. However, if you put your bruisers as close to your own obelisk as possible, they usually spawn slower and might be totally wasted before they get to the elite humans. If you’re old hat at doing this kind of time management tower defense, maybe it’s not so bad, but it’s a seriously steep change for people unaccustomed or even new to the game. 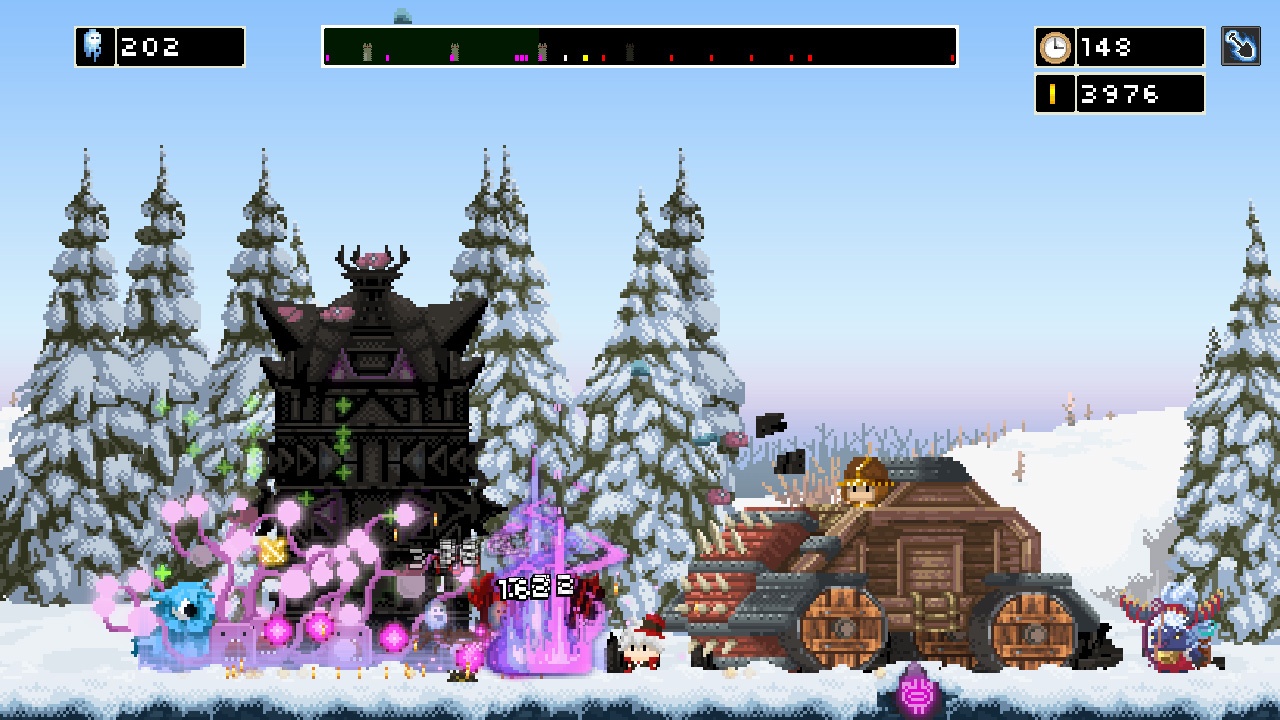 The game also does you no favors by, unfortunately, having the buttons labelled wrongly on the controller layout. I thought it was weird that the same button to unbind souls from certain humans was also to dig up gold, and I also found it weird I couldn’t dig up gold at all. It was only through trial and error that I figured out the digging button was bound to the R button, not Y as listed, which is WILDLY different. Additionally, there’s this really cool button to see the whole map (zoom map) which is misattributed to the button that lets you dash around the board. It’s utterly bizarre, and I don’t understand how this happened. If someone decided to, I don’t know, read the control setup as the game listed it and then attempted to play, they’d get crushed immediately.

The final nail for Legend of Evil is just the very styling of the game itself. It’s already incredibly difficult, and there is an easy mode, but it doesn’t make you feel good about needing to choose it. There’s basically a warning screen that tells you no great things will be unlocked on easy mode, and, if there’s a particularly difficult level and then you lose on easy, you just sort of feel like giving up entirely. When you have so many levels and so many potential demons, why on Earth would the game position itself in such a hazardous way? It’s such a shame, because there’s even a roguelike game mode where you do eight randomly generated levels and you use coins that you win (based on speed, damage, etc.) to purchase additional demons. The first time I played, I won the first round (plenty of coins, only a couple of demons lost, very cool). And then the second round I had ONE summon spot and the first human out the gate was this Genghis Khan-looking character with a massive sword who killed all my demons without question. I couldn’t even generate enough souls to upgrade my tower. It was a waste of time and a total shot in the heart for even making that mode remotely appealing.

I get that players like difficult games and things like Dark Souls, Cuphead and Salt & Sanctuary are all the rage. But those games balance their difficulty with great graphics, satisfying gameplay and a feeling of accomplishment for doing well and succeeding. Legend of Evil just feels like an adult playing basketball against a child. You’re the child. The game will have every advantage, and then the game “taking it easy” on you feels humiliating, and even feels worse if you still lose. This might be a splendid challenge for tower defense and time management enthusiasts, I don’t know. I’m neither of those, however, and this felt like a real shot in the stomach to try to fail on such a spectacular level. Players beware before picking up this one.

The Legend of Evil Review