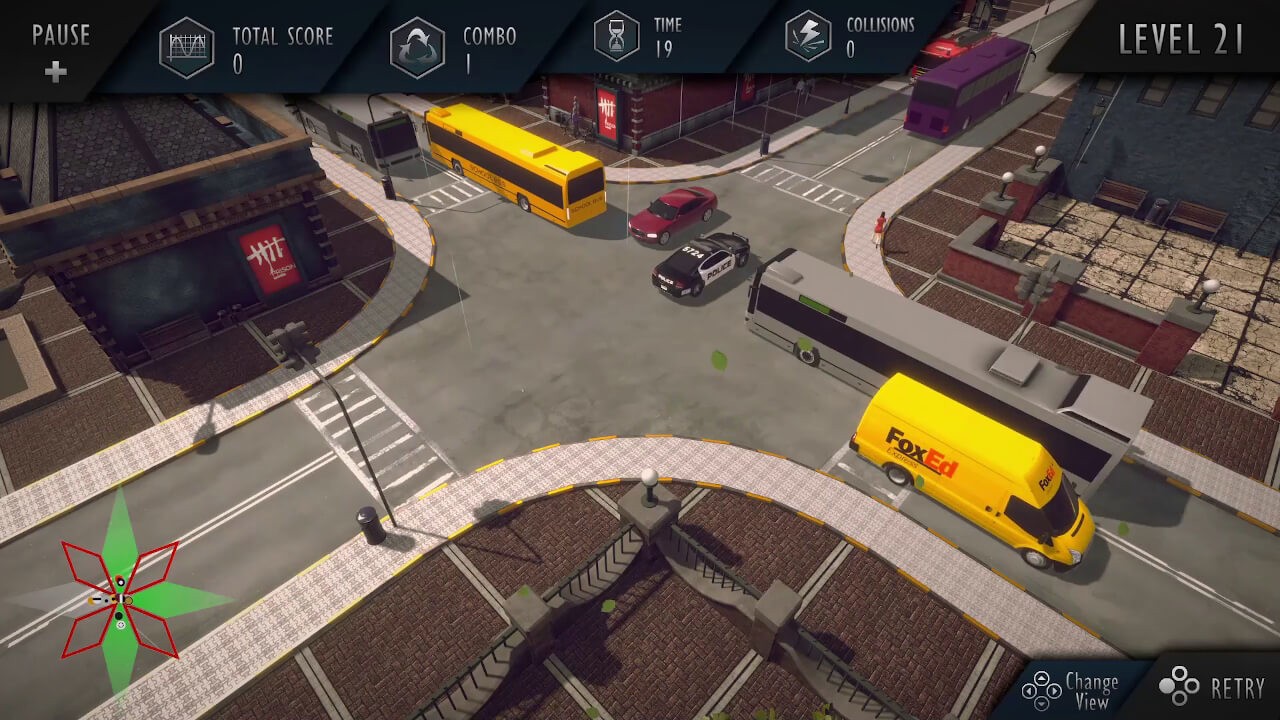 Those of us who are old enough to drive know that we have had to go through thorough training before we’ve been allowed behind the wheel by ourselves. We know also that the roads are defined by a clear set of rules and regulations. Unfortunately, not everyone understands them, or wants to abide by them, and this is a recipe for disaster! When people cannot adhere to them, accidents happen. This is the basic premise of my latest review title Perfect Traffic Simulator. It asks you to control the flow of traffic at a particular crossroads, you must observe the dangers, and plan to get each of the vehicles on their way safely.

Developed and published by Prison Games you start out with a simple problem to overcome. As the levels progress the complexity jumps, and you juggle many variables, desperately hoping that you succeed. The game premise is straightforward. You view the gaming area, get yourself familiar with the path of the cars, and adjust their starting position accordingly. Once you are comfortable with how you’ve set things up, you start the simulation and watch all hell break loose. Or at least that was my experience.

You are asked to complete 30 stages across 3 different zones. Each has a time limit, and a set number of vehicles. You are given; cars, lorries, coaches, trucks, emergency vehicles and more to manoeuvre safely. When you first start out you will be focused on the path of each of the automobiles, but this quickly has to shift to take in the surrounding environment. The developers have chucked in several traps and pitfalls that will instantly fail a level. People will walk onto the road, and across crossings, if you fail to time this properly, or don’t see them at all, failure is all but guaranteed as you mow them down.

When your plan comes together, and everything runs smoothly, it’s like poetry in motion. Unfortunately, 99% of the time victory is achieved through guesswork and minor tweaks. As you start the game, you are not introduced to the game mechanics with a simple tutorial, no, you must work out what is going on by yourself. I scrabbled around, confused with what was going on, and getting increasingly frustrated. I’d move a car back further, just to find that it would accelerate faster due to the long run-up. I’d move one closer, and it would be slower than a snail. The game claims to be a strategy puzzle style title, but for me, there was little to no strategy involved. I literally guessed my way to victory by starting the simulation, watching the mass pile up, then slowly moving cars back. 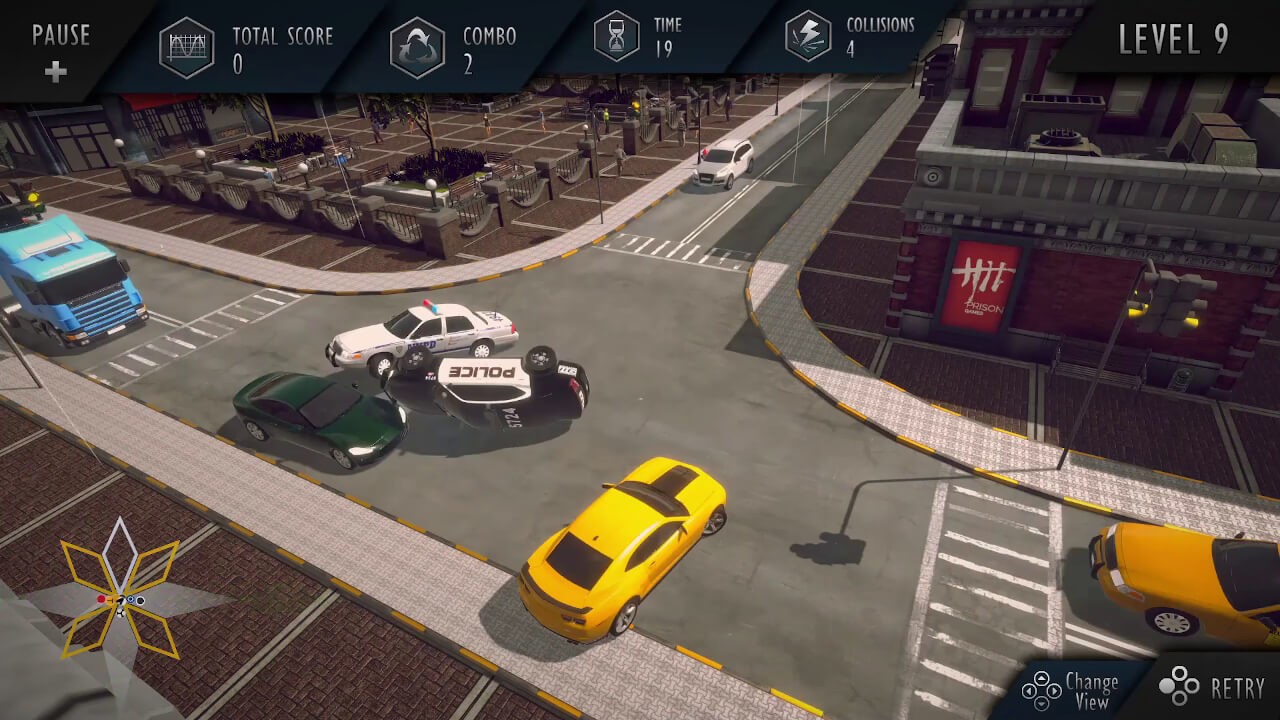 Having run through about 22 of the 30 levels to this point, I’m still unaware if the cars have their own defining attributes, or if they are all identical. I placed a coach at the furthest point on the road, only to find that it was quicker than a sports car. The pileup and mayhem was hilarious to watch. Fans of car crash YouTube videos will be in their element, though I’m not sure that is what Prison Games was striving to achieve.

With the increasing variables, and the difficulty of the levels rising on a gradual curve, you take on each new stage with a slightly different approach. The game asks you to aim for perfection on each level, which involves gaining a 3 combo for a perfect score. I gained this from nearly every level, but; I do not understand how I achieved it, or what defines a successful combo. It’s a total mystery, but even allowing my vehicles to bump and collide scored me the pinnacle 3 combo, so your guess is as good as mine.

When I first turned the game on, and witnessed its logo, my heart sank. It looked like something that I would have played on my Atari. Luckily, this old school look has been reserved only for the title screen. The action plays out in a 3D perspective, and the path for the group of vehicles is highlighted along the ground. You are shown the location of each of the hazards, and you can plan your approach from here. I was hindered quite a lot as I could not get a free movement camera, or an overhead view. Both options would have enhanced both the visual aspect and gameplay. Without them it’s not as user friendly as it can be, and sometimes your only way to view everything is to move a car all the way to the front, or the back of each road. The graphics themselves aren’t bad, they are colourful and crisp, but they won’t blow you away. The landscape for each zone becomes repetitive, and most of the time I ended up ignoring it completely.

The audio was also lacklustre. The developers chose a jazzy soundtrack to accompany all the action. It wasn’t unpleasant, but it was odd, and wasn’t at all what I expected to experience when playing this genre of game. It felt like I was controlling cars from a mid to upper hotel lobby. The cars crash in some spectacular ways, but yet no sound effects support what you see on the screen. It was all disjointed and felt like it was thrown into the game at the last minute. Neither the graphics nor the audio is bad, but, they are also not that good either. 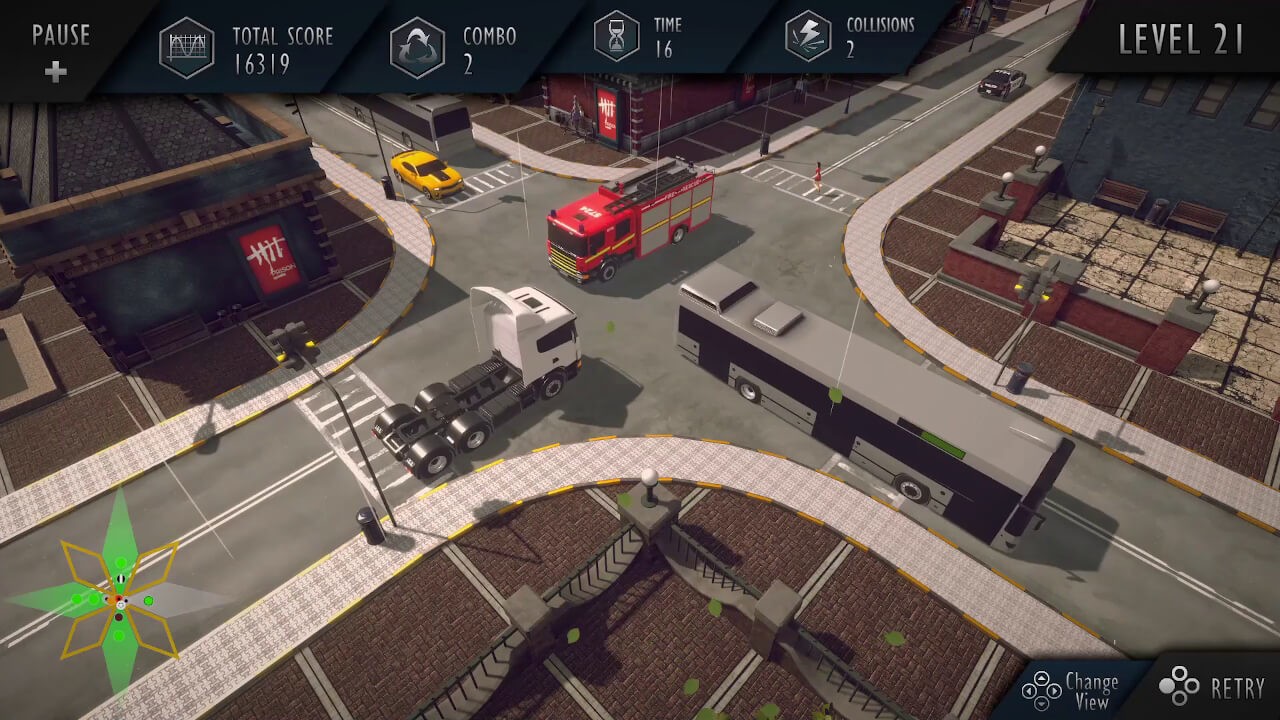 This is a slow-paced title that allows you all the time in the world to set up your plan of attack. You’d think it would be easy to control, allowing you to focus all your energy on completing each stage. Unfortunately, the controls are fiddly, and I hit buttons at random just to switch between each set of cars. This is probably linked to the lack of tutorial, but I was left wondering why I couldn’t scroll through each of the vehicles on the level, instead of having to jump between each group. The whole set up was clunky and cumbersome, but would probably work very well with a mouse and keyboard.

With only 30 levels to experience, and a limited understanding of what it takes to achieve perfection, I found it tough to keep wanting to play. If you add to the mix, the lack of understanding of each of the vehicle attributes, it all leads to a frustrating and unsatisfying time. The developers have missed the opportunity to increase the replay value, which could have easily been increased with daily challenges, custom levels, or local and global Leaderboard’s to see where you stand against other players.

Perfect Traffic Simulator could have been a fun, casual game that would have ticked several boxes for me. In theory, it allowed you to complete puzzles, create plans, and smash up automobiles. In reality, it misses the mark on all of these, and asks the player to guess their way to victory. A lack of tutorial, or any guidance throughout leaves you scrabbling around in the dark, and this just left me feeling unfulfilled. Do I recommend that you try this? No. There will be a market for it, and maybe I missed the point, but I can’t advise you to buy a game that left me wanting to play something else. Can you control the traffic and prevent the collisions? If you are the master of guessing, and very lucky, you will succeed.

Cars will crash, and levels will be failed in this puzzle-strategy game. Observe the traffic, and adjust each vehicle to create the perfect road conditions.