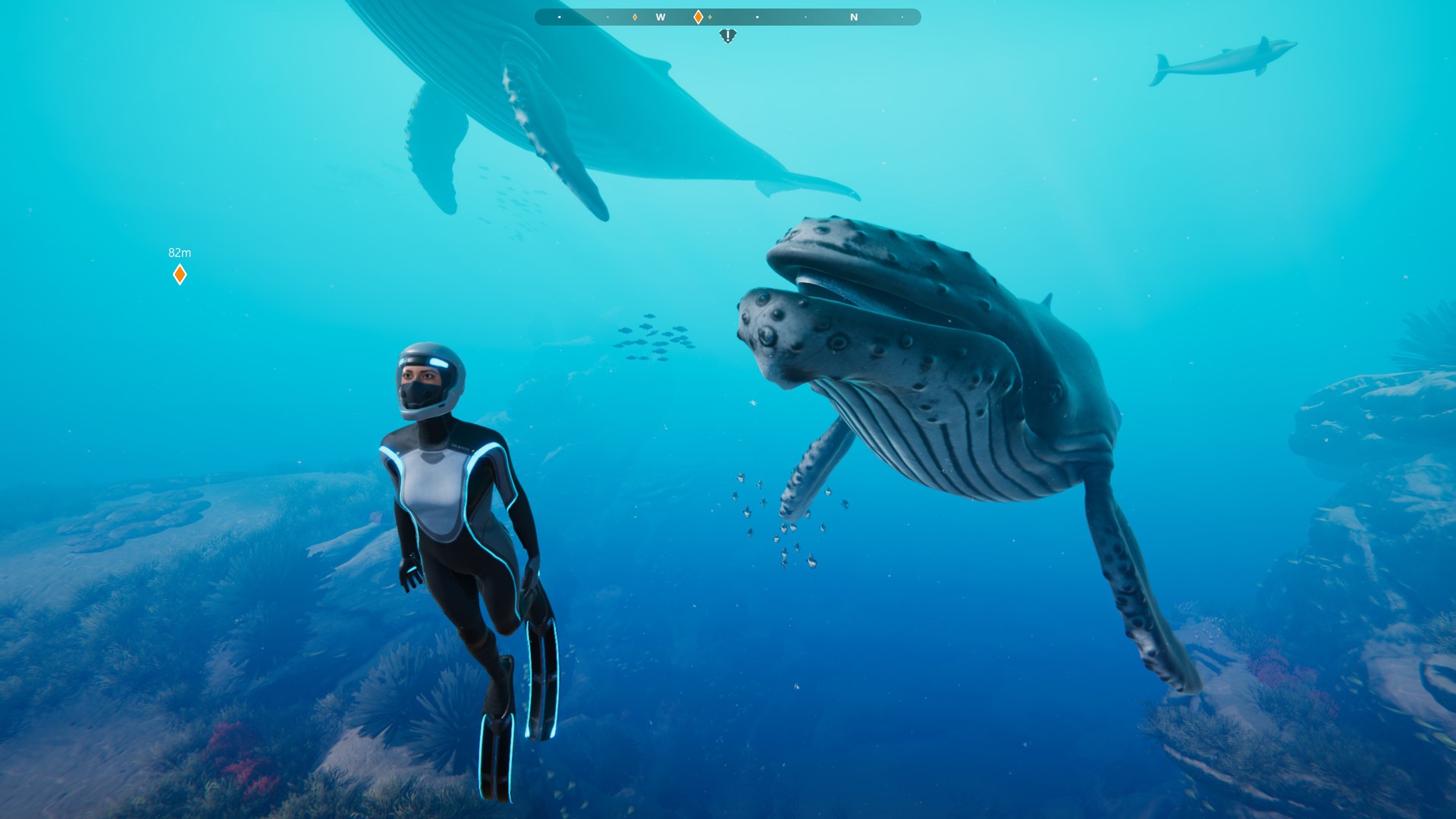 Flower is one of my favourite games. For one thing, it was revolutionary the way it uses the six-axis controller to control that gentle stream of petals and for another, there was a Zen to drifting along and just enjoying the game’s ambience. Beyond Blue delivers ambience in spades and, though there are no puzzles to solve, there’s a certain Zen to observing marine life in its natural habitat and methodically cataloging it via scanner. There’s even a narrative-driven story to accompany your exploration, delivered via fully voice-acted dialogue exchanges, but otherwise, it’s just you and the big blue.

Your first dive acts as a tutorial and therefore you’re immediately put into the water. This was a great first impression as I was simultaneously told what to do and able to put it into practice. The controls are simple: swim with the left stick, pan the camera with the right stick. Swimming quickly or “dashing” is toggled on and off with L3. L1 brings up your scanner while holding R1 on fauna within range will scan them and add their data to a catalogue you can view from your menu. X is used periodically to interact with different objects based on context. There are also new tricks you learn a few swims in, including R2/L2 to swim up and down respectively and square, which changes the lighting on your suit, and a zoom scan utilizing a drone that can be used to more closely examine creatures important to the story. Swimming moves at a pretty good pace and you don’t want to move too quickly considering you’ll scare off smaller scan targets. There’s no stamina bar to speak of, which seems strange considering what a tiring task swimming is, but I understand where the decision came from. There’s nothing relaxing about running out of stamina and waiting for it to recharge. There are no health bars, no timers, and no reason to go at anything other than your pace and Beyond Blue gives you plenty to marvel at while you’re at it. 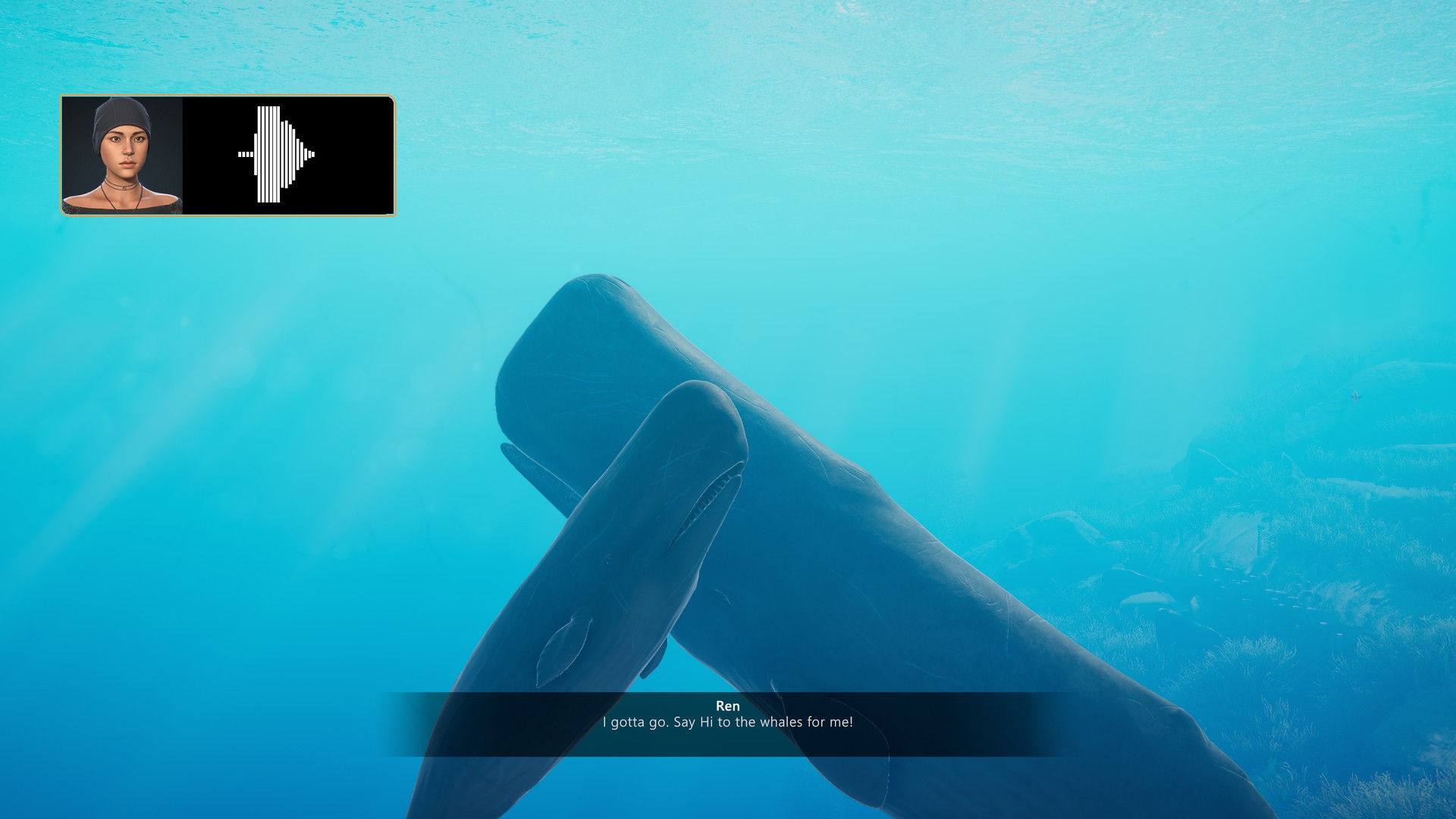 After you’ve learned the ropes, you’re introduced to the reason behind these dives: a family of sperm whales your controlled character, Mirai, is tracking and studying. For many of the dives, she runs a Livestream to raise funding for their studies, and dialogue between Mirai and marine biologists Andrè and Irina serves not only as an oftentimes amusing, organic way to push the story along, but also an emphasis on the passion of people in the researching field. Conversations with Mirai’s younger sister, who she’s left at home with their Nana, the very woman who taught Mirai the love of the dive, further casts light on what drives the person you’re controlling, making it easier to empathize or at least sympathize. It was a simple and effective way to wind the story throughout Beyond Blue without adding in other 3D character models (which, by the way, are pretty rough) or locations beyond the ones most important to your mission: the submarine, Atol, and various unique locations within the ocean.

The gameplay loop is as follows: before Mirai can be cleared to dive, she must place calls and listen to voice mails from her colleagues and/or sister. This is where you receive the bulk of the back story I mentioned before. There are various objects within the submarine that change over the course of your dives to reflect the passage of time, but none that you can really interact with save a music player and a table where you can look at models of the critters you’ve scanned. For those completionists out there, there’s a set number of each species to scan, and finding them all will take some thorough investigation as well as the use of your map, on which they’re denoted by gray spots. Beyond Blue’s musical selection is great. It’s a shame you can only ever hear it onboard your submarine, but then having music blaring in your headset isn’t exactly professional considering the Livestream premise. I didn’t miss background noise at any point while diving; the mysterious silence interrupted only by dialogue and organic sounds like whale and dolphin chatter or the churn of movement through water suited me just fine. 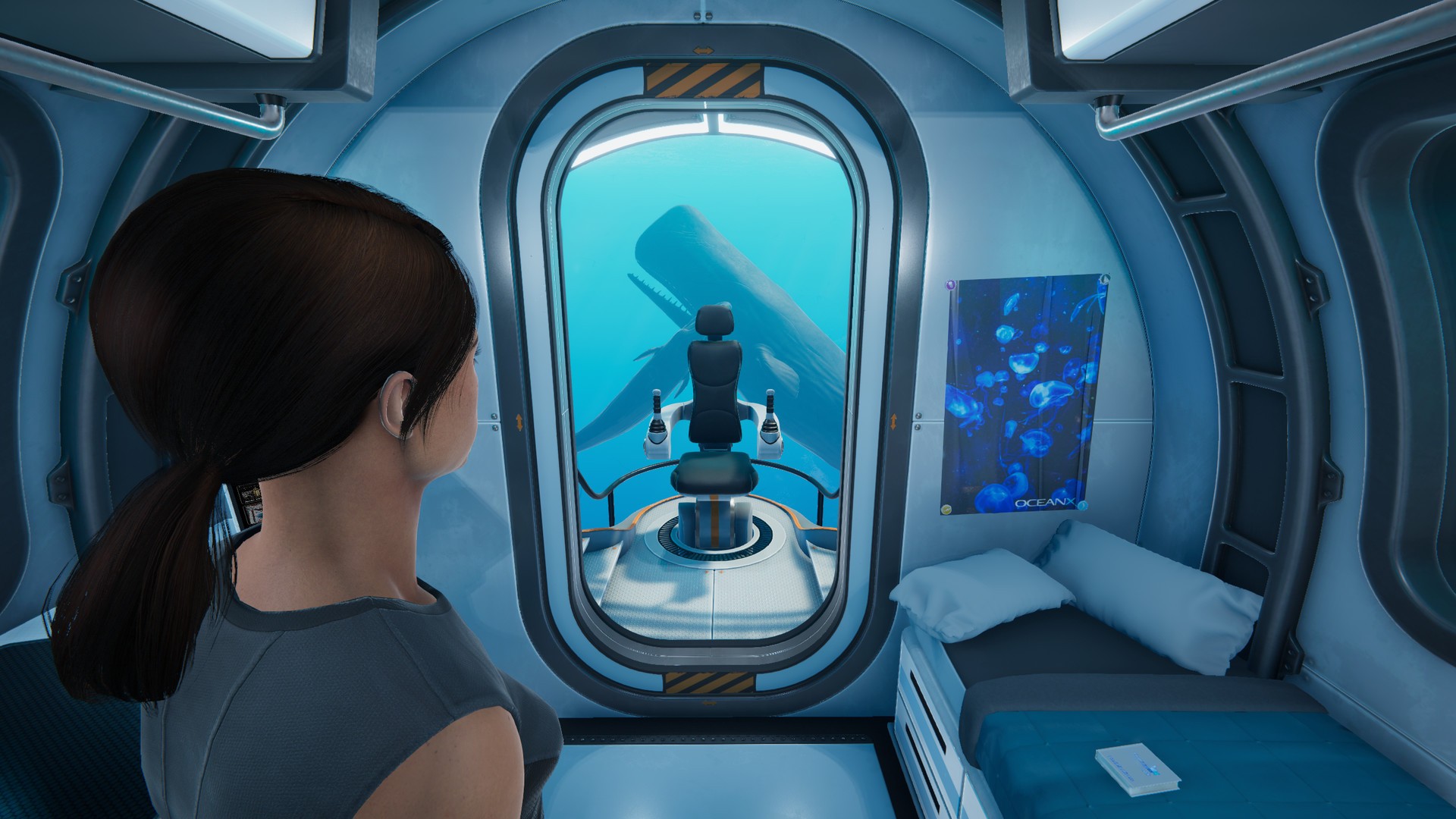 I’ll admit, it was with some trepidation that I began the dives in the latter half of the game. I’m not a fan of water that I can’t see the bottom of, a phobia that extends even to video games, but the serenity that Beyond Blue creates, even when descending into the murky darkness hundreds of feet down, is undeniable. Beyond Blue gives you the opportunity to see things that the average person has no hope of seeing outside of a nature documentary and lets you live those moments to a degree, which is and of itself an incredible feat. It’s the dedication to realism, including fact sheets about the aquatic life you’ve seen and short, informative documentary clips you can unlock as you play, is impressive.

By the end of the campaign, I had begun to think of the sperm whale pod as “my whales” and, though the end credits did a good job keeping me abreast of what happened after Mirai’s return to land, there are still some questions left unanswered. I won’t spoil anything, but Beyond Blue brings up important topics like the destruction of our oceans—how industrialization is always ahead of scientific discovery and how it should be the opposite. I’m not a bleeding heart by any means, but the message resonated with me and that’s how you know you’ve done a damn good job telling your story. My only regret after playing Beyond Blue is that I can’t erase my memory of it and play through again to experience the same wonder and awe I did the first time.

Beyond Blue is one of those games that stays with you long after the credits roll.