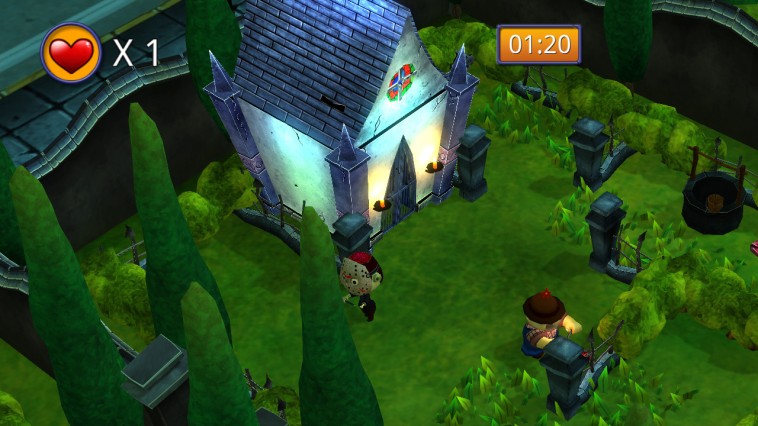 The Grim Reaper, the master of space and time, the one constant in the universe with the power to end the life of every last one of us. Unless this mastery happens to involve any type of horticulture or errant Granddaughters, where the hooded and scythed one appears to come up short and requires the assistance of a mere mortal. In this case, your character Grumpy must mow the lawn and find keys to help Death stop his granddaughter from continuing to unleash the undead on the world.

Such is the frankly strange premise behind Grumpy Reaper and the motive behind you guiding your gardening character across forty levels of grass cutting mayhem while avoiding the undead, who have turned up to ruin the party. It is not such a horrible experience either, Enjoy Up have spent their time making sure Grumpy Reaper looks the part in terms of its presentation and while the main game graphics are on the simple side they are certainly full of character and colour.

Your task is quite simple, you guide Grumpy around an isometric maze, lawnmower in front, cutting down any grass you see while at the same time trying to avoid the inhabitants of Death’s various gardens. Most of the inhabitants are simple zombies,  but you’ll encounter bats and ghouls, all intent in having you shuffle off this mortal coil. While you cut,  you’ll collect fuel and coins and each of the completed levels will give you access to keys. Keys are important because it allows you to buy health and fuel. Fuel allows you to transform your simple mower into something more powerful giving you the chance to turn the takes and attack enemies and spawn points. You have to be careful though, as fuel is limited, and keys aren’t easy to come by unless you are willing to grind. 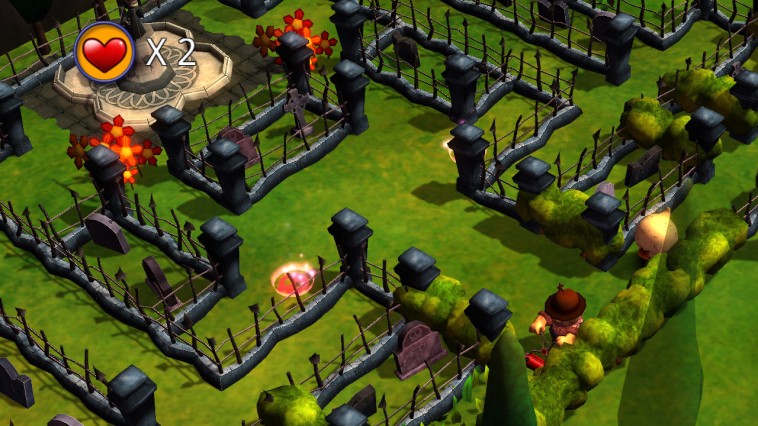 This adds a level of tactics to proceedings, as those who use their fuel stores will run out extremely quickly, many times you’ll be better saving them until you actually need them. As well as those, scattered about the levels you’ll find some handy additional power ups, such as suits of armour, or the sadly unusable whirlwind, which is an indication that Grumpy Reaver wasn’t intended to be released only on Nintendo’s console.

Levels also come with some variety. The usual gardens just need you to cut all the grass in level, but you will also face timed survival levels, where the job is to survive for an allotted period of time. Other levels will put you in complete darkness where you really need to creep forward to find your way around, while some require you to destroy a zombie spawn point. All are varied enough to keep you interested, and you’ll breeze through most of the levels without too many hitches.

What is irritating is that on the restarts you will encounter, any keys or fuel you’ve used will stay used, and it can be difficult to get more keys unless you backtrack and play previous levels. This can lead to some frustrating times in some of the later stages, as exploration and the challenges that lay ahead of you can require you to have to use your precious keys to get past some obstacles until you learn the layout of the level. It would have made more sense that fuel charged naturally over time. It again makes you question if Grumpy Reaper was developed for the mobile market but considered good enough to make the move to console, based on the overall quality of the game. 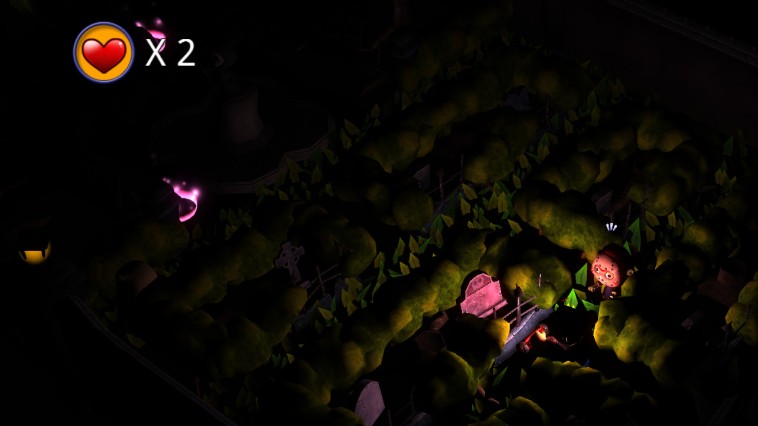 This isn’t some terrible accusation, because it works well for the most part, the level selection and menus are very similar to something you would see on a mobile game, and the graphics are more suited to the smaller Wii U gamepad than the television, where they can sometimes appear slightly simplistic on the bigger screen and you can see the lack of detail on each of the individual characters. There is something very mobile looking in terms of the presentation. The level select something that I’ve seen before in Angry Birds and even the end level screen has the standard play triangle and retry circle with an arrow in it with the three horizontal menu lines.

At the same time, the icons for energy and fuel could work easily as touch icons. I still have no idea what the collected coins are used for and no clues in the game either. What also doesn’t work so well is the whirlwind power up which requires you tilt the screen in the direction you want it travel. Holding the Wii U game pad at 45 degree angle means it automatically ends up travelling to the bottom of the screen the first couple of times you use it, and using it as intended requires you to hold the pad at a really awkward angle. Something better suited to a phone in my opinion.

In fairness though, Grumpy Reaper is a novel idea that is executed with fun cartoon presentation and moments of real fun and challenge. Some will find the enemies in the later levels to be bordering on the unfair side while others will find the way the fuel is gained to be frustrating with the requirement to collect keys. However, if you look past these criticisms you’ll not feel you’ve wasted your money on Enjoy Up’s grumpy and Grim little garden game

REVIEW CODE: A Nintendo Wii U code was provided to Bonus Stage for this review. Please send all review code enquiries to press@4gn.co.uk.