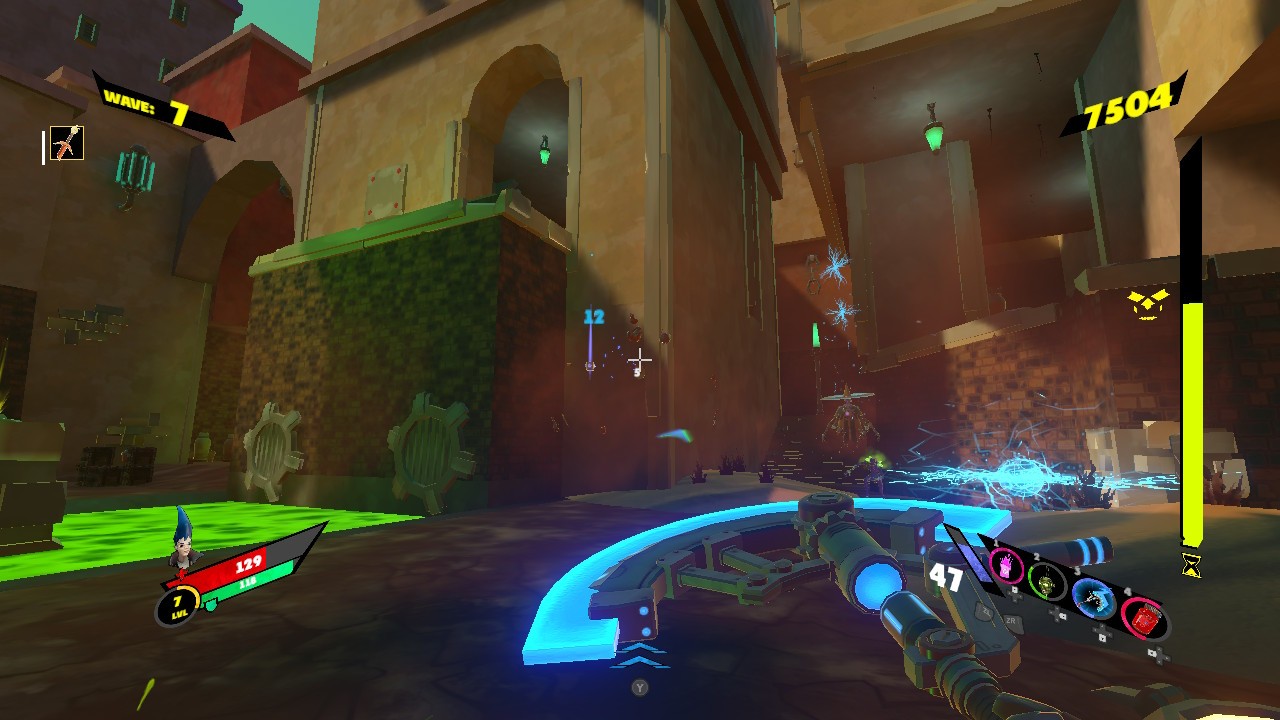 When I first started playing Mist Hunter I wasn’t sure how I felt about it. It didn’t look to offer too much in the way of gameplay and looked like it would be a rather dull experience. But after spending more and more time with it, I found Mist Hunter can offer some quick and enjoyable gameplay that fits right at home on the Nintendo Switch, despite some of its rather noticeable problems.

Mist Hunter is a time attack, first-person shooter game that sees players fighting to survive while managing and refreshing your timer as you fight off increasing amounts of enemies. If you were hoping for more plot than that, you’ll be disappointed. It basically amounts to you’re poisoned, grab timers to stay alive, kill enemy waves. It’s about as simple and to the point as it gets. I wasn’t able to find any explanation as to why you poisoned or any real mention of the story in the game, but given the games arcade nature, it felt irrelevant anyway, and I wasn’t exactly looking for a deep narrative.

Upon loading the game you’re presented with the option to begin a game and you’ll have a selection of stages that offer up some different environments and variety to visuals, each with a great soundtrack that gave energy to each representative stage. Other than that, you’ll be hard-pressed to find much else in the way of gameplay. With no additional modes or gameplay options, Mist Hunter can be extremely limited in replayability, only really offering enjoyment in small bursts a few minutes at a time unless you thoroughly enjoy the gameplay. Given I reviewed this on the Nintendo Switch, in a way it seems like the perfect fit for Mist Hunter and its quick and simple premise, but that doesn’t help its lack of any meaning gameplay options any less obvious, and ultimately can become boring a bit too quickly for some players. 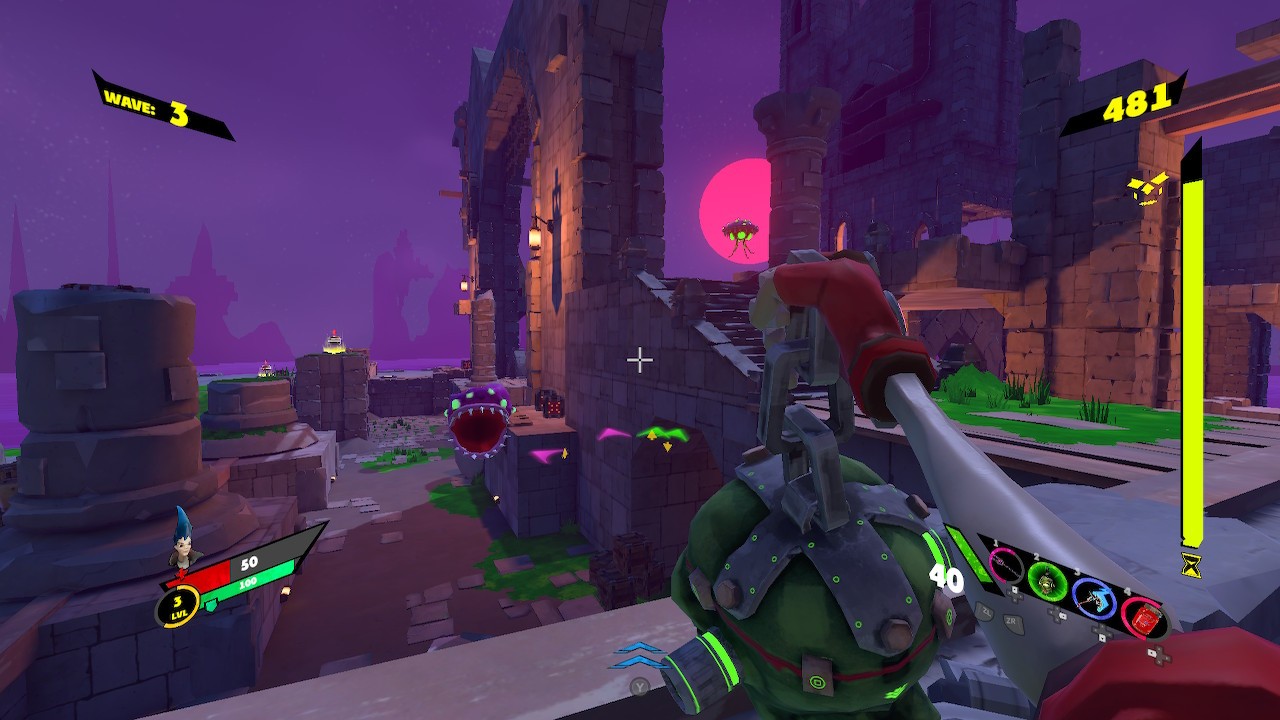 Leaning into what feels like arcade-style gameplay, Mist Hunter aims to give players a quick and exciting burst of gameplay that emulates the frantic and fun found in arcade games of old. Players are given a selection of 4 weapon slots each offering 3 weapons, with a chose of ranged and melee. These weapons do offer a nice amount of variety in how they work, with a fair few having primary and secondary fire modes, but the main mechanic of combat uses colour. Enemies come with 4 different colours, pink green blue and red, and matching the weapon you are using to the enemy colour results in more damage and gaining more points during combat, making for some quick thinking and dynamic moment to moment gameplay.

Enemies offer up about as much variation as the weapons, with each colour having 4 enemies that vary in looks and abilities. Some will fly overhead while others move quickly around the arena, with each bringing a new level of threat as you move around each arena avoiding attacks and projectiles, which is made more rewarding by the verticality at your disposal.

Dashing from ledges and over large areas with your double jump gives traversal a sense of freedom similar to free running, with the somewhat floaty controls being the only downside. It’s these floaty controls that diminishes what would otherwise feel like a very visceral and intense scramble for survival as movement or dashing doesn’t quite have the feeling you would expect. The same can be said for the weapons to a certain degree, with most of them feeling light and lacking in some real impact or feedback that would give everything a much more punchy and weighty feeling that could really enhance combat and game feel. 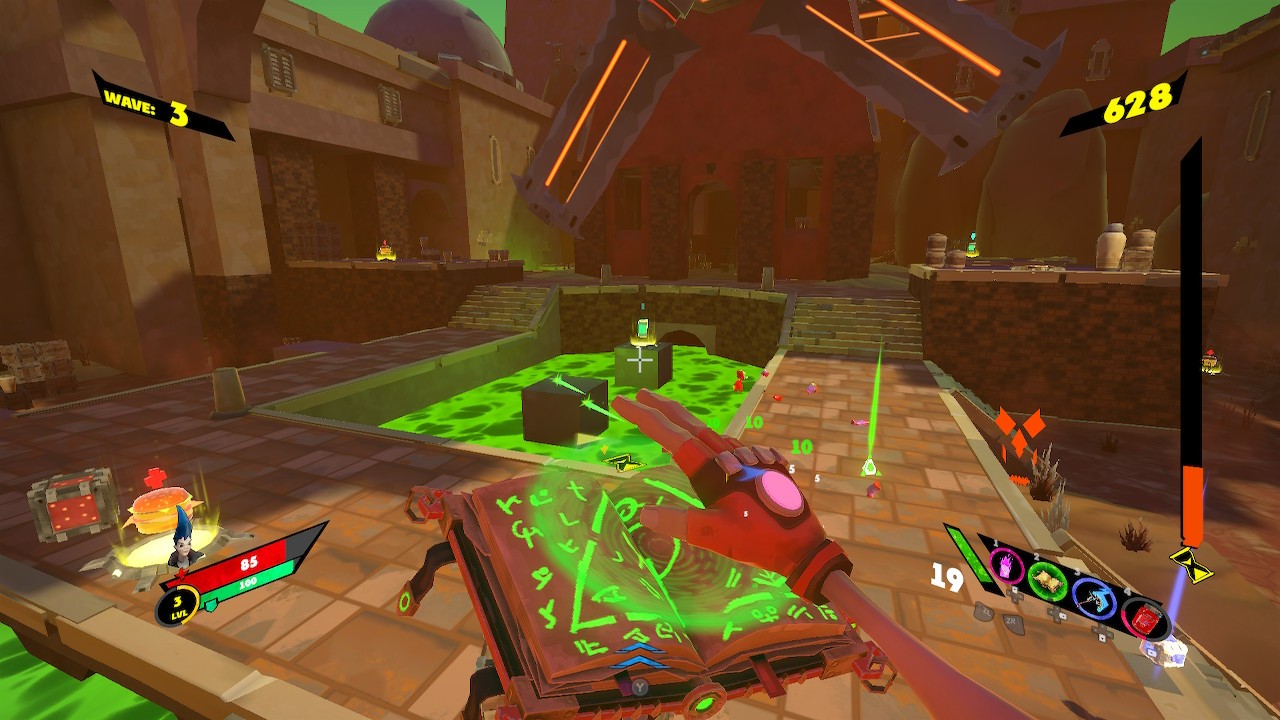 Mist Hunter also includes a levelling system that sees players gain increased health and a selection of trophies and passive upgrades that affect gameplay in varied ways, ranging from critical hit and damage increases or protect from your own explosives. With over 100 upgrades available that can be unlocked through gameplay, Mist Hunter gives a great amount of depth to how you approach each time you play, with three of these abilities being chosen at random, with you being able to choose one with each new level.

Despite these notable features, Mist Hunter does suffer from fatigue very quickly as I found myself become bored after only a few short games. It isn’t helped by some of the lower difficulty settings proving to be rather slow and not fully utilising the wealth of potential the games shows in its enemy variety and weapons, regardless of their simplicity. you’re hoping for a more challenging experience and want to get the best out of Mist Hunter I’d recommend playing on hard difficulty, as it uses the colour matching combat system and levelling far more effectively given the more difficult gameplay, that in turn makes it far more rewarding.

Mist Hunter has got its issues but shows a lot of potential from developers Flox Studios. Taken in smaller bursts, Mist Hunter offers up a fun and enjoyable arcade-style experience that can be a rewarding past time when you need a quick moment to escape. Its lack of modes is a big downside, but what it provides it just enough to keep you entertained in small doses and thanks to the Nintendo Switch’s portability, it feels right at home.

Mist Hunter offers a quick and fun past time that fits perfectly with the Switch’s portability, But a lack of modes and variation stops it from realizing its full potential.