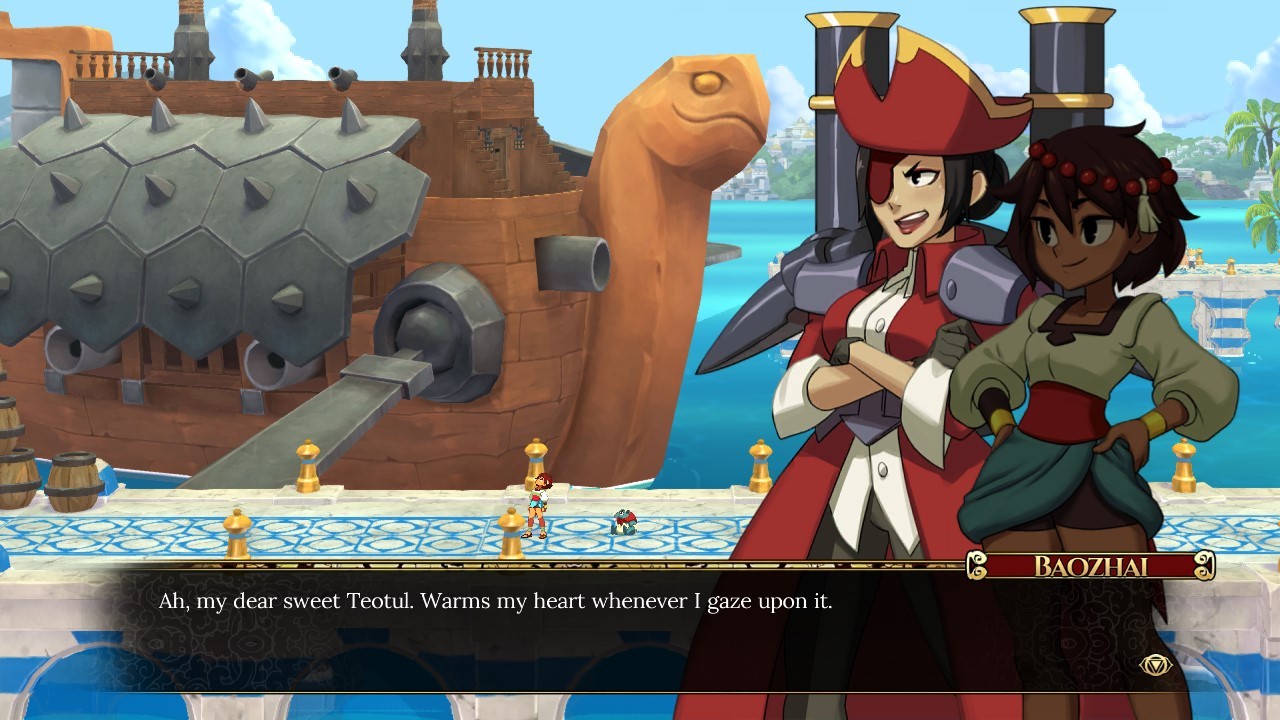 This game is freaking incredible.

I know. Before anyone says anything, I know. I realize that Zero Lab Games was totally caught off guard by 505 publishing Indivisible before they were ready. I know there’s optimization that’s missing, a co-op mode that will be put in later that’s also missing, and everyone on the Internet wants to grab pitchforks and yell and be angry. I’m fully aware of this situation, and I’m glossing over it because that’s not the purpose of a review. The purpose is to look at a game that’s currently available or will become available shortly for public consumption, play it, assess it, and give it a grade to which other would-be players can measure and deem whether this game is worth their time or not. When Bloodstained was released, I enjoyed the game but was pretty put off by the optimization issues and the appearance of some things. The game is better now, but my score is from when it launched. And how I rate Indivisible now has nothing to do with the politics of it all or the policing of developers or taking sides on an issue that we can all speculate about but, frankly, have no real idea about how it happened. This is the game, as it is now, a title that I was interested in when announced years ago and, in the current timeline, is finally available.

So I’ll reiterate: this game is freaking incredible.

Indivisible is a fantastic blend of action, platforming and RPG elements that is presented with a pristine art style, wonderful voice work and some of my favorite combat that I’ve experience in recent gaming memory. It’s a classic story of adventure and vengeance told from the perspective of Ajna, a young woman whose life of unexplained training with her father takes a sharp right turn when her village is invaded at the behest of Lord Ravannavar. Her father is slain, and Ajna immediately springs to defeat the commanding officer, a man named Dhar. In this fight, though, Ajna seems to awaken a mysterious power: the ability to tap into an Inner Realm, a pocket dimension that exists within that, strangely, seems to absorb people and hold them inside her mind. Dhar becomes the first, but definitely not the last, of reluctant and eventually enthusiastic helpers to join her mind army, and, as time goes on, we see that Ajna’s strange power might awaken more than just her own strength: it could be the key to changing the entire world. 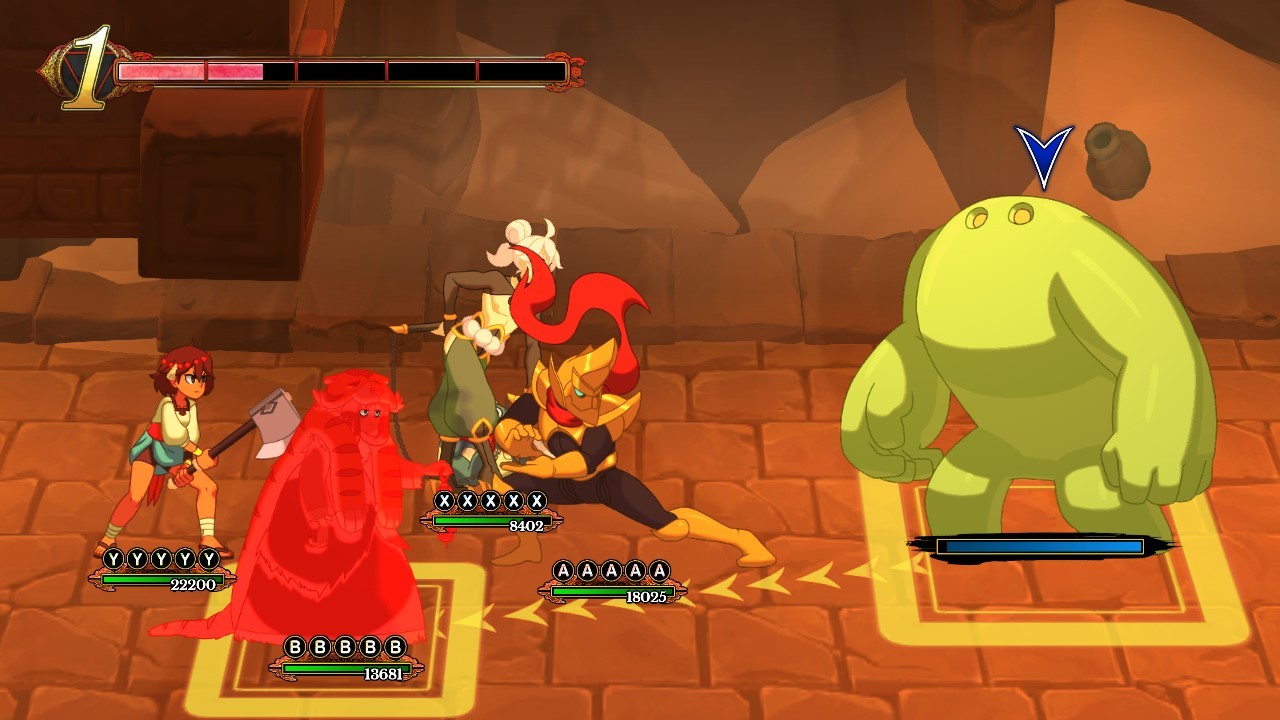 After an incredibly dynamic opening video and a mysterious battle that foreshadows events from the past, Indivisible throws you into Ajna’s shoes with very little preamble, giving you a chance to figure out the pace and tone of the game on the fly. Everything is sidescrolling action and adventure with a heavy metrovania tone to your exploration. Very early on, Ajna sees strange doors and block areas that pulse with promise of something in the future, but you have no immediate way to get through or go beyond. Instead, as you progress, Ajna discovers and unlocks more abilities to climb higher, hit further targets, and enjoy the axe that was promised to her as a young girl (the reunion is a hallmark of the offbeat humor of the game). Even when you get the tools to open up previously inaccessible areas, the way back isn’t clear or easy at first: it’s up to the player to remember and catalog some of the roads not taken in order to validate whether they’re worth going back for or not. Spoiler: most, if not all, are worth it, especially thanks to the systems within the game.

Players will immediately see that Indivisible is a gorgeous game, done up by  Zero Lab Games with the same meticulous detail and painstaking care that they put into the character design of their other title, Skullgirls, though this is elevated even further. While Skullgirls has a polish to it that incorporates a bit of the cartoonish nature of fighting games with the unique universe of their characters, Indivisible tells an otherworldly story through the landscapes and characters. Ajna’s village and her own wear speak of a tribal element that reminds me of ancient warriors, but Ravannavar’s imposing fortress brings a sense of oldworld technology set against some beautiful, marbled designs. From deep caverns below the ground to expansive, breathtaking skylines, Ajna’s world is one to behold, and players can drink in something new and startling at every turn. The animation is set to a high framerate, allowing Ajna’s dashes or  the way that traps explode out at her to capture the eye and stick in your throat during perilous or dramatic moments. The game is a beauty to behold, and it comes together even better during the bread and butter of the journey: the combat.

Indivisible has taken a very simple idea of single button sequences with arrow supports and transforming it into a style that mimics fighting games while aspiring to something even greater. As you go, Ajna will discover stones that act as powerups to affect combat beyond the levelling system (which adds to your HP and overall attack/defence). More stones means increasing the number of times you can land blows during a fight, and a max of four party members at a time means assigning one button to each participant. Like all great fighting games, there are two approaches: button mashing and learning the techniques. If you simply keep hitting the buttons as fast as they fill up, players will, with little difficulty, overtake and defeat most ground mobs and even a few of the bosses. However, to really ascend, players must figure out the nuances of it all. When you want to combo two party members back to back. When to shift from fighting into defence, or even healing properties. You have a rechargeable bar that can deliver a superpowered move from one of the party members, but I almost always used that for Ajna’s incredibly helpful “heal and resurrect everyone” move, though that’s more versatile as you level up and are allowed to have more moves. You get characters that can transform and move between forms, like Kushi and Altun, and these forms can shift the way you approach enemies that are too dangerous in one form or another. Enemies have to be blocked with precision timing, lest you get laid low (and, in a couple cases, have everyone knocked out at once), so triumph belongs to patient players who are willing to learn the timing and patterns. 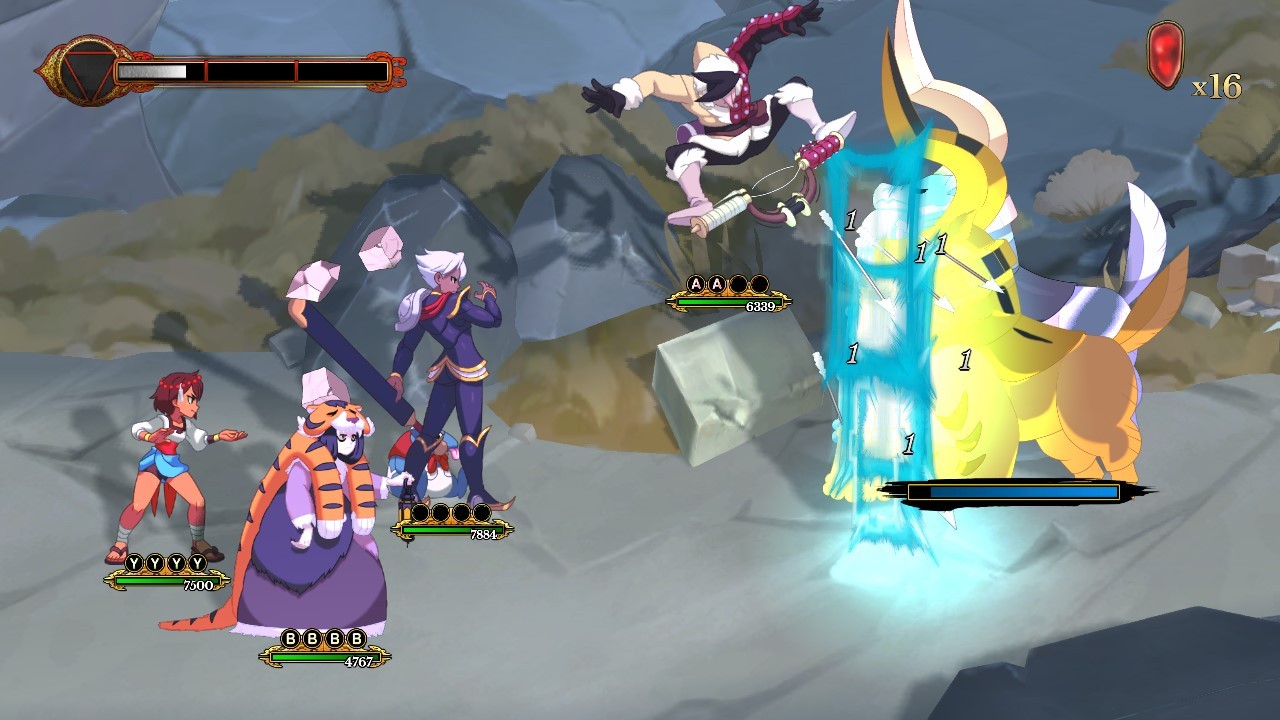 What’s sincerely masterful about Indivisible is the storytelling. Thanks to some fantastic voicework assignments with great scripting (freaking Michael Dorn is GOLD),  you see what starts as a simple and straightforward journey evolve into something significantly more complex and enthralling. Everyone has something to say, even if it’s just an obsession with trying to fix everything through fire, and Ajna needs to grow and develop as a person and as a protagonist as more information comes forward. There’s humor peppered throughout, and it helps to ease the heartache of it all when more becomes clear about what Ajna’s father was trying to do for her all those years. This is one of those games where it could have been any number of things: a book, an animated series, a feature length film. Instead, it became a game, and the game became a fascinating epic that told a history and a tale which simply couldn’t be as important had it been done in another medium. The fact that there are so many things that could be missed but wouldn’t technically affect the main storyline shows a huge amount of thought and love into weaving Indivisible into a highly detailed tapestry. I haven’t found everyone yet, and I plan to keep trying until I do.

Again, I’m sorry that this wasn’t the way things were supposed to be released, and there’ll probably be people who never play past the first five minutes because there is a moment of minor slowdown on the way to visit my father for the first time, and those people will think that’s the temperature for the whole game. But it isn’t. Indivisible is a gorgeous, complete package as it is, and I cannot wait to see what comes in future patches to somehow make the game even better. Lab Zero should be very proud of what they’ve created, and, on that front, their confidence in their game should remain unbroken.

Indivisible might be the adventure of the year, and one of the best combat systems I’ve had in a game in forever.