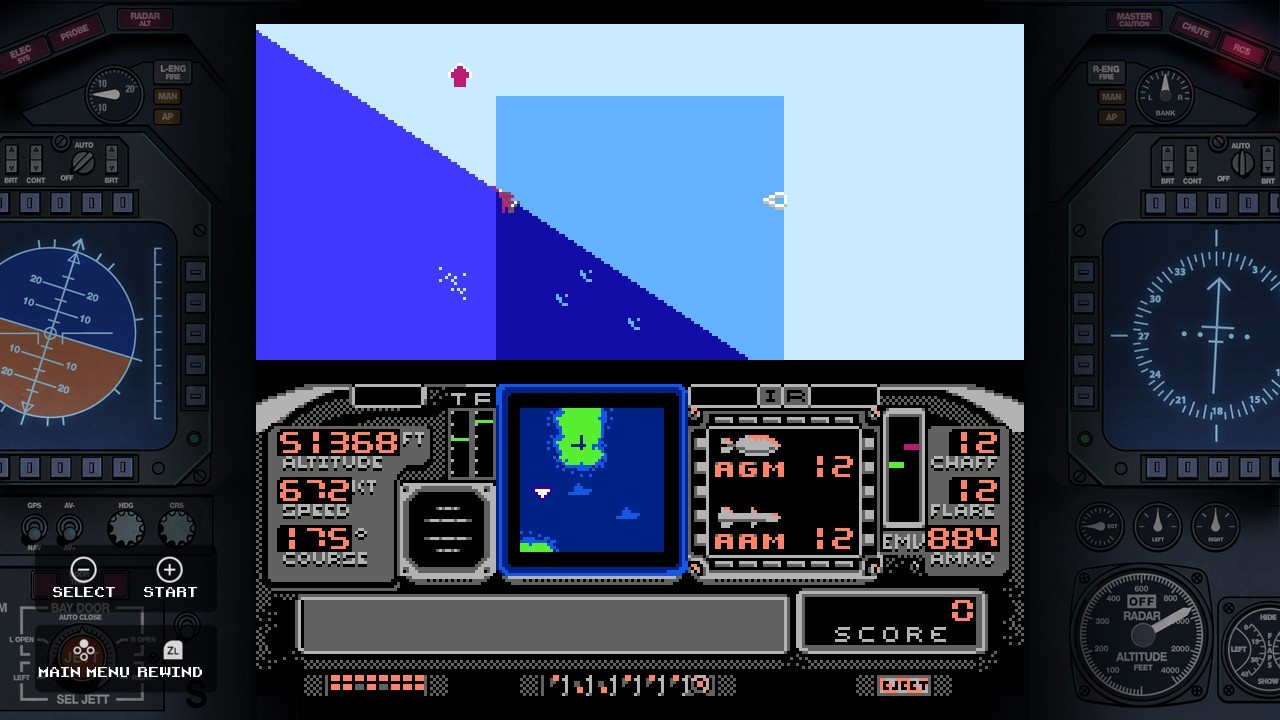 There are many influences that define us as gamers. They usually hark back to the early days of our gaming careers, from the early arcades of the eighties to the home computers and consoles of the nineties and noughties. I first began gaming on the arcade giants of Afterburner, OutRun and Gauntlet, then later transitioned to the home computers of the ZX Spectrum and Commodore Amiga, before revelling in the delights of home consoles from the NES to the present day. However, when I look back at my gaming history, I would probably say the Commodore Amiga was the biggest influence on the way I game and, in particular, the flight and combat simulators of that time. Despite more modern titles within the genre housing spectacular set-pieces, close-ups and eye-watering detail, I still reminisce of the days where outlined trees flew past my cockpit, a change in colour signalled the fly-by of grassy plains and deserts and the chip-tune sound effects as my engine roared. Well now, thanks to UFO Interactive and MicroProse Software, I can experience those days once again, as F-117A Stealth Fighter takes off upon the Nintendo Switch.

First commissioned in 1983 and eventually retiring in 2008, the F-117A Nighthawk was a unique aircraft that was way ahead of anything else of its time. Its sleek design and material components made it invisible to enemy radar and its deadly payload made it synonymous during campaigns such as the Gulf War. It was also the subject of the F-117A Stealth Fighter video game that was developed by simulation giants, MicroProse. It released across a number of platforms, with this Switch edition being a direct port of the NES version of the game. You play the role of a USAF pilot, whom you can give your own call-sign, and fly a series of sorties over locations and eras such as Libya in 1986, the Middle East in 1989, the Gulf War in 1991, Cuba in 1995, Korea in 1996 and the North Cape; as well as a Top Secret mission should you survive each of the conflict zones before it. 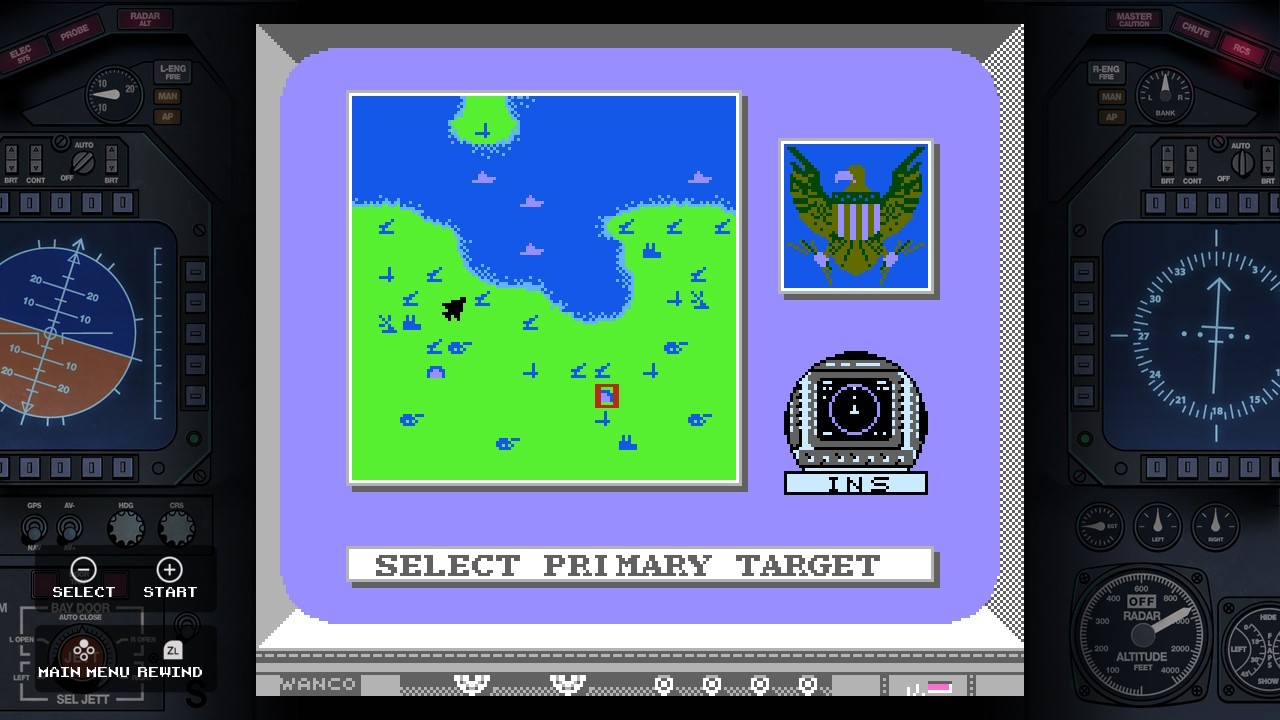 Viewed on a 4:3 aspect ratio, with a surrounding border to fill the screen, you fly the Stealth Fighter from a cockpit view, as you take-off, plot a course to your primary and secondary targets, before landing back at base for a successful mission run. What the developers have done here, is create a perfect replication of the original NES version of the game; even down to the control scheme. In a nice touch, two sets of instructions have been included; one a brief view that is specific to the Switch and the other being the original instruction manual that came with the NES cartridge. From a selection and option screen, you can choose from a series of play-styles, scenarios and enemy difficulties. These include the option to play the game in a two-player, local co-op mode whereby one play flies the F-117A and the other controls the weapon systems.

Once your scenario has been selected, you then embark on your mission. Each mission involves flying to a designated, primary target and two secondary targets. These can range from military vehicles, bases, bunkers and enemy installations. Using a map and waypoint finder, you select your target and fly towards it; you even have the ability to set auto-pilot to fly to your designated waypoint. The cockpit displays all the relevant information, such as heading, altitude, airspeed and payloads; plus you can switch certain screens to display radar images, real-time map positions or damage indicators. Your objective is to try and fly as stealthily as you can, maintaining speed and height, before taking out your designated targets. However, enemy placements and patrolling fighters are always a threat. You can engage air-to-ground and air-to-air, or deploy a series of counter-measures from flares and chaff bursts.

The control of your aircraft can be used with either the D-Pad or Joycons; although airspeed is controlled with the Right Joycon only. However, due to the restraints of the original NES pad, some functions are utilised by pressing a combination of buttons, such as select and the right joycon. Although true to the original, it does make for a cumbersome layout, but it was still one that I was able to live with. The graphical presentations perfectly recreate the style of flight simulators from its era. To put it simply, it’s a form of flight simulation in its most basic form. In some ways, its style hasn’t aged very well at all; especially when compared to the combat flight sims of today. However, saying that, it is still extremely playable and in a funny way, very satisfying to experience its style once again. It does make it a difficult game to score though, as if you’re in the market for a combat flight sim, then its presentation may be a little too simplistic in today’s market. If you’re a retro enthusiast though, or simply want to reminisce of the games that influenced you as a gamer, then this is a little treasure trove that shines brighter than a pot of gold. 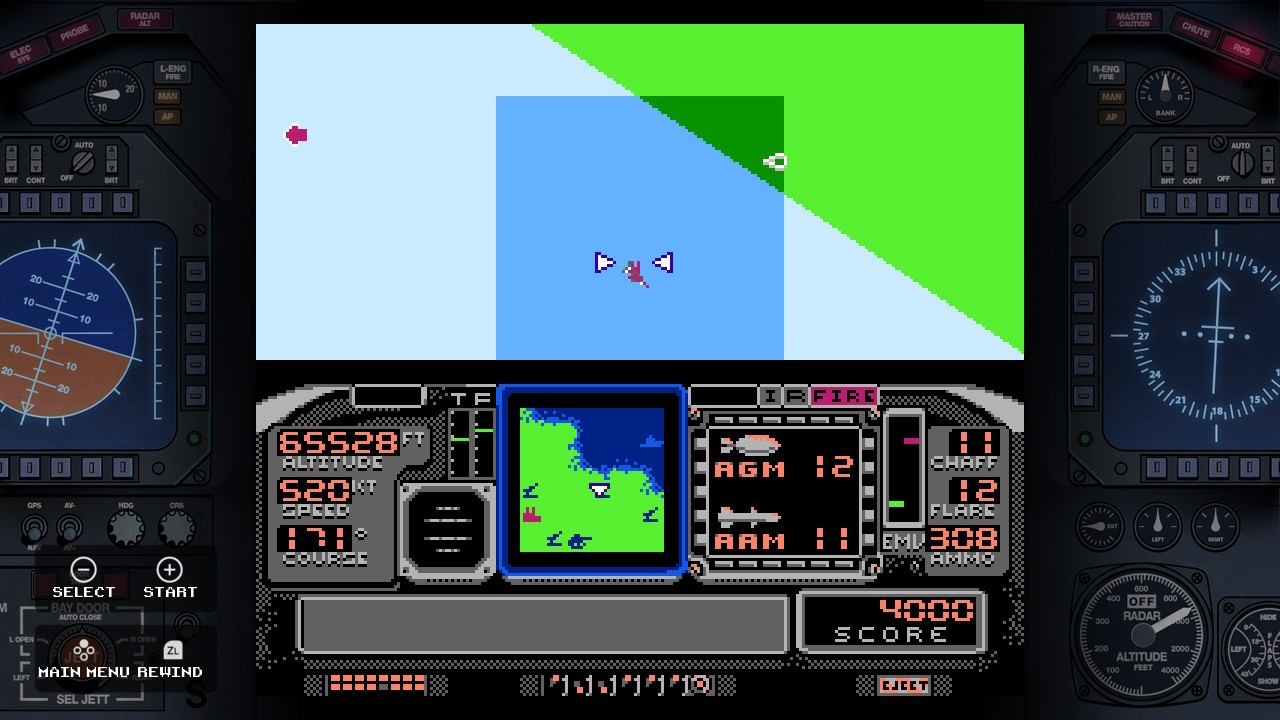 Despite being completely faithful to its original release, this version of the game does contain one or two minor modernities to make life a little easier. The save game states of early consoles used to revolve the use of generated codes that needed to be written down and input again if you wanted to carry on from where you left off. This feature still remains in this game and is a nice touch. However, pressing the X button brings up an in-game menu that allows you to create a save state on-the-fly; meaning that you can pick up and play this game at any time, as well as save its current progress at any time too. Again, it’s also a nice feature and one that improves the game significantly. You can also select from a number of borders to fill the screen around its 4:3 ratio. These include the original case artwork and manual artwork, as well as a cockpit view that blends in nicely with the on-screen presentation of the Stealth fighter’s in-game cockpit displays.

Overall, F-117A Stealth Fighter is a lovely retro throw-back to the days of home computers and early gaming consoles. It looks basic and plays in a basic way, when compared to more, modern titles, but that doesn’t take away from the joy that can be had with this particular title. If you used to play combat flight sims from its era or just love retro games, then this is a pixel-perfect port of past times. Despite its basic look, it is still a sublimely playable game; one that I found difficult to put down once I got used to its control schemes and the way that games like this should be played. This is largely due to the developers creating a perfect port here, one that actually feels as if you were really playing the NES itself. Light the fires and spin the tires, it’s time for take-off as we fly into an absolute blast from the past.

Light the fires and spin the tires, it’s time for take-off as we fly into an absolute blast from the past with F-117A Stealth Fighter.