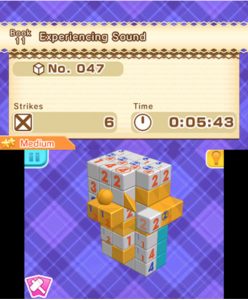 Despite its large and somewhat passionate following, Picross has never taken off in the same way that Tetris did. I for one had never played a Picross game until as recently as last year. Sure, I had heard of it, but truth be told, I never really had a grasp of what kind of game it was. And perhaps that’s the problem. Perhaps the reason that Picross has never matched the wide-scale public attention afforded to the likes of Tetris and Candy Crush is that it’s not that easy to explain and isn’t as easily recognisable from a purely aesthetic standpoint. Most people only need glance at a match 3 puzzle game and they know exactly what they are dealing with – show them a glimpse of Picross’ array of shaded squares and seemingly random numbers however and confusion is a much more likely outcome.

Of course, adding an additional dimension to proceedings along with a new colour system certainly doesn’t serve to make things any easier, but Picross 3D Round 2 is, if nothing else, primarily for the fans, and despite lacking the name recognition of the genres’ most famed examples, the array of copycats to be found on the App Store suggests that there are still plenty out there.

Still, while these new challenges have been created primarily with existing players in mind, the new tutorial system certainly goes to great lengths to introduce new players to the core Picross concepts. While the traditional tutorial certainly does enough to get new players started, it is actually the way that progression is structured that is likely to prove most useful to both new and more casual fans of the series. 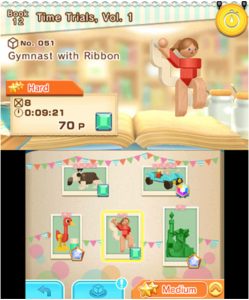 Set out via an array of books to fit in with the games new and extremely charming coffee shop/bookstore aesthetic, progression is achieved by mastering specific challenges that ramp us as you make your way further into that specific book. This leads to challenges coming in peaks and troughs rather than the more traditional gradual increase that gamers are accustomed to, but with more difficult challenges inevitably taking longer to solve, I actually found the chance to go back to something more simplistic and less time-consuming a very pleasant and often much-needed change of pace. This way of introducing new mechanics and skills as you progress also highlights Nintendo’s amazing ability to essentially ‘gamify’ tutorials and to make learning new skills an enjoyable aspect of the overall experience.

Regardless of the new challenges and the somewhat unique structure, at its heart, this is still a Picross game in the most traditional sense of the word, and yes, that’s still a very good thing. It might not have the more immediate gratification of clearing a line in Tetris or putting together a combo in Bejewelled or Puzzle Quest, but when everything comes together and you finally make that reveal, there is nothing quite like it in the genre. Yes, the sense of accomplishment is far from consistent, but when it does arrive, it’s never anything less than hugely rewarding.

That sense of reward is enhanced further by the 3D nature of the puzzles that now reveal some very cool 3D art that include the usual collection of everyday items along with a selection of Nintendo characters that can be unlocked via the games’ limited but nonetheless successfully implemented Amiibo support. Of course, the game itself is visually limited by its design, but as far as puzzle games go, Picross proves a carefully constructed experience, one that employs simplistic charm over the more traditional overeager fireworks that the genre is becoming increasingly famed. 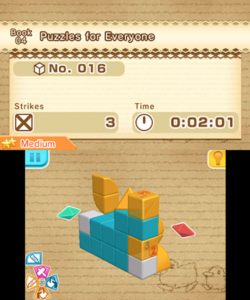 Of course, aesthetics and structure aside, what really counts is the quality of the puzzles, and as always, this is where Nintendo and Picross excel. The core of the ‘classic’ Picross experience is still here, but with the new colour coded system added to the 3D perspective successfully established in the last game, Picross 3D Round 2 feels like a totally natural progression for the series, one that never loses sight of what made the series so unbelievably addictive in the first place. You still mark blocks as you progress based upon the small amount of numbers provided at the start of each level, but now, you are also tasked with marking each block as blue or orange with the orange blocks subsequently changing shape and thus allowing for more elaborate final reveals. The end result is much the same as it has always been, but a full 3D Mario model is a pretty major step up from the old pixelated images of yore.

With tons of content in the primary Picross mode and plenty of additional challenges included in the equally compelling Micross (a mode that tasks you with combining numerous puzzles to create one giant reveal), Picross 3D Round 2 delivers plenty of traditional Picross gameplay with a host of subtle but incredibly successful refinements. The 3D puzzles are as entertaining as ever and the new colour coded system adds a cool twist to the core gameplay without over-complicating or losing the essence of the traditional Picross experience. You might be able to get any number of “free” puzzle games on your mobile phone, but there is something to be said for a polished and fully featured puzzle game that isn’t asking you for money every 5 minutes. It might not be as popular as Tetris or as flashy as Candy Crush, but Picross remains as addictive and enjoyable as any puzzle game on the market.