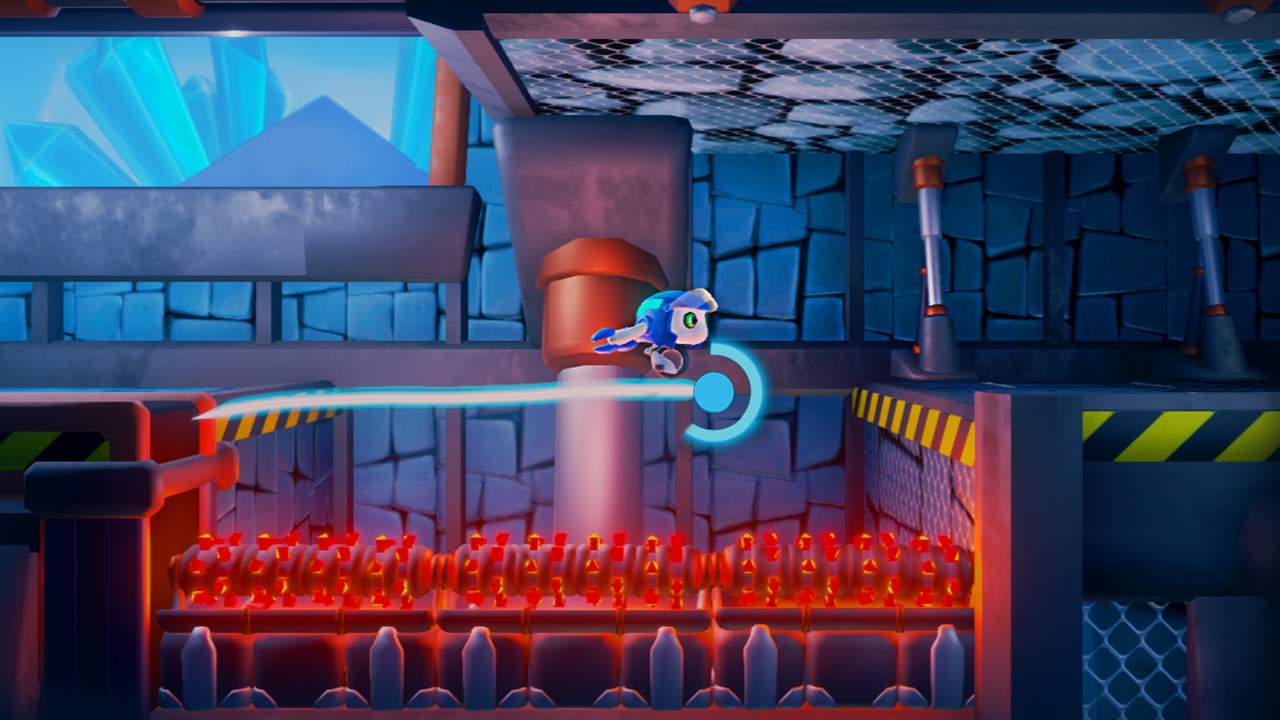 Rolling Bob, from developers Moon Factory is, at its heart, a simple family friendly puzzler/platformer. An evil overlord has kidnapped all of the children in the land, and all of the energy needed in order for Bob’s people (a peaceful society of little robots with wheels instead of legs) to evolve into another form. It’s up to Bob to travel through a trap-filled factory, reclaiming the energy and the children conveniently dotted around, to save the day. What makes Rolling Bob stand out is its interesting use of the PS4 controller’s six-axis system, which is used to solve puzzles by drawing new lines on the screen to reach new areas, or to protect Bob from harm. Confused? Let me explain.

Bob is rolling by default. Pressing R2 will speed him up, and holding L2 will stop him completely. Bob can paint lines of energy he can use to travel around the stage by pressing X, and a cursor on the screen represents this. But instead of using the analogue sticks to move this cursor around, you move the controller. Kind of like the Nintendo Wii. So you roll Bob around the level and use his ability to make bridges to cross gaps, reach higher areas, block danger and so on, until you reach the end of the stage, hopefully with all of the children and as much of the stolen energy you can find. Simple. 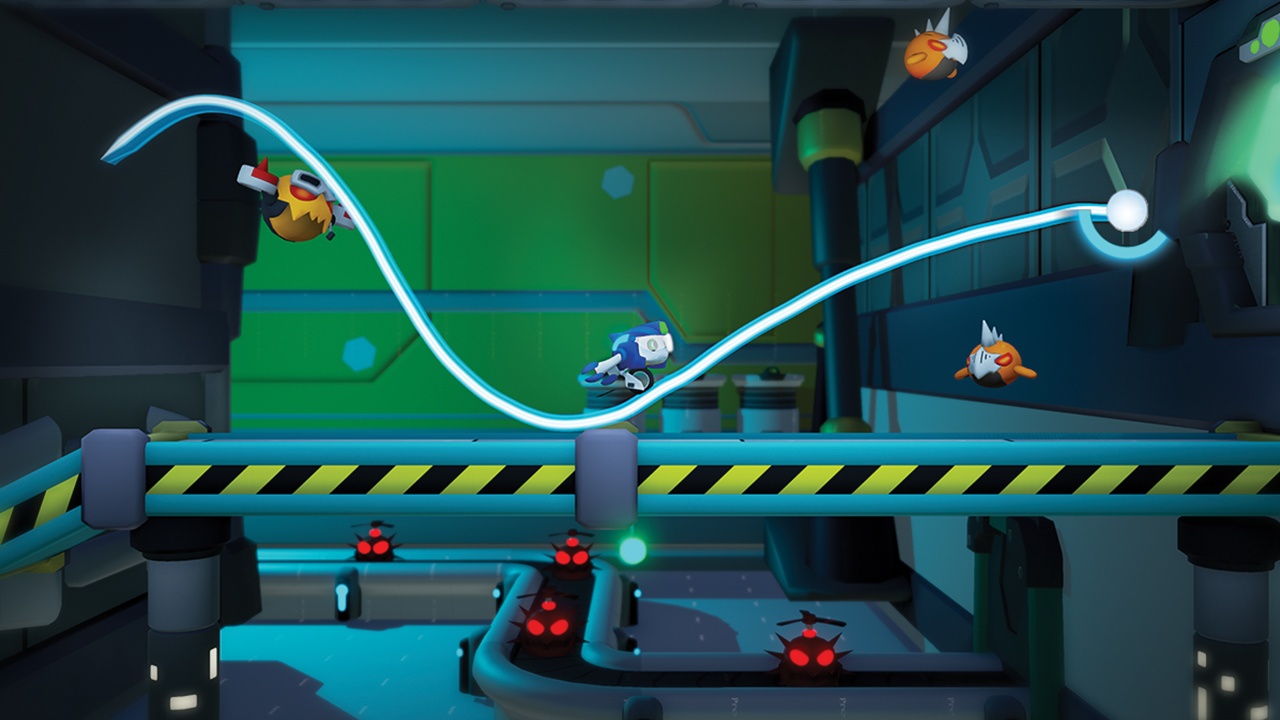 When I first started playing, it was hard to be bothered by what was going on. The story is uninspiring, and everything, from the looks of the character models, down to their names (Megas, Bites and Big Heads, to name a few) are all pretty generic. The opening levels were too dull and made motivation to continue difficult, with little-to-no danger being presented in order to stop me from reclaiming the energy or the children that had been stolen. The controls took a bit of time to really get the hang of, and initially, instead of painting a smooth little bridge for Bob to roll across, I was painting ugly, jagged roads that he had difficulty crossing. Neither my skill, nor my motivation to play, felt very promising.

But after a while, you do get the hang of it. You start painting the line smoothly under Bob’s wheel, and he glides effortlessly along it and away from danger. The game introduces new mechanics (albeit slowly), such as flaming jets that need to be blocked and bombs to be dodged, that actually require you to think about the path you paint in order to get to the end of the stage. Levels will start to include hidden areas that require further exploration. If you keep with it, eventually the game starts to challenge you enough that each stage will take upwards of twenty minutes to complete. It’s all, well, just fine, I guess. 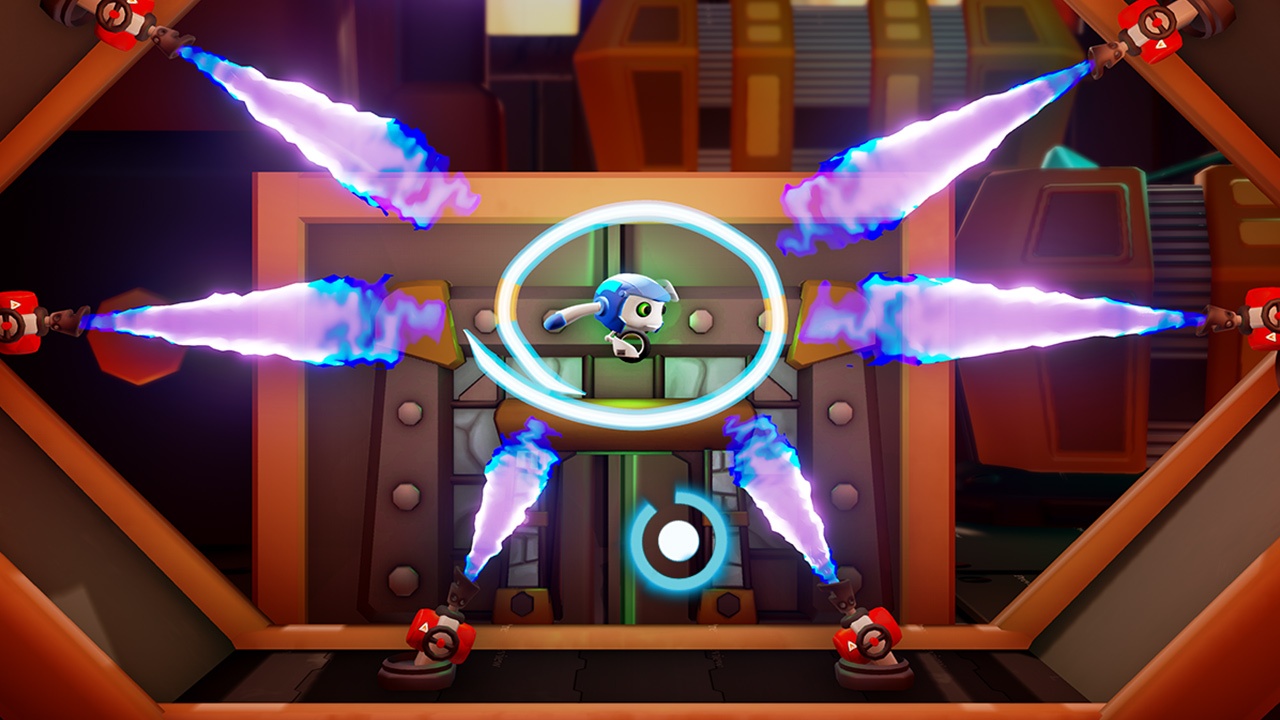 The ability to paint a path on the screen is nice, and the use of the six-axis is, indeed, a different approach to conventional gaming. The problem; it just all gets a bit repetitive. Sure, the puzzles are pretty well thought out, and will require you to paint multiple platforms at once to block flames and cross paths, but a few power-ups would have been nice. Maybe the ability to paint lines that do different things, like speed up Bob, or destroy enemies. There was no quota that needed to be met to complete a level, and as such, collecting things felt quite pointless. Both the visuals and the sound design, in my opinion, are also pretty poor. The character models all seem a little bland and devoid of any real personality, and the level design, while not bad, seems a little rough around the edges and could use some work. The music is forgettable and repetitive. While none of it is bad enough to ruin the game, it’s nothing much to write home about either.

In its current form, Rolling Bob is a game more suitable for mobile or tablet, than the PS4. It’s nice that Moon Factory have taken the time to craft something that makes use of the often forgotten about features of the PS4 controller, it just feels a little bit too gimmicky. Bob rolling by default adds a level of unwelcome trickiness that in reality, the game didn’t require. I would have much preferred that L2 and R2 moved Bob forwards and backwards instead, as that would have allowed me to plan and paint a route without feeling rushed by the game. I played through and managed to complete about fifteen of the thirty levels offered in the game, and by that point had no motivation to see the end. Platform fanatics might see something a little bit different to the norm, but all in all, it’s a pretty average game.