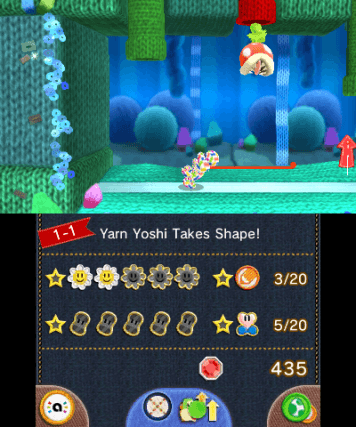 I loved, Yoshi’s Wolly World on Wii U. It remains an underappreciated gem on a largely underappreciated platform, one which, despite its somewhat forgiving difficulty, remains one of the finest and most charming 2D platformers of the past few years. Some wrote it off due its laid back sense of challenge and its perceived lack of new ideas, but Yoshi’s Woolly World provided a very decent challenge for completionists and was home to more unique ideas than it was ever given credit for.

As much as I loved it for its gameplay and its utterly gorgeous visuals though, the reason that I was so compelled to finish every last challenge available was the inclusion of its fantastic co-op mode. Sadly, that co-op mode is completely missing for the all but identical 3DS port, Poochy and Yoshi’s Woolly World. Still, while there is no getting around the fact that the complete lack of co-op is a loss, Poochy and Yoshi’s Woolly World remains a fantastic platformer and a fine follow up to both Kirby’s Epic Yarn and the much loved, Yoshi’s Island.

The mechanical similarities to Yoshi’s Island ensure that this yarn-based follow up won’t have the same lasting impression enjoyed by the stunning SNES original, but thanks to those gorgeous visuals and the fact that nothing else on the market feels quite like it, Poochy and Yoshi’s Woolly World stands as a fine addition to the 3DS’ increasingly stellar library and a technically impressive port of the fantastic Wii U original.

Sure, the visuals don’t have the same clarity and the wool isn’t quite as tactile as it appears on the Wii U, but for the most part, this is a great looking game, one which benefits from some brilliant use of the 3DS’ often overlooked 3D capabilities. It’s easy to label 3D as a forgotten or failed technology (well, outside of the cinema anyway), but when done right, 3D can still be hugely effective, and like much of Nintendo’s first party output, the 3D here is good enough to remind you why it was a thing in the first place. 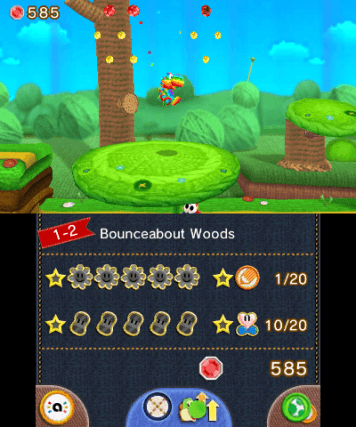 As technically impressive as it might be though, like the original, it is ultimately the art design that will make this a largely timeless experience. It’s just so……it’s just so damn adorable. From Yoshi’s little woollen propellers spinning away when he flutter jumps to the way that he transforms into a woollen mallet when you ground pound, it’s the little visual flourishes and moments of subtle, playful genius that ultimately make all the difference.

Despite the visual flourishes, at its core, Poochy and Yoshi’s Woolly World will be instantly familiar to anyone who played Yoshi’s Island, and while it’s true that the series hasn’t moved on a great deal since the 1995 original, those core mechanics feel as good today as they did back in the 90s. Eating enemies and turning them into eggs is as fun as it ever was while new additions such as the vehicular themed mini-games and the ability to knit together new routes or unthread existing elements of the world all prove very welcome additions. Yes, while none of these additions reinvent the wheel in any meaningful way, they all improve on what was an already very strong template.

The mini-games are relatively throwaway, but these breaks form the standard platforming gameplay prove pleasant and largely enjoyable diversions. They feel more Kirby than Yoshi if truth be told, but in practice, they are a successful addition to the core mechanics of the series and a brilliant excuse to do something a little different with the character while making the most of the wool-based aesthetic. 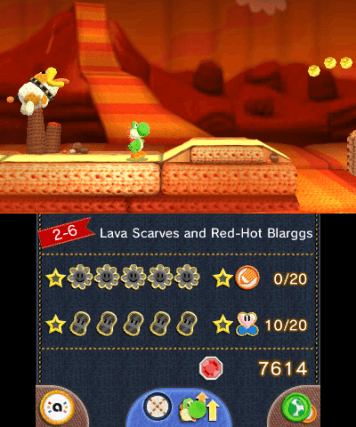 As fun as these might be though, it’s the collecting aspect of the experience that is likely to have players hooked in the long run. Getting through the game is easy enough (especially with the addition of Poochy and his puppies who can help make life even easier when playing on the aptly named, ‘easy mode’), but things soon become more challenging once you start making your way through the games’ ample selection of collectibles. It’s hardly elite level stuff, but if you want to achieve 100% completion, you’re going to have to put in a fair bit of work.

It might not improve upon the Wii U version beyond some Poochy-themed endless runner stages and the aforementioned easy mode, but for those who missed out on the excellent original, this proves a technically impressive port and a fantastic handheld platformer in its own right. It inevitably lacks the visual fidelity of its home console counterpart, but this is an undeniably gorgeous looking game which makes great use of the platform’s 3D capabilities. Yes, finishing the game is unlikely to challenge seasoned gamers and the loss of co-op is a bit of a downer, but the chase for collectibles remains hugely addictive and the mechanics as magical as ever.