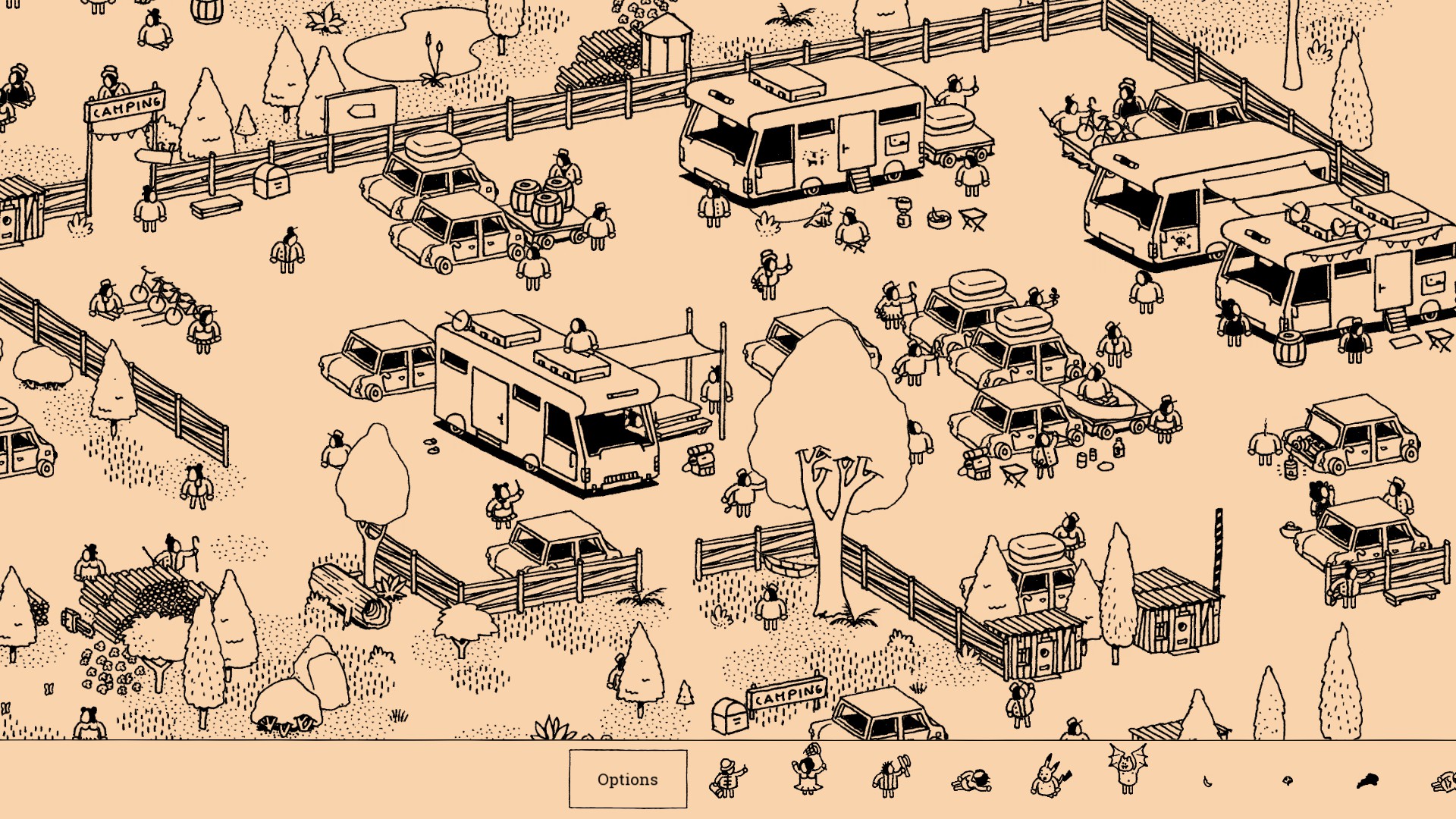 Hidden Folks takes the hidden object genre to the next level. It borrows the classics gameplay and appearance of a childhood seek-and-find, like Where’s Waldo, and improves upon it, adding in moving parts, mini-game interludes, and sound effects that function not only as a charming atmosphere setter, but also intuitive hints to where certain objects are located. Did I mention that they are all man (or woman)-made? You can hear a few of my favourites in the video below.

If you don’t know how to play a seek-and-find then I’m not entirely sure how, but you must have skipped right over your childhood years and were born as an adult. Jokes aside, the name of the game is self-explanatory: you are given a list of objects, ranging from animals to pickup trucks, and you have to spot them amongst a smattering of other people and objects that form an interactive scene.

That sounds simple enough, but the task becomes akin to finding the metaphorical needle in the haystack due to large, detailed scenes that are chock full of objects. Your list features hints that will allow you to (hopefully) pinpoint the location of a critter, object, or person. 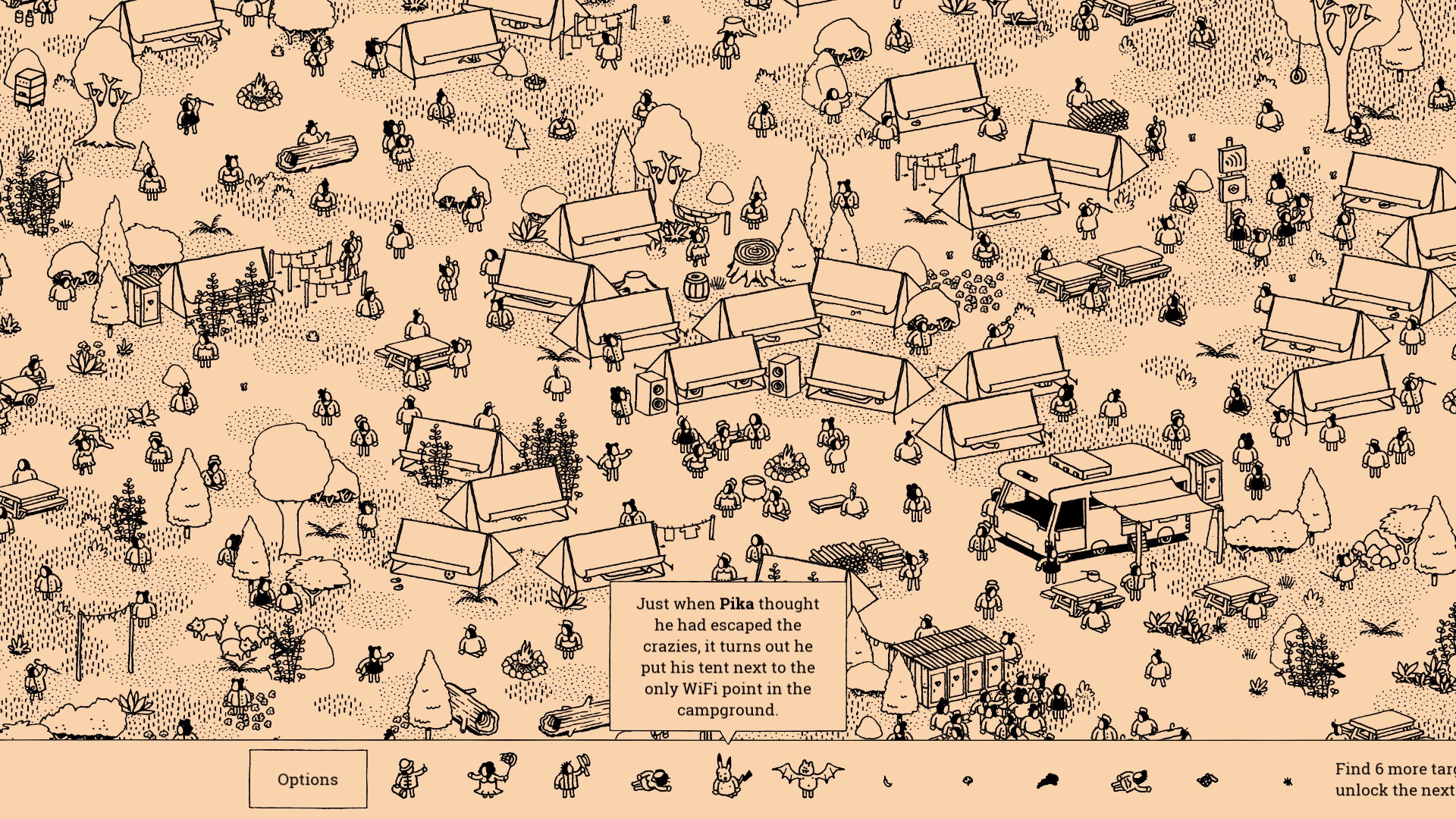 Once you’ve found an object, you click on it and it is checked off of your list. You can also use the mouse to click and drag so that you can pan around the scene or alternatively you can use your WASD keys. The game also allows you to choose between a sepia and a night mode so that you can ease the strain on your eyes, which is a thoughtful option setting.

The game is divided into four thematic sections, each of which has its own theme: forest, dry lands, city, and factory. In each, you can find objects that you’d associate with the setting ; in the forest, you’ll find lush trees, monkeys and pandas, farm land with the appropriate animals, and camping grounds with RVs and people aplenty—and so on and so forth.

While the completely of the sheer number of stuff jammed into each scene is impressive, the organization of those scenes is doubly so, zooming out and viewing the scene as a whole may be a little daunting, but you’ll soon notice groupings of stuff that makes sense thematically. I’m not sure how, but Hidden Folks manages to avoid appearing cluttered. The game allows you to zoom in and take the scene in a bit at a time, which is not an invaluable search tool, it allows you to truly appreciate the little touches; the loving attention to detail.

Where Hidden Folks really shines is its atmosphere. From the constant chatter of monkeys in the first stages to the purr of car engines in the city levels, every single sound in this game comes from the mouth of an actual person. The thought alone made me giggle when clicking on an alligator and hearing it roar, which happened to be one of my favourite sound effects. These non-invasive utterances not only set the atmosphere, they also act as auditory cues that help you find what you’re looking for amidst the scores of other objects. The vast majority of objects you interact with have their own sounds and they also react to your clicks; bushes get cut down, fixed objects that obscure the hidden folk behind them can be moved aside, and birds will scatter. These neat little touches make the time spent diligently searching worthwhile.

For those of you who are hungry for more, there are an additional three levels in the works and they will be available for free to anyone who owns the game.

Hidden Folks takes a very classic style of gameplay and adds a creative spin that improves it in every way. There’s a lot to like here for gamers of all skill levels, though I think those who have a preference for puzzle games will really appreciate the finer details of the hint system and cues created by sounds. This is a game for players of all ages and a charming addition to anyone’s library.