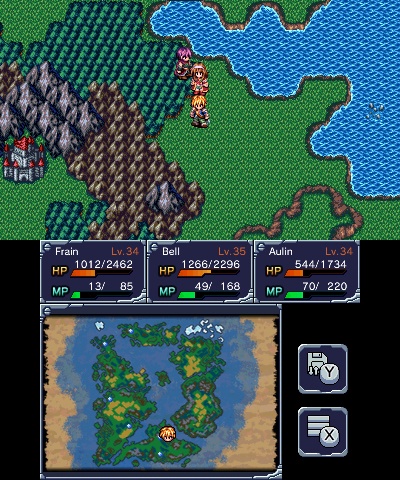 My first two-hour stint in Kemco’s new JRPG Machine Knight left me with a lukewarm first impression due to overtly long dialogues and little game-play. When I picked up the game later that day again I was pleasantly surprised what this mobile port had in store for me for the next 13 hours or so.

Machine Knight’s story follows Frain, a young lab worker, who is being send out to solve his world’s energy crisis. He is using an interdimensional gate to visit a different, medieval world, only to discover that betrayal and hardship follows him wherever he goes. Frain soon finds himself on a mission to retrieve the four soulstones that have been apprehended by an all too familiar force. He quickly makes two new allies, who will join him on his adventure: Bell, a young priestess and Aulin, a wise cracking girl of the people. This will be your party throughout the game, which is a bit of a shame as rotating party members is a standard in JRPGs and is used by developers to force the player to rethink their approach to battle situations. When I was around level 30 (level cap is 99) my battles became quite monotonous as I had figured out the most effective way to deal damage to my foes.

The mission structure is very linear with every now and then side-quests (requests from NPCs) popping up, which will send you all over the world map to either find an object or person. Upon completion they offer SP and in-game currency. It is up to you if you want to complete the requests as they don’t add anything to the main story and don’t have to be pursued. 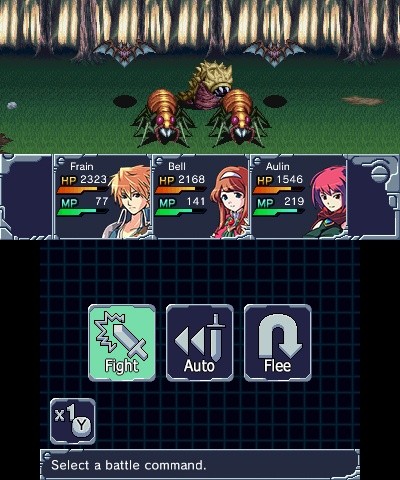 What really bothered me while progressing in the main story-line were hilariously long dialogues. Mission NPCs will discuss with you what’s next but not without Bell and Aulin bickering and subliminally having a hen fight over you. The few meaningful exchanges that tackle sexism or the hardships of war are being spoiled by the fact that you just want to skim through the dialogue to get on with the action.

Machine Knight’s game-play is Kemco’s way of not trying to reinvent the wheel when it comes to JRPGs by maintaining familiar tropes. The battle system is solid and conventional: Your characters can use standard attacks or skilled attacks which you can upgrade by spending skill points (SP). You are also able to upgrade your class to get more skill slots and the use of different varieties of soulpebbles, which you find throughout the game, can further enhance your skilled attacks. One handy aspect of the battle mechanic is the speed up function, which speeds up the action on the battle screen up to three times of normal speed. Every castle has got standard RPG amenities such as weapons and items shops, an inn and a blacksmith. The latter will enhance your gear in exchange for money and materials.

Presentation wise Kemco did a decent job with Machine Knight. From smooth in-game animations to hand drawn character portraits the game looks and feels like a classic JRPG from the 90s. Towns and castles look different from one another and are recognizable even though the NPCs could have used a bit more variation. Creature design doesn’t necessarily stand out but gets the job done. Within 5 hours of play time you will have encountered most of the enemy types and by then they mostly differ in colour palettes. That is not necessarily a bad thing as it is quite common in these types of games. Dungeon design is pretty decent and offers quite a bit of variation if you keep in mind that this is a low budged mobile port. Machine Knight makes use of the bottom screen by displaying a map and the HP and MP of your party which is useful. The game does not support the 3DS’ autostereoscopic 3D effect. 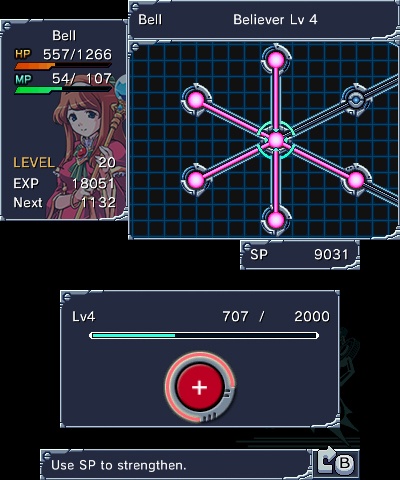 I was not very impressed with the variety of music in Machine Knight. Towns, dungeons, the battle screen and the over-world have all different music but it is getting quickly repetitive. After around three hours in the game you’ve heard them all.

I can say that for a mobile port Machine Knight never felt like a drag to play and at times I was really invested in the story line. Yes, there where moments I wished for the characters to shut up or for more than just a palette change in creature design, but a solid battle system and a not too shabby story kept on reeling me back into this world. With it’s around fifteen hours of playtime, Machine Knight did not put up much of a challenge in its normal difficulty mode and I can recommend playing this game if you are new to JRPGs or just don’t have time for a 100+ hours monolith.