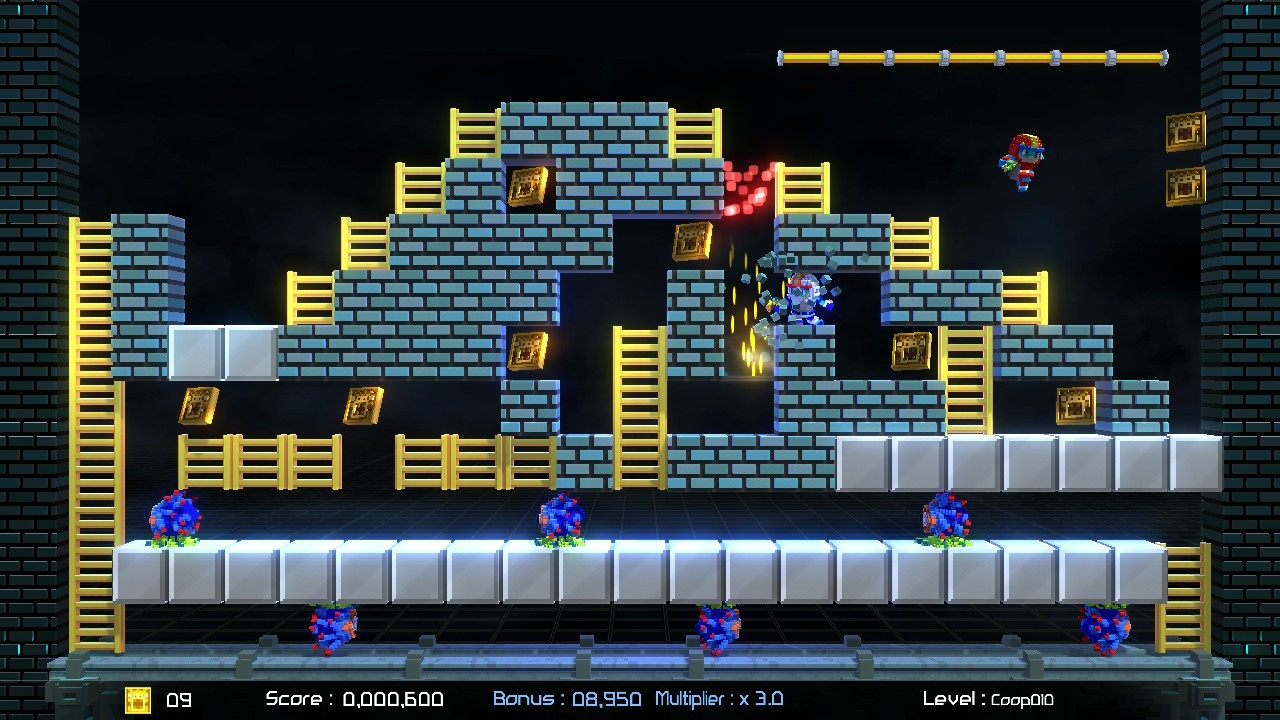 Lode Runner is one of those games that should be somewhere in a Hall of Fame, not just for what it did as a title but what it presented in concept. Roughly 36 years old, Lode Runner has existed across more platforms than most people have played and has always stayed true to its core: collect gold, don’t die. Enemies reacted to the player in a dynamic way instead of static movement (though not even close to the complex AI that exists in most games nowadays). And the level editor was one of, if not the first, that gamers had seen, putting the power of creation in their hands. It’s a monumental title, to be sure, and it still holds up with the latest entry, Lode Runner Legacy.

The plot of Lode Runner hasn’t changed since the creation in 1983, and it’s the same kind of plot that you’d imagine from a game that premiered on the Apple II. There’s an evil empire that’s evil because it’s dark and it employs monsters as helpers. You, the Lode Runner, have to break into the different levels of the castle, steal as much gold as you can, and then exit without accidentally being killed in the process. You cannot jump, but you have the special ability to break some types of flooring directly to your left or right, and you don’t die from fall damage. Use your brain, reflexes and sheer dumb luck to survive the fifty levels of insanity and…I dunno, get prizes? It’s an old school game, we don’t really think about the deeper morality of it all.

Right out the gate, Lode Runner is unapologetic in the core mechanics and ideas staying true. You’ll want to jump, and you can’t. It’s a 2D, platform puzzler that will not accept failure and will actively punish you for being terrible. The first couple of levels are immensely easy, as the five initial stages act as a tutorial. You’ll learn that you can break bricks, bricks regenerate, and you die if you’re standing where bricks are when they regenerate. There are enemies who will kill you if they touch you, but you can walk on their heads safely if you get them in a pit. And the gold is always the most important things, but you gotta collect it purely. That is, you can’t just lean over and touch it from a ladder. If some gold seems hard to reach, that’s because you have to make a complex, inconvenient hole and fall through it to get the gold. And that’s how the game wants it to be. And you’ll love it. 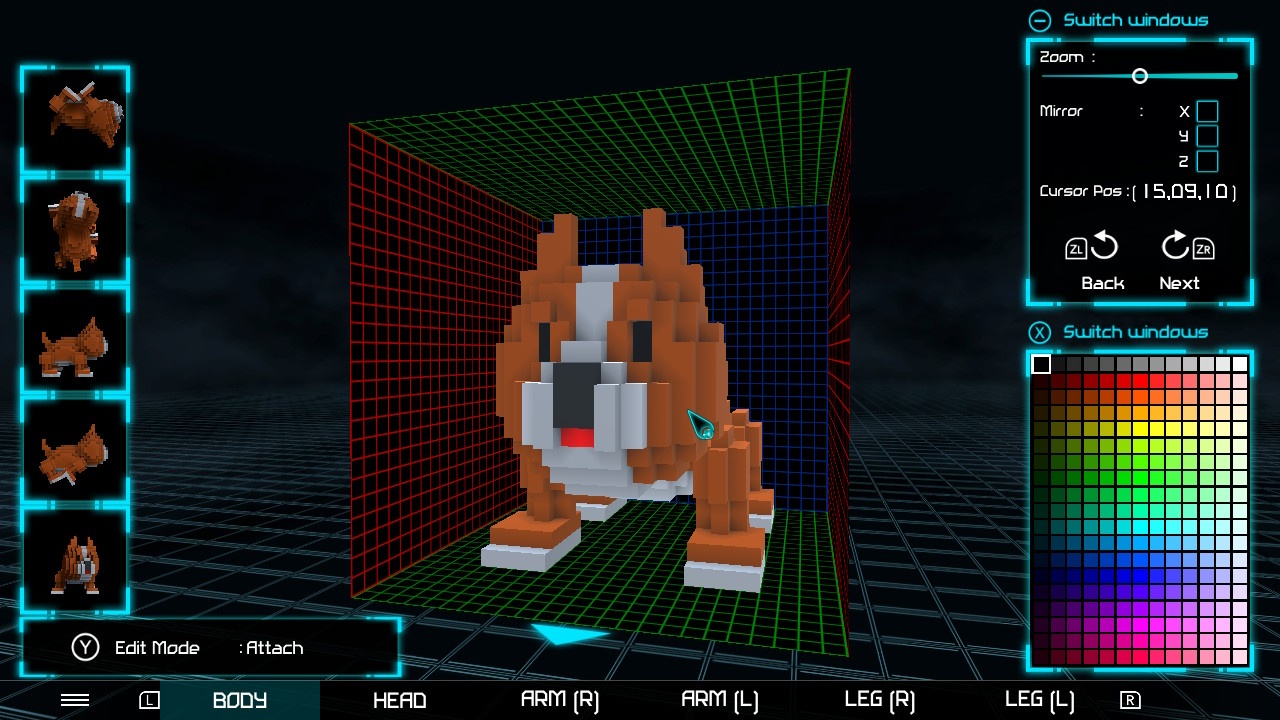 The execution of Lode Runner Legacy is so pure in essence that it’s hard to be frustrated when you don’t get a sequence correct in Adventure mode (the primary game mode). You are told that you can dig left or right: straight down isn’t going to work. So when you get the bright idea to make a hole with no wiggle room and drop into it, you have no one to blame but yourself.  You know enemies are going to kill you if they touch you, so why would you box yourself in? Interestingly, the enemies can and will be killed if the bricks regenerate, but they’re able to climb out of holes after a short period of time, so the game also asks you not to rest on your laurels. Starting with simple walking mobs, you quickly work your way up to ceiling runners, who care not for gravity or your safety. Everything works against you in an effort to ruin your score, which is always your primary goal.

This is the one caveat of adventure mode that I found both interesting and kind of incredulous. You fight against the timer and your own score multiplier in order to get the perfect score (three stars for no death and a good score, two for no death, one for simply finishing). But you are, in no way, penalized for “restarting” the level. The difference is, if you die and move forward, the gold you collected stays vanished. But, if you restart, the gold respawns, meaning you have to collect it again. But if you’ve carefully mapped out the route you want to take, dying just means working out the kinks for your perfect run, and then executing it with “no deaths” for the ultimate score. For a game that’s so rooted in oldschool ideas, the fact that you could simply declare a mulligan and try again almost felt unfair to the creators. Not complaining: I made a lot of mistakes and would prefer to sweep them under the rug and pretend I’m simply awesome. Also, it’s not as easy as it seems: a lot of the levels do rely on waiting for that perfect moment to do certain movements, so even restarting still embeds you in the “hurry up and wait” mentality to maximize score multipliers.

Now, extra mode of Lode Runner Legacy is where the modern ideas really get a chance to shine. The inclusion of new enemies and ideas are a bold attempt from the current team (Tozai Games) to bake some of the better designs and ideas that have come about from the last few years into a whole new package. These are loaded with a lot of clever designs and better concepts that are enticing if you burned through the original Adventure mode (incidentally, the only way to play Extra is to finish Adventure). And if you really feel like you need a challenge, Lode Runner Legacy is packed with even more modes that help give the full value of your investment. 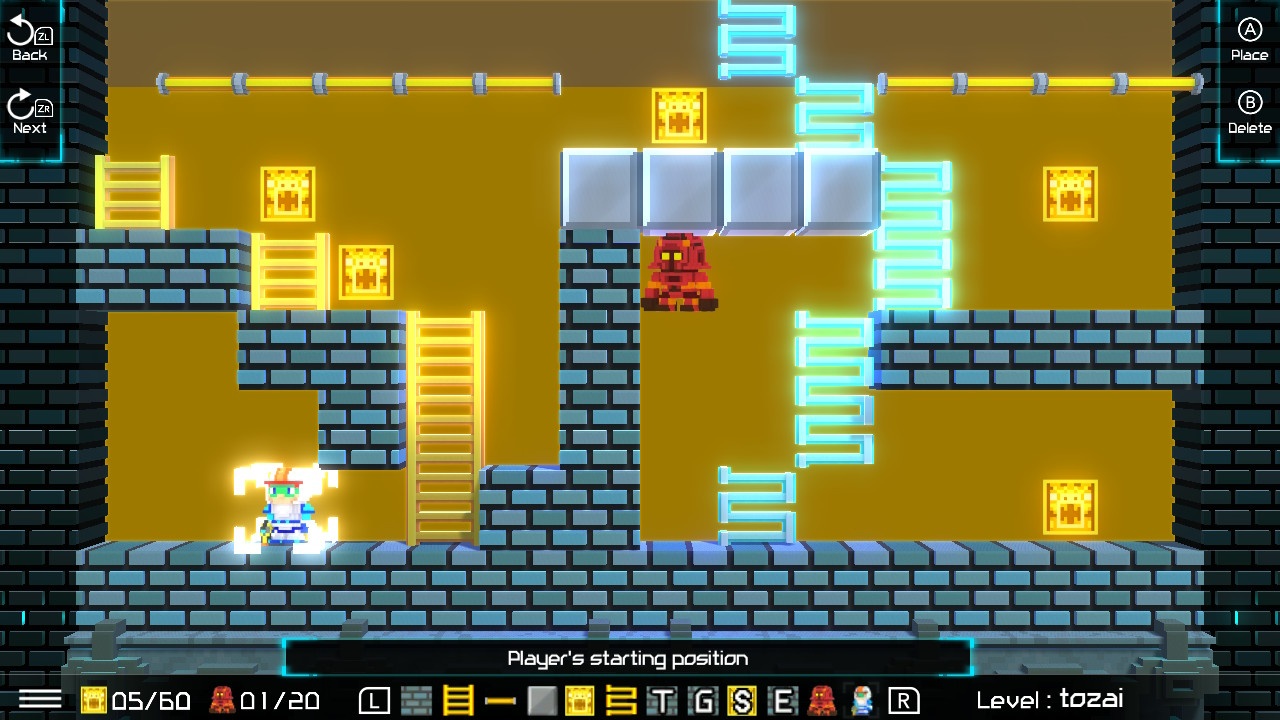 The Puzzle mode is kind of a giant pain in the ass, but definitely worthwhile for Lode Runner enthusiasts. Basically put, this is a “straightforward” setup that’s enemy free, but requires you to get the gold as fast as possible. To put things into perspective, I did the very first puzzle and got two stars because it took me ten seconds to finish it. I re-evaluated, ran it again, and shaved it down to eight seconds. Still only two stars. This mode encourages you to go absolutely balls out with your reflexes and timing in order to get things done properly, and it’s borderline stressful for players who like to relax with puzzle games. This is not relaxing, but it does serve as an important training tool for folk who want to master the other game modes.

Classic Mode is exactly what it sounds like: a modern port of the original version of the game. Fun for historians, and runs a ton better than it ever did on the clunker PC that I had to use at my grandparents house. The graphics are certainly wildly improved as well, with a spiffy 2.5D take on a title that was basically white pixels versus red pixels in the heyday. Worth a look and a play, especially when you compare the light and fun level one of Adventure Mode to the “holy shit I’m gonna die” first level of classic.

Lastly, there is the creation of it all. You can eventually do your own crafting in Lode Runner Legacy, and you’re allowed to make your own levels, but also character sprites and even items to pick up. Tired of always grabbing gold? Sacks of hamburgers is more my speed! Lode Runner looking kind of hokey? Use some of the inspiration of Slayaway Camp and make a truly terrifying spelunker. Additionally, if you’re more of a consumer, the World Levels setting is a bit of a misnomer: you can also download characters and items made by others on top of user made stages. I simply adore seeing what people make in their downtime, and the dedication to turning the gold into the original Mario coin, or a surprisingly well done Sonic runner, is borderline inspirational.

All in all, Lode Runner Legacy feels right at home on the Switch, and that should come as no surprise. As a granddaddy of gaming itself, Nintendo welcomes the OGs and the classics to the new frontier, and the incentive to do things portably is always a welcome sway. If you’ve got an itch for some well done, well scored and surprisingly versatile gameplay, then you’re in the right neighborhood. Now excuse me: I’m gonna have Quote from Cave Story collect a bunch of tiny Nintendo Switches.