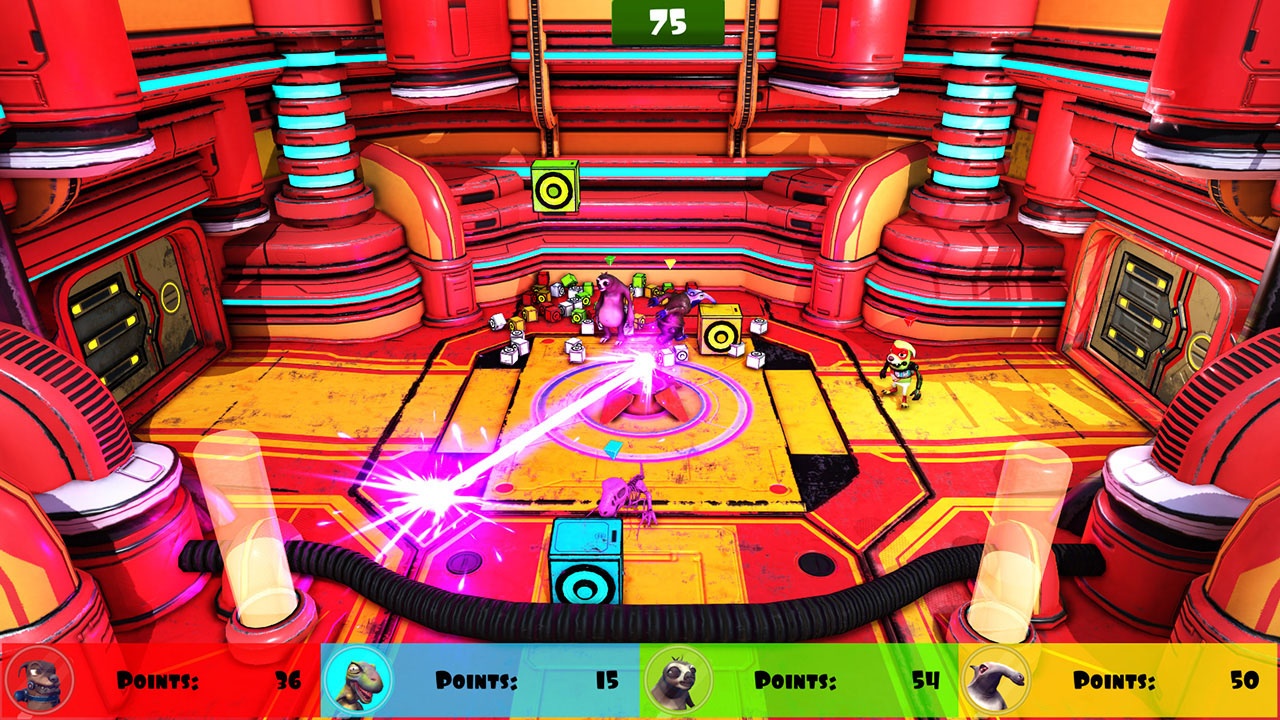 What’s up with animals and bizarre competitions? It was seriously just a couple of days ago that I took a swing with Sausage Sports Club to see elongated dogs and sharks play paintball, and it’s not even like that was the first swing at things. Animal Super Squad was more puzzling than anything else, but still weird. Then we have things like Astro Bear Party, Brawlout and A Night in the Woods for even more animal activities (though I would argue the last title certainly stands apart). Now I’ve got another animal title on my plate, and this one…tastes funny.

Animal Rivals is a one to four player party game type menagerie of several loosely connected group games that equal an overall 10-20 minute activity. Taking the helm of one of several upright animals, it’s up to you to meet the parameters of each game that you get involved with, be it to collect a bunch of things, break a bunch of things or be faster than the other characters. The champion gets points, the losers get shamed and…that’s really about it. You can eventually unlock some additional costumes for each of the animals, as well as palette swaps for new colors and skins, and that comes from the utterly baffling arcade mode. But let’s not get ahead of ourselves: let’s take a look at the game.

First and foremost, Animal Rivals has some truly oddball activities within it, and they only get stranger the longer you play them. All are divided into four categories: Collector, Catcher, Runner and Destroyer. Collector requires you to simply get a matching item from a collection of other things and bring it back: first to twelve wins, or whoever has the most after the time runs out. Runner is, well, running games: powerups can speed you up or slow you down (though, to be fair, these powerups appear in other modes as well). Destroyer wants you to smash things, usually boxes, of the same color as your team to get points. And Catcher asks that you catch items flying through the air, such as same color cannonballs. It’s very clear that these concepts work best on the first level they were intended for: collecting fruit from a far spinning table, okay, and it works with the animal motif. But then a later collector level is getting boxes with similar patterns from an abandoned warehouse somewhere. Appropriately sinister and nonsensical, interesting! And catching cannonballs out on a castle parapet is strange but at least makes sense. Then, when you’re literally inside a computer, standing on the motherboard, running back and forth between fans, and still catching cannonballs, things just record scratch to a halt. 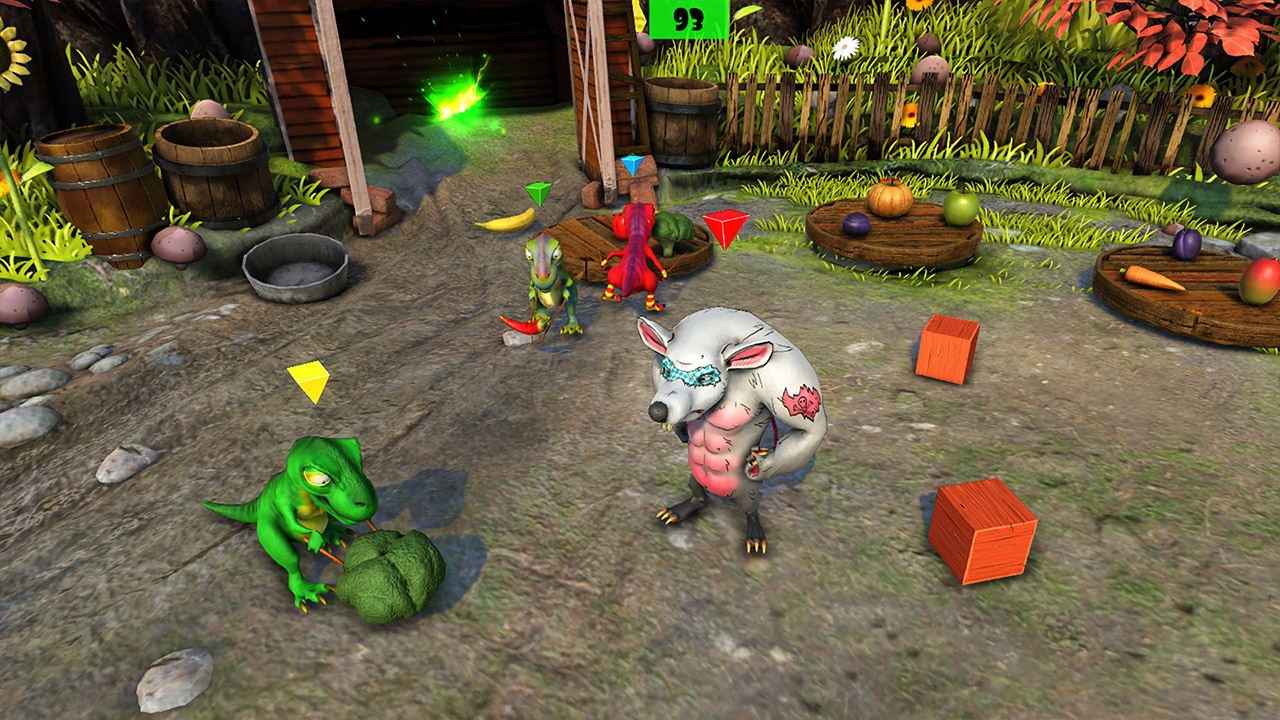 Now, this doesn’t make the games unfun: like all party games, this is one of those titles that can catch fire under the right circumstances. For example, the arcade mode is focused around one animal’s story, but you can still do it with two players, and that will allow for faster and easier unlocking of costumes and skins. Additionally, since the games are so short (but not too short(, you can bang out a couple of rounds of whatever you like best between commercial breaks of tv shows: hell, if you’re watching football, you can probably do three solid games and still make it back in time for the Jack in the Box bumper. But the problem is that you can’t just sell a game on “maybe:” you sell it on “this is what it does.” And Animal Rivals has some serious, visible shortcomings when it comes to “doing” instead of “hoping.”

Firstly, the characters are god awful ugly. I think this is purposely supposed to be the antithesis of all the overly cute and cartoony animals out there, and the result are these nightmarish, anthropomorphic things that look like they belong in the prison on Animal Farm. Gangly, dark characters really bring out the uncanny valley aspect, from the too-tall sloth to the cat, Leonidas, who looks like he’s supposed to play Piggy in an all feline Lord of the Flies. There’s a fair number of skins to swap out, but that doesn’t change their dimensions and leering proportions, and simply playing the game with them makes me uncomfortable, especially after just having the cute and upbeat Sports Sausage Club to set the tone just a few days ago.

Additionally, the games just become incredibly boring and wonky in the same swing. Every character shuffles and moves around like they’re being remote-controlled by the kid from INSIDE, but the kid can’t see them and the distance is just slightly too far, so things are choppy and blocky. You shamble to get different items, run into each other, and the kick animation is so fast and simple that it looks like your character just has some kind of noncommittal jerk of their body, as if to say “Sure, whatever.” If you kick another character, they then just hunch forward, either like they’re a powered down robot or a humiliated school child, and you stand there for a bit until the kick wears off. Meanwhile, the AI can go grab fruit, smash boxes or just go way ahead of you in the race, because they’re actually pretty on point in the normal difficulty. If you decide to set the higher difficulty for any of the games, the screen just gets chaotic, the AI even moreso, and suddenly you’re wondering if you shouldn’t be doing something else. 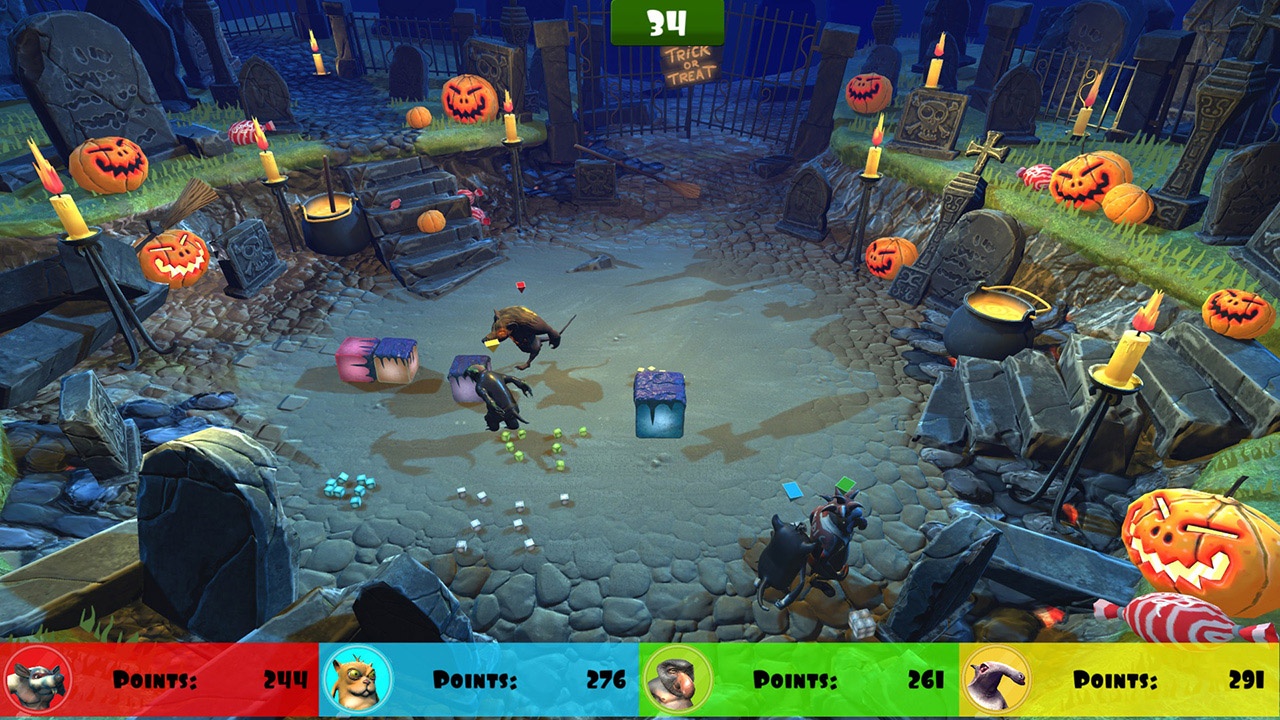 The kicker, though, is the fact that Animal Rivals actually runs exceedingly well on the Switch. In spite of the bland, irate menus and massive install size (how the hell is this thing 2 GB?), you can zip between games, load them up quickly, and watch the other characters get drawn into being in a split second. You give certain leeway when you see how the graphics are done, and I was honestly surprised by the speed that Animal Rivals can bring itself up. Which is why is such a crushing defeat that the game is just bland and boring. Fantastic, it’s optimized. Wonderful, it’s been ported to the Switch with care and didn’t crash. Amazing, it’s actually selling right now for less than half the Steam price, and will still be half when the sale is over. It’s still not fun.

Blue Sunset Games clearly saw the bad sales numbers and mixed reviews on Steam and thought they would strike it rich on the Switch, and maybe they will. As someone who regularly drops five bucks on movies that I’m never going to watch, it’s not impossible to conceive plenty of folk grabbing this for three, playing it for a couple of minutes, and shrugging, feeling that “eh, you get what you pay for.” And if you want a quickie, bizarre party game, I’m sure someone out there will have a blast with Animal Rivals. If it’s you, more power to you, but for me, I’m gonna get my kicks elsewhere.