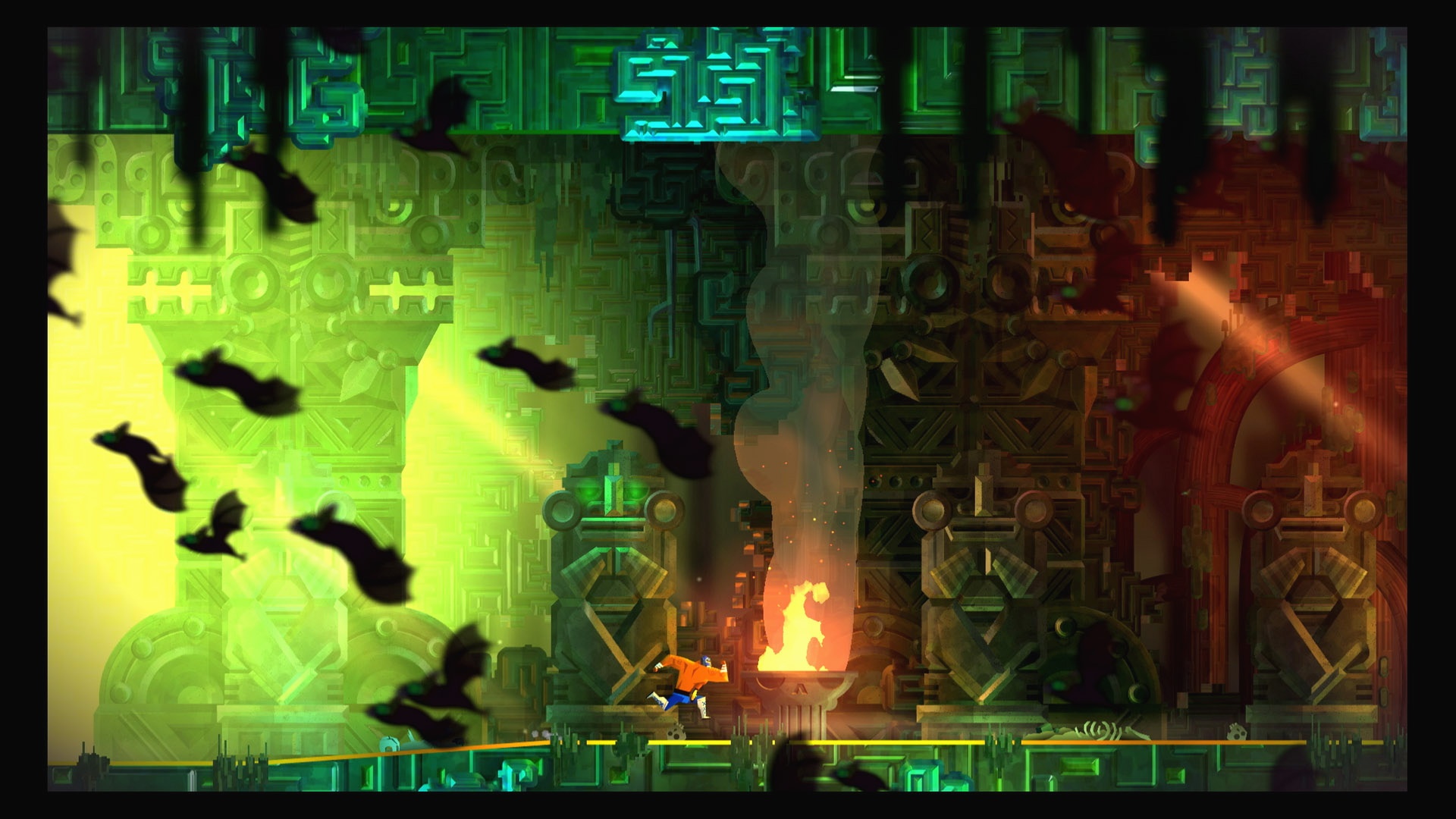 When we touched on Guacamelee 2 some time ago, I was fully aware there might be a chance that the DLC would, eventually, come to the Nintendo Switch. Then again, it’s a weird landscape for the Switch: developers are trying hard to help include them in all the wonderful patchwork that comes from PC gaming (updates, side missions, quick patches) without including all the extra nonsense (IAP, game breaking bugs, etc.). So Juicebox realized the best way to handle this is to add the best of both worlds. For fans who’ve already purchased Guacamelee 2, the DLC is now available in separate packages on the Switch, and, for newcomers, the Guacamelee 2 Complete Edition is the best opportunity to get everything in one spot for a small discount. Honestly, if you haven’t bought the game yet, I’d deeply consider the Complete Edition, because the additional content is pretty awesome.

The first big change is that the Three Enemigos DLC is finally available, giving fans of Jaguar Javier something to finally celebrate. The DLC allows three of the more memorable and charismatic villains (Javier, Uay Pek and El Muneco) to be costumes that you can interchange on the fly with the already available fighters. Each of the costumes, while hardly groundbreaking, does offer a bit of an incentive to trying out their abilities. For example, El Muneco takes advantage of the chicken form by allowing for faster healing, but has the drawback of healing much slower as a “human.” Uay Pek can actually leech life with his hits in the spirit world, but will take massive damage in the living world. And Javier has an ever-building damage multiplier that makes him an absolute beast when you successfully dodge roll attacks. On the other hand, you also end up decreasing drastically in damage when you fail a dodge, and the big boss himself, Salvador, will hit you ESPECIALLY hard when you face him, As you can see, the costumes are potentially strong if you can play with them strategically, but none of them are broken enough to make a playthrough too easy.

I enjoy the Enemigo’s costumes, as they add a very strong bit of flair for the entire game. Not only does it create new ways to approach the game and make certain areas more unbalanced or interesting, but it creates a new life of its own within the core gameplay. It won’t rewrite the entire storyline if you decide to play through as Javier, but there will be moments of changed dialogue from NPCS that hint that they’re aware something weird is going on (to say nothing of when you face…yourself in combat). More importantly (and, again, Nintendo, please), this also creates several new achievements to get, something that’s still localized in enjoyment but is still something that people strive to attain. Being able to be a master at something is what keeps modern video games enjoyable and replayable, and the trophies from each of the characters range from obvious and easy to more dedicated and intricate. Granted, if you’ve already put a ton of time into the game, you should be able to knock out all the achievements in less than an hour with know how and precision, but still, it’s fun to do. Additionally, playing the whole game through as Uay Pek is a sort of challenge unto itself and should denote an additional achievement for “Lucadoring Without A License.” 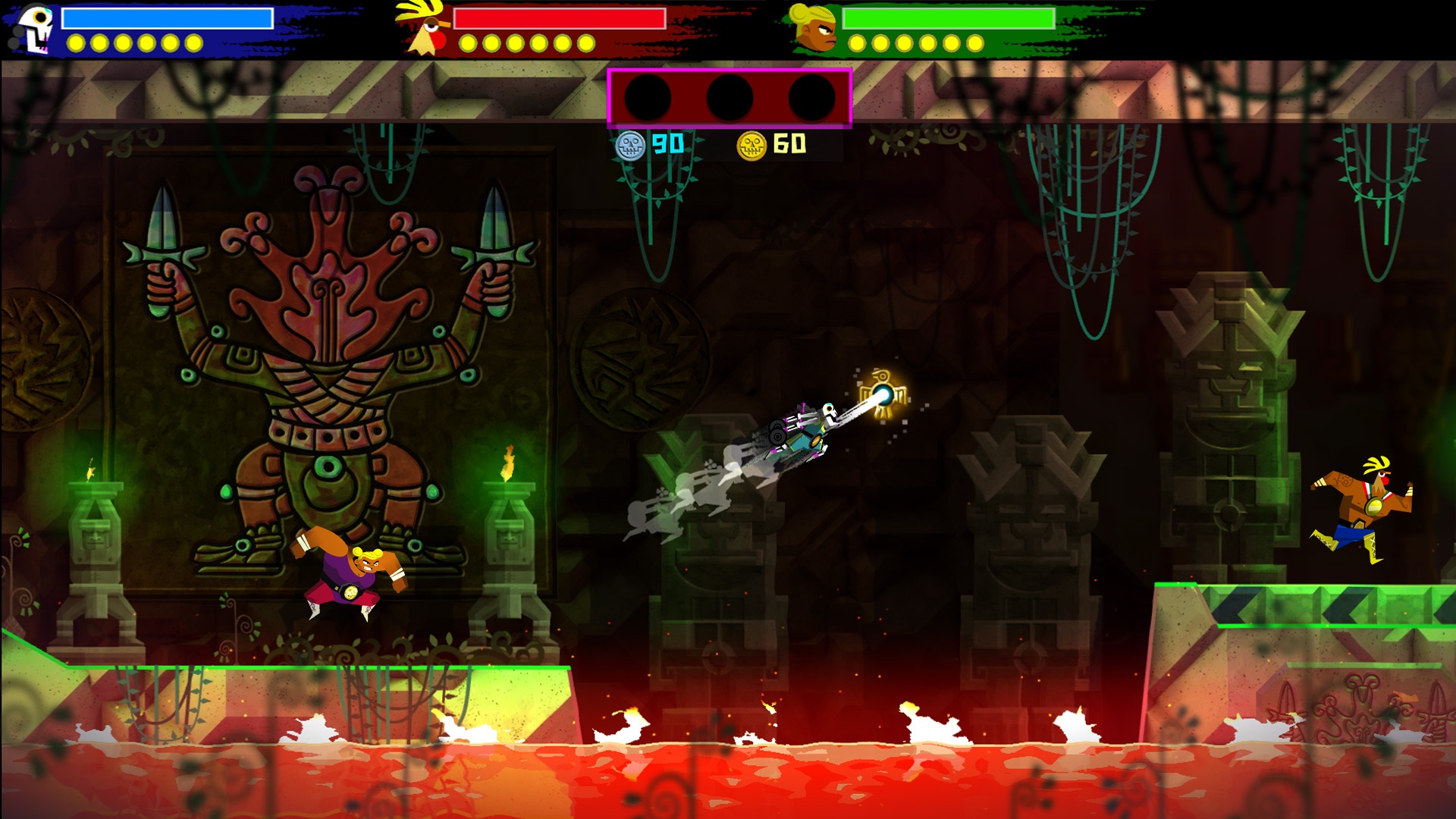 The second DLC is The Proving Grounds, and, hoo boy, this one is a doozy. The Proving Grounds are a set of challenges that exist in a temporal area set far apart from the main game and can technically be tried at any point during the game (as long as you can get there via the Badlands). Having said that, you sincerely, honestly, truly might want to play the whole damn game through before getting into the Proving Grounds, and that’s not because there are massive spoilers or anything waiting therein. The Proving Grounds will ask you to use every bit of skill, cunning and patience that you’ve developed throughout your play of Guacamelee 2 in order to complete them, which means asking you to do skills that you might have not unlocked if you haven’t played all the way to the end. Then again, maybe you can’t get here until you beat the game. I’m not sure: I wasn’t willing to delete my save game from my previous review just to get through this all over again, so take the entry there with a grain of salt. But here’s the truth about the Proving Grounds: it’s punishing.

A grand total of fifteen challenges await you in the Proving Grounds, and each one is a serious test of you being able to execute precision details with the utmost care. Take, for example, the very first challenge, which is simply a speed run with moving walls to get to the exit in the fastest time. This is the easiest by far, and has very few ways that you can screw this up, and it still took me at least three times before I got my timing down to Gold and satisfied everyone involved. And this was a challenge that asked two things: running and jumping. The utmost basic ideas that could be produced. From here, things just get disgusting, asking you to clear whole levels without touching the ground, destroying waves of enemies with only grapples and throws, taking out airborne enemies with only grapples and throws, THREE damn stages dedicated to being a chicken, and so much more. The far and away winner of the straight hell award has to be a toss up between keeping a single enemy alive and throwing/slamming him the length of the level and one where I needed to keep changing between the land of the living and the dead to prevent a skeleton from killing itself in a tiny death pod. These stages are no joke, and they take everything that I loved about Guacamelee 2 and turned it up to 11 on the “you’ve got to be kidding me” meter. Watching a friend actually accomplish some of the stages in record time filled me with awe and pure, hateful envy. 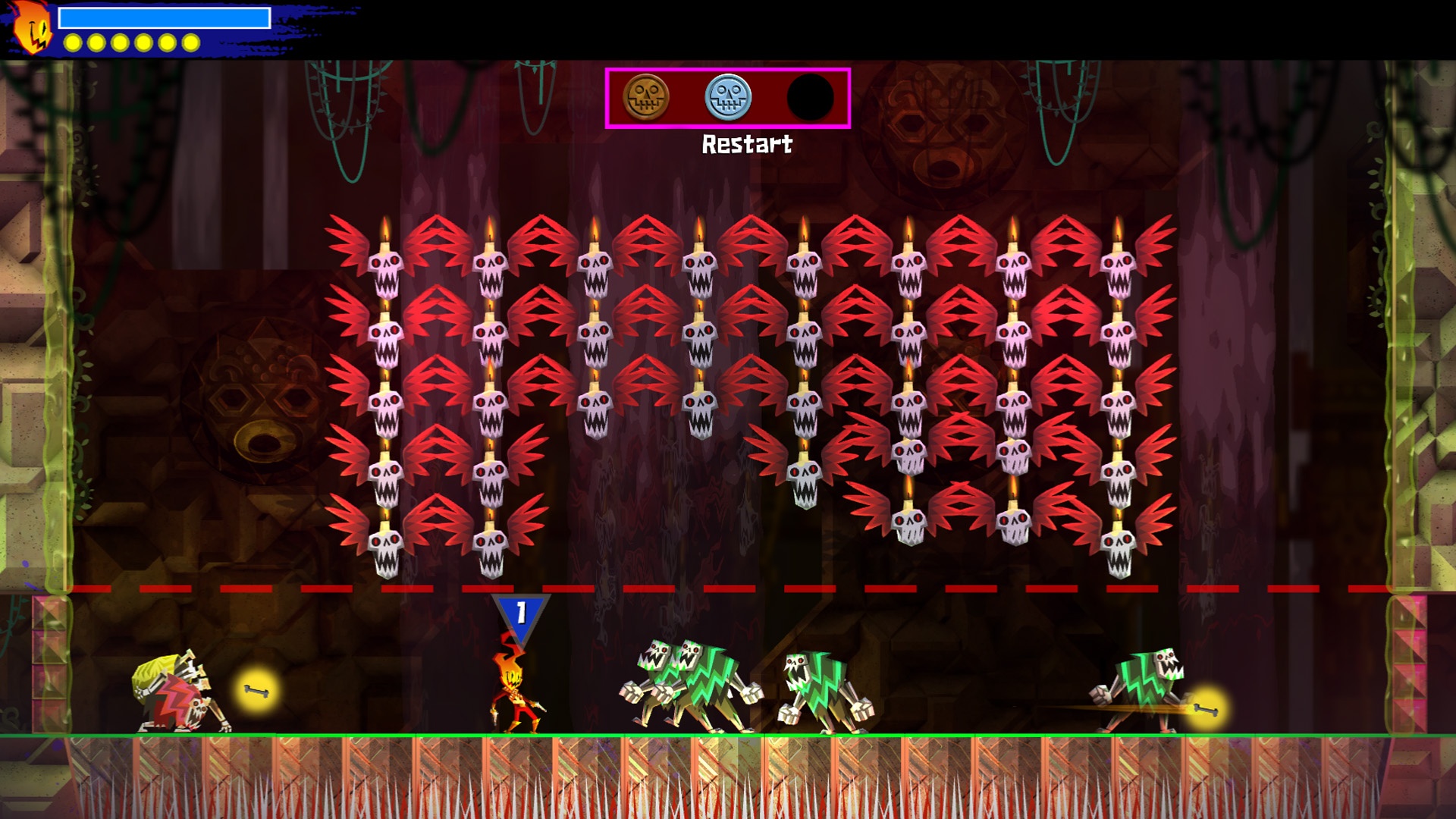 The Proving Grounds isn’t just about bragging rights, though. The unlockable costumes here total five, and each one adds a whole new dimension to the game. If you’re able to accomplish everything, you get the VERY confusing and unbelievably powerful Salvador costume, which is just the most fun you can have without hacking the game. The Proving Grounds, unlike the Enemigos DLC, offers a lot in terms of making the game unbalanced and fun with the costumes you can achieve, and it’s more than worthwhile for people who enjoy the game. That being said, this is far from a walk in the park. Each stage is crafted with love, absolute love of making people stressed out, and you’ll need to take several hours (or even days) so that you can decompress between stages and not accidentally start smoking again. Seriously, you’ve been warned, and newbies can’t even get to it right away, so don’t act like you wandered in here by accident. Still, the incentive to play Flame Face is way too good to pass up, so don’t act like you don’t want to try.

At the core, the Complete Edition of Guacamelee 2 holds all the same great visual effects, amazing music and fluidly fantastic gameplay of the vanilla edition, but with so much ready to go in terms of replay value. If you haven’t bought the game before, there is seriously no reason, on earth, why you wouldn’t want to pick up the Complete instead of the base. If you already own the base, my condolences, and get some eShop credit to pick up this DLC. The Proving Grounds is a no brainer for excited veterans, and, while you’re there, wouldn’t you just love to be Javier? Seriously, there’s an achievement called Moves Like Jaguar. You can’t pass that up.

This Complete Edition is the clear winner for new luchadors, offering cosmetic upgrades and a truly challenging bonus world with tantalizing rewards.