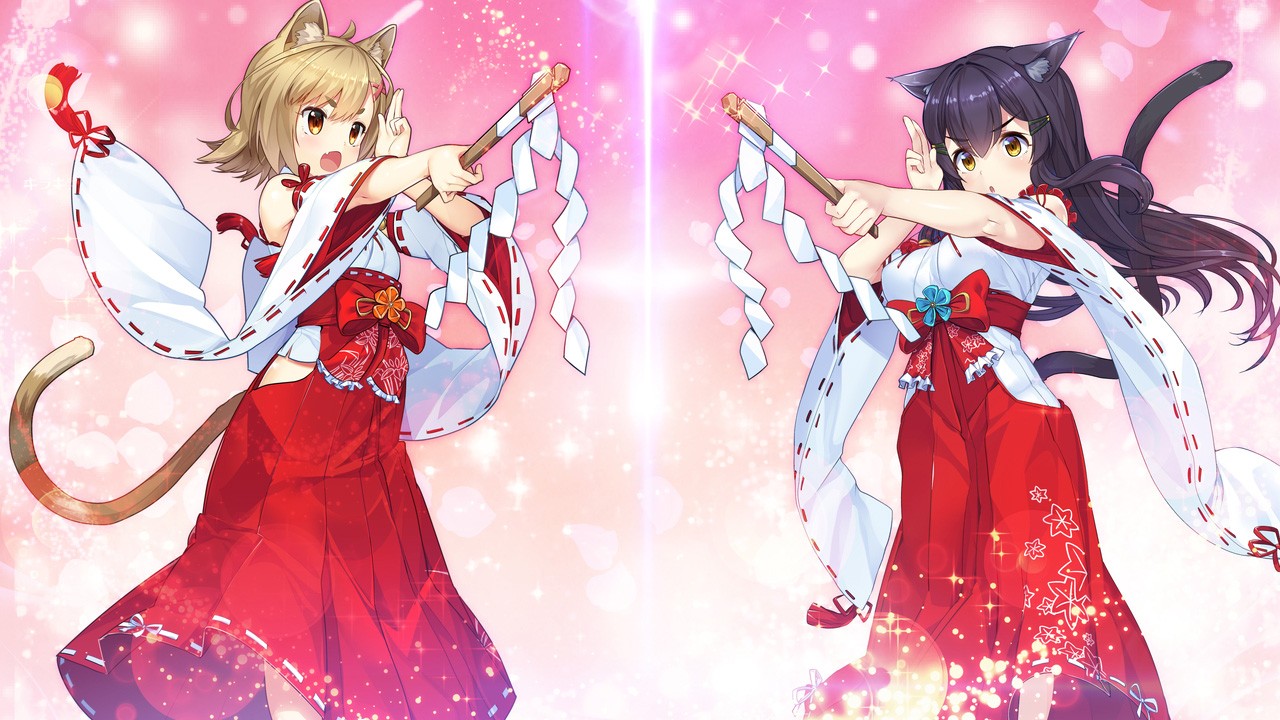 I’m not going to pretend that this game review is research or something ridiculous and paper thin like that: I enjoy visual novels, I enjoy cute anime girls, and I like insane premises that play out in totally tropic and utterly implausible fashions. But I will say that I have, legitimately, started to understand the cat girl thing. See, I didn’t totally get it, particularly in the heavy-handed cat spirit that NekoPara exhibited, where the girls were actually acting like cats a majority of the time. However, I think the idea of it is to have a character that is both human and inhuman in the same swing that’s appealing. So they’re human in that they have feeling and emotions, can vocalize and interact, and can express affection and their thoughts in a way that is very clean cut and relatable. But the cat aspect means that they tend to have almost stronger reactions to certain things, and look up to the human protagonist that’s more than just a normal romance, but almost a doting, pet-like thing. It sounds kind of gross to type it out, but that’s also why I can usually play these games once and then be done with it. This master/pet relationship made more sense in NekoPara because the world was shaped in such a way, but it gets more confusing within the confines of NekoMiko, a game from qureate that certainly ticks off some boxes for the ecchi VN fan, but also alienates those who are looking for something more “cute” than “sexy.”

Of course the story of NekoMiko is ridiculous, because why wouldn’t it be? You’re a down-on-his-luck dude who didn’t get the job, lost his girlfriend, and now feels like he’s cursed. You live in Akihabara, because we’re still trying to sell Akiba as this magical place even though it got taken over by corporations a little over a decade ago. So our dude (who you can name anything [and I named “Taco”]) happens upon this mystical shrine that’s like hundreds of years old. Turns out that the shrine was made back in the day and brought prosperity to the burgeoning city of Akihabara in days before maid cafes and, well, electricity. The inhabitants of the shrine are none other than Ayame and Kaede, two cat girl shrine maidens who wish to promote the happiness, prosperity and good fortune of the city and all who visit their shrine. As our protagonist, Taco, is the first visitor in a long time, they want to do their best to help him out. Their cleansing dance makes him feel a bit better, but it’s clear there’s more to be done, not only for him but also their own shrine (which is totally dilapidated). They resolve that both Ayame and Kaede must go live with Taco until everything is better for him, and they discover a lot about themselves, and this dude is going to try and get amorous with at least one cat girl, so buckle up, you know what’s coming. 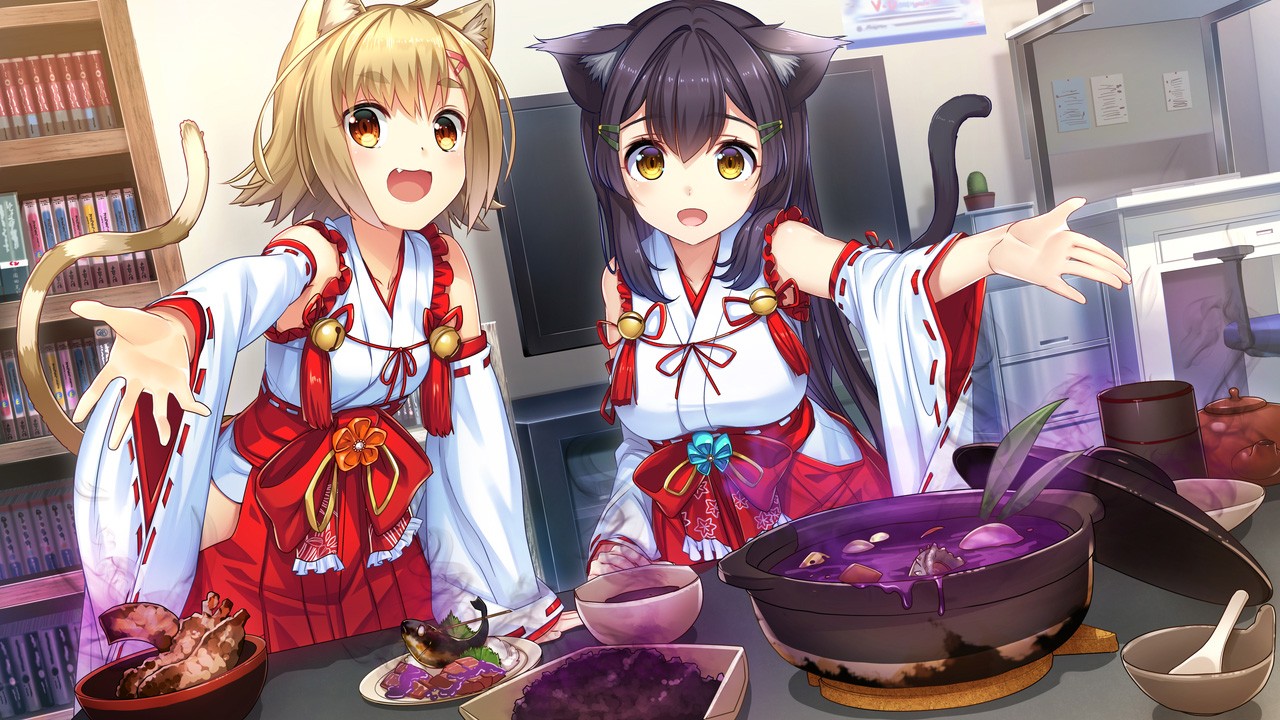 Let’s get a few big things out of the way first and foremost. Qureate, who has done a few VNs and definitely a couple cat girl games, promotes this game as an adult adventure, and there’s a free R18 patch on their website for Steam, so the sexual aspect of this game is very, very heavy handed. You literally wake up after the first encounter to being spooned by two cat girls in their underwear. Very awkward moment trying to play this on the train. The cat girls aren’t shy about their growing affection for you, and there’s even a typical shared shower scene that you get regardless of your choice branches beforehand. Nintendo and qureate decided to cover up nipples and genitals with carefully placed bubbles, but this is probably as close to the line as we can get without going over, so keep that in mind before grabbing this game. Yes, the characters are cute and so is the thumbnail, but this brief jaunt is very on the nose and doesn’t pull any punches. Again, kudos to Nintendo for being willing to go all the way with their game choices, but know what you’re doing before your teenage child says they want to get a Japanese visual novel game, and also can the Switch only stay in their room now.

There are a handful of choices within NekoMiko, but a lot of them are pretty obvious and straightforward, as the main idea is to a.) get a relationship going with one or both of the girls and b.) finish the game. Showing affection predominantly to one means that’s the one you end up with, and carefully balancing things along with one additional choice means you can get the full “true” harem ending. The whole game, front to back, can be played anywhere from 3 ½ hours to, I’m not exaggerating, 8 minutes. The latter is because I found out there’s a fast forward button that doesn’t care where you are or what you’re doing, but will FLY through the dialogue at the speed of light and only stop when you release the button or reach a branching path. Be sure to check the config before jumping into the game, because the buttons aren’t laid out very intuitively for saving, loading, dialogue log and, again, the crazy fast forward button. Once you unlock one of the scenes (like the group bath, or the different restaurant outfits), you can view those in the Extra menu to properly appreciate the art style.

Now, there’s a lot that I did like about NekoMiko. Firstly, the animation and the character style are fantastic. While the specific scene work that we see can sometimes be very heavy handed with perverse sexuality (we see so many panty shots), the way the two characters move as they talk and react in different expressions is really quite good. Take, for example, something like NekoPara, where Vanilla and Chocolat would slightly bob and move their heads a bit to mimic movement. Ayame and Kaede take this concept and bring it up to a whole new level with a lot of very natural, very believable gesticulation of their arms, shoulders, head, neck and facial expressions. I was actually surprised by how smoothly and cleanly the shrine maidens moved, and it almost seemed to showcase a technology that was far more advanced than I would have imagined for the game. This, combined with some really good voicework, gave a strong sense of personality to the two characters, even though it was a bit stereotypical (Ayame being the lighter, more careless one, and Kaede being more serious and a little shy). 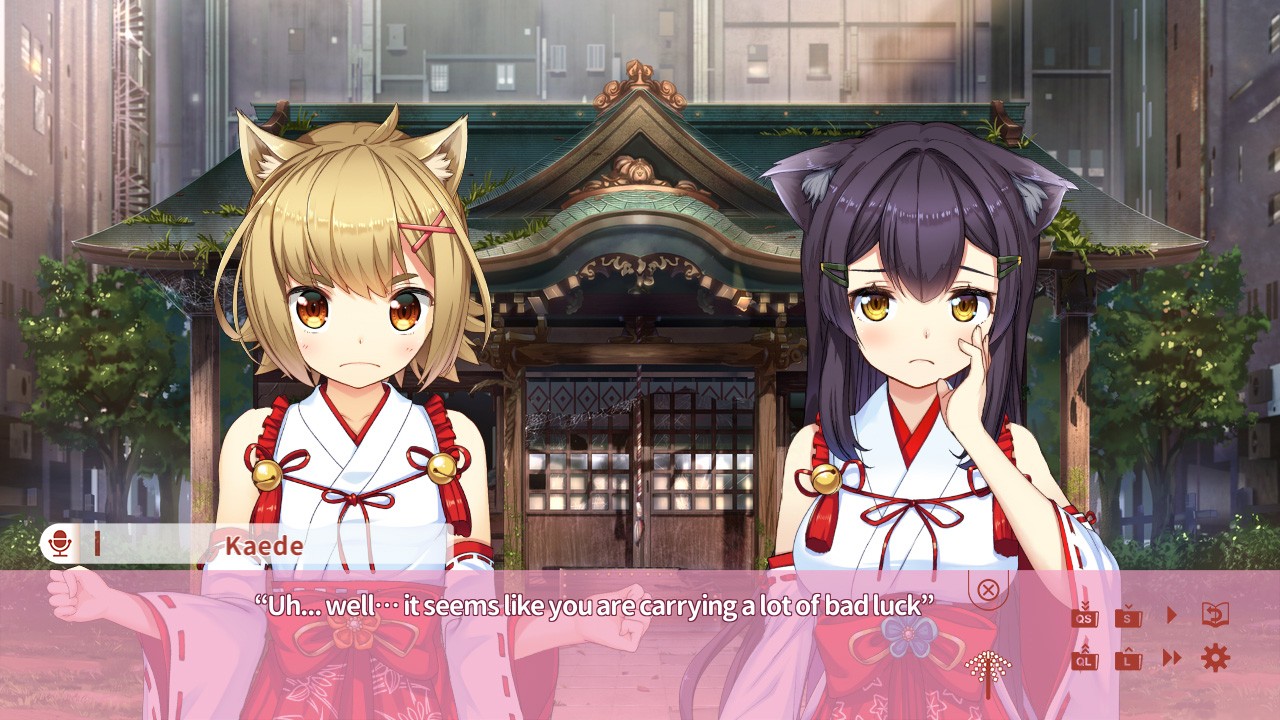 There are some issues with the translation to English of NekoMiko, but that almost feels like an aside to the overall effect. From the very beginning, you’ll notice something a tad off about a majority of the lines that the protagonist drops. It’s technically correct every time, but there’s an errant article, or an extra bit of conjunction, something that you could, theoretically, pepper into the sentence but really should because it comes across as wonky. The two shrine maidens are equally guilty of this, but it’s at least easier to ignore since they’re voiced and you can focus on the spoken Japanese instead. With our protagonist, since we’re supposed to align with him, the disjointed sense of the words can take you out of it pretty quickly. It’s, again, not terrible, but qureate could have benefited from someone battling cleanup and just modifying a few of the sentences here and there to make it as natural as possible.

When you boil everything down, here’s what you get: NekoMiko is a very short visual novel with a bit of replay value, great animation and area design, forgettable music, strong voice acting, and some scenes that remind you that the side function of this game is to be erotica. It’s cute, it’s purposely provocative, and it will certainly stick with me, which I suppose makes it memorable. There’s no reason to invest more than a few hours into the full tour of this whimsical world, but why not enjoy the short time you’re here? If you already are into getting cat girl games, if you own the other three NekoPara games and need something to tide you over till the next one releases, then you can’t go wrong with this very tongue in cheek jaunt.

Look, you know what this is gonna be, so either you’re in or out with this cat girl, shrine maiden harem dating game.