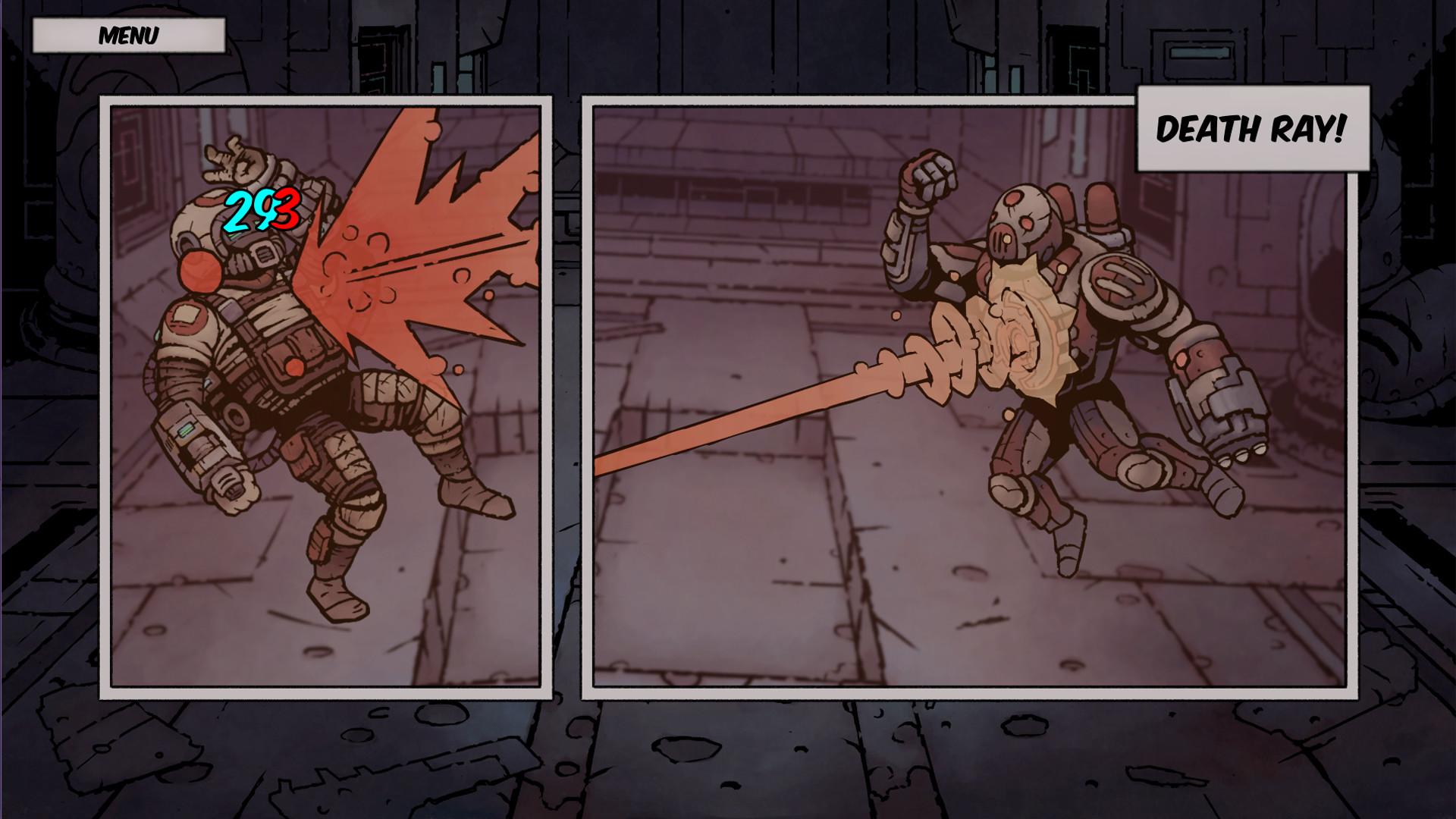 Humanity was never meant to stand still. Eventually, we need our space, even if it means going into another galaxy. Deep Sky Derelicts is an action-RPG game that rewards players for their curiosity, as well as their quick wit in combat. The choices you make will lead your team to victory or they will be a harsh reminder that you’re another lost away team that never returned.

Here’s a basic summary of the world of Deep Sky Derelicts: you’re a space mercenary working on a remote space station. While you take up residency in space, you’re also employed by the governor to raid specific derelict spaceships that are suspected to be abandoned or wiped out by enemy pirates or otherwise. You load up your gear, plot the course, pick the team, and you’re off on your mission. You’ll be meeting back at this space station HUB often, so get used to the layout. It is your base of operations to reload, turn in quests, take on new missions, get new gear, or heal up your squad.

Combat pays homage to the traditional turn-based RPGs of yesterday. You command a squad of three different classes and use their abilities to fight off various enemies that want you dead. Your goal is to grab your objective and making it out in one piece is considered a bonus.

A complement to the combat system of Deep Sky Derelicts is its usage of cards. Each card holds a specific ability, such as casting a shield bonus for an ally or dealing direct heavy damage to an enemy. During each turn, each side draws different ability cards and they can be used instead of the standard attack. These cards can be game changers, as they can give that critical hit when needed. Normally I don’t care for card based games, but this game used it effectively. Card variation was interesting enough to keep battles unpredictable. Additionally, you can gain new card bonuses after a battle or through exploring each ship.

An important factor of combat is the meta of classes. Your ragtag group of mercenaries all have roles to fulfil. There are five different classes. They are leader, tracker, bruiser, scrapper, and medic. Tracker and scrappers are special damage classes. Tracker does precision based damage to enemies, whereas scrappers create bombs to deal high damage per second to enemies when needed. Leader and medic are support classes, giving buffs or healing to the squad when needed, but they also have the capabilities of attacking as well. The bruiser is the heavy melee class that is handy when you’re wanting to get a solid melee bash on that unnecessary creeping robot following you around.

Each class draws their own strengths from specific traits: Weaponry, Tech, Medical, Scavenging, and Mental. For example, the medic class would have high tech and medical points, but would suffer in the weaponry category. Having a mix of classes is good to balance out the strengths as you venture off into the void.

A great thing about the combat that particularly stuck out to me was the battle sequences. When you start combat with the enemy, you’ll be treated to a graphic novel style cut scene, showing your character majestically dispatching their foes with justice. The visual style of the universe, characters, and environment of each spaceship accent an implied narrative, letting players piece together what happened.

The visuals of Deep Sky Derelicts reminds of a couple of influences. The ominous atmosphere of the Alien franchise seems to embody this game. It has that feeling of walking into a grand adventure, but revelling in the absolute terror when something stops you in your tracks. The other thing it reminds me of is this one graphic novel series called Robots vs. Zombies. The art style is a grotesque, yet gritty, apocalyptic space adventure, minus the zombies, but with things that want to hurt you. This may only interest a niche audience, but for the given premise, it can be appealing to those that like exploration based RPG games.

During my play through of Deep Sky Derelicts, it did give me a sense of loneliness. Yes, I did have my squad with me to go with until the end, but the entire idea of exploring an abandoned or long forgotten space ship is spooky. Despite the dreadful atmosphere, I was guided by my sense of wonder and exploration. Of course, the worst thing that can happen is your entire squad is wiped and no one reports what happened to you. Luckily, reloading a save is your best friend and save often.

The soundtrack of this game is another high point. It has the ambience of emptiness and wrapped with some mystery. As your explore the mysterious crypts of the forgotten floating tombs (or as we call them, spaceships), you can’t help but wonder what the story was behind each disaster. Was it an attack from an enemy force? Sickness? Something else? The more you explore, the more things you’ll uncover as your quest continues.

Because the story line is open, you can take on missions as you go and the soundtrack adjusts for each situation, from battles, looting through areas, and even meeting your sudden end if your entire crew is wiped out. 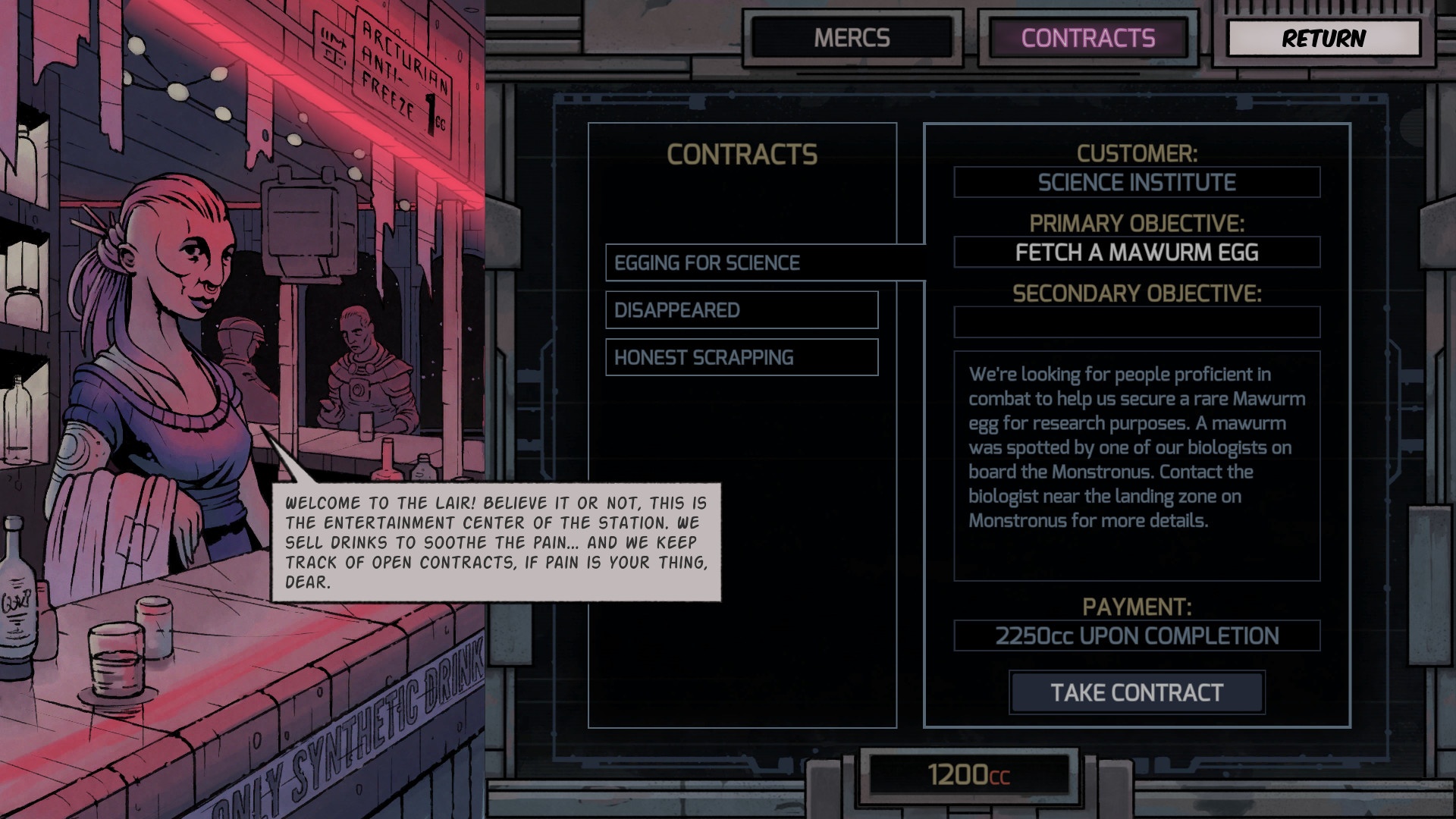 Deep Sky Derelicts had a wealth of great qualities and it’s difficult to list all the negatives. Do not think of these as negative traits of the game, but more as things the developer could improve upon in future updates. They could be considered as expansions as well.

The two particular things that I think could have been improved upon are things that can be easily fixed in a future patch. The first thing that I dealt with was the adjustment of the graphics settings. I had to run the game on 800×600 resolution in order for it not to chug my laptop down. This is not a problem for modern laptops, but for those that can’t upgrade yet, trial and error is your friend to figure out what will work best.

The last issue with the game is the tutorial. Beyond reaching out to Google, the game did embed mini tutorials within the game, but they didn’t explain much. I had to figure out on my own how to turn in quests for money or which weapon did best against what. Perhaps it was intentional from the developer to have the players learn to find the best way to handle things. If it was this, then I applaud them, but otherwise I found it irritating.

Overall, this game is the complete package for any RPG fan. It has a solid story that is easy to get into, endless missions you can take at your own pace, lots of exploration options on many ships, multiple enemies to fight, and skill trees different enough to make each character feel unique. Because of the procedural generated ships you explore and missions, the replayability is a selling point and is great for something light to play if you’re not sure what to visit today in your library.

I would recommend this game to anyone that wants a solid turn-based RPG game with stylized fight scenes and high replayability. The art style is what attracted it to me in the first place and it also fits in that same family of FTL or Into the Breach, with that desolate, but not quite hopeless setting. With minor tweaks to game play and a way to control the flow of tutorial tips, Deep Sky Derelicts could be a contender for an unknown gem for many gamers.

With minor tweaks to game play and a way to control the flow of tutorial tips, Deep Sky Derelicts could be a contender for an unknown gem for many gamers.