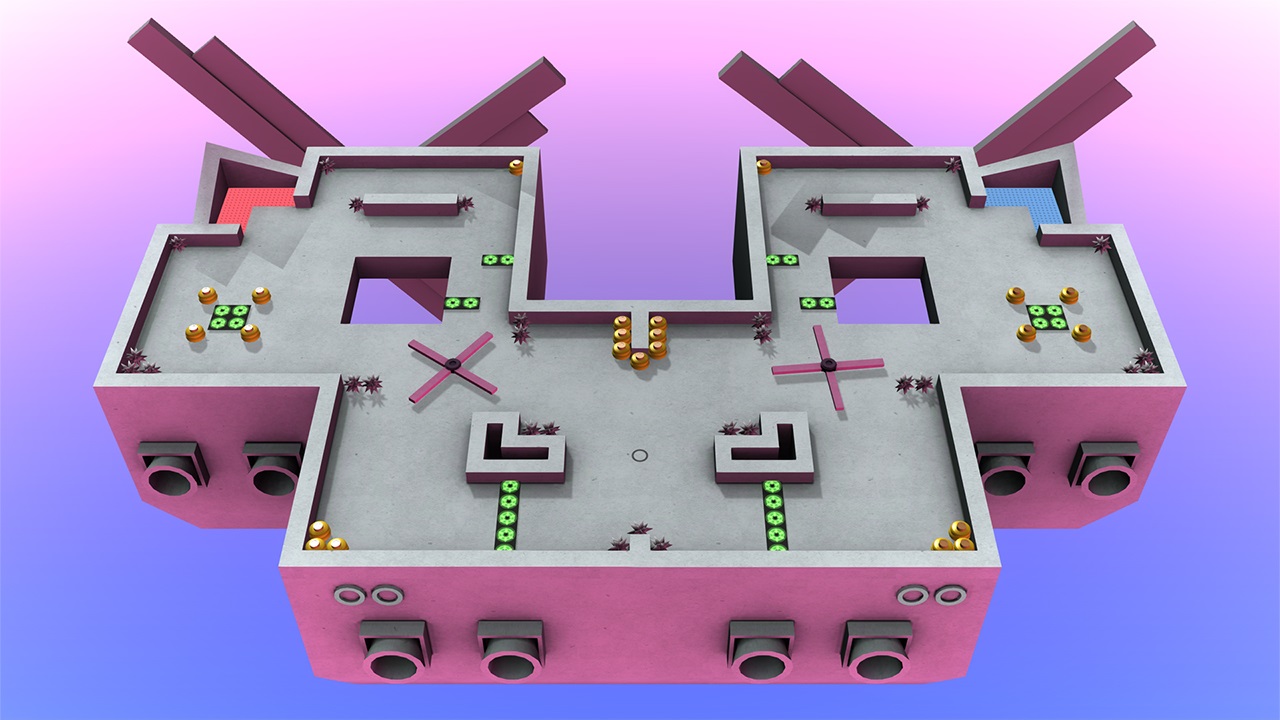 There’s something that doesn’t quite sit with me when it comes to multiplayer exclusive games. Take, for example, Duck Game: I’ve heard nothing but amazing things about how much fun it is, how great the mechanics are, how funny, etc. I have yet to play it because my Steam friends list is completely empty and I have never had any desire to track down people to play it. A waste of a few bucks, but live and learn, and also learn not to grind for Cards before actually playing the game. But multiplayer is a huge aspect for many, especially couch and online play, and I do my best not to dismiss it. So, though it may not be the right fruit for me, I can already see the delicious appeal of Clusterpuck 99.

Clusterpuck 99 is a surreal sort of “sporty sport” which puts you in control of what’s essentially an omnidirectional hockey puck. Your job is to get control of a different, non-moving puck in the center of the screen, juke and dodge an opposing team, and get a goal by either shooting it or driving yourself straight into the net. Far from taking this simple concept and letting it lie on the floor like a dead chicken, the dev team of PHL Collective has gone above and beyond to make a series of pretty interesting and intense arena designs to help keep things interesting. From tight corners with no escape to moving spikes and speed patches, there’s no easy way to get a handle on Clusterpuck, but it’s something that does get a lot easier over time.

Firstly, looking at what Clusterpuck 99 has done well, the atmosphere and tone is perfect for this sort of game. You know, from the get-go, that this isn’t a serious sports competition type of event. The landscapes are bizarre and difficult to navigate, and your puck is seriously just a puck (but one that you can decorate over time). There’s a nice amount of energy that goes into it: about thirty different arenas, going from “slightly challenging” to “why the hell is this available” in terms of actual playability. Given that this is something that’s entirely couch play, using the more “difficult” arenas automatically becomes more fun given the visceral and realtime reactions from both your teammates and opponents. 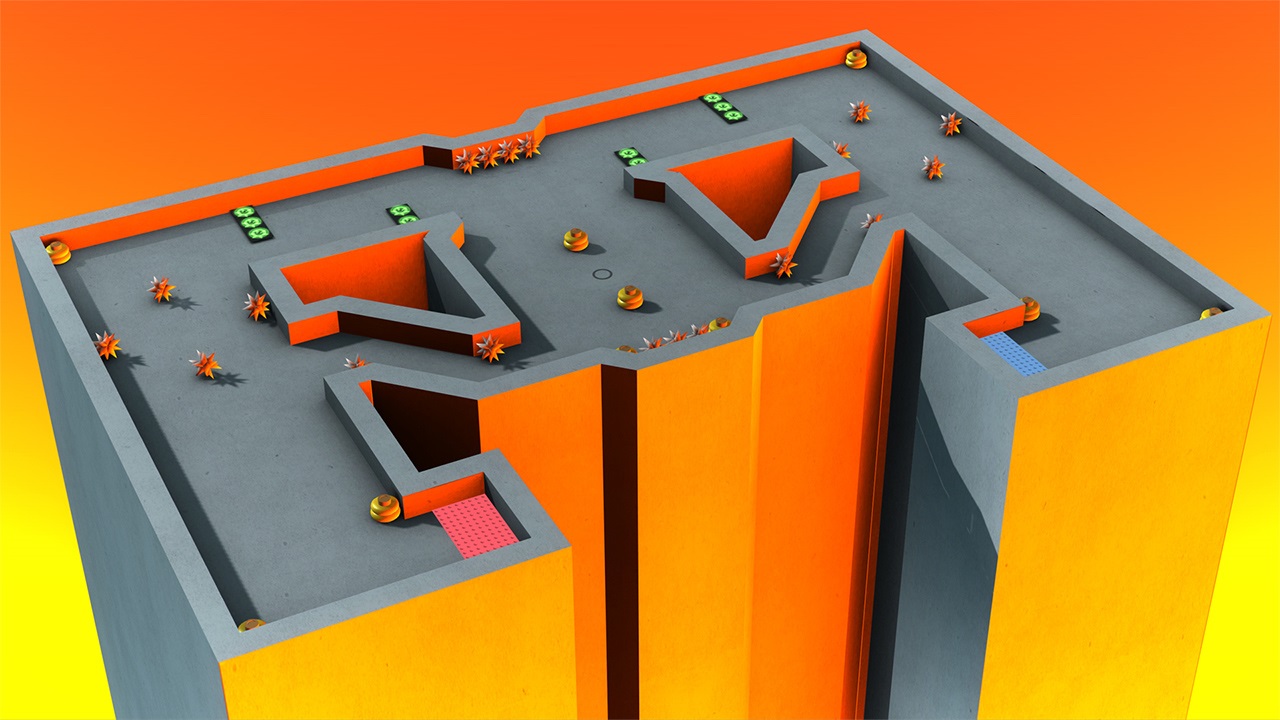 Additionally, I do love that PHL Collective decided to make the game have an eight player mode right from the beginning of their Switch launch. More than likely, if you can get four JoyCon sets together in one place, you can easily find eight people to join in, and there’s a lot of fun pandemonium that comes out of it. This is something that absolutely, positively should only be done in docked mode, as handheld is too tiny to even properly appreciate a one on one match. The prospect of eight people, all crammed around the Switch, trying to keep track of their player with little more than a symbol on top to identify? Hard pass.

As a party game, Clusterpuck 99 is fairly decent. It’s got the hallmarks of a good party game. It’s close enough to a real sport to at least draw fast recognition of the premise and mechanics, but not so entrenched that you need to create a roster or a team or whatever. With the options of either a score or time mode, you can modify things accordingly to make it more interesting and attuned with your own play expectations, and, even then, the maximum time limit is ten minutes. This way, the novelty of it won’t wear off too quickly and you won’t get trapped in a boring, ruthless game from someone who has played a bit too much. Everything that you basically need is unlocked from the beginning, with some additional perks and skins that come from the single player challenge mode.

Challenge mode is a fun little addition and adds some needed single player options, but the challenges themselves aren’t particularly…challenging. Win against different level of surreal AI teams. Shoot targets in certain increments in difficult positions. Navigate one time courses without dying too often. You get the picture pretty quickly, and it’s both repetitive and short in the grand scheme of things. The different skins are nice to have and give variety to the players, but it’s by no means something that needs to be done in order to appreciate the full scope of the game. Sadly, everything that I’ve mentioned prior to this sentence is, in essence, the game’s full scope. 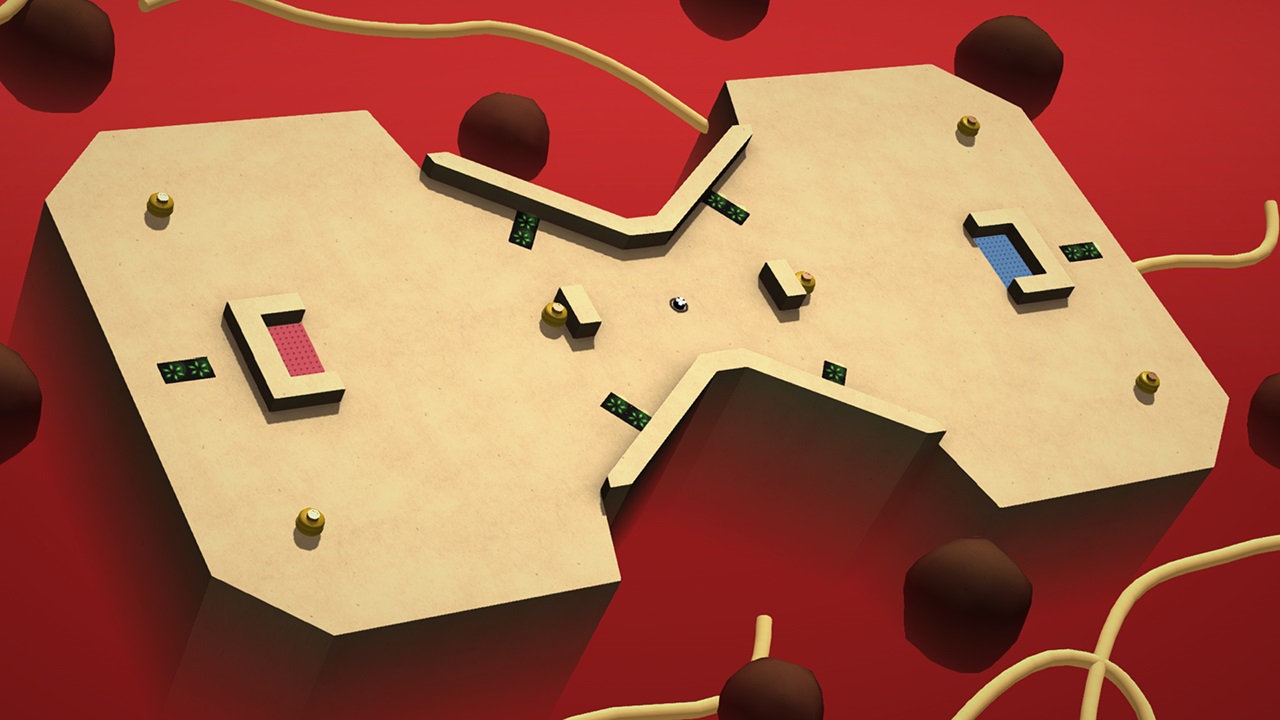 That’s the only letdown of Clusterpuck 99, and it’s a bit sizable. There’s little more than meets the eye. You get to glide around and make shots, maybe occasionally checking an opponent (or teammate, why not?) into spikes and off ledges. You get funny little superlatives at the end of the match, but they don’t unlock anything or do more than to remind you who didn’t participate (untouchable = didn’t go near the puck), sucked out big time (traitor = scored on his own team) or just spent most of the game respawning (death-o-phile…self explanatory). And, if you decide to do a one on one match and you each have two JoyCons, it’s really hard to go play a round with half a set. That’s because having one stick to move, one to aim and firing with the right trigger is the superior way to play, and only being able to shoot in the same direction as movement is hamstrung. I know it has to be that way to make the 8 JoyCons work, but you understand that worse settings aren’t going to be the best counter for diehard players. And, despite the obscurity of Clusterpuck 99, you know there’ll be some diehards.

Clusterpuck 99 is definitely for the party sports crowd or those looking for some good, nonviolent competition for elementary schoolers. However, for those wanting a more indepth experience or literally anything for the single player, you gotta simply roll on and get that fix elsewhere.