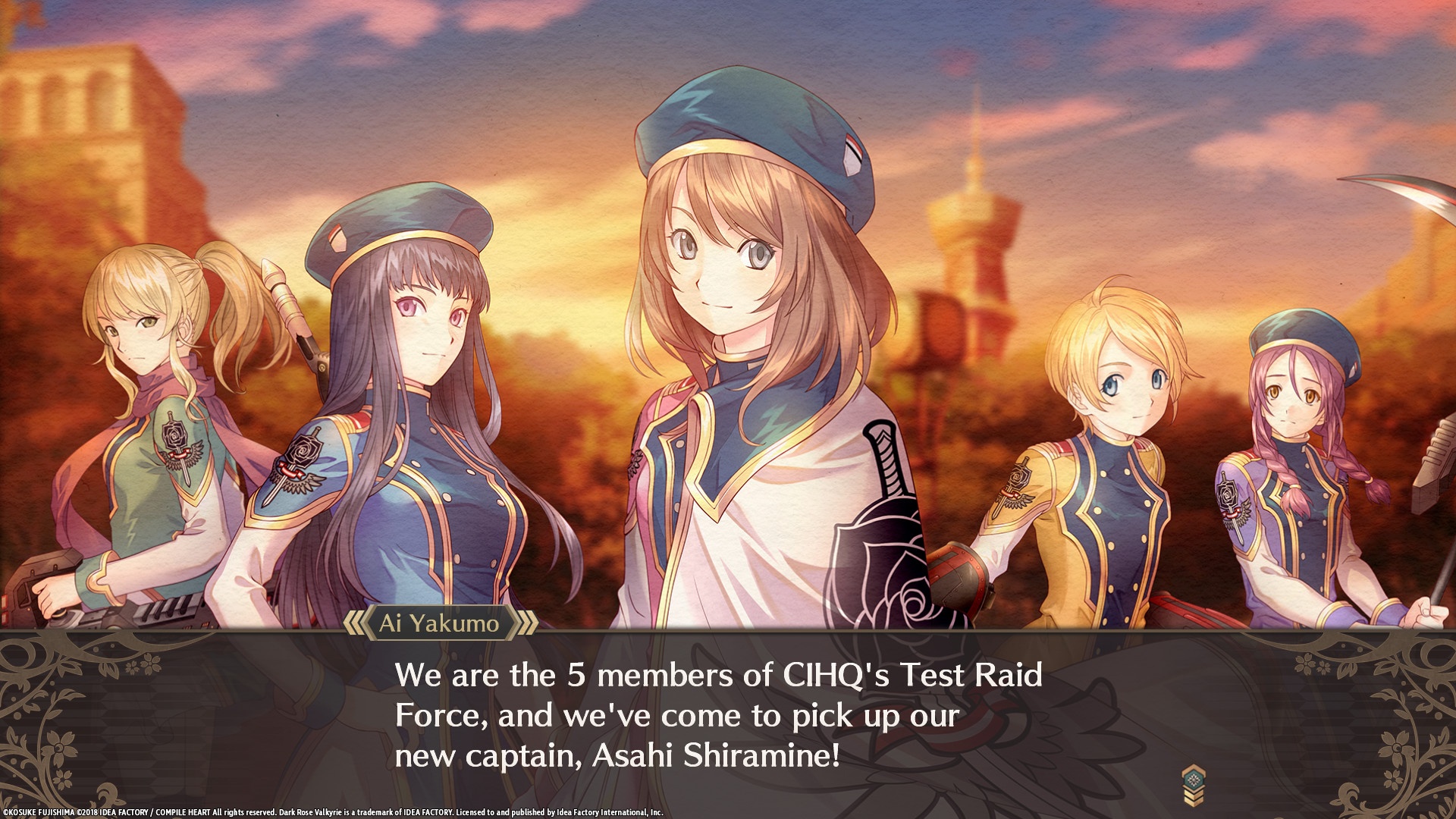 It’s been a long, long time since I’ve reviewed a title on the PC: the constant influx of new titles on the Switch has kept me busy for quite some time. Thankfully, now that the new year (in Japan) has come, the big titles are taking a small window of a break, giving me a precious few hours to swing away at Steam and get to some exciting and upcoming titles. And nothing gets me ready for a good PC install like the names of Compile Hearts and Idea Factory. Masters of some of the craziest, longest RPGS on the market today, I’m thrilled to announce that we are mere days away from the PC launch of Dark Rose Valkyrie, and it’s going to consume the days and nights of JRPG fans the world over.

Dark Rose Valkyrie is this fantastic alt-world tale, in which a meteor struck the Earth around the turn of the century and brought this crazy virus with it, called the Chimera Virus. This turned animals into monsters and humans into even worse monsters. Japan, thanks to being a secluded island, was able to rally and protect itself better than most places, but the Chimeras have finally made their way to the East. You, an up and coming military captain named Asahi, have been tasked with becoming the new leader in an experimental and cutting edge group, ACID, which is poised to fight back and cleanse the Chimera once and for all from your land, if not the world. ACID has three essential components: an elite selection of soldiers, the largest swords since Cloud Strife, and the Valkyrie system, a unique OS that allows the team to function and work together with precision accuracy. The only problem is the Valkyrie system has the side effect of occasionally creating split personalities, which mimic the early stages of having a Chimera infection. As men are more prone to the disease, being on the front line seems especially dangerous. Still, it’s not like something will go wrong and a traitor is going to compromise everyone’s safety and the fate of humanity…right?

Dark Rose Valkyrie is an incredibly expansive and detailed mission-driven JRPG, in which you must decide on the four members of the squad you wish to put on the front lines of ATB combat. The primary idea behind it all is that your ACID squad (Anti-Chimera Interception Division) will be dispatched at various locations where Chimeras are known to be. You’ll see the enemy coming, which will give you a chance to get the jump on them and strike first or, unfortunately, get ambushed. Once you get a combat turn, you can decide between any number of attacks, from straightup “attack” to a variety of elemental based melee strikes, special gun-play type ranged hits, or specific extra skills that unlock per character. Like so many of the RPGS that come from Idea Factory, the length of time and level of detail that goes into combat and the items therein could fill a separate, incredibly long review. I’m going to gloss over some of the basics (leveling up stats, buying equipment) to focus on the Overdrive. 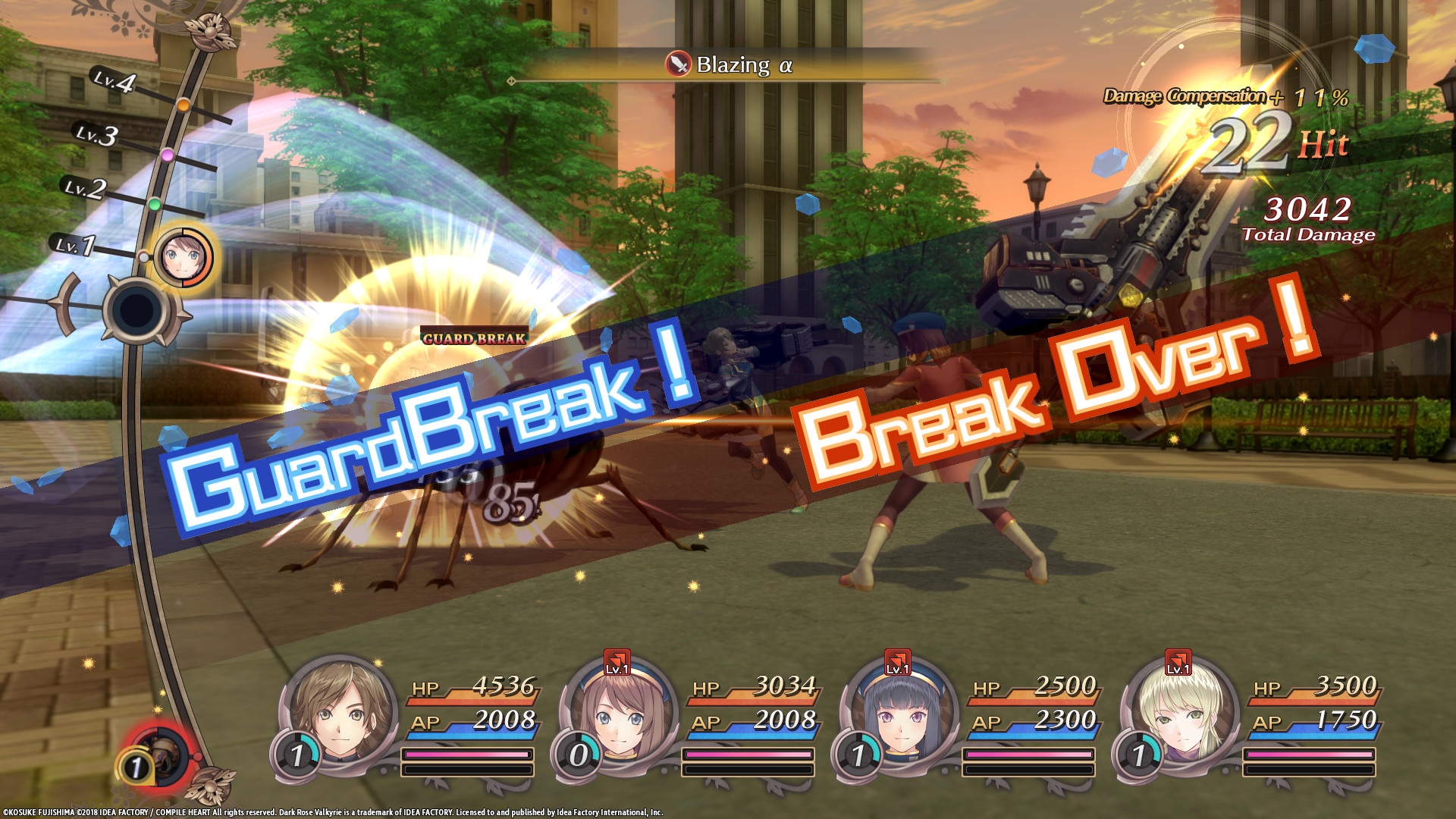 Overdrive is this cool feature that lets characters (after a certain level/chapter) transform into these new forms of themselves. As a result of being plugged into the Valkyrie system, each character has their own variant that they can change into, become crazy powerful and do ridiculous combos, called Riot Combos. Not only is this something that looks amazing and can be a great tide-turner during difficult rounds, it also plays directly into the storyline point mentioned above. Far too often, cool gimmicks and ideas in games are standalone elements that just seem to occur. Dark Rose Valkyrie not only makes the Overdrive a critical part of combat strategy, but it’s the lynchpin for a huge reveal that happens later on, and that just sits incredibly well with me. As an RPG fan with no time for RPGs, I get frustrated when my time is wasted on stuff that either sounds cool and is never seen or, conversely, is brought in and demonstrated with no preamble whatsoever. This happens more than I’d like to remember, and Dark Rose Valkyrie is free and clear from this.

There’s a shifting difficulty setting that really should not be put on Very Easy unless you basically want a visual novel with extra steps. Putting the game on Very Easy removes almost all strategy and turmoil outright. Not only are the rewards and drops pretty spiffy, but monsters just seem to collapse in upon themselves without much effort. You can set each character to auto and just let them rage away while you go make tea. Sure, you don’t get to do the cool synchronization attacks that bring in the back line of soldiers, but you can basically just mash A and let combos and insane amounts of damage pile up without trying. Any player who’s looking to get their RPG salt’s worth needs to bump it up to Normal or Hard so that there’s more to this than meets the eye.

Another unique aspect about Dark Rose Valkyrie is the Evaluation system, which comes from doing side missions and interacting with the different NPCs outside of the battle.  The side missions are pretty standard, in that they typically align more with a character’s backstory and are a great opportunity to stall the main missions for as long as possible to level up. Chatting, however, is a different facet. Those who saw Idea Factory’s name may have also guessed that fan service is a big part of the game, but that’s not as accurate as you might think. The conversations, while pretty limited in choices, aren’t as straightforward as “suck up and say what you think is best.” Most of the time, you need to keep in mind who you’re talking to in order to move things in the correct direction. Luna is clearly hungry for some attention and affection, so starting off bold with answers works well, but knowing when she’s showing some soul and toning it down is the key to success. On the other hand, Coo is crazy shy and needs to be allowed to breathe, but she will eventually crack and open up to you, something she only ever does to her sibling, Amal. These side conversations are totally optional, but completionists will want to pursue them to the end if they want the “true” endings. Additionally, following up on them allows for certain storyline elements to be shaped to your own liking. I’m doing my best not to spoil anything here, but if you decide you like one of the only other guys in the building more than the other, take the time to express as such. 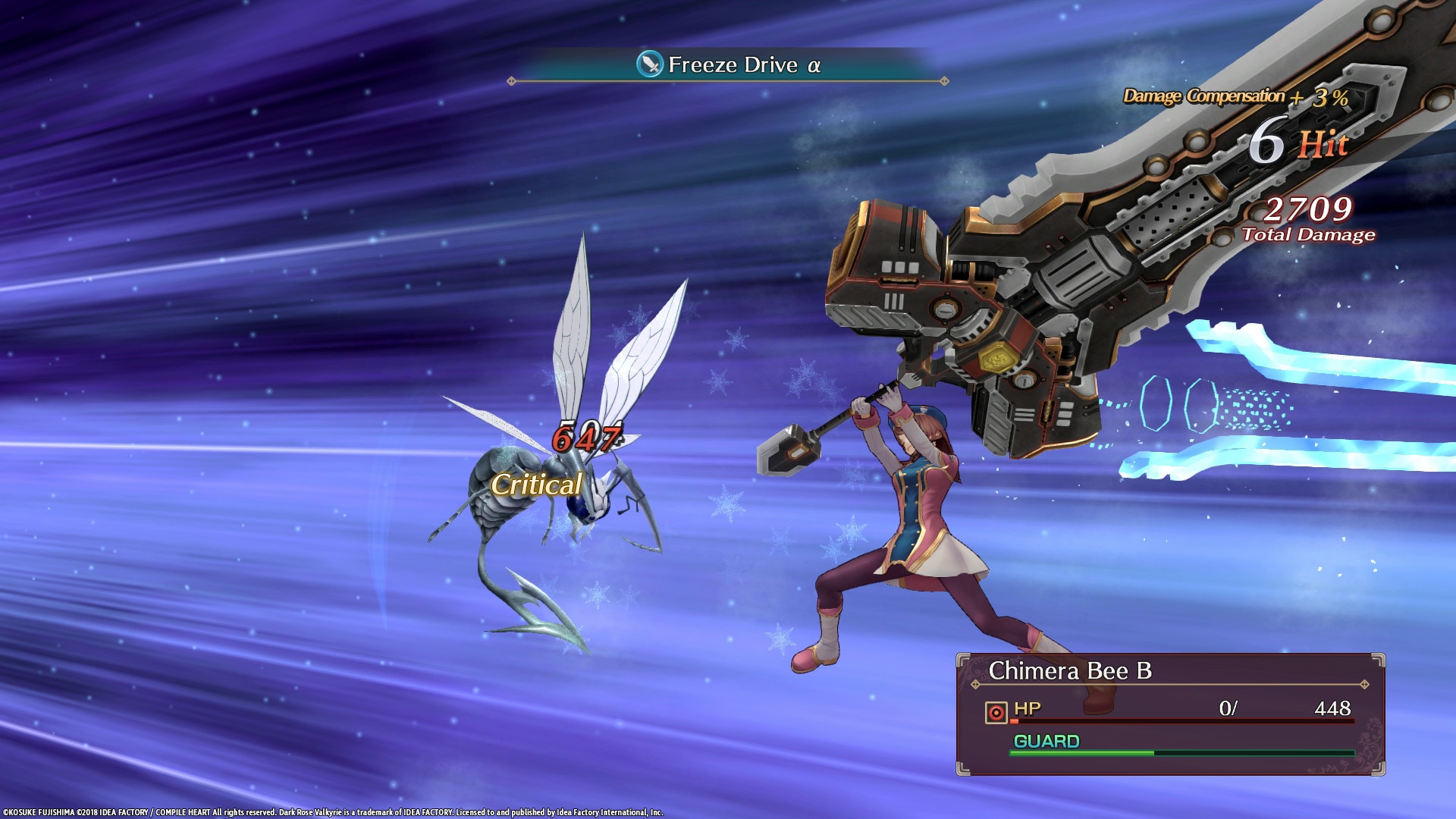 One thing I gotta say is that this is a great departure from the normal titles that I tend to see in the JRPG “all women for some reason” games. Sure, there’s destructive clothing that happens in combat (because the developers simply can’t help themselves), but that’s as far as a lot of the overly sexual nature of things goes, and that’s pretty tame in comparison to a lot. Instead, Dark Rose Valkyrie does a great service to the fans in general by taking all of the wonderful techniques they’ve perfected over the years – optimal English and Japanese voice acting, good animation decisions and when to hold on stills – and put them into a game that easily takes 40+ hours to complete that also doesn’t have constant 4th wall breaking. Idea Factory’s great titles usually are campy as hell or full of boobs and lolis as far as the eye can see. While there’s certainly some eyebrow raising exchanges and the aforementioned paper mache uniforms, a ton of this is simply plot driven exercises in combat. You enjoy the slog and grind to level up because the combat is well balanced on higher difficulty levels. You enjoy the exchanges between characters because they actually have personalities and dimensions to them. You can actually be surprised by plot twists because they aren’t as heavy handed in hints as other games. In short, it’s actually a good game.

Fans of long-form JRPGS with a layer of investigation and inquisition will have a ton of fun with Dark Rose Valkyrie. Not only is it chock-full of content, team combinations and solid combat, but this has been ported with love to the PC by a team who really understands and hears the complaints of people with lower end machines. If you’ve got a beast of a rig at home, you’ll run this smooth as butter and love the way it looks up on your monitor. If you’ve got a machine that’s got a graphics card that was new four years ago and an i3 you found at a swap meet, guess what: this game still runs great. A PS4 wonder title, carefully primped and prepared to run on any computer that’s actually meant to game. Good job, folks. Now, if you’ll excuse me, I think I’ll take another run at the game: Yue was makin’ eyes at me back around chapter five and I bet I can say the right things this time…