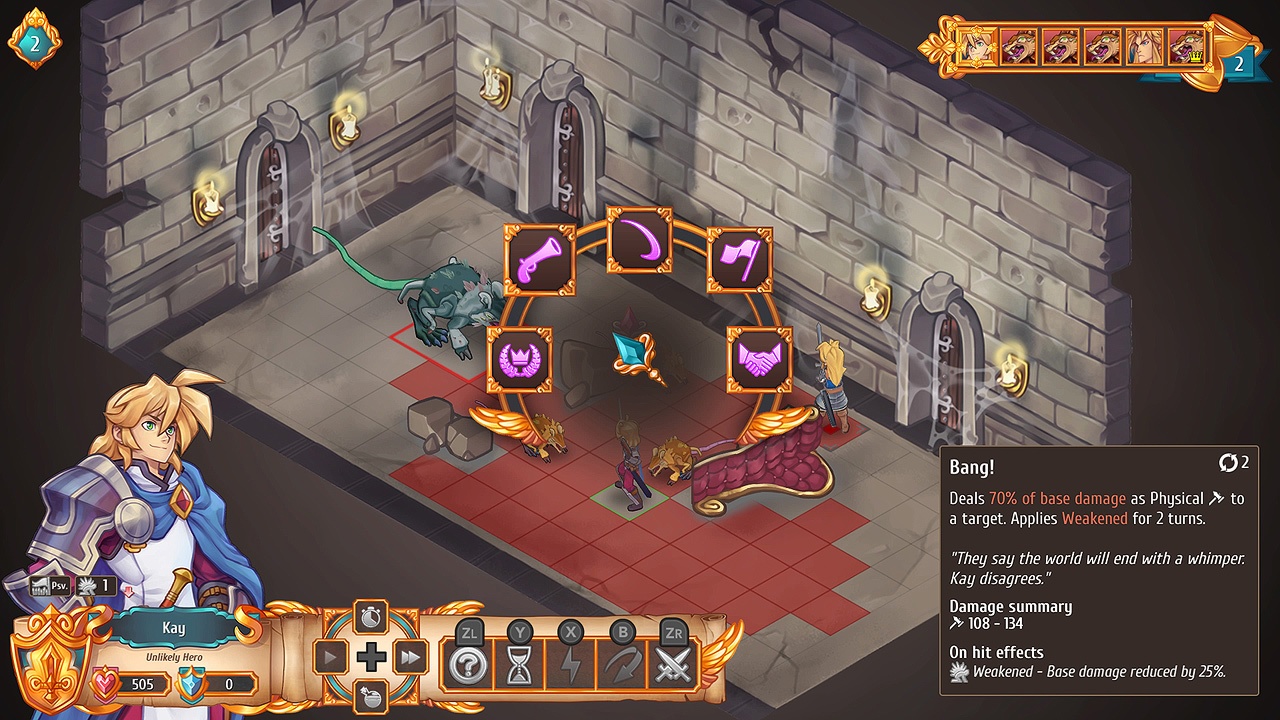 I really think Final Fantasy Tactics has permanently ruined me on the SRPG/TRPG front. It was my first foray into the genre, and it changed my perspective forever. Final Fantasy games had always been these long, epic adventures that would span months of my time, but it was because the game itself, the worlds, tended to be sprawling and full of lore. FF Tactics had plenty of lore and story, sure, but it also had the combat, which, unlike random encounters in Final Fantasy, were 10-45 minute investments, depending. I loved the hell out of it, but, after a fateful day when I forgot to save for ten hours and the power went out, I couldn’t bear to pick up another for a long time. I’m honestly glad that I gave Disgaea 5 a try when it hit the Switch, because it did show what cool characters, fun mechanics and hilarious dialogue could lend to the genre. Sadly, a few of these things are lacking in the latest SRPG, Regalia: Of Men and Monarchs.

Regalia: Of Men and Monarchs, which comes to us from Pixelated Milk via a highly successful Kickstarter campaign, is the tale of the House Loren, a family of four who are the end of a long bloodline. Once upon a time, House Loren owned a big-ol’ castle and had fealty from hundreds, if not thousands, but the whole fortune disappeared and now Kay, his sisters Gwen and Elaine, and bodyguard/henchman Griffith, return to their once-beautiful estate to find…desolation. Thankfully, inspiration, in the form of a debt-collector, gives the family a clear goal: restore the land to its former glory or get got. Kay, being rather fond of his bones in the state they are, rallies his family, both living and dead, to bring back honor and economic value to his ancestor’s stomping grounds. In the process, everyone will learn a lot about House Loren’s history, the people who still inhabit these lands, and what it means to have a bit of goddamn pride in your family tree. After all, Kay, you’re descended from royalty: act like it!

Now, what happens next is something that I’ve seen time after time after time with crowdfunded games: too many damn hats. On the one hand, your primary situation is a TRPG, in which you have your crew, which is flexible and variable (but usually reliant on core characters depending on the missions). You’ve got main and side missions, all of which are (initially) moving towards the primary goal. You get slapped onto a grid, monsters are there, bad guys are there, and you gotta do your best to command, navigate and make sure that you’re situated enough to get through the battle in one piece. Thankfully, the developers did a bangup job of scaling the difficulty levels, removing “easy” in favor of “story mode,” which I highly recommend for your first playthrough unless you are an absolute TRPG masochist. It’s not that hard is way too damn hard (it’s got a real nice edge through), it’s that the controls and the way deployment works is really kind of wonky at first. 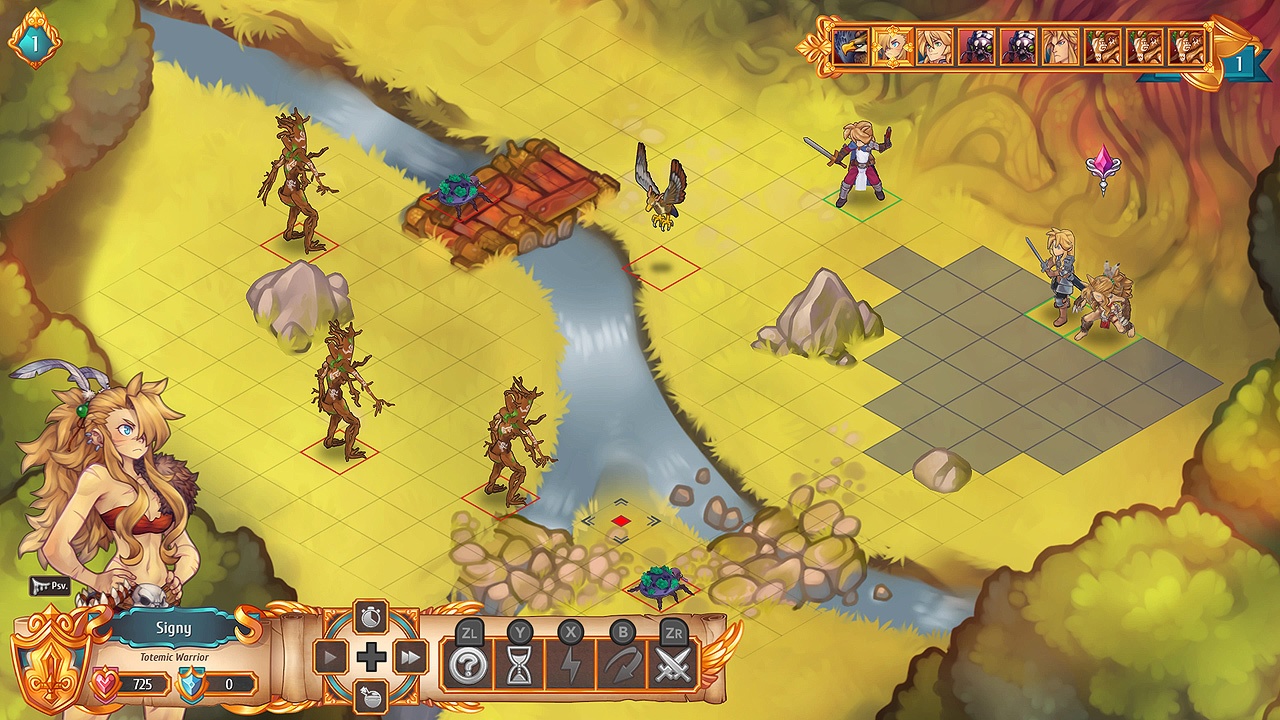 I think the development team wanted to make sure they were doing something different with Regalia: Of Men and Monarchs, and that becomes apparent in a lot of the game. First of all, everyone’s got a nice variety of attacks and techniques as soon as you get them, and there’s plenty of evolution and progression in both active and passive skills through leveling up (and also relationship, but that’s more of a side thing). But the resulting “choice arc” that comes with most battles is kind of handsy to understand when you’re getting into it. It’s kind of like switching your keyboard to Dvorak: it’s insane to figure out and remap at first, but eventually you get up to speed and, theoretically, you can move even better than before. There’s a lot of extra confirmation and application to combat for Regalia, and coming from things like Tactics Ogre or even Devil Survivor the initial application isn’t great. Still, this is a decent length game, and you’ll have plenty of time to understand the commands.

There are some pretty fantastic fights that you’ll encounter, as well. Regalia makes a point to thrust the player into a nice variety of scenarios, from insurmountable odds to giant, grid-consuming monsters that, miraculously, you’ll find a way to get through. This is where Regalia really shines: making sure the combat has some spice and light to it. When you have the best kind of strategy laid out before you and all the characters work together, the battles are fluid and satisfying. I felt like I missed a LOT even though the odds said I had high percentages of landing the blow, but so did the enemies, so it worked out well in the end. Again, Story Mode combat, while far from difficult, still managed to keep me engaged throughout, so new players can safely invest in this setting to enjoy both the story and the gameplay.

But you don’t stop at strategy based combat. Regalia: Of Men and Monarchs, also has a distinct “4X” element that’s described as “light” but only in the sense that you’re not actively playing Civilization. If you want to have any hope of actually accomplishing the goal of clearing your debt, you need to work your ass off to make sure the castle and the surrounding townships are coming along nicely inbetween fights. If you decide to neglect this aspect, you’ll fail. You don’t need to sit down and delve into the history of Endless Legend to figure out this one, but knowing and being aware of the symbiotic link that different sections create is necessary. For someone who doesn’t particularly care for this style of game, it wasn’t too arduous to have, but there were moments where I felt my time could have been spent…elsewhere.

Then, there’s the entire narration and tone of the game. Don’t get me wrong: I love when a game is self-aware and has a bit of humor to it. Regalia: Of Men and Monarchs really treads the line between “amusing” and “hammy.” On the one hand, having Kay’s self-deprecating approach to the situation slowly turn around and his sister, Gwen, kind of being a constant in her attitude was refreshing and funny. Elaine has her own transformation throughout, but it’s not nearly as heavy handed and, honestly, I liked her the best. Griffith…man, I really wanted to like the guy. He’s the only one who really feels like he’s at home in the whole game scenario, but he grows repetitive and kind of naive overall. A lot of the voicework, despite being dubbed as professional, felt very “high school play” in terms of delivery and pacing. Not the worst I’ve ever heard, but certainly not the best. Still, there’s tons of new characters who get introduced all the time, and Crucey, the debt collector, is one of my favorite characters of all: something about his style and presentation makes him incredibly memorable, so I’m glad he was a big part of the story. 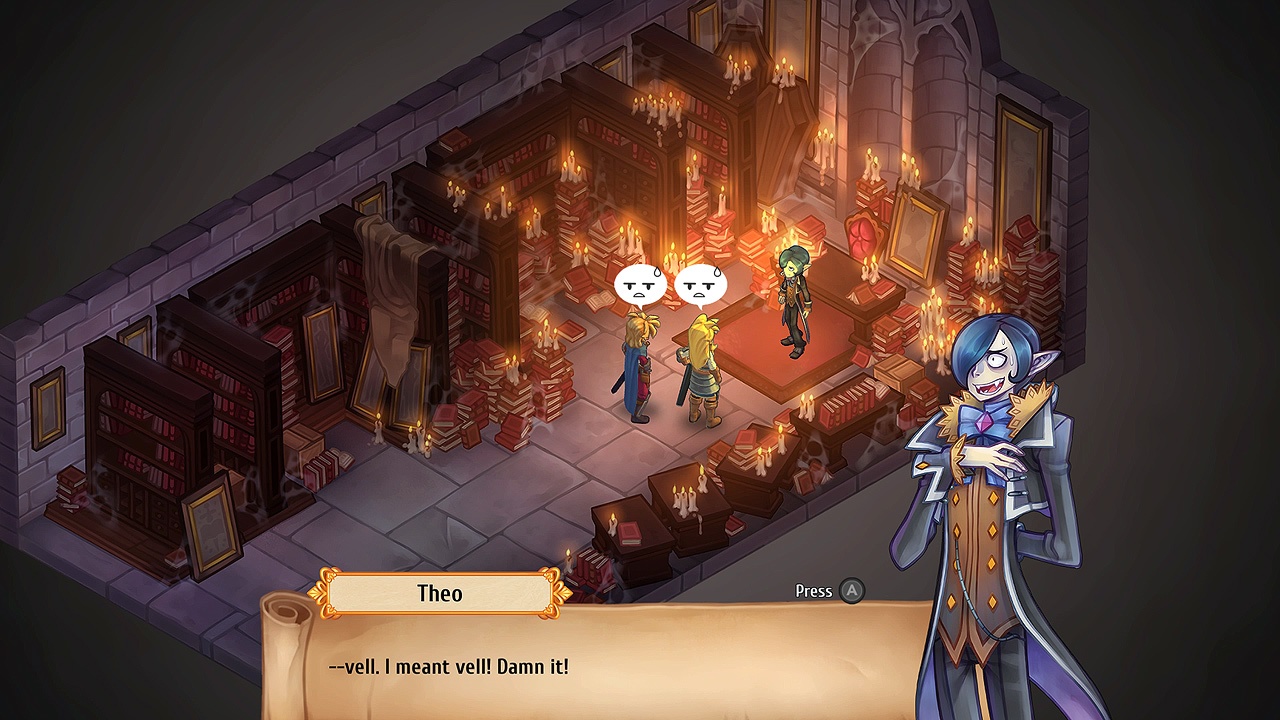 Lastly, performance is something that must be addressed. When a game is available first on the PC, then on the PS4 and Vita, you have some things to keep in mind for a Switch port. In terms of comparing to the other platforms, Regalia seems to work and keep up just fine, and I had zero lag issues in combat. However, Switch users have also become accustomed to few, if any, load screens, and having their games be zippy and responsive. Regalia spends a lot of time loading between dialogues, between combats, between whatevers, and it gets repetitive. You’re constantly mashing the A button to get to the next screen, and the tutorial, which lasts about an hour, has you jumping between exposition a lot, and you can “skip” it, only to get thrown to another loading screen. It honestly takes the momentum out of the early part of the game, and then things get better until you hit another pocket of storytelling. Players should basically be ready to sit and read for a while.

Regalia: Of Men and Monarchs is a really well done TRPG, and I can feel the love and homage that’s been baked into this. I honestly don’t feel that it is a JRPG, but that’s also becomes I prefer my combat to be ATB and my heroes to have blue hair. There’s some flaws, but they’re small enough to look over as long as you have a good memory card and some patience. If you can get through the tutorial, you’ll find an incredibly vast game within, plenty of replay value, and some truly funny and memorable moments.