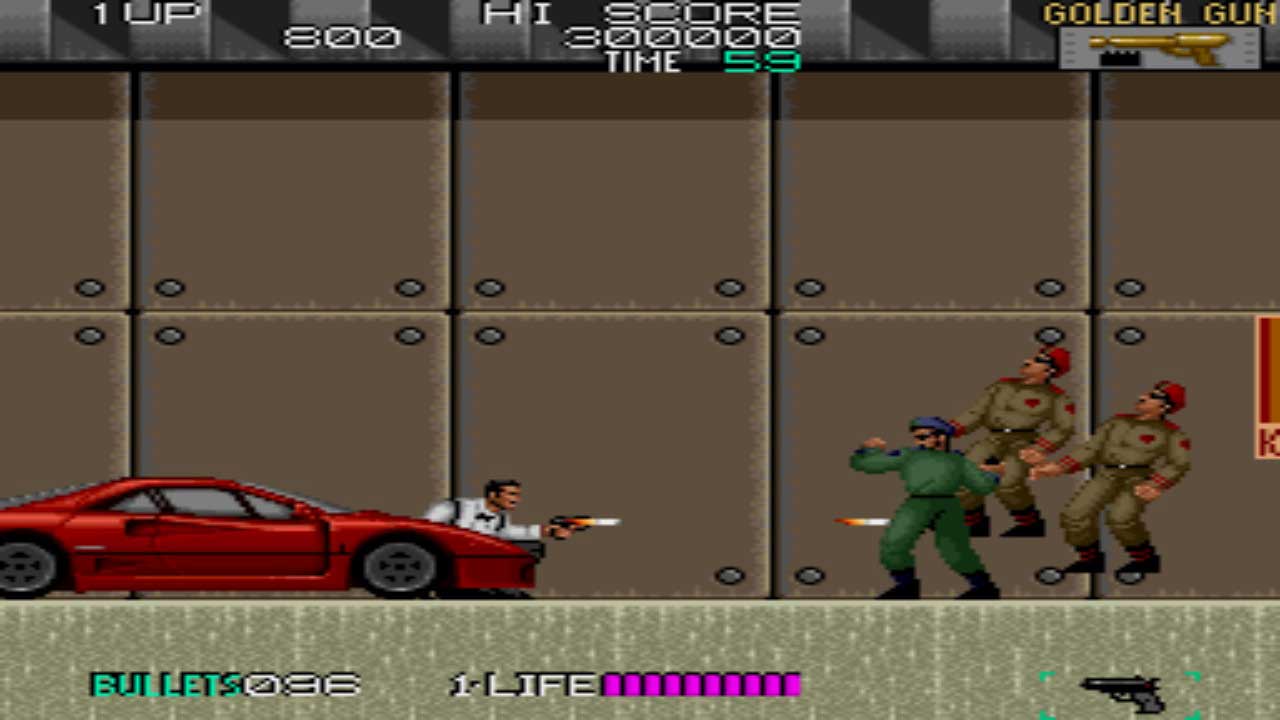 Johnny Turbo and I have been on relatively the same page since the port of arcade titles started coming to the Nintendo Switch via Flying Tiger. Either they were heralded classic games or, at the very least, they were enjoyable and recognizable arcade experiences. After all, even during the heyday of the home console, there was so much to be gained from the cabinet gaming world and doing your plays of shooters and brawlers out in the open air. But there are some games that are inherently nostalgic to people based on when they played them and not necessarily the quality of the game. R.C. Pro-Am, for example, is objectively terrible compared to modern racers, but it was the best thing ever when I was a kid, so I still load it up on occasion just to punish myself. If I didn’t have those memories, however, I don’t think I’d play it. So I’m sorry to say that Sly Spy is only going to appeal to those who got to play it in its prime, and not attract brand new fans.

Sly Spy is one of the most obvious James Bond knock-off games I’ve seen in my life, and that’s saying a lot. Most spy games inherently have some kind of Bond homage or nod in it: even Never Stop Sneaking had a distinctly Bond theme song. Sly Spy has it all: a spy with an obviously fake name, the need to constantly wear a tuxedo, a gun with an 800 bullet clip carefully concealed in a pistol, and an evil organization bent on world domination. That’s not something you piece together, either, that’s literally the name of the group – CWD, Council for World Domination. These jerks decide the best way to take over the world is to kill the president and prepare a nuclear strike against the US. How, in any reality, does that make sense? No one wants to be in control of an irradiated wasteland, but nuclear missiles seem to be the go-to for groups and individuals who think that brute force is going to get them the crown. Sly, not being a fan of dictatorships, decides to take on the whole goddamn council himself. Because he’s Sly, that’s why.

Sly Spy is a sidescrolling platformer that tells you, six seconds after you start playing, this was meant to be in arcades and not many other places. Sly has a gun that starts with around one hundred bullets, and he can keep picking up more and more due to bad guys dropping bullet recharges pretty frequently. I think I had four hundred during one level, which changed my game play considerably (modest gun fire to mashing the button as fast as possible). A single bullet will kill most enemies, though this changes as you move forward and encounter tigers, dogs and the occasional barrel chested, barrel throwing brute. Sly can take, theoretically, about ten hits before he dies, and he’s only got one life: he’s a spy, for God’s sake, not a superhero. If you die, you see an animation of the nuclear missile getting ready to launch and you have ten seconds to insert another “credit” before it’s game over for you and the whole US. 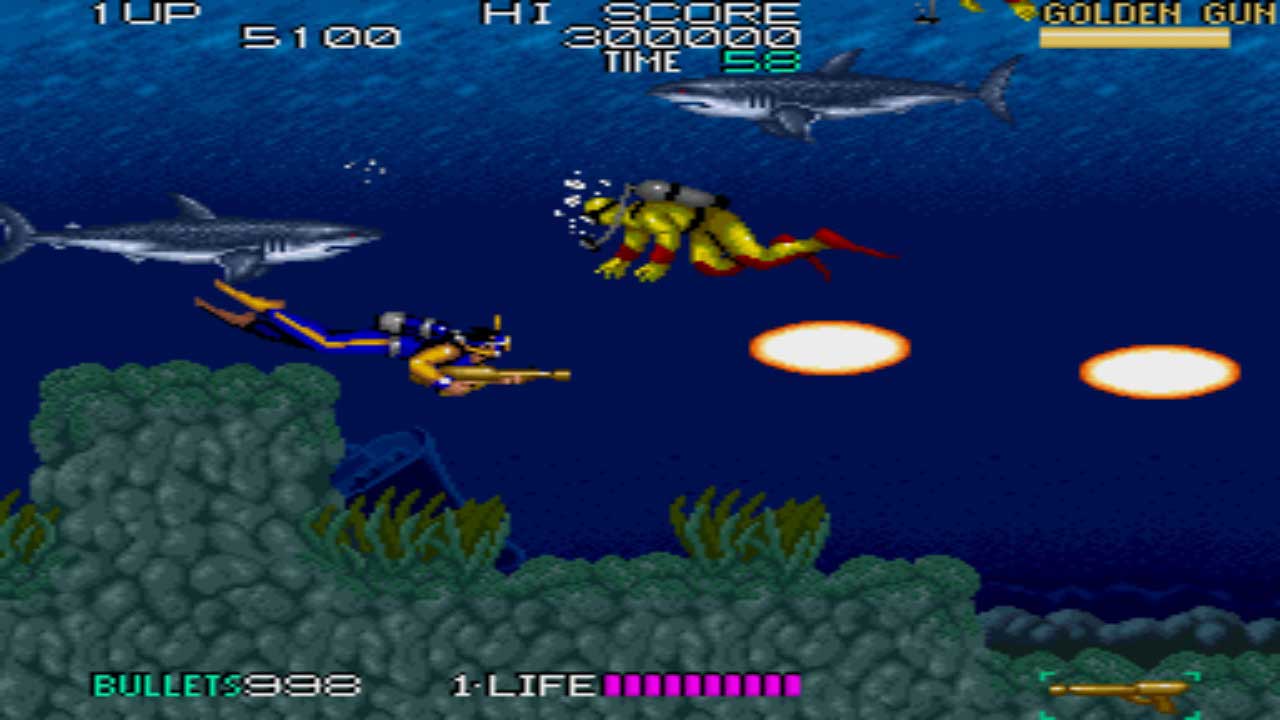 Now, if the bad guys were merely shooting and stabbing at me and that caused damage, fair game, but this title likes to go firmly into the “screw you” realm in terms of damage. Having enemies run into equals damage. This sounds reasonable until you see how thick the screen gets with enemies pretty much after the first stage. These henchmen will rush you to the point that I had screen slowdown because there were two dudes with jetpacks dropping bombs, two huge dudes throwing barrels, three normal guys with guns on either side of me and about two attack dogs running into my legs. This resulted in me dying in a flash, then respawning in the middle of all that nonsense with three seconds of invulnerability to clean house before I started taking damage again. This is all even before you run into things like sharks who’s tails damage you, spikes that only damage you and not the enemies, and a boss who kicks the damn gun out of your hand.

Sly Spy will take you across several different levels, including a motorcycle chase on the highway, under the seas with scuba gear ‘(twice!) and finally to a missile silo where you face off against a chubby dude who’s the leader of CWD, but gets no name or otherwise identifying stuff. Despite my angst with the sharks, the underwater levels were some of the best, and I’m not just saying that because I got to murder people with a harpoon gun. The underwater levels were significantly shorter, and seemed to have the best cohesion to them. The highway level was also pretty fun and one of the few where I never took a hit, because the enemies actually were spaced out reasonably and gave me a chance to shoot them. The land based levels, however, are the worst, due to enemy density and variety, and those are the most prevalent. I can’t begin to tell you the frustration of having several hundred rounds of bullets in your gun, and then having Jaws kick it out of your hand so you need to kickbox him to death. Especially since I hadn’t done any kickboxing prior to this, so I got my ass handed to me.

You’ll notice I called a boss Jaws, as in the famous henchman from Moonraker. That’s because Sly Spy might not call him Jaws, but it’s so evident that this was built to be Bond that it’s painful. There’s a short Asian dude who throws a bowler hat as a weapon. There’s a guy with mechanical arms. The final boss puts you in a trap he doesn’t expect you to get out of and is stunned when you do. Hell, if you pick up three G powerups, you get to use the Golden Gun, which feels like it has to be copyright infringement. Golden Gun, by the way, is just an unlimited gun that shoots faster and lasts about thirty seconds. Sly Spy needs the attention of Roger Moore and Sean Connery to validate its existence, and c’mon man, you’re better than that. Though I will admit that temporarily using a jetpack was dope, I just feel the Bond references were too much. 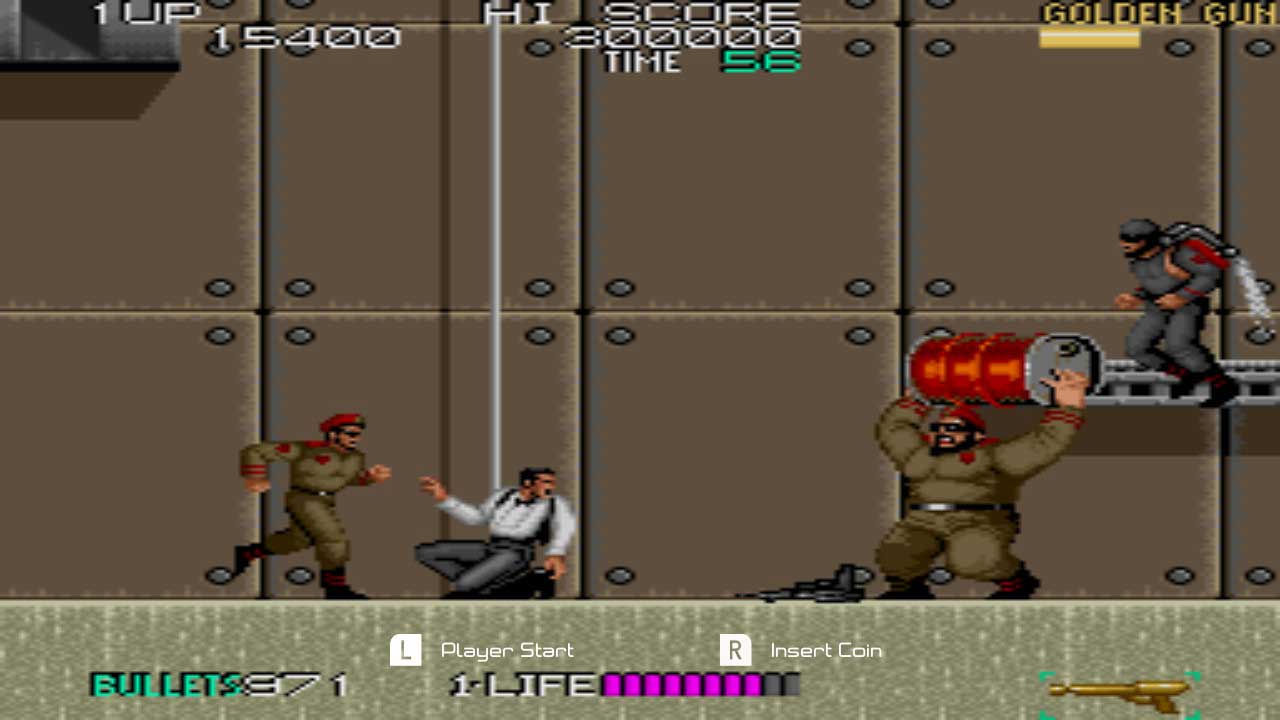 So why does the game bomb? Because it’s stupidly unfair. The enemy density equals one thing and one thing only: more credits, or, in the arcade version, more quarters. Sure, as an at home play, you can just mash the ZR button and add more credits and then move merrily on your way. But actually trying to play from start to finish without continuing is a ridiculous task that’s hampered by constant, unpredictably tenacious AI. I attempted to simply run past a huge group of enemies and the end result was all of them catching up to me in spades when I had to stop and climb a ladder, and then I died a lot more. And if you’re down to simply buffalo ahead, feeding continue after continue into the game, you can finish it in under a half hour AND you would have put roughly five dollars worth of quarters into the cabinet. Data East would send you a personal thank you postcard, but they went bankrupt years ago, probably because of this nonsense.

I can’t deny that Sly Spy was stupid fun. I shot a bunch of henchmen, I kicked a tiger to death, I saw the president improbably come back to life specifically to give me a Ferrari full of women, and it took the same amount of time as watching an episode of Speechless. But it wasn’t a fulfilling adventure: I don’t want to repeat it and I don’t know if I’d recommend it to people outside of their wheelhouse. If you really must collect every arcade title that ports to the Switch, be my guest: Johnny Turbo has all the great filters, aspect ratios and options you could hope for. If you remember this game fondly, don’t let me crap on your memories. But, if you simply want a new game to play that’ll occupy you for longer than an afternoon, then this mission is not for you.