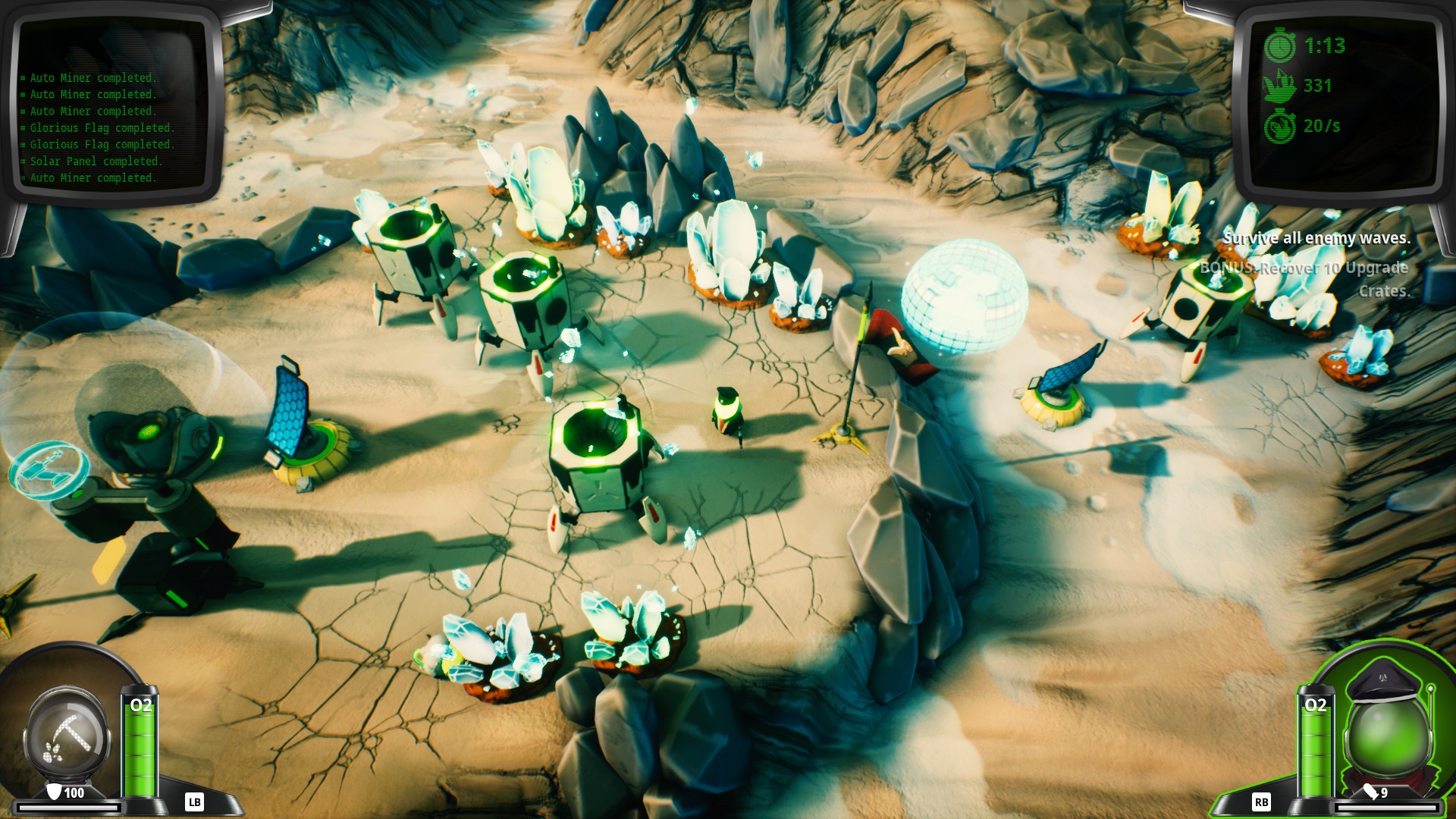 Mars or Die! is the work of 34BigThings, the studio that was also responsible for Redout, a throwback to the good old days of games like Wipeout, and the frenetic Hyperdrive Massacre. With that in mind, the studio isn’t really known for sticking to a specific genre so, when I first saw this game, I wasn’t surprised to see that the developers were bringing their own take on another genre.

The first thing that grabbed my attention was the cinematic announcement trailer for the game and, as a consequence to that, I was let down when I found out that there weren’t any kind of cutscenes in the game itself. The game does have some narration at the beginning of each mission, but the trailer was the reason that made want to play this. The game has this really funny and entertaining feeling to it, but the trailer really made me feel like I was watching one of those Pixar shorts brimming with goofy humor.

Mars or Die! is a mash-up of various elements from different genres, from the strategic building from a tower defense game to the kind of action that you’d expect to see on a twin-stick shooter. The setting of the game itself paves the way for the ability to control two different characters during missions, that is once they finally meet each other on one of the missions. The player controls Bean from the Engineering Corps, and Bob from the Assault Division, as they’re sent to Mars in order to claim the Red Planet in the name of their glorious fascist regime, but, as usual, things didn’t go as planned. Upon arriving on Mars, the two find themselves stranded and surrounded by an angry army of Martians that want nothing more but to expel the foul invading forces. 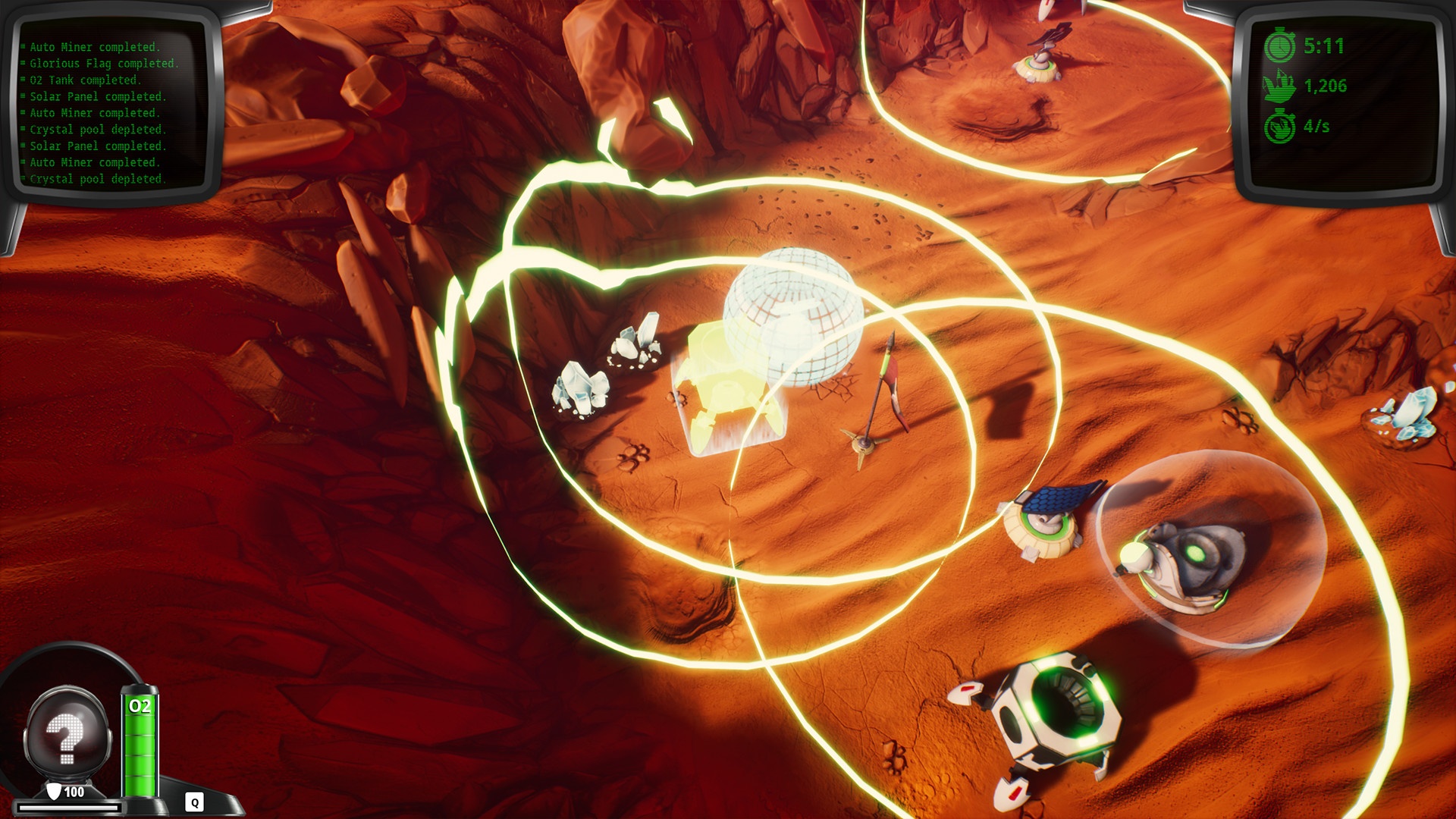 The game features story campaign with 9 missions, as well as an endless mode with leaderboards. Having said that, it’s quite annoying that the game doesn’t allow you to save during missions, meaning that if you have to leave you’ll lose your progress and you’ll have to start over. While the missions get progressively harder, the core of the game still remains the same, build, explore, fight if you have to, and eventually get upgrades. In every mission, you’ll find yourself building up a small little base, nothing too crazy since there’s a rather small selection of structures that you can build. Speaking of which, one of the facilities that you can build is a factory, which allows you to build turrets, but I don’t see much sense in this building, as in the vast majority of missions you already start with this built. Besides that, there are also a heavy and a light turret, solar panels to power up your buildings, a resource extractor, an O2 tank that you use to replenish your oxygen, and a research center that you use to turn these crates that you find in each level into passive upgrades for your two minions or the turrets.

Given the fact that the game advertises itself as a tower defense game, I was rather disappointed when I found out that this was pretty much what was in store in terms of base building. There’s also no maze building like in some tower defense games, instead, what you’re doing is covering key chokepoints with turrets so that the enemy waves can’t get through. This also brings in exploration to the table, as resource spots are fairly limited in terms of how many resources they contain, so you have to explore the map with your minions in order to build more outposts. There is no main base per se, but most often than not mission objectives will require you to move one of your units to a specific location, so you’ll have to sort of build a fortified path as you make your way towards it, by building oxygen tanks so that you don’t suffocate, extractors so that you have enough resources to build the next outpost you deem necessary, and obviously turrets to make sure what you’ve left behind isn’t destroyed by enemy waves. 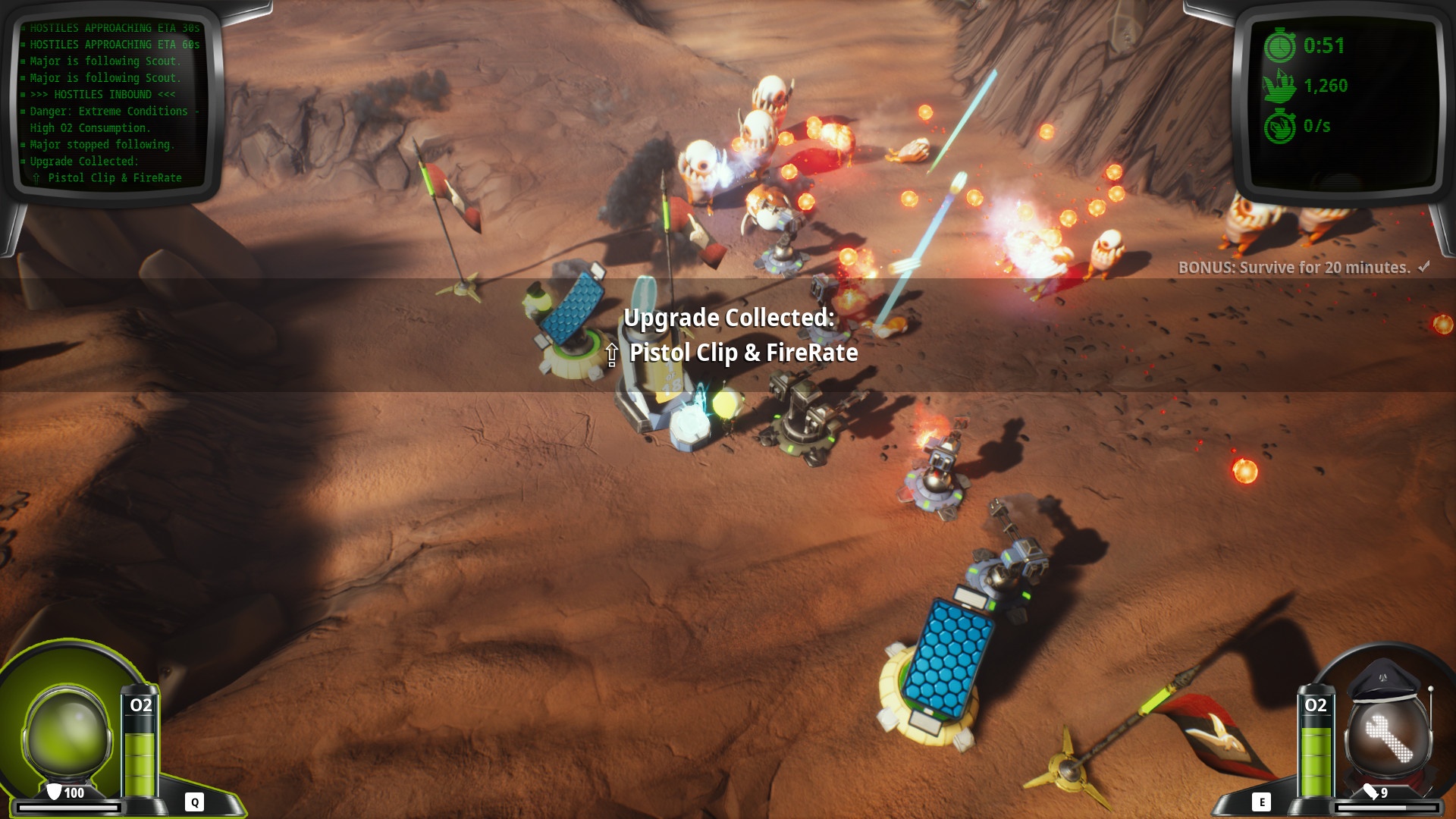 While the game certainly can be played in a twin-stick shooter form, this only happens when you play as the Major, which possesses a measly pistol. With that said, the shooting element of the game is rather poor, as the pistol feels like it has no impact, even though it’s quite effective in getting rid of the martian waves. That being said, enemy variety is pretty lackluster, as they only change in size, meaning that the bigger they are the more hits it takes to kill them, but still, there are only 3 different types of enemies.

In the end, Mars or Die! still feels like a work of passion, which makes it even more of a shame that it falls too short in terms of variety and content. The campaign will last you 5 hours at the very maximum, and the maps of each mission look pretty much the same except for the layout. The game’s setting is definitely a big bonus, but the small focus on narrative and story doesn’t help in elevating the game. Overall, it’s not a bad game, but this is not a game that I’d recommend to people as one that they must play, and, with that in mind, you’re probably better off buying it on sale if you’ve got the slightest interest in it.