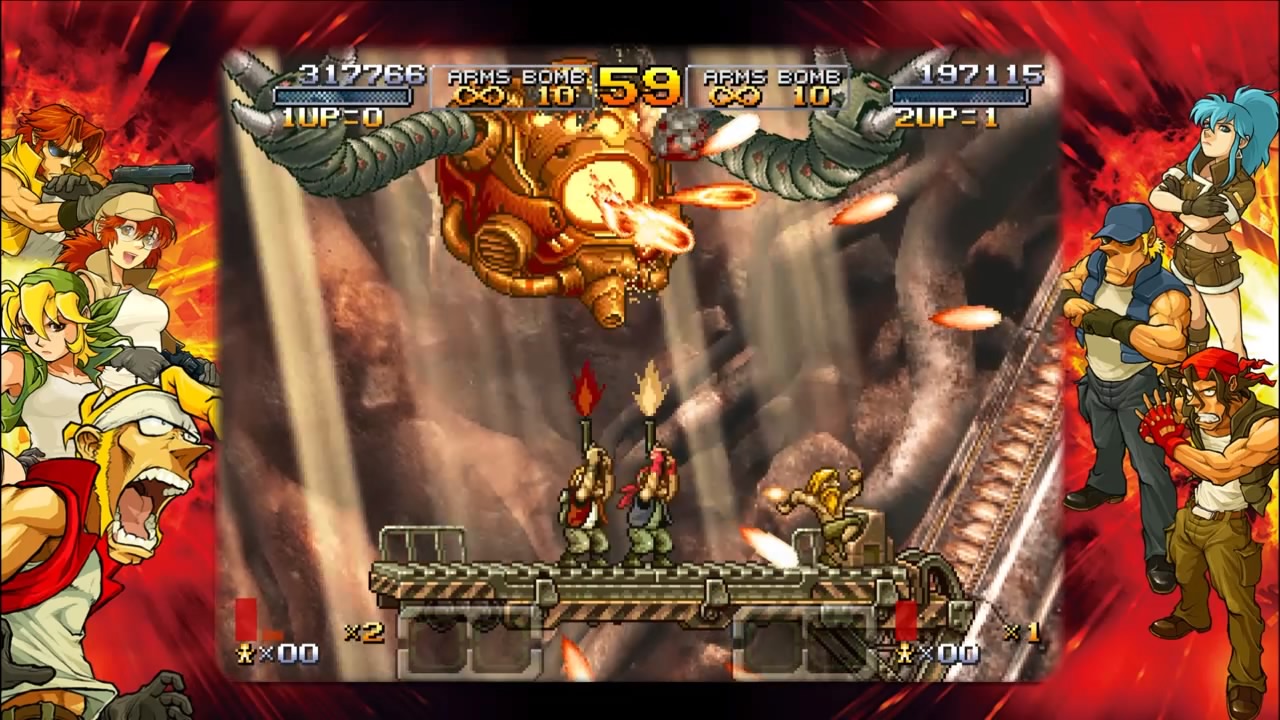 When discussing video games as a form of entertainment, many put both modern games, as well as the arcade titles of the yesteryear into the same bag. But the fact of the matter is that arcade games of the 70’s, 80’s, and even 90’s have been designed with a completely different purpose in mind, than the games to which the vast majority of is used to. Titles such as Street Fighter, OutRun, and as you may have probably guessed it, Metal Slug, have been created not entertain you, but to rinse you from your quarters, or any other coins for that matter. And for that very reason, the vast majority of such games has never been ported one-to-one onto consoles, as once the pay-to-play factor is taken out of the equation, such games are nothing more than hour-long experiences, that only a select few will value.

Metal Slug XX, or Metal Slug Double X – as some like to call it – is a tough as nails combat based, 2D shooter with implemented co-op. And just like all the other titles of the Metal Slug franchise, Double X, is an incredibly short, yet difficult game, which extends its playtime by constantly forcing you to restart. But where the arcade equivalent would require you to deposit money in order to continue, then the console port of the title simply allows you to press start in order to press onward. And while endless retries do cheapen the arcade experience, they also absolutely slaughter the single playthrough playtime of the title, as within infinite number of continues, Metal Slug XX can be completed in under an hour. 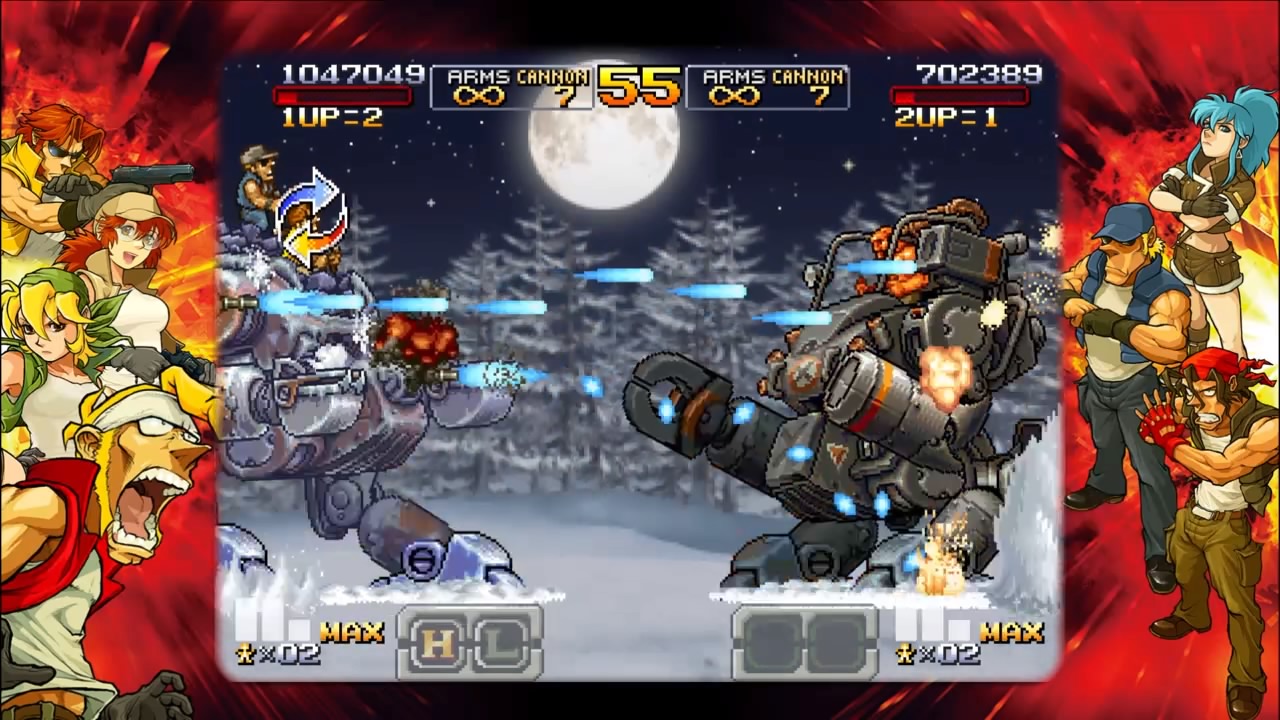 On PlayStation 4, Metal Slug XX feels and plays just like all the other installments of the franchise. It is a frantic and exciting title, which entertains you by constantly throwing at you ever new opponents, and tools of destruction. And the core gameplay loop, which in-fact never stops, is incredibly captivating as it sucks you in with the seemingly never-ending action. And while death is an inevitability throughout, then it has to be underlined that towards the end, Metal Slug XX seems to do everything it possibly can just kill you. From throwing hordes of enemies, to spawning numerous tanks and helicopters, Metal Slug XX simply swarms you with hostiles, in turn cheapening the overall experience. As many, will feel short-changed by dying to enemies which simply could not be defeated within reason – even with special weapons.

Metal Slug XX, while being a rendition of an arcade title, definitely does not provide you with a complete arcade experience. And if you ever get a chance to experience Metal Slug XX first hand, you might feel a little confused as the title at hand seems to be stuck between being a complete arcade experience and a modern console port. As on one hand, Metal Slug XX, just like the vast majority of old school ports, plays on a 4:3 surface, while being surrounded by a border featuring game related art. In addition, it still features all arcade centric features such as limited lives and the ability to continue. But on the other, it completely disregards all of its arcade components, but still disallows you from playing the title in full screen.

I’d like to say that the arcade components of Metal Slug XX have been kept in-game for the sake of authenticity, but in truth, their existence within the PlayStation 4 port, makes it feel like a cheap and hasty cash-in. Sure, some will be ecstatic about the fact that they can play the quote-on-quote real Metal Slug on their home consoles, within the comfort of their own home – whenever they desire. But others, who will invest into this title, hoping to experience the modern take on the franchise may be a little disappointed, if not tricked. And if only a little more effort went into this port, then maybe, one could even go as far as to say that it matches modern indies, but unfortunately, as you have already learned, that is not the case. 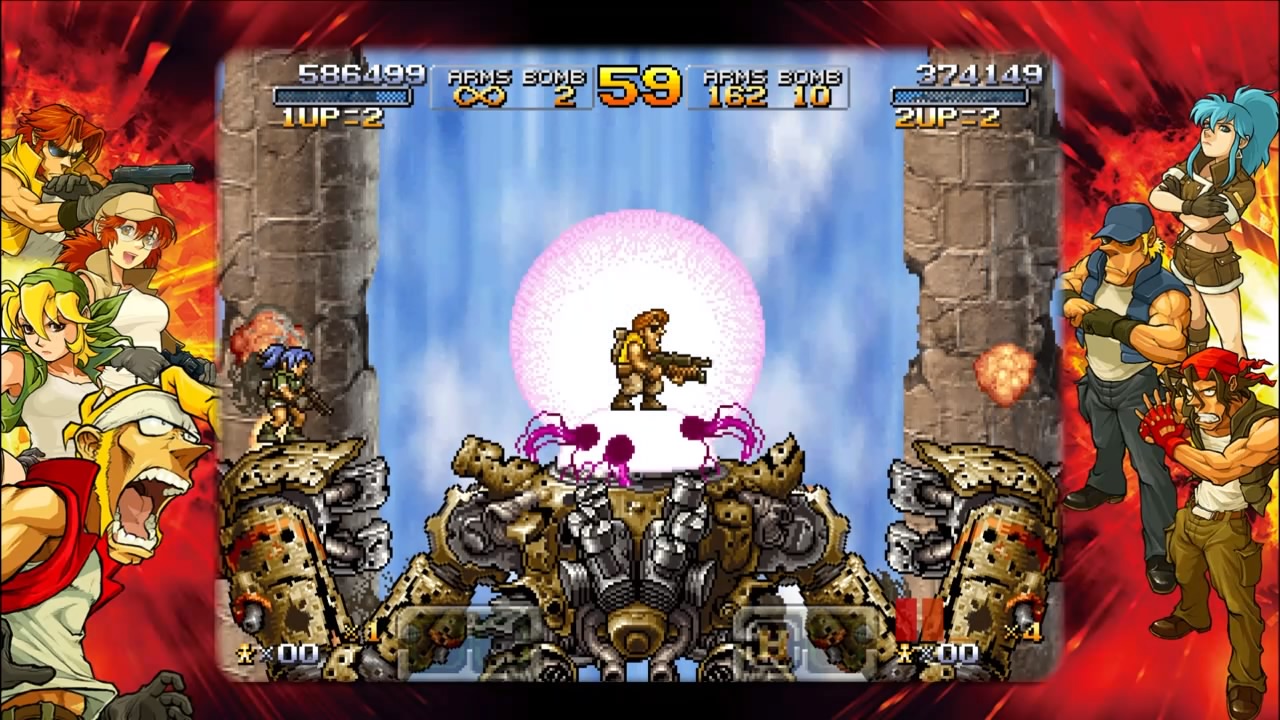 The state of Metal Slug XX is a little weird, to say the least. But what makes it even weirder is that originally, Metal Slug XX was titled Metal Slug 7, and it was initially released not on arcade machines, but on Nintendo DS. And this means that its arcade quirks are not within it because it has been ported from an arcade machine, but because SNK, the developer behind has simply implemented them out of habit. And you could argue that they’ve been implemented for the sake of authenticity, but their inclusion ultimately does more harm than good. And ultimately, Metal Slug XX feels like a game with no concrete sense of identity.

To conclude, it has to be said that despite of its flaws, Metal Slug Double X, feels and plays like the Metal Slug titles of the days of old. And most old timers, who have spent countless hours and quarters, trying to complete the original entries to the franchise at actual arcades, will love it with no end for that very reason. But those born past the destruction of the Berlin wall will struggle with the title’s muddled core, which at times can be incredibly confusing. But if you are currently searching for a game which you’ll only play while downloading and installing patches, then you might as well give Metal Slug XX a shot, as it is above and beyond the majority of modern indie games, which can be found on PlayStation 4.