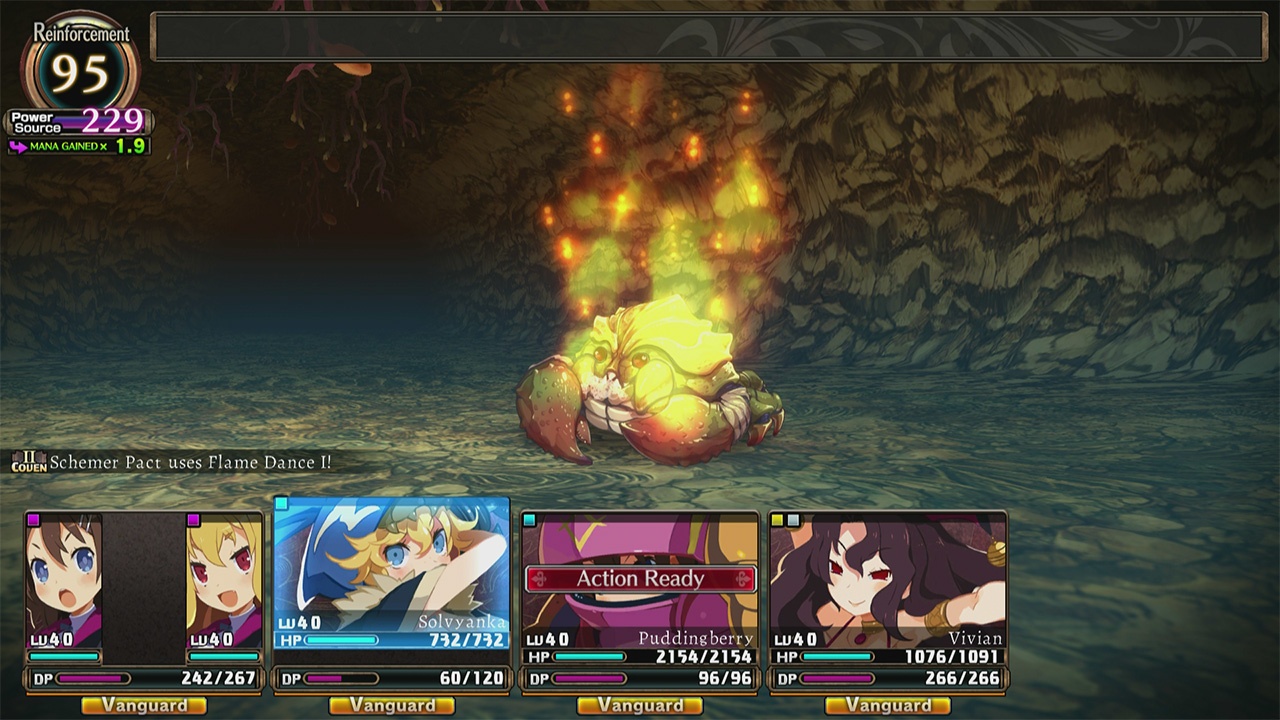 Another day and another dungeon-crawler rises from the depths to make an appearance on the Nintendo Switch. In recent months, there has been a massive resurgence of its genre, with each title bringing with it a unique twist or different take on its tried-and-tested methods. Games such as The Lost Child included the element of capturing enemy types to make up your party of adventurers, whilst Haunted Dungeons: Hyakki Castle brought with it a split-screen element that separated your party into two concurrent entities. The latest of such titles to get a release comes in the form of Labyrinth of Refrain: Coven of Dusk and although it doesn’t bring anything new to the table like the above titles, what is does contain is probably the most extensive and definitive version of its genre to date; as well as being one of the most adult-orientated titles to appear on the Switch, this is certainly no kids game with colourful metaphors and graphical depictions.

Developed by the creators of the Disgaea series, Nippon Ichi, with publishing through NIS America, this latest in a long line of dungeon-crawlers takes place in the mystical world of Tanis, where the mysterious town of Refrain resides. Hidden beneath the depths of the town, lies a large labyrinth that holds many untold secrets and treasures which are rumoured to house the powers of immortality; as well as the slumbering form of the demon king whose resurgence from the depths could spell the end of the world. However, despite many attempts to reveal its secrets, man has failed to accomplish such a task, mainly due to the presence of maisma; a cursed substance that brings death to any human who may come into contact with it.

The game begins with the arrival in Refrain, of the dusk witch Dronya, who has in her possession a legendary book, the Tractatus de Monstrum; its pages rumoured to have been inked by the only man to have explored the labyrinth and survive its horrors. With her magical powers, Dronya is able to create a coven, or party, of wooden puppets that are given the gift of life. Along with the created coven, you play as a soul who has transferred amongst the pages of the Tractatus de Monstrum, or Tractie as you are more affectionately known, and together with the dolls, you explore the mysteries of the labyrinth that lies beneath the town of Refrain; collecting its treasures and revealing the secrets that have laid entombed for many years. 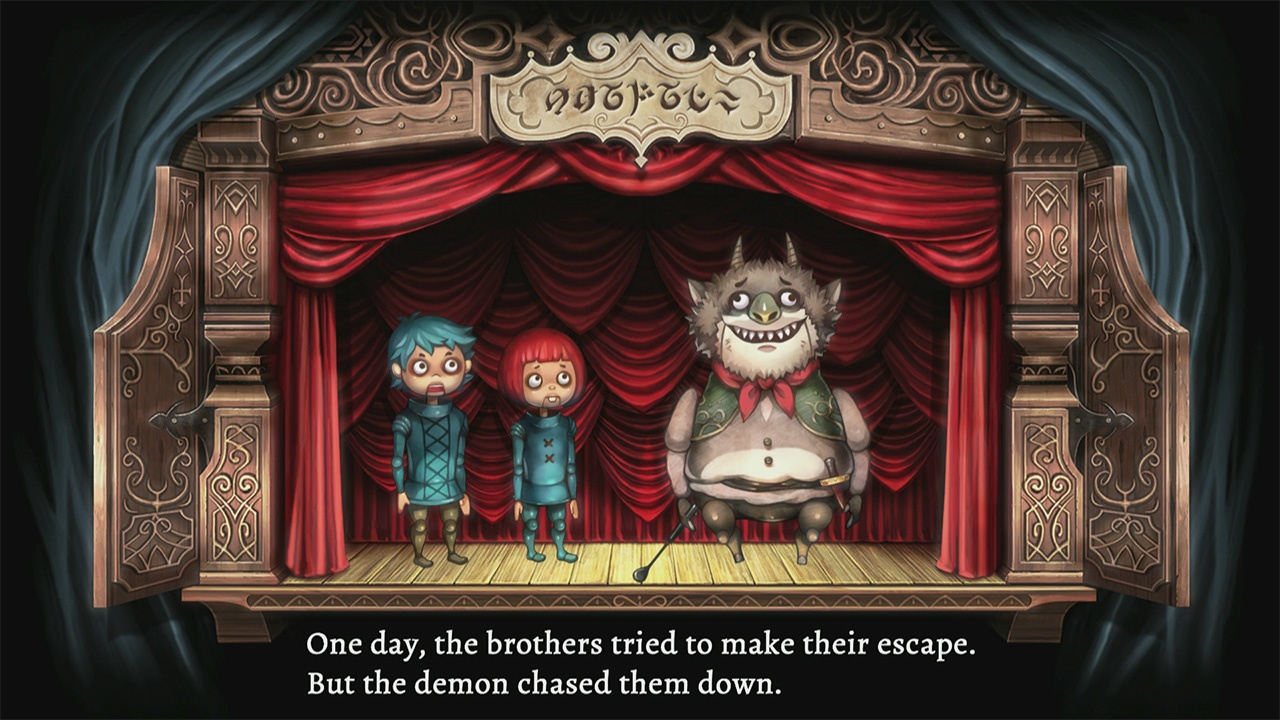 The main core of the gameplay revolves around the same mechanics of other titles before it within its genre. Viewed from a first-person perspective and traversing through the labyrinth in a grid-like fashion, you explore the region whilst collecting items and battling the various creatures that reside within its maze-like corridors and rooms. Unlike some of the other titles within its genre though, not all of your time is spent within the confines of the dungeon area, as preparing your party and triggering story advancements take place within the caravan of the dusk witch. Instead of constantly traversing the underground corridors, you make frequent visits, mapping out different floors, collecting mana reserves and acquiring treasures. Once you have accrued enough loot, or sought a particular item, you can head back up to the surface in preparation for your next visit.

Although in terms of dungeon-crawling, this isn’t a game that brings anything particularly new to the table, it does contain a wealth of depth in terms of character creation and party management. As you collect certain items within the dungeons, you can create more puppets to build up your covens, or parties; eventually leading to a potential party size of forty puppets! There’s a great deal of fun in creating party members for your explorations; with options from gender, look, naming, apparel and facets (jobs). From here, you can also determine formation stances, with heavy hitters up front and ranged or support types remaining in the defensive back-line. In terms of statistical information, these puppet creations can compose of a variety of features, as well as progression values and future skill sets.

However, despite what puppet you may create, you are also granted the freedom to change their attributes at any time you return to the caravan from your travels. This allows for a large scope of experimentation in order to build a party, or individual dolls that perform exactly how you want them to. Want tanks? You can build them; you’re gonna need them. Want healers or long-ranged attackers? You can build them too. It all adds a nice level of personalisation and customisation in fine-tuning the attributes of each of your party members to get the most effective formation within each coven. As you begin to level up your existing puppets, you get the option to transfer their souls into other models, giving further stat boosts and party capabilities to strengthen your squads. This creates a near-infinite possibility in character creations and party management formations as you delve deeper into the dungeons and face more challenging foes. 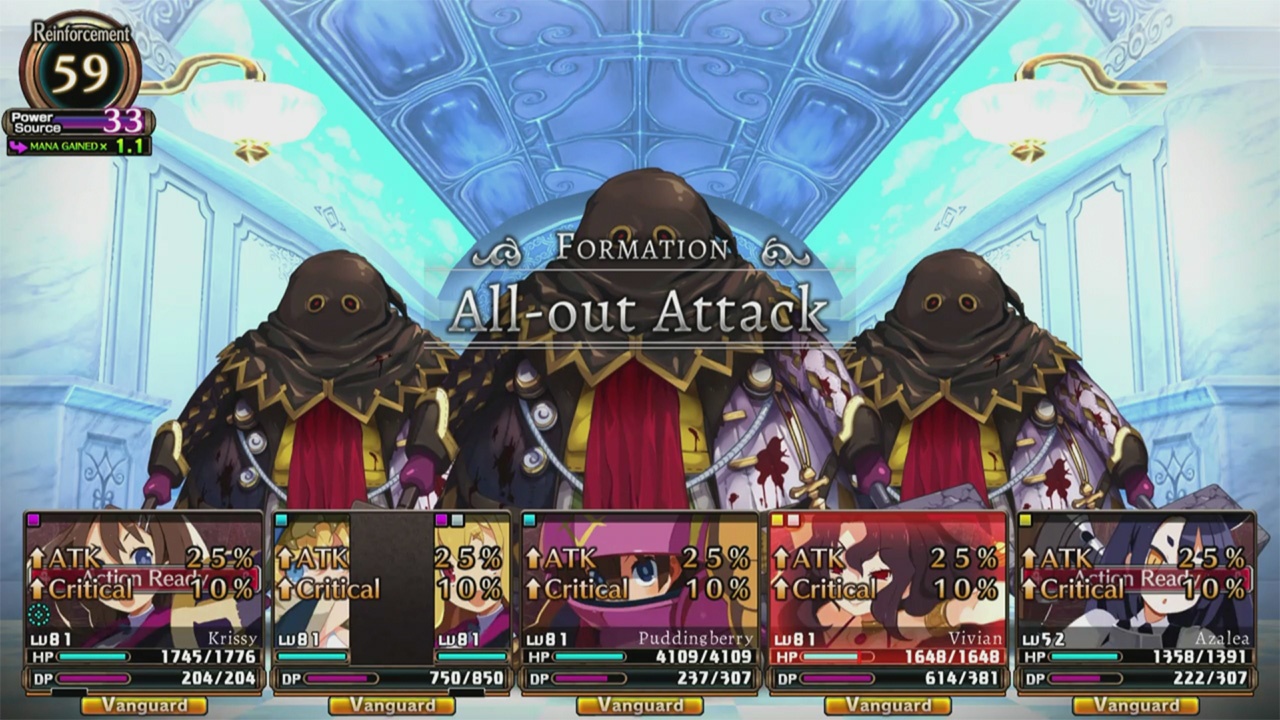 Combat takes on a turn-based mechanic, issuing commands to each party member, from basic attacks to magical, or donum, properties and defensive stances to coven reinforcements. After your selections have been made, then the battles take place until either your party or enemies health bar is reduced to zero. However, other factors can also come into play here, with resonance attacks, offensive or defensive forces and critical gores. These are essentially special moves that are utilised when specific elements have been triggered, producing heavy strikes that deal massive amounts of damage. Movement too, follows a turn-based style with monsters moving one square every time your party advances. This brings in a tactical element to the gameplay, as not only can get the jump on unsuspecting foes, but they can also surprise you if you’re not too careful.

However, as your party levels up and gains experience, you can learn new techniques and abilities to aid you in your quest. These can range from seeing item rarity values to treasures or spotting event markers and mana locations to monster movement counters; you can even learn the ability to smash through walls, opening up otherwise secret areas that leads to more valuable resources. All of these extra abilities show up on a handy in-game map which shows your progression as you explore uncharted regions. It’s a handy feature, as the various levels of dungeons are huge, often needing a number of visits to map out their entirety. Although there is a story to give the game a flow, it’s often an underused, or uninspiring element of the gameplay with semi-animated cut-scenes. However, because of the depth involved in the character creations and party management, as well as a host of expansive dungeons, this isn’t necessarily a game that relies on plots and themes to get the most out of it.

Overall, Labyrinth of Refrain: Coven of Dusk presents a fine example of the dungeon-crawling genre. Although it doesn’t contain any mechanics that are particularly ground-breaking or new, its wealth of stats and depth of gameplay options produce a game that is easy to sink your teeth into. What it may lack in certain elements, such as its underused story or theme, it more than makes up for with its pure form of playability; offering literally hours and hours of gameplay. Although it can be statistically heavy, nothing is presented in a format that feels confusing or too over-bearing in its execution; in fact, it all adds to the fun of the title as you tinker with your puppet creations and party formations to produce the most effective party you can muster. Its exploration of the labyrinth is also fun, with tactical elements and the lure of rare treasures. If you’re a fan of the genre, then this is certainly one the deepest dungeons that you’ll ever explore. However, if you’re looking for a story, then you may be disappointed. Then again, if you’re deep into the mechanics of developing stats, then this is game that is heavenly in the way it cleverly draws you into the tinkering of how your party performs. Of all the dungeon-crawling games I have played over the years, I can easily say that this particular game is one of the most involving and rewarding titles I have ever had the pleasure of exploring.

A game that you shouldn’t refrain from playing, as its labyrinths contain such depth, that you’ll find yourself lost within its gameplay for an eternity.