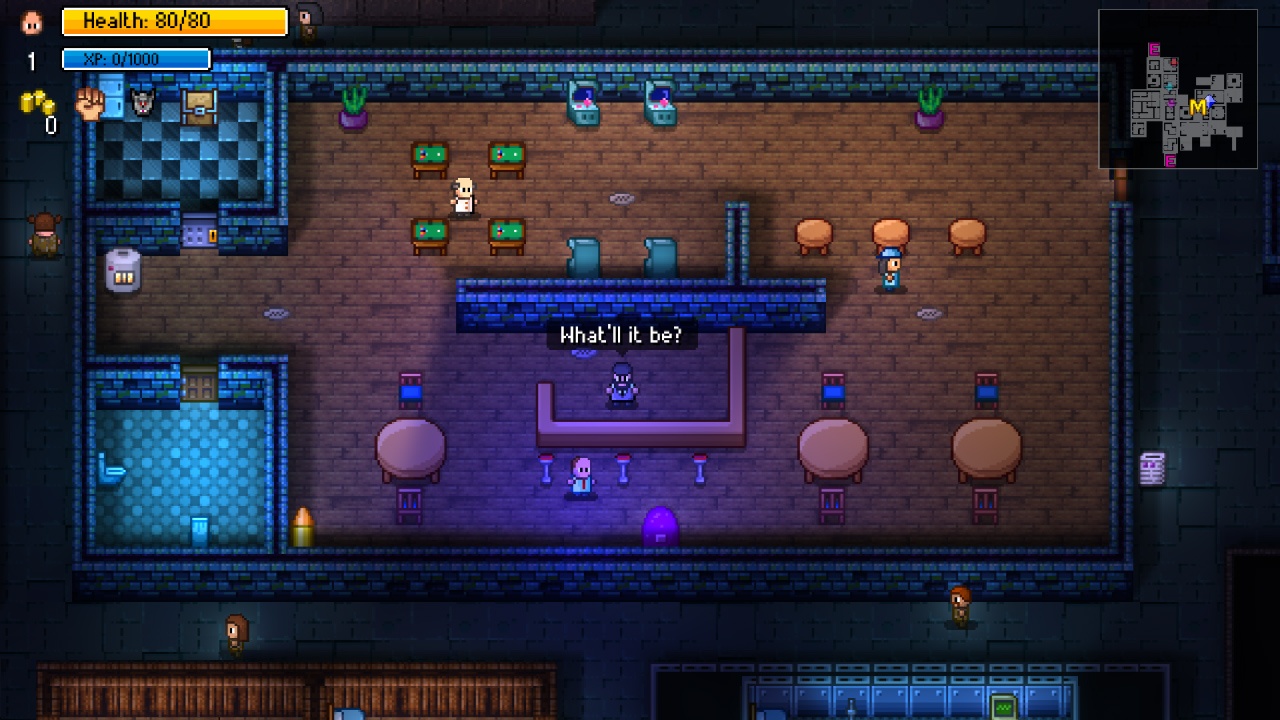 When it comes to the big hitters of console gaming, namely the Playstation 4 and Xbox One, I never found the appeal of playing indie titles on any of these machines. For me, they were console powerhouses upon which the best of Triple-A’s only needed to be played; even though I knew that indie gaming was gaining in credibility and becoming increasingly popular. I never understood the appeal of gaming on mobile platforms either, despite knowing that they controlled a large percentage of revenue within the monopoly of gaming. However, it’s only been since I started gaming on the Nintendo Switch, that my eyes have been opened to the possibilities that indie developers and their games can bring. Admittedly, I still feel that these styles of games sit better on Nintendo’s machine, but that didn’t stop me from snapping up Streets of Rogue when it released on the Xbox One.

Developed by Matt Dabrowski, with publishing through tinyBuild, this pixelated rogue-lite contains the appearance of a retro-styled title, or simply a game that contains nothing but a run-of-a-mill level of playability. However, read this, and read it clearly: Looks can be deceptively misleading. For when you look deeper into Streets of Rogue, you’ll stare into the eyes of lovingly crafted game that holds so much depth, appeal, humour and playability, that it can simply rival and even exceed the production values of my beloved Triple-A’s. Once you peel back the layers, or take the elevator to each level of gameplay, you’re presented with a game that contains a story in which you can make your own, as well as a host of features that forces you to keep playing over the long-term.

The central theme around the game involves joining an organisation called ‘The Resistance’ as they work from the depths of the slums to reach the dizzying heights of central office and put an end to the corruption of a newly-elected mayor. It creates a good, solid background to the proceedings, as there’s no central story as such, with the main premise of the game being what you can achieve as you roam the streets of the city; thus carving out a story of your own. Following a brief and hilarious tutorial, you slowly begin to unravel everything that the game holds; eventually leading to the unwrapping of a surprising gem. From the underground headquarters of the resistance, you can interact with a number of options from adjusting your loadout, buying items and perks, gaining background information and so on and so forth. In fact, you can easily lose yourself for the first hour within this setting. However, once you reach the elevator to embark on your story within the first floor, the game presents you with street-level look at the fun that hides down its alleyways and secluded streets. 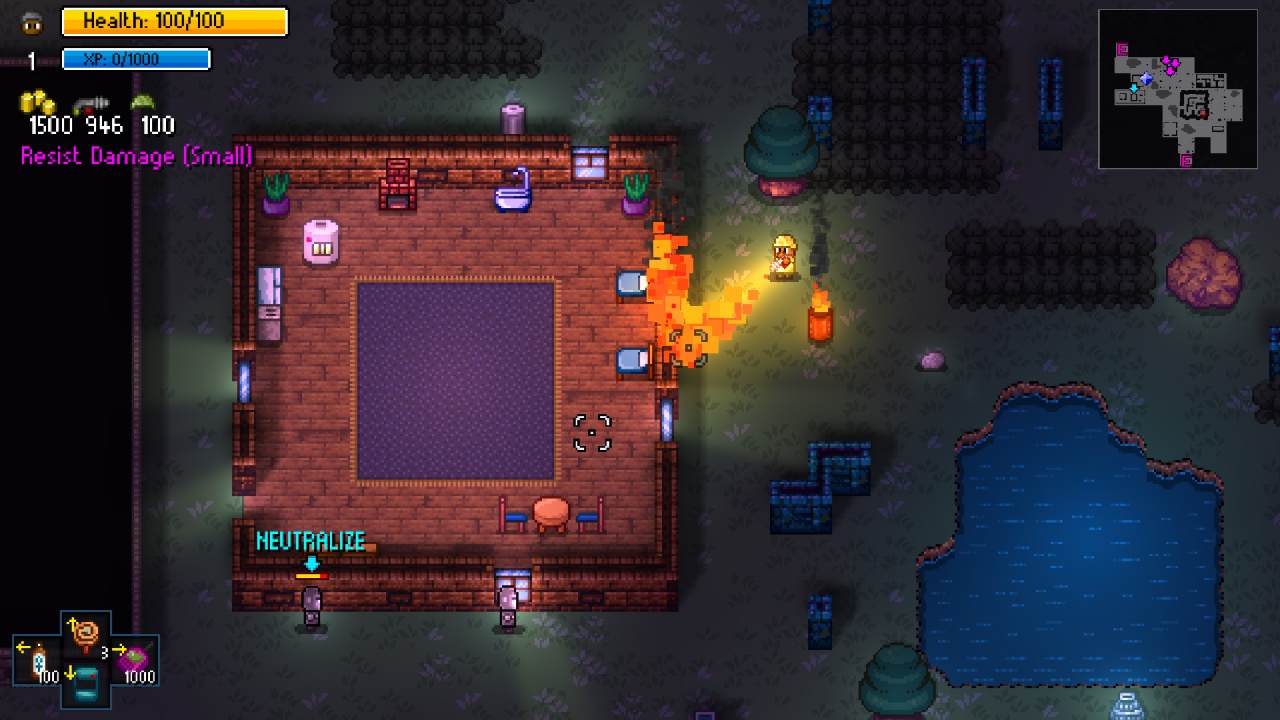 Your first call-of-duty, is to select a character for yourself. You can choose from a selection a pre-requisite forms, each one containing a whole host of special abilities and personas, or you can even create your own. However, one of the joys of this title is experiencing life on the streets with each individual that is on offer. You’ll easily find a character that suits your style of play, but also offers a nice challenge with trying out different ways of achieving your targets. Once this is done, you then take the elevator to the first street level where you simply take the city by storm.

The roguelike elements of play come in the form of the game’s structure; tasking you to work from the lower levels of the slums and taking the end-level elevator up through a series of five floors that takes you through a series of landscapes from the industrial up to the glitz of head office. Each of the levels are randomly generated, as are the mission objectives that each level holds. In order to advance to the next level, you must accomplish your tasks however way you seem fit. Fail and you have to start over. This is where the real beauty of the game lies and is also where character selection can be just as important.

With each trait that each individual holds, how you approach each task will differ from one playthrough to the next. For instance, the hacker can manipulate any electronic device to turn the tide in your favour, like turning a security system onto the very people that are guarding it. The Gangster, on the other hand, will recruit people to join his cause and create chaos in numbers or the Gorilla, yes, the Gorilla, will simply rampage through the city limits with his freed brethren. There’s so much scope to how you approach each game, that it’s simply mind-boggling.

Successful completion of tasks and level requirements, rewards you with items and chicken nuggets! Again, yes, Chicken Nuggets. That’s the hilarious level of humour that is rife throughout this game. Oh! And walking in on people when they’re using the loo, but you’ll learn all about that yourself, just as I did. Anyway, Chicken Nuggets have been banned by the mayor and are now a rare and valuable resource. However, as you accrue these morsel delights, you can trade them off within your headquarters for items that can help you immensely within the field of operation. As well as these, each level completion will also grants you a selection of one from a choice of extra abilities, such as an angry face that has the ability to scare off potential attackers. 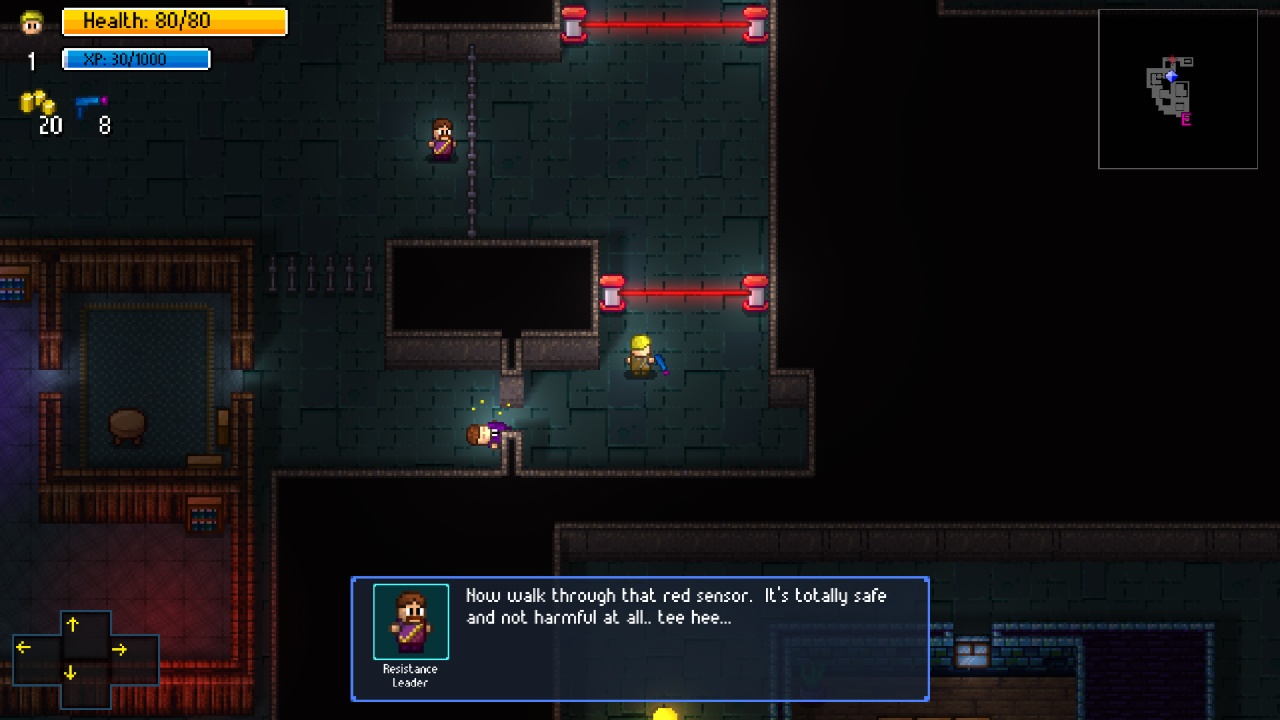 However, there’s nothing here really that makes you ever-powerful or particularly stronger. What you do get though is a variety that adds extra choice to each playthrough. Like any roguelite, your main goal is to progress through each level to face-off with the mayor himself. Get yourself killed and its back to the beginning and the choice of starting over with your chosen character or selecting a completely new one with their own distinct style. It’s this complete freedom of choice that gives the game its shine. Within each level, you’ll find yourself searching every nook and cranny for items, surveying each area to find strengths and weaknesses and scoping the landscape to work out how best to approach a given situation. It’s tense, it’s fun and it’s hilarious; providing a fine balance in the scope, choice and overall entertainment that this game has to offer.

To further bolster its appeal and long-term prospects, you can also play the game locally or online with up to four players. Team-work is the name of the game here, with some absolutely hilarious results as you all search for items and plan together on how to approach each mission. Much like the eighties TV show, ‘The A-Team’, you’ll simply love it when a plan comes together. I found that local multiplayer was more fun and exciting than its online component, as you and your friends all scream, shout and laugh with each other as you scale the city limits from floor to floor and from character to character.

Overall, Streets of Rogue is one of those little gemstones that gleam within indie games from time to time. Much like Terraria, it’s look may not appeal, but dig deep and you’ll simply find a game that you can make your own with a level of playability that can easily match any Triple-A. It contains such a level of charm, that you simply find yourself diving back into its streets time and time again and even possesses that addictive quality of ‘just-one-more go’. There are so many levels to its multi-faceted gameplay values, that you’ll spend ages experimenting with what it has to offer, but this is one of those game that you need to learn to get the most out of it and it’s in this premise that the game shines most. So, get your backsides off your couch or out of your bedrooms and go play in the streets, you won’t regret it; even amongst the Triple-A’s of the Xbox One.

The Streets of Rogue are paved with gold with this deep, immersive and ultimately, hilarious rogue-like.