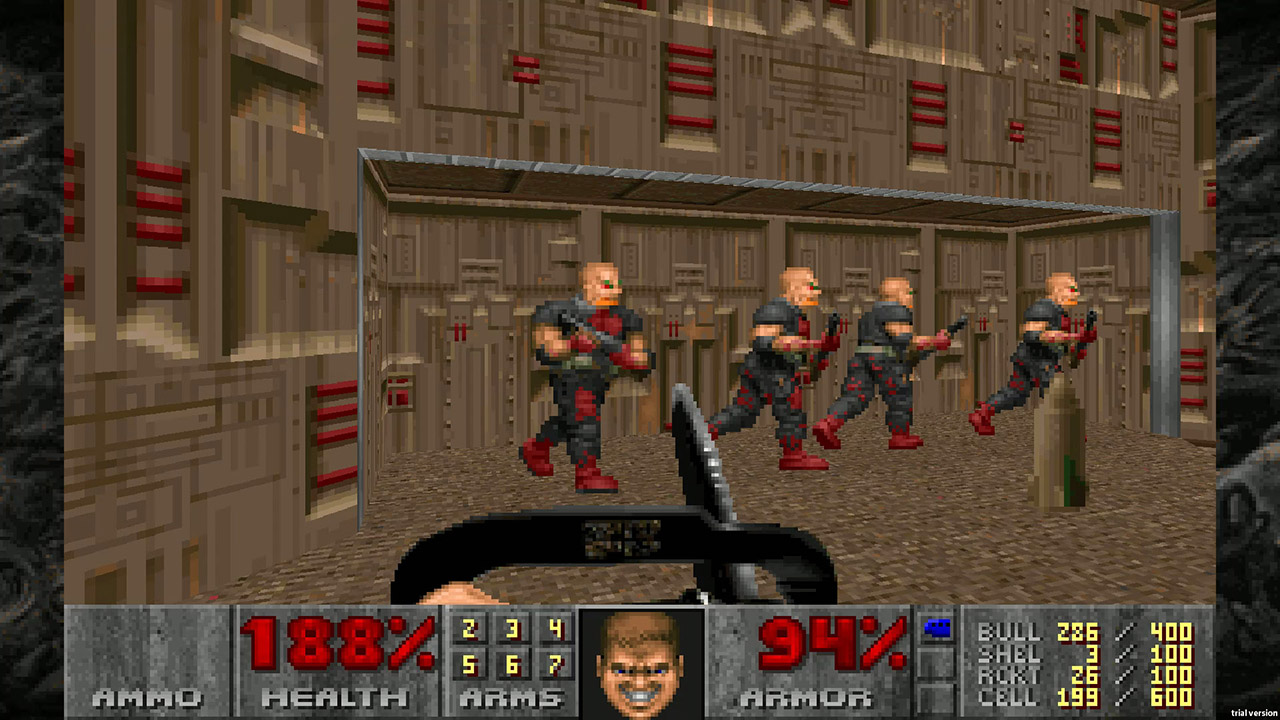 Playing Doom II is like sleeping over at a friend’s house and making breakfast in the morning, only to find out he’s got Cocoa Pebbles. Cocoa Pebbles are awesome, but wait: your friend asks you if you’ve ever put chocolate milk in with Cocoa Pebbles. What kind of demented wizardry is this? But, sure enough, you decide to go for it, and now you’re suddenly on an edge, razor sharp, and perilously high. This is so goddamn sweet, and the chocolate is so intense, but oh my God does it taste good. It tastes good enough that you know you’ll be buzzing off the sugar high for the next two hours, easily. You cannot, under any circumstance, have a second bowl, and you need to make sure you mix the chocolate milk before adding it to the cereal (and PLEASE don’t use Quik, it’s a disaster), but, with a well blended chocolate milk and eating it before things get too soggy, it’s lightning in a bottle in a bowl. That’s Doom II: an overture of improvement from the first game that almost tips into the chasm of too much, but never actually falling.

Doom II, called Hell On Earth, is a direct sequel to Doom and picks up with Doomguy returning to Earth from Hell and realizing that he’s screwed up and now demons are everywhere. I mean, screwed up is a harsh term: he did the best he could and fragged so many demons in the last game that Mars is now safe, so we gotta give the guy some credit. Anyways, humanity, in a rare show of preservation, decide NOT to stand their ground and fight to the last, but to get off of Earth and maybe try again somewhere else. Naturally, this plan isn’t going to go well, and I think it’s important to note that a vast majority of these plot points (both in the original Doom and Doom II) are taken at liberty from notes that the creators left and general interpretation from how the game progresses. If you think this plot sucks and makes no sense, just make up your own. It’s Doom, the purpose is to shoot everything until it disappears, just make it work. Hell, the Master Levels are here (20 levels created by other developers), and those don’t fit in canonically ANYWHERE, so just strap in and have fun.

Doom II has a very unique position, because everyone expected great things out of it due to its highly successful predecessor, but it also expected more of the same because changing the formula too much ruins the secret sauce. It’s like if McDonalds decided to put out a burger called Big Mac 2 and retire the original Big Mac. As long as Big Mac 2 had most of the original ingredients and maybe added something extra (bacon, anyone?) then people would love it. Doom II does it’s absolute best to stay in the same lane as the original while still adding more that moved in the right direction. Switch players won’t be able to notice the benefits of a more stable and robust online setting since Doom II also only has local multiplayer, but the expansion aspect is clear and present for all. The levels are more intricate and complex, having more dead ends, secret passages and exploration for players to experience. There’s more enemies to deal with, including some of the most iconic creations (Pain Elementals, Revenants), and, most importantly, there’s exactly ONE new gun, the Super Shotgun. Like I said, keep what already works (who doesn’t love the BFG?) and add a little more (it’s literally just a bigger shotgun). 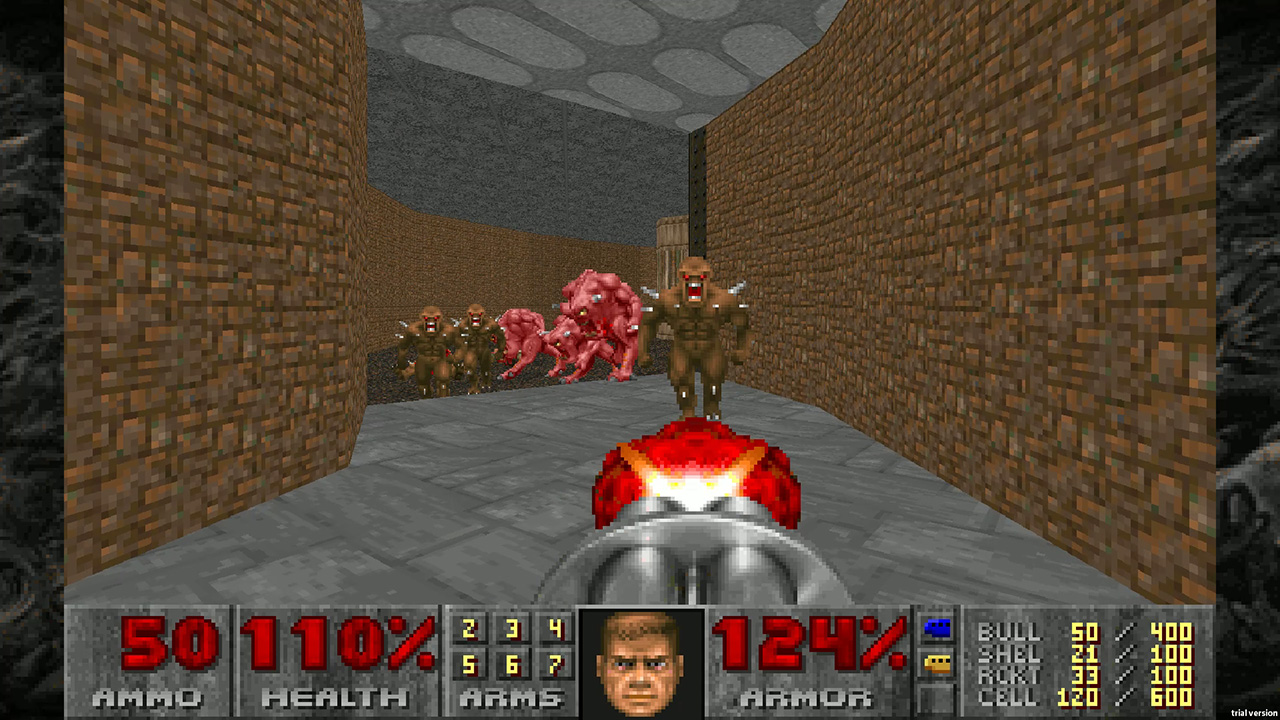 Additionally, Doom II just feels more polished in terms of what it brings to the table with the Doom formula. Especially being able to play the first and second titles back-to-back, the little things are more apparent and exciting in direct contrast. For example, the wall patterns are similar between the two games, with just a bit more variety in the color palettes and “textures” in what you see between the different worlds. As a result of the levels being bigger and more detailed than the previous maps, there’s a certain spectre of gameplay and conscious decision making that now haunts the halls instead of just the regular “brute force” approach that made Doom so delectable. Players begin to realize that ammunition is limited, and not every single enemy needs to be fragged in order to advance, so now you have to start making choices as to where to go, when to turn, what order things need to be accomplished in. With the original Doom, the only “order” you needed to consider was the official order in which different color keycards needed to be obtained. Doom II asks you to think about how you’d like to approach the levels, and memorization of drops and item locations creates real strategy for running through quickly and getting the drop on Chaingunners before they even know you’re there. Don’t get confused, this isn’t Dishonored or something like that, Doom II still solves all its problems with a cataclysmic explosion. But, if you actually care about speedrunning and things like that, Doom II turns into a thought exercise instead of just endless violence.

Doom II does make the most of what it has and makes it better, there’s simply no discounting that. The game runs smoother and looked better than Doom, with some upgraded sprites for familiar enemies and more interesting variants being introduced in this secondary game. Spawns have a greater variety within them, testing your mettle with combinations of ranged and melee attackers, some coming out of the walls at the last possible second. If the first Doom was “scary” in the way you could get attacked at the drop of a hat and end up pinned down under fire, the second Doom is downright frightening, using light and sound elements to turn the tide of luck and success in a hot second and leaving you drowning in your own organs.The death animations of the newer monsters (particularly the Revenants) are more horrifying and stick out as a bit more “ghastly” in terms of execution. 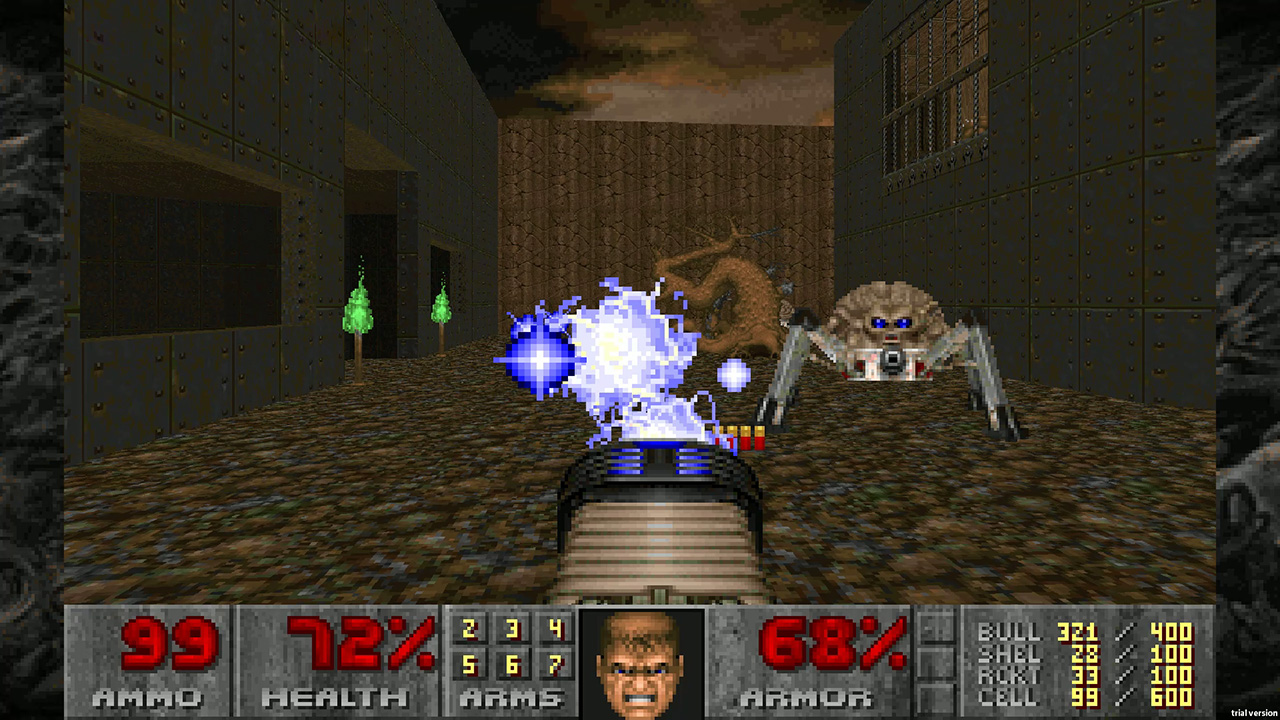 Also, the inclusion of the Master Levels here really makes for a grand excursion for players who feel like they need more “potential” out of Doom II. The Master Levels are a series of challenges that put players in constructed levels that are absolutely fiendish, devious and delightful in design, and they were both a launchpad for some and a nod of acknowledgement for others. The late, great Dr. Sleep, who created five of these twenty maps, went on to make so many other levels for the Doom series, as well as write quite a bit about his process and, oh yea, made levels for Blood, one of the best FPS’ from back in the day. Not only was this a great bit of extra stages that were sanctioned by id Software, it gave hope and inspiration to homegrown designers who were tinkering around with their own maps and ideas that they might get taken seriously in a greater scope than the fan community. This also seems as good a time as any to remind players that Chex Quest 2 was also a thing, and could also be a welcome addition to the future updates. I mean, if Bethesda is already going to push the update to remove the mandatory login to the Bethesda accounts, why not ADD something, like the fight for a healthy breakfast?

One last note I want to touch upon is the authentic, old school feel that Bethesda has allowed to remain within Doom I and Doom II. When the game loads up, despite the flashy screens for the companies that worked on these ports and the original games, I’m able to skip them by mashing the A button and get right into the main menu. This might seem like a small thing, but so many games nowadays ask you to sit and watch their company’s logo load, time after time, before you get into the game. I know who worked on the game after the first time, please let me get into the meat of it all! Bethesda somehow knew this meant a lot to me, and, at least for Doom I and II, let me skip and dive right into the game. Fantastic. I don’t even care that I can’t do online multiplayer (because I know I’d get melted in the face). This is such a grand adventure and departure from other games that I’ve been playing recently, and, holy cow, it was only five bucks. We can make five bucks happen, right?

One of the best fragging adventures of all time, bar none.